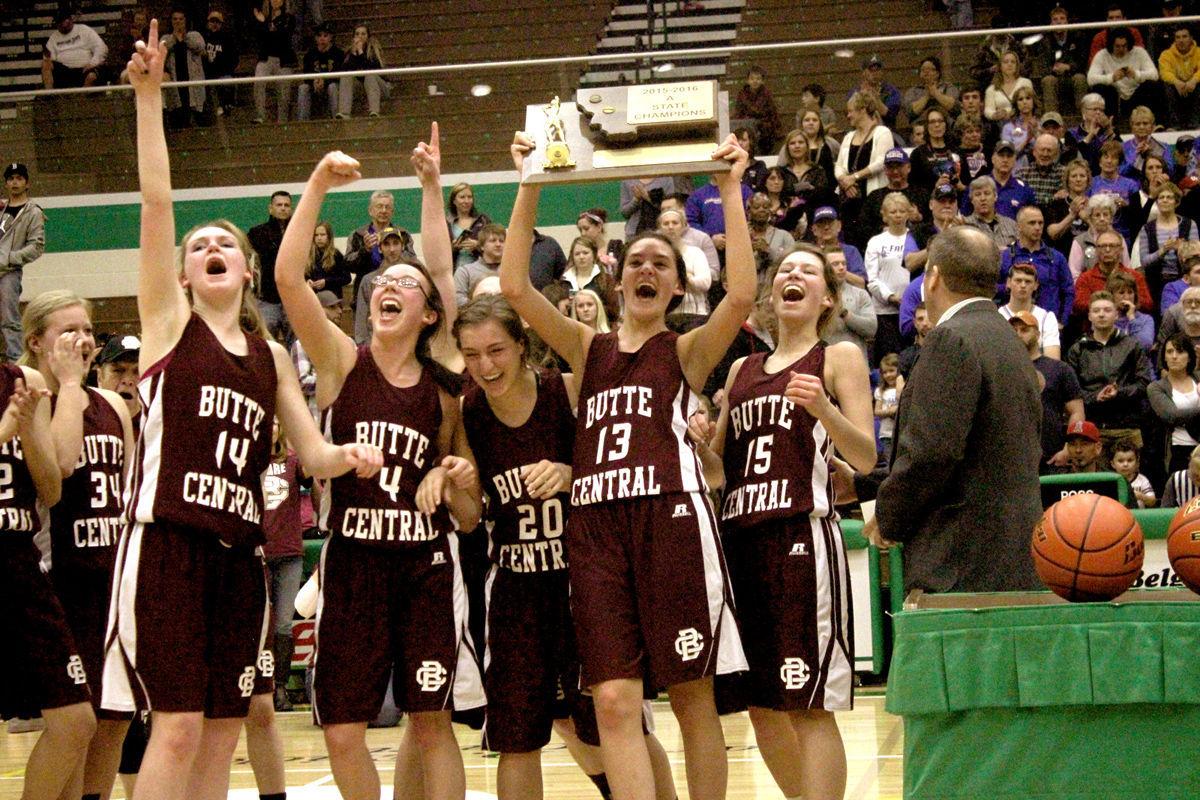 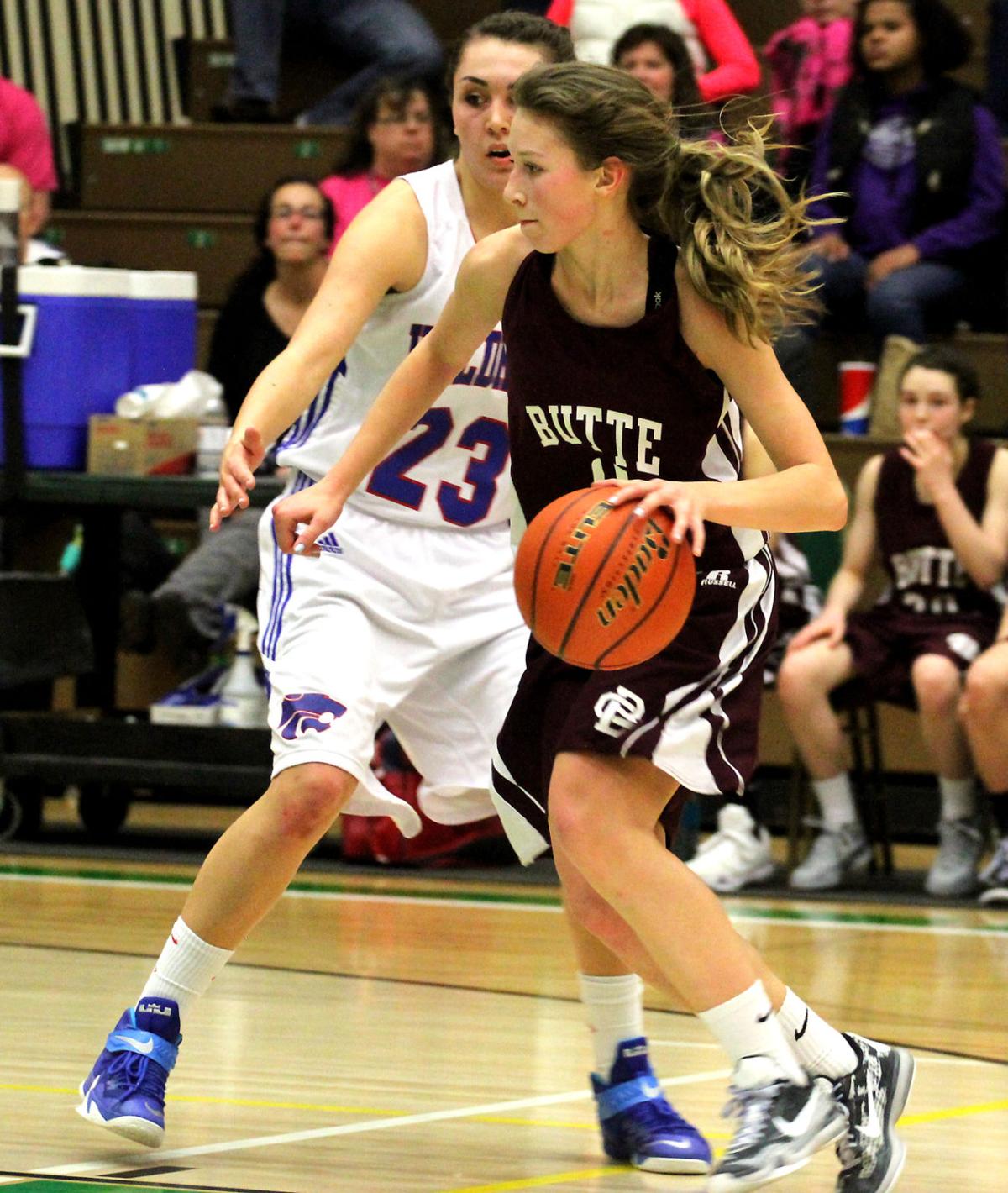 With a few seconds still left to play in Saturday night’s State Class A championship game at the Belgrade Events Center, a handful of Maroon players started to celebrate.

The final seconds ticked off of the clock, and the real celebration began.

The Maroons earned their first state championship since 2011 and put their names in the Butte Central record book for being the first team in the program’s history to go undefeated.

“I love to see kids experience a state championship,” said Butte Central coach Meg Murphy. “Experiencing one, and my other coaches can attest to it, that it’s the greatest feeling in the world. It’s the one thing in life no one can every take away from you.”

Murphy would know, since she has won state titles as a player and as a coach.

Saturday’s finale was no different than the rest of the season. It came with challenges.

The Maroons knew they were going to have their hands full because they had to go through the same Columbia Falls team in the Western A Divisional Tournament two weeks ago. They trailed early in that game but prevailed by a 51-41 margin.

Just like in the previous game between the two teams, Columbia Falls wasted little time in taking the early advantage by forging an 8-4 lead midway through the opening quarter.

The Maroons were having none of it. Four Central players contributed to the first-quarter scoring in which the Maroons were able to take a 14-10 lead.

Kloie Thatcher provided the Maroons with their first lead of the game with a 3-pointer. Another 3, this time in the quarter’s final minute, gave Central its four-point lead.

The Maroons had an early advantage in that they were hitting their shots from the outside as well as from inside of the paint.

Sierra Pica had 10 points by halftime and finished with a game-high 19. It was her final game. Kate Ossello’s too.

“She was going out with a blaze of glory for herself,” Murphy said. “She wanted this more than anything. She’s a kid that’s been to the state tournament three times so it’s a great, great thing for her.

“We have two seniors on our team. I can’t tell you the difference it makes in leadership from last year. Ossello had a huge night last night. Unfortunately Columbia Falls is so big it was hard for her to defend against them. She is so important to this team, along with Pica. She’s the one that gives inspiration to Pica.”

Pica was all but unstoppable in the paint, grabbing rebounds and setting herself up for second-chance shots. She got hit in the face in the first half and might have broken her nose but Murphy said that nothing was going to get Pica out of the game.

A 3-point basket by Mollie Peoples to start the second quarter opened up a 17-10 lead but the Maroons knew that the Wildkats would find a way to get back in the game. They were right.

Peyton Kehr and Cydney Finberg hit 3-point baskets to trim the Maroons’ lead to 21-19 late in the first half.

If the Maroons were in need of some momentum at that point, it came courtesy of Emily St. John and Thatcher.

St. John was fouled while driving to the basket with 1.8 seconds left in the second quarter. She made the first shot but the Maroons regained possession when the rebound went out of bounds off of a Columbia Falls player.

The Maroons had 0.7 seconds left to try something. That something was getting the inbound pass to Thatcher, who flung a fall-away jump shot from behind the 3-point line. The ball bounced twice on the rim before falling into the basket as time expired. Thatcher was mobbed by her teammates – and coaches – as the teams left the floor, with Central using the four points to increase their lead to 27-21.

Columbia Falls fought its way back and tied the score at 38 with 2:03 left in the third quarter but a 3-pointer by St. John and pair of free throws by Peoples kept the Maroons in front.

The Wildkats’ last chance came with 4 minutes left in the game, after Allyson Gimbel’s layup made it a one-point game.

No worries. Peoples and Pica hit consecutive baskets for the Maroons, eventually forcing the Wildkats to settle for second place.

“There were definitely some bumps in the road but we stuck together and we got through it as a team,” said Peoples, who finished with 12 points. “It’s just an indescribable feeling being here. I wouldn’t trade this team for the world. I love this team.”