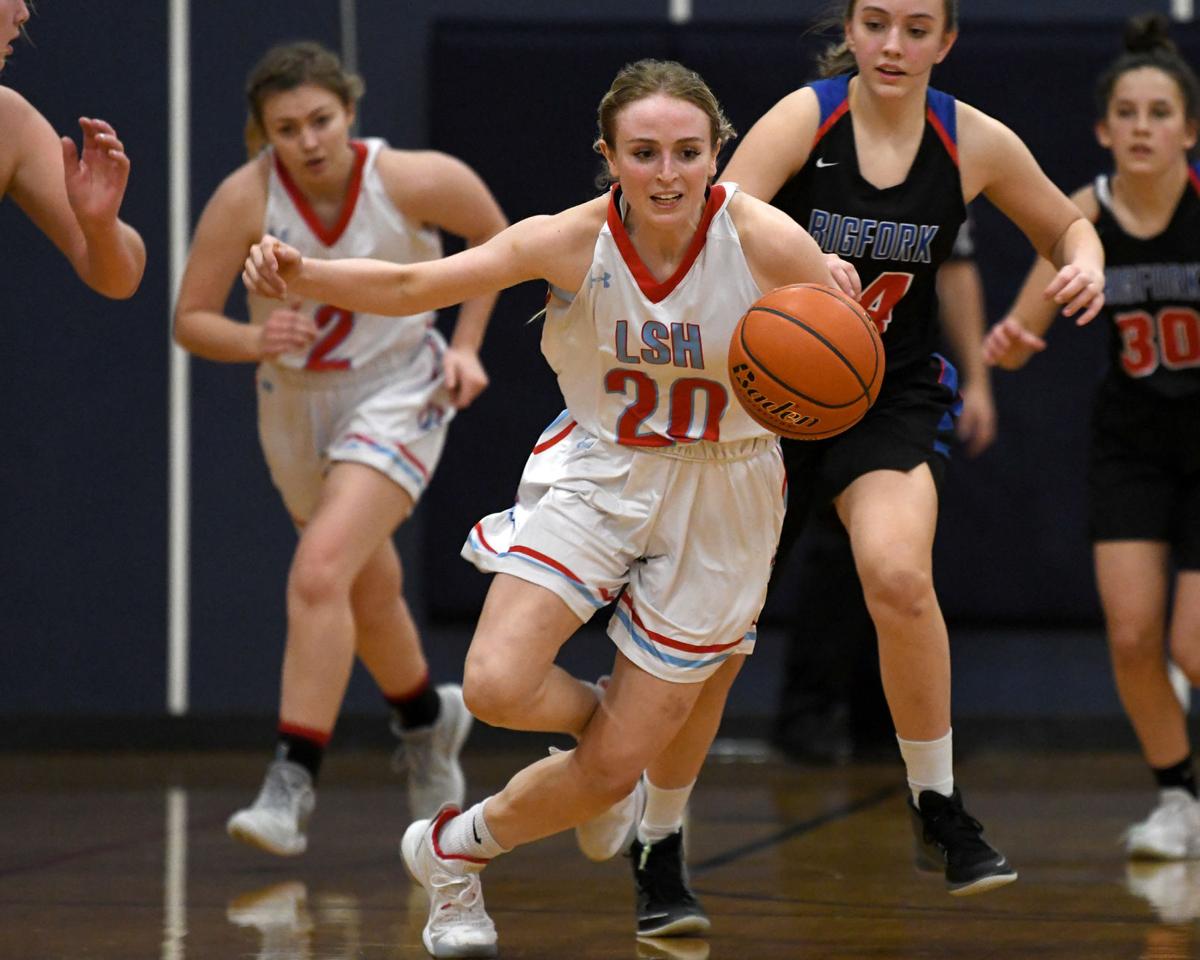 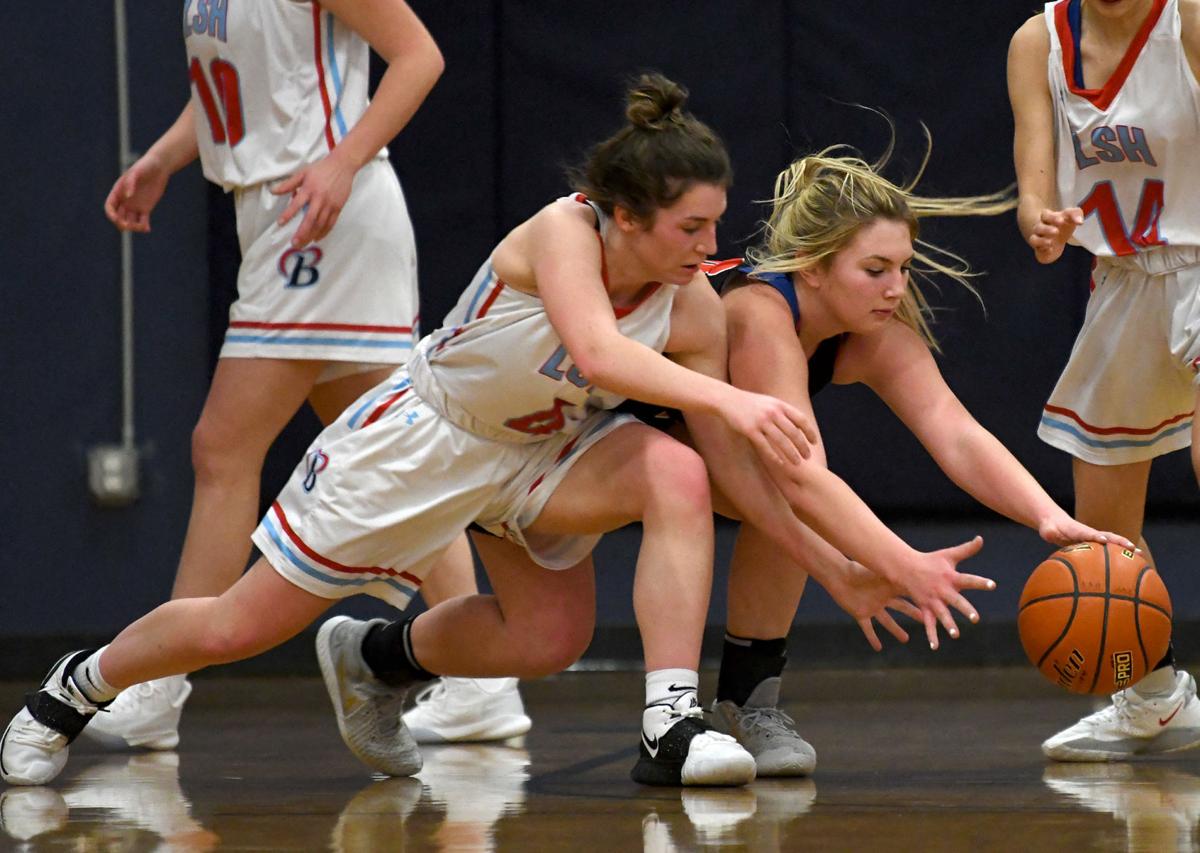 MISSOULA — Kelsey Esh got some good news as December approached: The Loyola girls basketball team was going to be playing its season despite the pandemic.

The Breakers senior got some even better news when the calendar reached Dec. 2: her sister Kylie Esh was cancer-free after being diagnosed with a rare cancer several months earlier.

“Over the summer, when I found out, it was just a lot to handle. We had some open gyms as a team, so it was nice to have my teammates there for me,” Kelsey said after sixth-ranked Loyola rolled to a 72-38 home win over Bigfork in a Class B non-conference game on Tuesday.

“But it was definitely a lot of weight off my shoulders to get that good news. We’ve always been really close. She’s like my best friend.”

Any timing for a cancer-free diagnosis is ideal, but this was fortuitous for Kelsey and the Breakers. They needed her to take her game to another level after they graduated three seniors from a team that went 25-0 last year to finish as the State B co-champions.

Kelsey has delivered on that with larger roles as a leader and scorer after being a second-team all-conference pick last year. The 5-foot-7 guard ranks second on the team with 123 total points, and she’s not afraid to be a speedy, physical defender. She showed she could do a bit of it all with 13 points, six rebounds, two steals, one assist and one block against Bigfork.

Even better, she’s getting to show off her improvements with her sister in attendance at home games after Kylie was cleared of synovial sarcoma, a soft-tissue cancer, in her abdomen. The sisters had played together for one season at Loyola before Kylie, a state champion golfer, went to golf on scholarship for the Montana Grizzlies, who will be beginning their season next month.

“Kylie actually played for me here when she was in high school and was phenomenal,” Loyola coach Travis Walker said. “If there’s somebody with her mental toughness, with playing the game of golf and sinking those putts, which she always does, she’s just so mentally tough.

“And there was no doubt with Kelsey that she hasn’t wavered one bit. She’s relaxed. She’s smiling. She’s doing phenomenal. She obviously loves, absolutely adores her sister. They are really close, which is what you would hope.”

Kelsey’s improving play is one reason for the Breakers’ success as the postseason approaches. Junior Lani Walker, a two-time all-state selection, leads the team in scoring yet again and had a team-high 17 points against Bigfork. Junior Natalie Clevenger is averaging double-digit scoring in her first year as a full-time starter.

Seniors Brooke Twite and Laney Denning have also stood out to Travis Walker with what they can do besides scoring. And the Breakers are developing a bench to give them more options.

“I think we’re finding our identity,” Travis Walker said. “It’s a group that is still getting better. They’re still really eager to learn. They always ask great questions. I think the girls trust themselves now, trust each other. I think that’s a big thing to get in that rhythm. They’re getting there.”

With no district tournament this year, the Breakers are slated to be the No. 2 seed from the Western 6-B in the divisional tournament. It’ll be a tough tournament with at least four teams — Loyola, Anaconda, Thompson Falls and Eureka — capable of winning the two berths to the state tournament.

The Breakers will open the divisional tournament against Bigfork on March 3. It’s long layoff following their regular-season finale on Saturday, but it’s a stretch that gives them ample practice time after they split with Bigfork in the regular season and were swept by Anaconda.

Bigfork won at home on an emotional senior night in January. On Tuesday, Loyola used runs of 13-0, 17-0 and 14-0 to beat Bigfork, which was missing three starters — Emma Berreth, Audrey Buenz and Scout Nadeau — as they were resting to heal from injuries, Bigfork coach Courtnee Gunlock said.

Loyola won’t finish undefeated like last year, but they’ve been able to learn from each loss and bounce back with a win the next game. Besides, a couple of basketball loses are nothing for Kelsey after seeing her sister fight through cancer amid a pandemic.

“I think we’re at our peak right now, but we still just keep getting better and better and play our best games against the best teams,” Kelsey said. “Just the fact that we’re even able to play, we don’t know if we’re going to get canceled just because of COVID, so I think we’re all happy to be together and get this time together.”