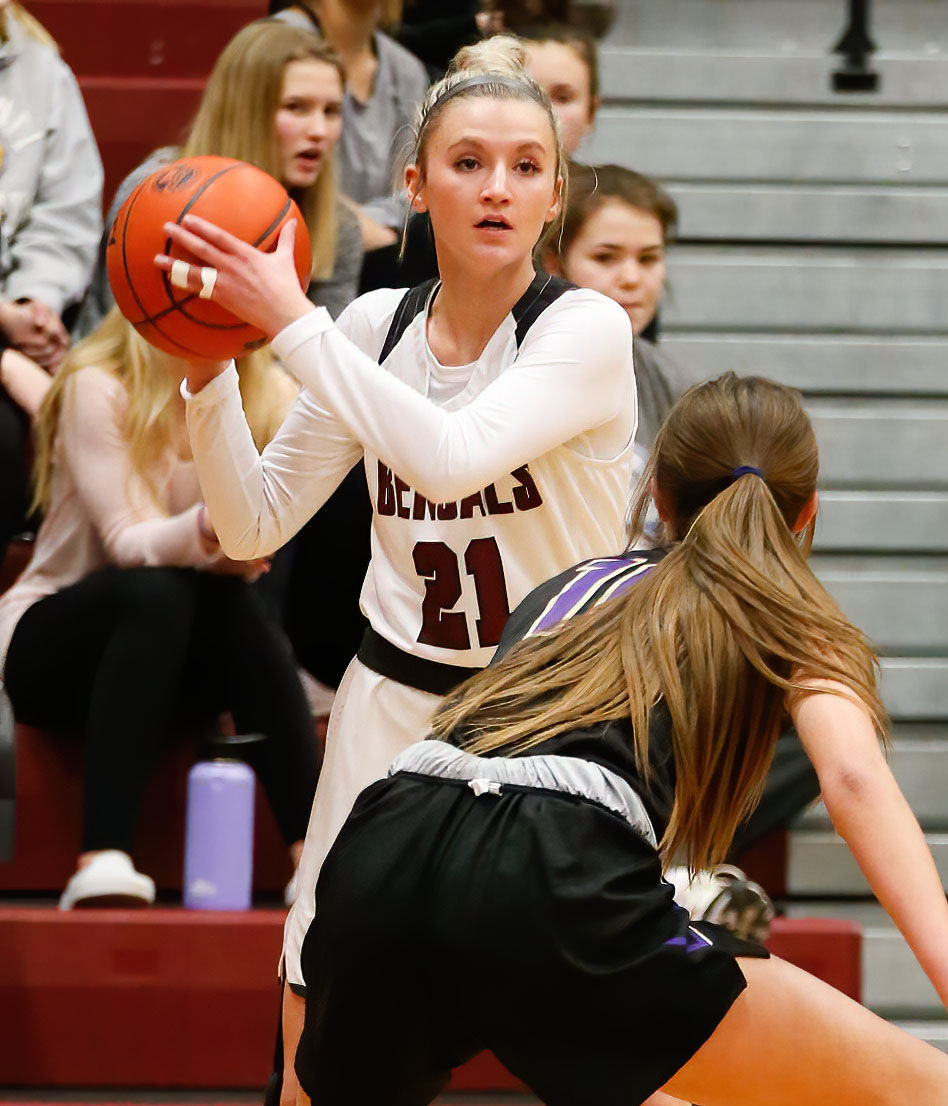 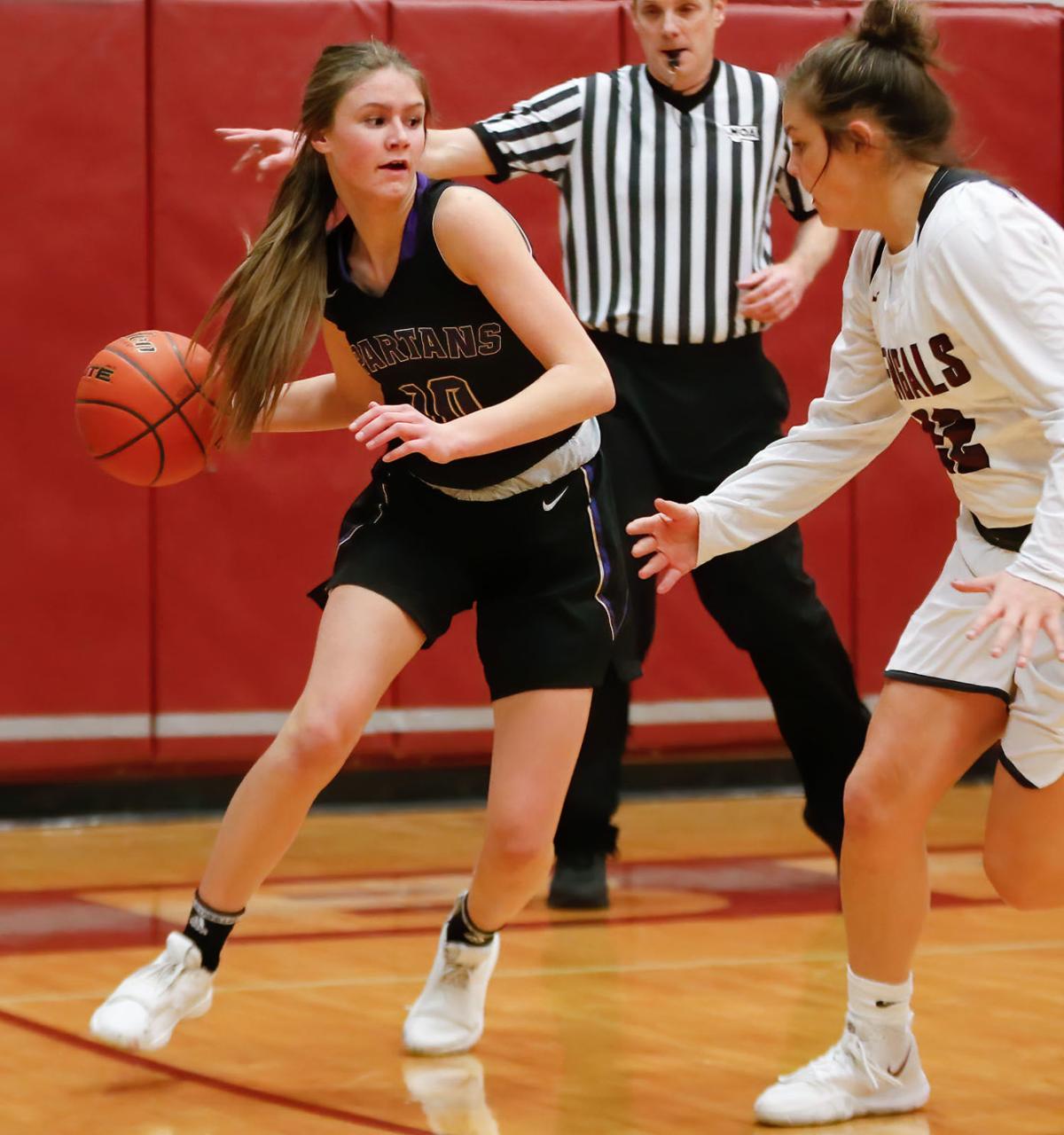 Missoula Sentinel’s Kodi Fraser rebounds a Helena High attempt during Thursday’s game in Helena. The Spartans held off the Bengals to win 60-47.

Missoula Sentinel’s Kodi Fraser rebounds a Helena High attempt during Thursday’s game in Helena. The Spartans held off the Bengals to win 60-47.

HELENA — Devastating teams as the underdog has been pretty common for the Helena High School girls basketball team of late.

Just last week, it took down Missoula Hellgate on its home court.

But the Bengals couldn’t catch lightning in a bottle for the second time in consecutive games.

Missoula Sentinel walked into Helena on Thursday night and left with a 60-47 win.

“We just can’t win basketball games giving up 60 points,” Bengals coach Eric Peterson said. “We have to be better on the defensive end.”

The Spartans (12-2) jumped out to a 7-2 lead in the first two minutes but, after a timeout, Helena went on a rally that was started by Emily Feller.

Minutes later, a 3-pointer by senior McKayla Kloker gave the Bengals an 8-7 lead.

“She is really quick,” Peterson said of Kloker, who finished with 13 points. “She is a great player.”

Sentinel found its identity earlier this season by implementing an aggressive full-court press that helped it regain some momentum as time was ticked down in the first quarter.

Three straight field goals by senior Lexi Deden and a 3-pointer by Jayden Salisbury gave the Spartans a little breathing room and a 15-8 lead.

“Defensively, the kids did exactly what I wanted them to do,” Sentinel coach Karen Deden said. “Our biggest key tonight was our defense.”

While Peterson said there were times that he saw a fire from his team that came from the upset win over Hellgate, he is still looking for consistency, both on the court during games and in practice.

“The confidence issue is a hard thing,” Peterson said. “It’s one of those things where we put each other in good spots, but it’s hard sometimes.”

Sentinel’s momentum carried through the second quarter as sophomore Brooke Stayner kept finding a path to the basket.

She scored nine of her 13 points in the first half, and the Spartans extended their lead even more to go ahead 30-18 at halftime.

But, while the Bengals (6-8) were looking up at their deficit, their spark did not go out.

Down by as much as 17 points with about six minutes left in the third quarter, Kloker reignited the offense, stealing the inbounds pass on two separate occasions for easy scores.

Her second 3-pointer of the game brought Helena within 10 points.

Riley Thennis added a bucket just before the horn sounded, and the Bengals outscored the Spartans 17-8 to end the quarter.

“Helena is a really hard place to play and the kids know that,” Karen Deden said. “They are coming off three state championships.”

Helena got within eight points early in the fourth quarter, but that was as close as it could get.

The duo of 6-foot-1 Deden and 6-2 Challis Westwater pounded the ball inside and, once again, the Spartans brought their lead up to a 55-40 advantage.

The Bengals put one more run together as Lantz hit a 3-pointer to cut it down within single digits, but 59 seconds was not enough to pull off a comeback.

“We would go on spurts and everyone would start cheering one another on, but then it would stop,” said Lantz, who finished with a team-high 13 points.

Feller and Caroline Bullock also ended the game with nine points a piece for Capital while Lexi Deden led all scorers with 17 points.

Helena will now travel to Missoula Big Sky before finishing out the season with three consecutive home games.

“We just need to string together a couple of games,” Peterson said. “That’s all we need, but we are running out of time.”

Sentinel, on the other hand, also returns home to face Helena Capital to start a four-game home stand.