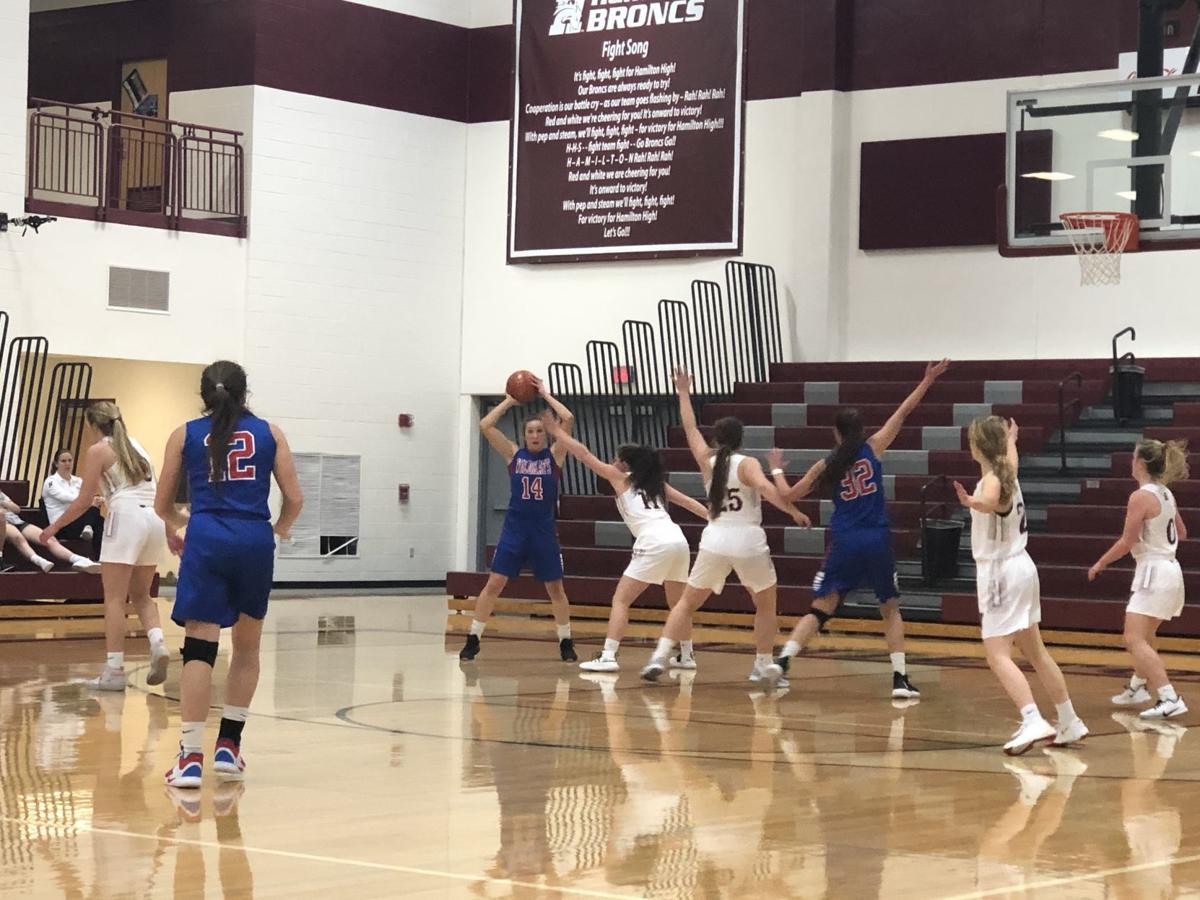 Columbia Falls senior Josie Windauer (14) looks to pass the ball in the Wildkats' 56-32 win at Hamilton on Saturday. Windauer is a Montana Grizzly soccer signee who's helped led Columbia Falls to a 9-1 start on the hardwood. 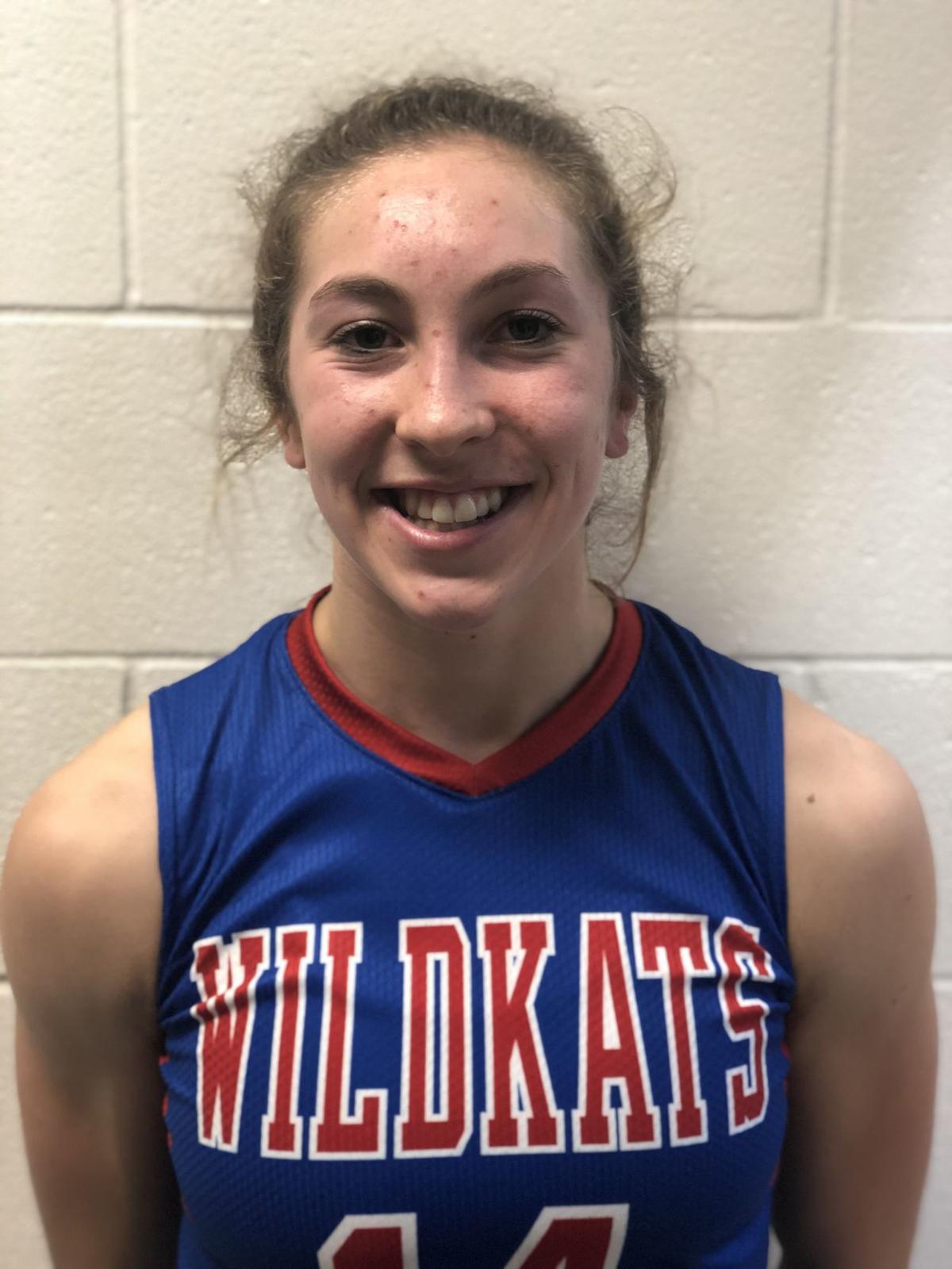 HAMILTON — Columbia Falls senior Josie Windauer felt down for a bit when her high school soccer career ended short of a state championship, which was won by Laurel, a team the Wildkats beat during the regular season.

Windauer, a Montana Grizzly soccer signee, soon turned her attention to the hardwood, eager to play alongside her basketball teammates for the final time as Columbia Falls tries to return to the top of Class A and win its first title since 2017.

“I was pretty disappointed after the soccer season but knew that everyone gave it their all,” Windauer said after the Wildkats improved to 9-1 with a 56-32 win over Hamilton on Saturday. “We had a good season, but when soccer was over, I was really excited for basketball.”

Windauer’s main skill on the soccer field is her finishing touch, as evidenced by her school-record 83 career goals, 33 of which came in 2019, the latter being just four off the all-class single-season record. The 5-foot-9 forward can also find the net on the court while doing a bit of everything down low, not afraid to initiate contact as she tries to establish positioning.

Windauer scored 13 points in the win over Hamilton, mixing together a turn-around jumper from the block, a baseline jumper, a turn-around bank shot from the left block, three layups and one free throw. Earlier in the week, the Wildkats’ captain and lone senior starter scored a season-high 19 points and grabbed 13 rebounds in a 48-35 win over Class AA Kalispell Flathead.

As opposing players key on Windauer, she’s able to display her passing skills, like dishing out four assists in the win over the Broncs. She also grabbed two rebounds.

“She plays hard every possession,” Columbia Falls coach Cary Finberg said. “She doesn’t take a play off. She plays hard. She plays physical. You ask her to do something, she tries to do it and corrects it if she has to. She’s a coachable kid. We’re happy with the progress she’s made.”

Finberg has seen a variety of talented athletes come through the school in his time there. He won five state titles coaching the boys from 1994-2015 and has coached the girls since 2012, holding dual duties from 2012-15. His girls teams have placed at state and won 20 or more games for six consecutive seasons, going 145-16 (90.06%) since the start of the 2014 season.

The Wildkats have lost just once this year — a one-point defeat against Northwest A foe Browning — despite graduating three seniors from the 2019 team. Last year, they lost just one regular-season game, to Browning, but responded to beat the Indians three times on their way to a third-place finish at state one year after placing second.

This year’s Columbia Falls team has talent around Windauer, who's also a standout track athlete. Junior Hannah Schweikert scored all 13 of her points in the first half as she displayed her 3-point shooting. Sophomore Maddie Robison added 13 points, finding easy buckets in transition by stealing six passes.

“Our competitiveness stands out because everyone wants to win,” Windauer said. “No one gives up. A lot of times we fall behind in the first quarter, and it shows our character that every single game when we’re behind, we end up pulling ahead and pulling it out. Our drive to keep going even if we’re down, that’s what I love about our team.”

Windauer chose the Griz for a few reasons.

“It’s close to home,” she said. “Montana will always be my home. That was important. I went to the (individual development) camp my junior year during the fall. I really clicked with the coaches and I liked their enthusiasm and energy. I met a few of the girls on the team, and they were all really nice. It was just very welcoming.”

Before heading off to college, Windauer and Columbia Falls are trying to put together a special season on the hardwood. The Wildkats placed third in 2019 and second in 2018. Windauer wasn’t on the 2017 team that won the state title, suffering an injury that soccer season that kept her out of basketball.

To get back to that championship level, the Wildcats are working on overcoming their slow starts, like the 18-11 deficit they were in after 10 minutes against Hamilton. They switched their defense to a press, forced extra presses and owned the passing lanes as they outscored the Broncs 45-14 across the final 22 minutes, showing just how good they could be.

“I think we have a lot of potential to place again at state,” Windauer said. “We have a lot to work on, like not getting behind at the beginning. I think we can stick in there with the top teams. I’m excited to play them and see how we do against them. I think we can really do something great this year.”