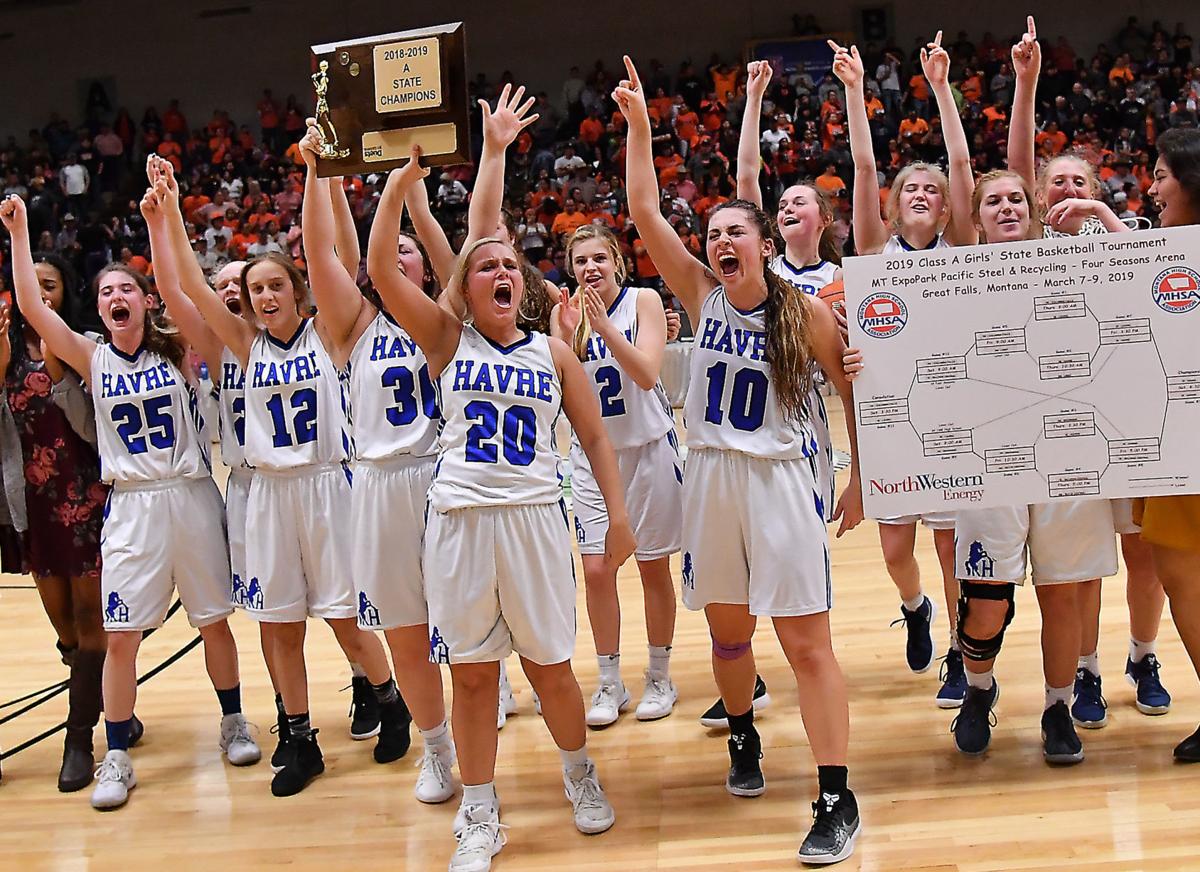 In a rematch of the previous season, Havre celebrated its second straight Class A girls basketball championship with a 42-36 win over Hardin in Great Falls. The Blue Ponies finished the season 22-1. 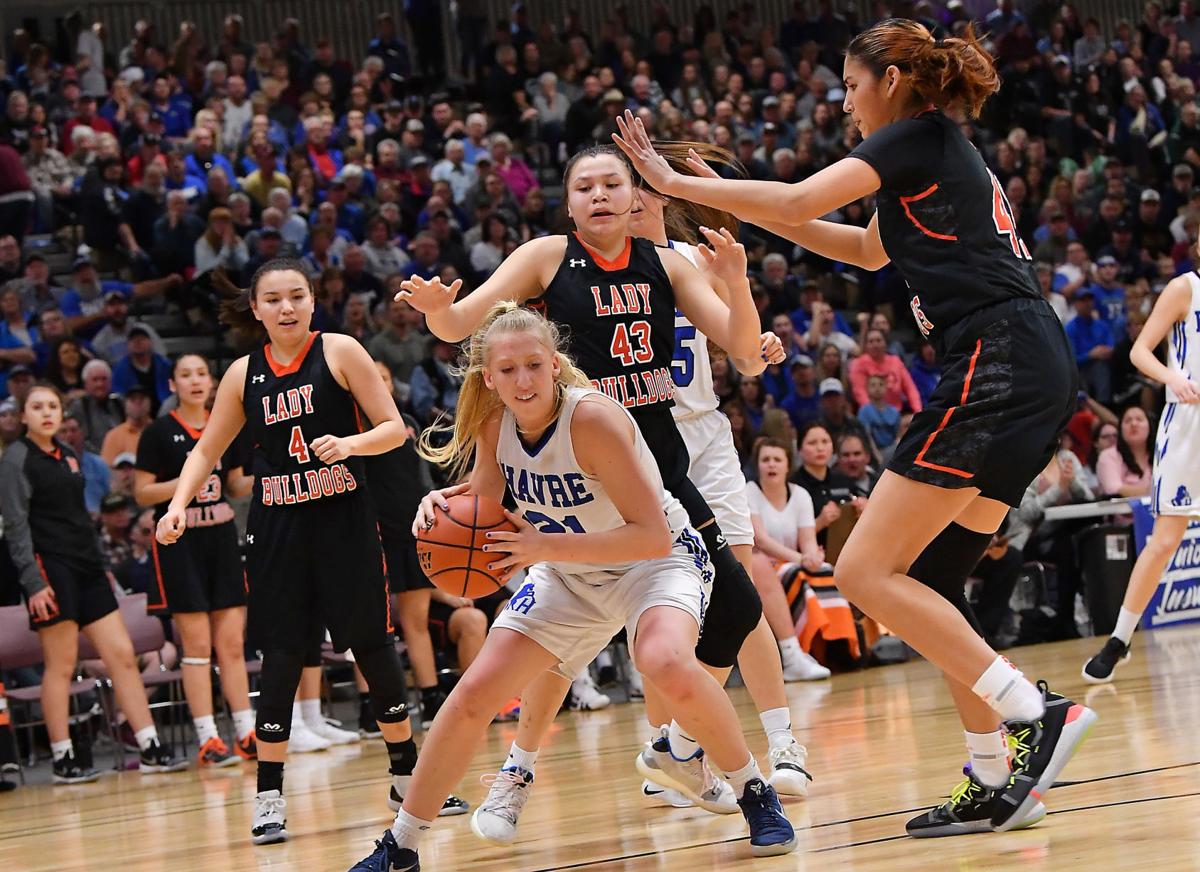 Havre's Kadia Miller is surrounded boxed in by Hardin's Marie Five (43) and Charlie Bell Rock during Saturday's championship game of the Class A girls state basketball tournament at Four Seasons Arena in Great Falls. Havre repeated as state champions with a 42-36 victory. 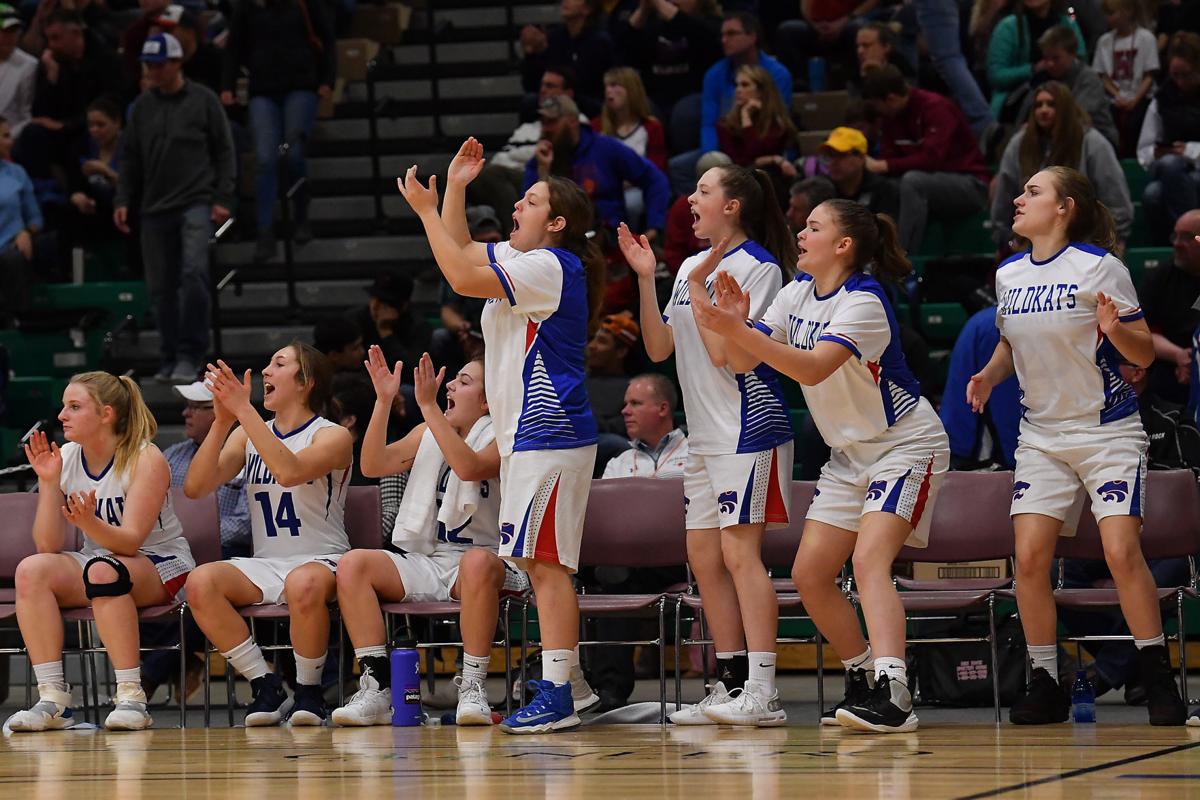 The Columbia Falls bench celebrates during their 46-44 third-place win in overtime over Laurel Saturday at the 2019 State A basketball tournament in Great Falls. 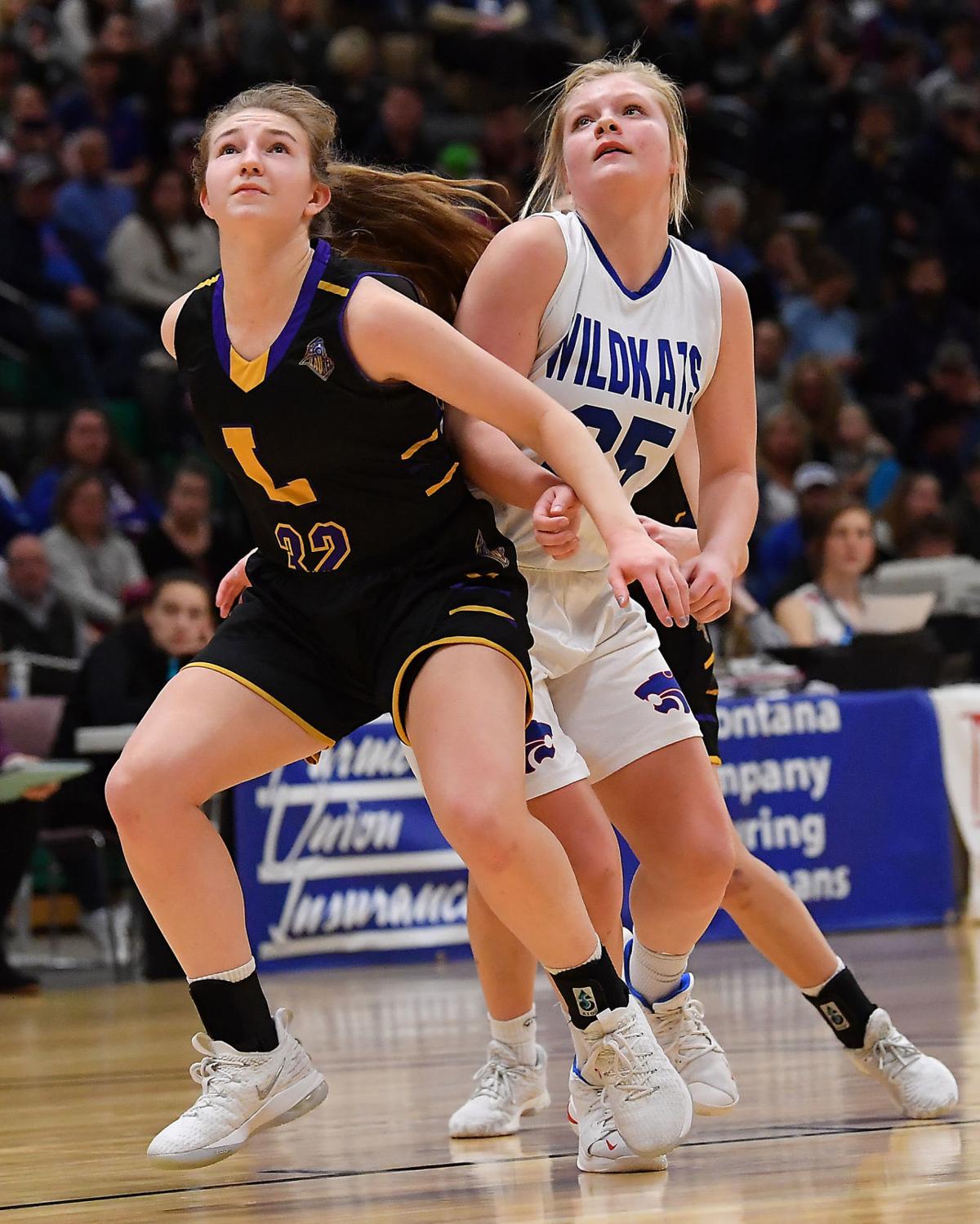 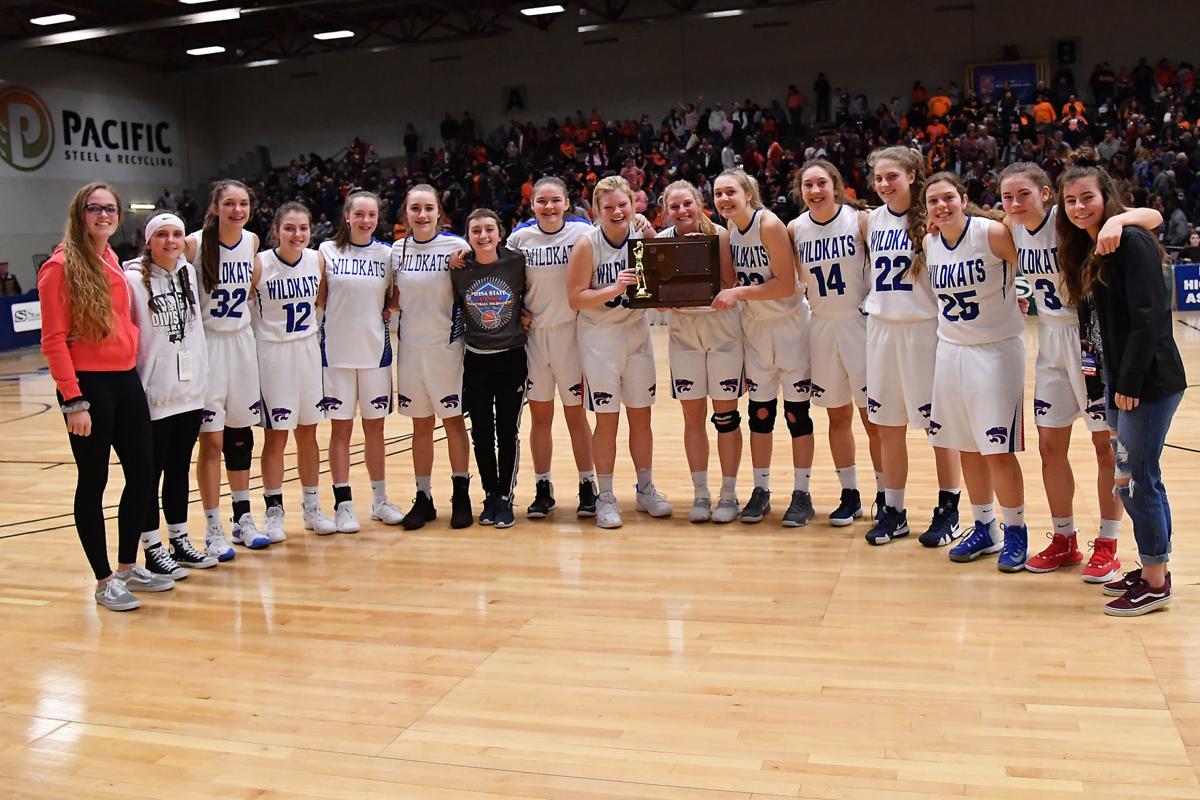 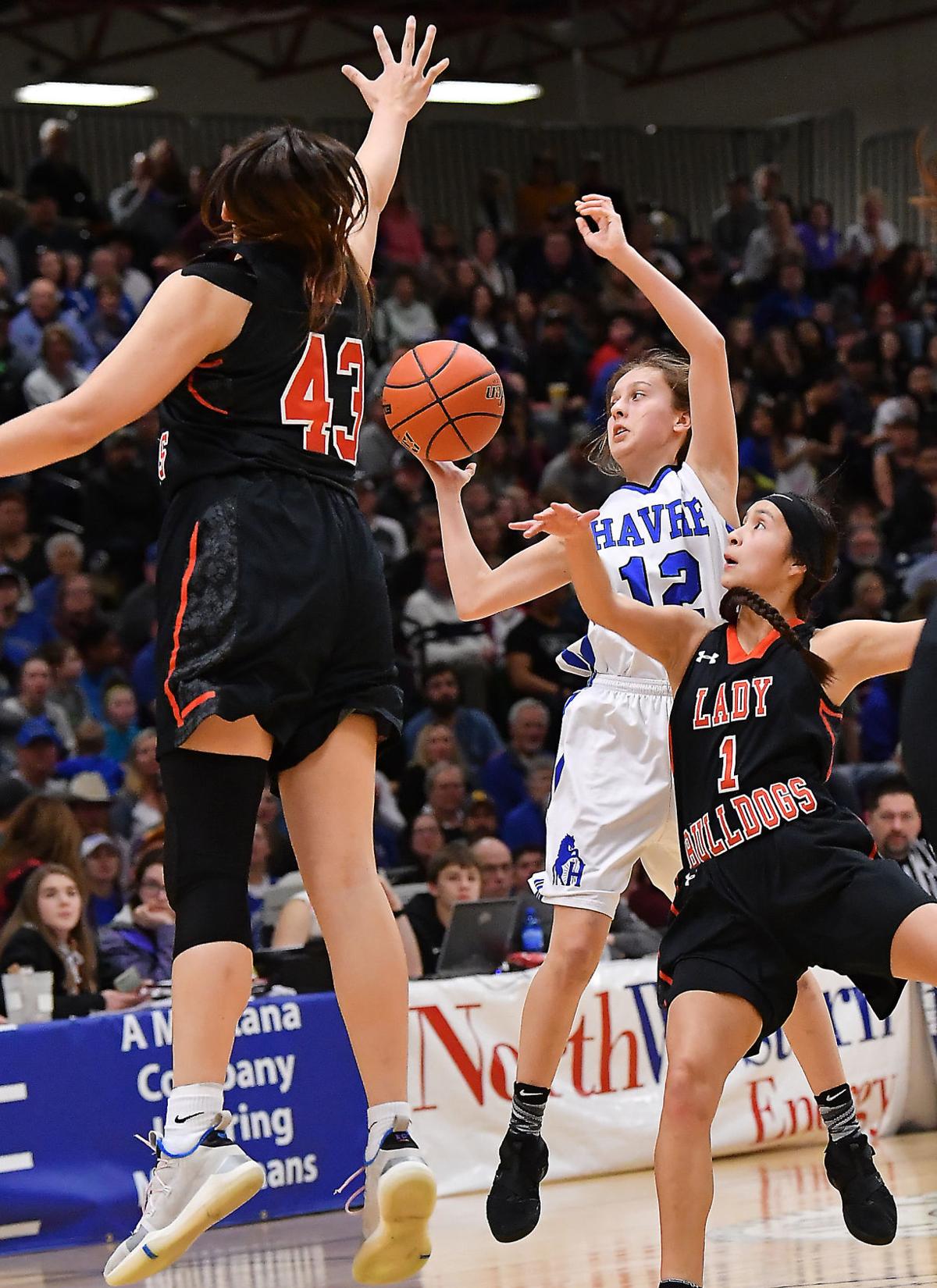 Havre's Kylie Walker puts up a shot against the defense of Hardin's Marie Five (43) and Ivery Fritzler during Saturday's championship game of the Class A state girls basketball tournament in Four Seasons Arena in Great Falls. Havre repeated as state champions with a 42-36 victory.

In a rematch of the previous season, Havre celebrated its second straight Class A girls basketball championship with a 42-36 win over Hardin in Great Falls. The Blue Ponies finished the season 22-1.

Havre's Kadia Miller is surrounded boxed in by Hardin's Marie Five (43) and Charlie Bell Rock during Saturday's championship game of the Class A girls state basketball tournament at Four Seasons Arena in Great Falls. Havre repeated as state champions with a 42-36 victory.

The Columbia Falls bench celebrates during their 46-44 third-place win in overtime over Laurel Saturday at the 2019 State A basketball tournament in Great Falls.

Havre's Kylie Walker puts up a shot against the defense of Hardin's Marie Five (43) and Ivery Fritzler during Saturday's championship game of the Class A state girls basketball tournament in Four Seasons Arena in Great Falls. Havre repeated as state champions with a 42-36 victory.

Havre (22-1) repeated as the Class A girls basketball state champions with a 42-36 win over Hardin (21-4) Saturday night at Four Seasons Arena.

Just like after their 42-35 win in 2018, they hoisted the trophy on the same floor and over the same opponent.

“We wanted to get (the repeat), but we really just tried to stay focused on it’s one game, let’s finish out strong and let’s just go after it,” Havre junior Kyndall Keller said.

“I knew it was going to be a battle and every possession was going to matter,” Hardin coach Cindy Farmer said. “It wasn’t going to be too big of a lead you know, so going in at halftime tied (we) felt pretty good about that.”

Havre trailed early, but fought back to a 16-16 tie with the Bulldogs at halftime sparked by Sadie Filius and Katie Wirtzberger’s six points apiece.

“We talked in the locker room ‘One more half. Sixteen minutes. Let’s get after it and do our best and hopefully it turns out this way,’” Keller said.

Pep talk in hand, the Blue Ponies came out and less than a minute in Filius sliced into the middle for two. Bodies continued to fly, but Havre began to find ways around the size advantage Hardin had down low as the purple athletic tape players wore to cover floor burns continued to multiply on various appendages with each substitution.

The Blue Ponies scored 16 in the third quarter and then kept Hardin from scoring for almost five minutes of the fourth quarter.

“Defensively, we were really good and if we’re that, then we’re going to be in it,” Kraske said. “That’s what we relied on all season long in tough games and we did it again tonight and then we collectively brought it at the end.”

With 40 seconds left and a 42-36 lead, the bench players for Havre started jumping up and down. And with 16 seconds left, Kraske sent in the subs pulling his starters and greeting them all with big hugs as they returned.

“It means a lot to us win or lose. A lot of family business there at the end,” Kraske said.

Hardin’s Larae Wallace scored four points in the last 30 seconds, but the gap was too large to overcome.

Keller led the Blue Ponies with 17 points, including 9-of-14 from the free throw line, and Filius scored 13.

Hardin’s Marie Five scored 13 to lead the Bulldogs, who were making their third appearance in the state championship game in as many years; all earning them the second-place trophy.

After Laurel defeated Columbia Falls to open the 2019 State A basketball tournament, Columbia Falls was determined not to go home without a trophy. The only thing was to get it, they’d again have to face the Locomotives.

On Saturday, the Wildkats defeated Laurel 46-44 in overtime in the third-place game Saturday afternoon.

“Boy it gets down to a game like that and it’s about heart, it’s about desire and both teams you could tell wanted it and that’s why it was such a special game,” Columbia Falls coach Cary Finberg said. “Both teams were going at each other hard and we were fortunate to make one more play than they did and that was the difference.”

Columbia Falls played their way back through the bracket over three days with wins against Libby and Billings Central to get a chance at third-place.

“We definitely didn’t play our best when we played (Laurel) Thursday so a rematch was what we wanted,” Columbia Falls senior Ryley Kehr said. “It was tiring, but both teams were tired so it was just who played the hardest.”

Knowing how quickly they could end up in a hole after their opening-round loss where the Locomotives built a 23-2 after the first quarter, Columbia Falls was determined to limit turnovers and defend the shooters. By halftime Saturday, they were in the lead 25-17.

"The game got really physical early in the game and that was the difference in that first half," Laurel coach Pat Hansen said. "We talked at halftime about stepping up to this and I thought our girls did a great job competing."

But Laurel came back to take their first lead of the game with 2 minutes, 15 seconds left in regulation when Sammi Spitzer made both free throws to give the Locomotives a 40-39 lead.

Columbia Falls tied it up with a Ryley Kehr basket and to send it to overtime.

With 1:22 left in overtime, Josie Windauer took a pass from Madysen Hoerner below the basket to put the Wildkats up 45-46 and Kehr iced it with by making a final free throw in the waning seconds.

"The way they came back, what a game," Hansen said. "I hurt for (Laurel) because they really cared about that game and it showed, but to tell you the truth, this is going to make them so much stronger down the road."

The Locomotives finished the season 18-6.

At 25-2, it was a fitting end cap to the last four years for Columbia Falls seniors Kehr, Cowan and Alexis Green.

“This senior class – four state trophies in four years, a school-record 25 wins, one of the two teams that are going to end the season on a win – it’s a special group,” Finberg said. “For this group, for these seniors, to do that four years in a row – a first, a second and two thirds – credit to them.”

Laurel bounced back from Friday night’s semifinal loss with a 54-23 win over Browning to survive elimination and advance to the third-place game of the Class A state girls basketball tournament.

The Locomotives led 22-13 at half and continued to increase their margin as the game went on.

Freshman Mya Hansen scored 18 points and sophomore Maeson Cotter scored 13 while shooting 3-for-3 from beyond the arc.

Columbia Falls continued battling its way back through the bracket after dropping a first-round game to Laurel.

Billings Central was coming off an emotional loss to Hardin in the semifinal. The Rams were led by freshman Solie Elletson with 11 points.

This story will be updated.

Ryley Kehr makes this with under 15 seconds to tie it up and we are going to OT. @cfallswildcatfb 41, @LocomotivePride 41