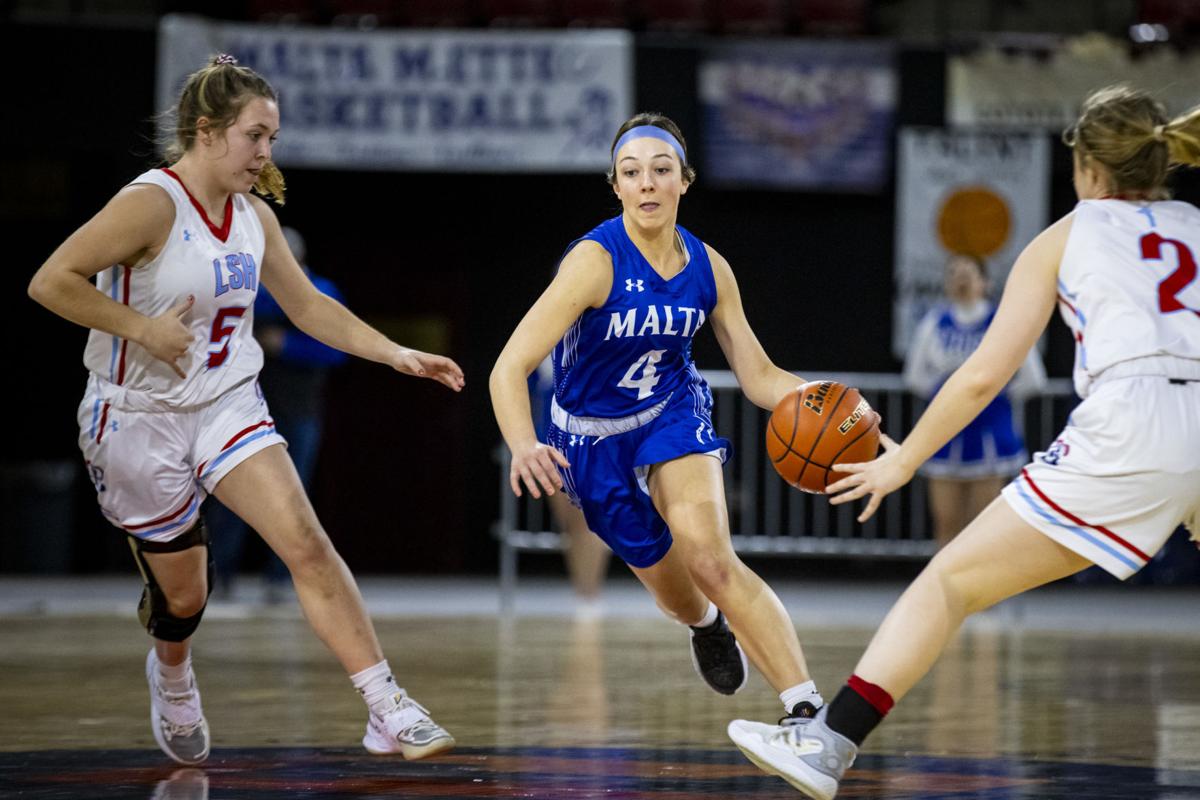 Malta’s Kylee Nelson dribbles through the defense of Missoula Loyola's Lani Walker (5) and Natalie Clevenger during Wednesday's first-round game at the Class B girls state basketball tournament at First Interstate Arena at MetraPark. 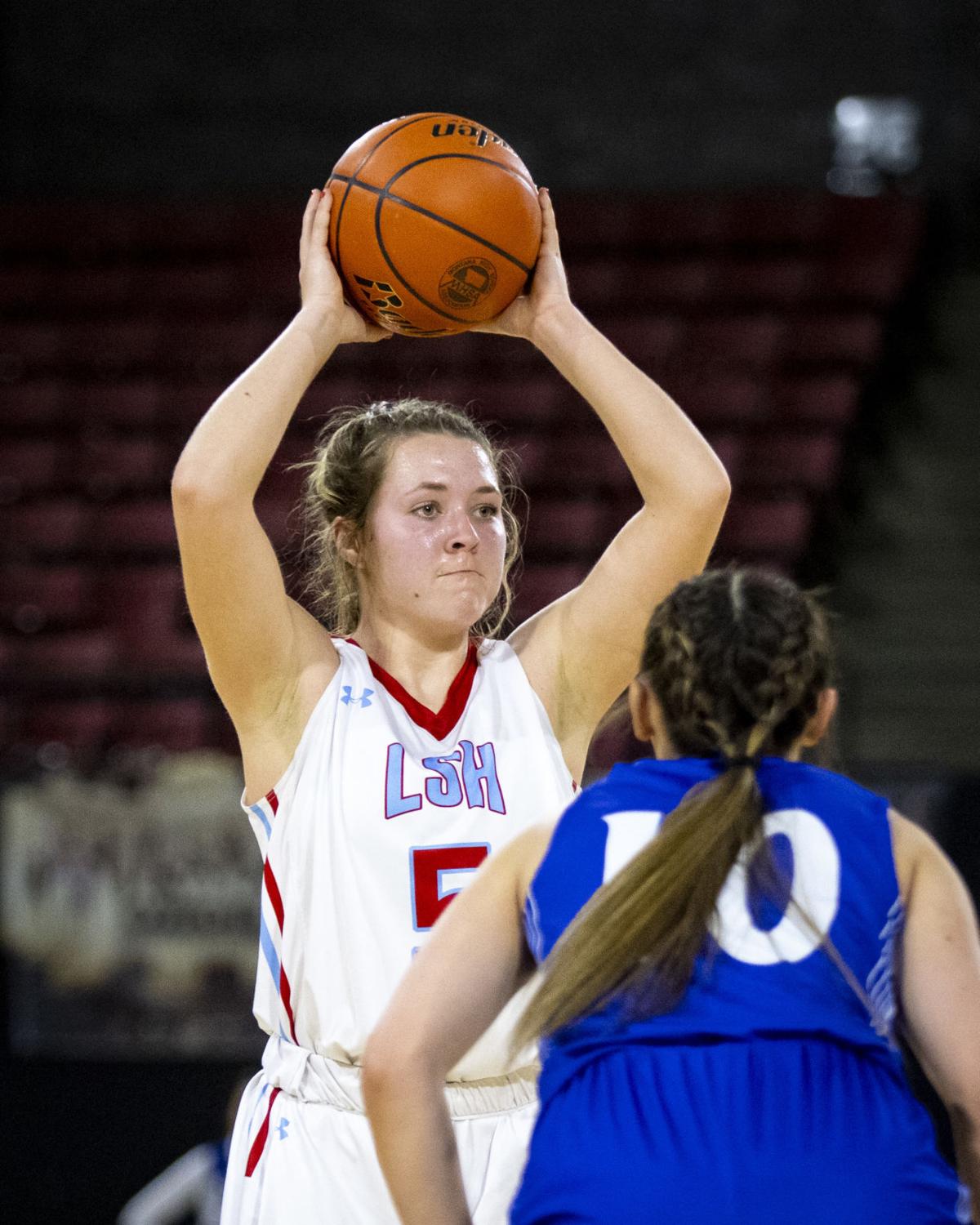 Missoula Loyola's Lani Walker looks to pass against Malta's Erica Smith in the first round of the Class B girls state basketball tournament at First Interstate Arena in at MetraPark on Wednesday.

Malta’s Kylee Nelson dribbles through the defense of Missoula Loyola's Lani Walker (5) and Natalie Clevenger during Wednesday's first-round game at the Class B girls state basketball tournament at First Interstate Arena at MetraPark.

Missoula Loyola's Lani Walker looks to pass against Malta's Erica Smith in the first round of the Class B girls state basketball tournament at First Interstate Arena in at MetraPark on Wednesday.

BILLINGS — Getting a day off to sit and think about the semifinals is something new for players and coaches at the Class B girls state basketball tournament.

That’s the boat top-ranked Big Timber and No. 4 Malta are in. And it’s a good boat to be in, even if the situation is riddled with uncertainty.

Big Timber and Malta both won first-round games Wednesday at First Interstate Arena at MetraPark, with the Herders taking out No. 9 Anaconda 63-58, and Malta knocking off No. 6 Missoula Loyola 61-45.

Because the time between games has been extended due to COVID-19 protocols in order to clear the arena of fans, each tournament day consists of six games instead of the usual eight. Thus, the tournaments have been extended a day and as such, it gives Big Timber and Malta a day off to mull things over instead of riding the momentum of a first-round win.

The Big Timber-Malta semifinal is set for 5:30 p.m. Friday.

“We really didn’t spend any time talking about Big Timber this week,” Malta coach Nate Hammond said when asked what was in store for his team on its day off. “We knew we had all day (Thursday) to go over game film, and we’ve got some gym time. We just certainly weren’t going to get ahead of ourselves and think about Big Timber because Loyola we knew was going to be a huge game.”

The M’ettes are staying overnight in Billings. The Herders went back to Big Timber for a day of remote learning, trying to keep a normal routine. As normal as you can when you know a state semifinal is awaiting, that is.

“We’ll just focus on Friday’s game, get in the right headspace,” Big Timber senior Hailee Brandon said. “We’ll watch some film, shoot around, and get in that space.”

The remaining first-round games will be played Thursday: No. 7 Eureka plays No. 3 Roundup at 9 a.m. and Columbus takes on Fairfield at 11 a.m.

What, Big Timber worry? Well, maybe a little. Seeing 5-foot-11 post player Emily Cooley helped off the floor with 1:23 to go in the first half and holding just a slim two-point lead at the break might have been a little unsettling.

Like most of the Herders, Cooley has an aggressive streak in her, and as such, is the team’s top rebounder. Missing her for the entire second half could certainly affect things adversely for the Herders.

After trailing 12-3, Anaconda had a possession to tie but Emily Cooley comes up with a block. #mtscores pic.twitter.com/9zf9VK0G1d

If they let it. The Herders were determined not to let it, and they extended their perfect record to 22-0 without Cooley, who didn’t return after her injury.

Brandon, a 5-6 senior, did her part, scoring 20 points and grabbing a career-high 16 rebounds. Darby Johnston nabbed 10 rebounds as well, giving the Herders a 43-33 advantage in that category.

Big Timber’s Bailey Finn led all scorers with 23 points, and Kameryn Ketcham and Alyssa Boshart both finished with 10 to help the Herders hold off the stubborn Copperheads.

Big Timber scored the game’s first nine points, though that lead was trimmed to 28-26 by halftime. The Herders were up by 10 by the end of the third quarter, yet there Anaconda was, down by just three with 2:12 left in the game.

Consecutive baskets by Finn, who also had six assists, got the lead back up to seven with 1:18 left and Anaconda (13-7) could get no closer.

“We played a game without Emily because of COVID late in the season and played exceptional without her,” said Big Timber coach Kim Finn, who was hopeful the extra day would help get Cooley healthy for the semifinals. “So we know we can play without her. So I just told them we got it. We got this.”

Points tougher to get in the third quarter but Malta’s Addy Anderson uses all the rim here. To the fourth, Malta leading Loyola 36-32. #mtscores pic.twitter.com/Z8DFZH5cGM

Sami Johnson scored 16 points, Mia Sullivan-Sanders had 13 and Alyssa Peterson finished with 11 for Anaconda, which plays Loyola in a loser-out game Friday at 9 a.m.

"The girls played awesome," Anaconda coach Andy Saltenberger said. "They came to work. They didn't give up and they played all the way until the end. We're super proud of them and their effort. We're not done, so we'll move on and go to the next game."

As Loyola kept filling up the bucket with 3-pointers — four in the first quarter and three more early in the second — Hammond knew something had to be done.

The Malta coach took his team out of its zone and into man-to-man. The move paid dividends.

Loyola made just one 3-pointer over the next 16 minutes, allowing the M’ettes to pull away and into the semifinals.

Brooke Twite with one of Loyola’s 7 first-half 3-pointers. Breakers and Malta tied at 28-28. #mtscores pic.twitter.com/z4hKCWG8hb

“When we were in zone, we just weren’t getting out to the ball, because we didn’t really feel like they’d be hitting seven 3-pointers,” said Malta’s Kylie Hunter, one of two seniors on a roster littered with sophomores and one junior. “But once we went to man, I felt like we were being a lot more aggressive and wanting to get the ball back.”

Points tougher to get in the third quarter but Malta’s Addy Anderson uses all the rim here. To the fourth, Malta leading Loyola 36-32. #mtscores pic.twitter.com/Z8DFZH5cGM

Lani Walker scored 10 points to lead Loyola (18-5), a defending co-state champion last season. The Breakers made 7 of 14 3-point attempts in the first half, but just 3 of 12 in the second. The game was tied 28-28 at the half, but Loyola shot just 6 of 27 shots overall after halftime.

“Normally, we’re a pretty good man team but they D’d us up pretty well,” Loyola coach Travis Walker said. “Some days (the shots) fall, some days they don’t.

“It’s fun to be here, and it’s fun to play against the teams you read about all season and you get to go up against them and see where you stack up. Malta, ultimately, made a couple more plays today.”

Photos from the first round of the MHSA Class B State Basketball Tournament at First Interstate Arena in Billings on Wednesday, March 10, 2021.

Coverage of the Class B state basketball tournament Mar. 10-13, 2021 from First Interstate Bank Arena at MetraPark in Billings.