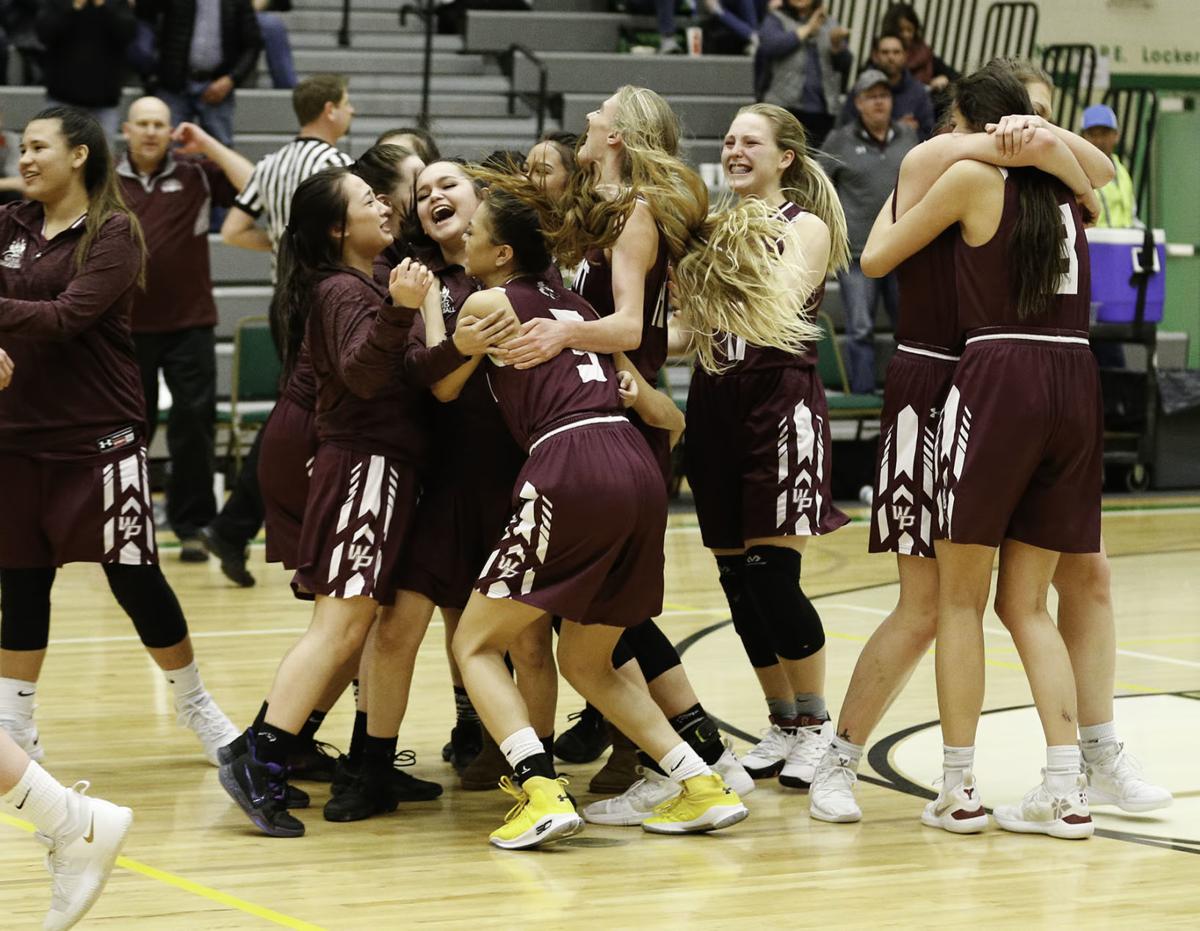 The Wolf Point girls basketball team celebrates after beating Florence-Carlton 48-35 in the Class B state title game Saturday in Belgrade. 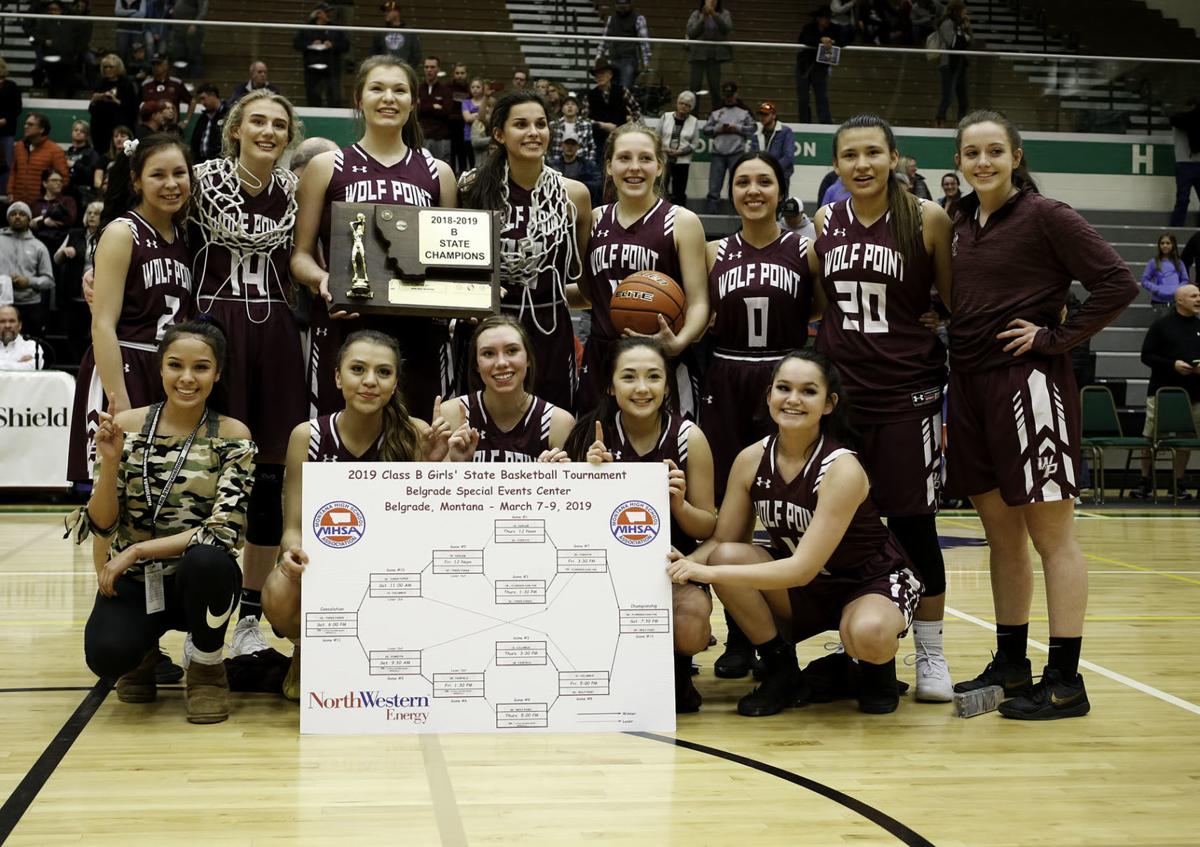 The Wolf Point girls basketball team poses with its Class B state championship trophy and bracket after defeating Florence 48-35 Saturday in Belgrade. 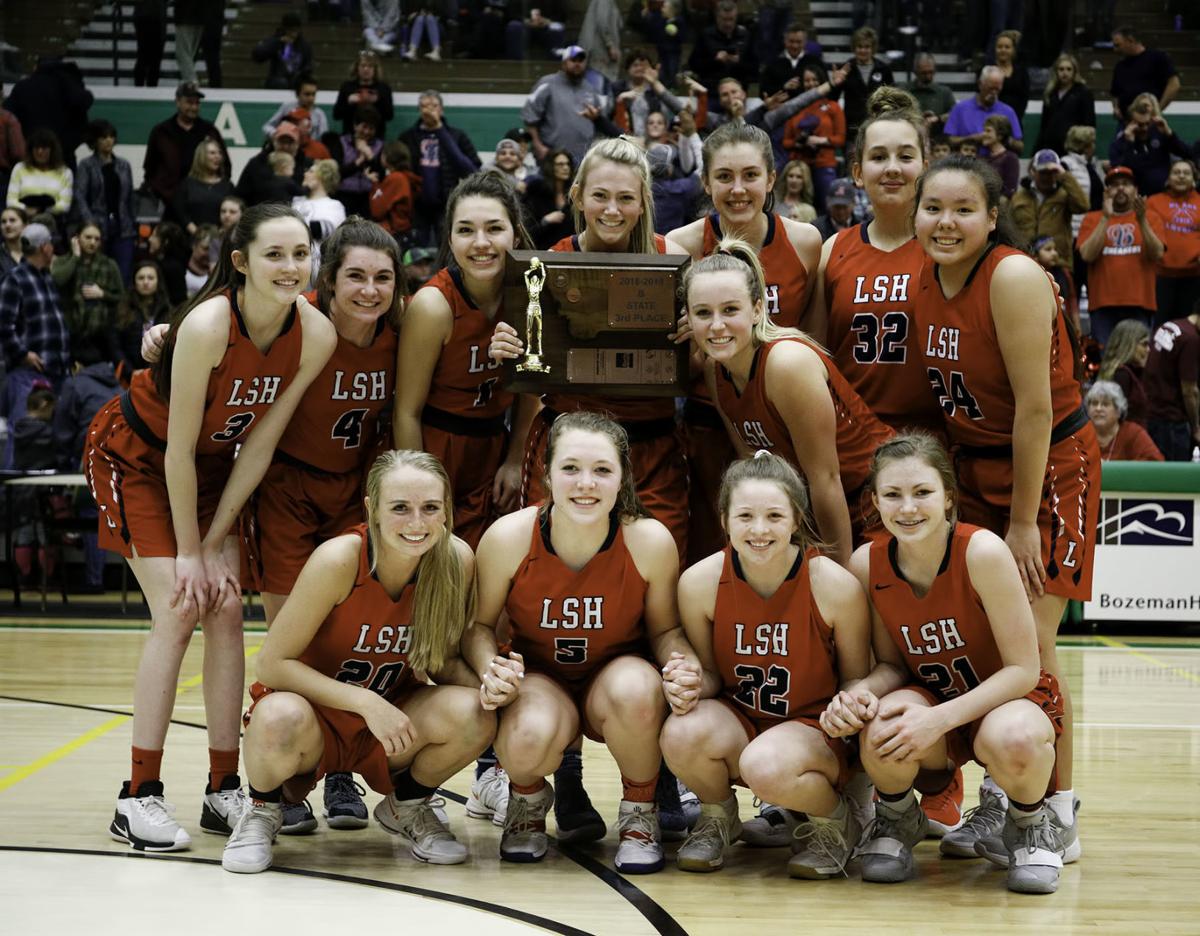 Missoula Loyola players pose for photos with the Class B state tournament third-place trophy after beating Three Forks 42-31 on Saturday in Belgrade. 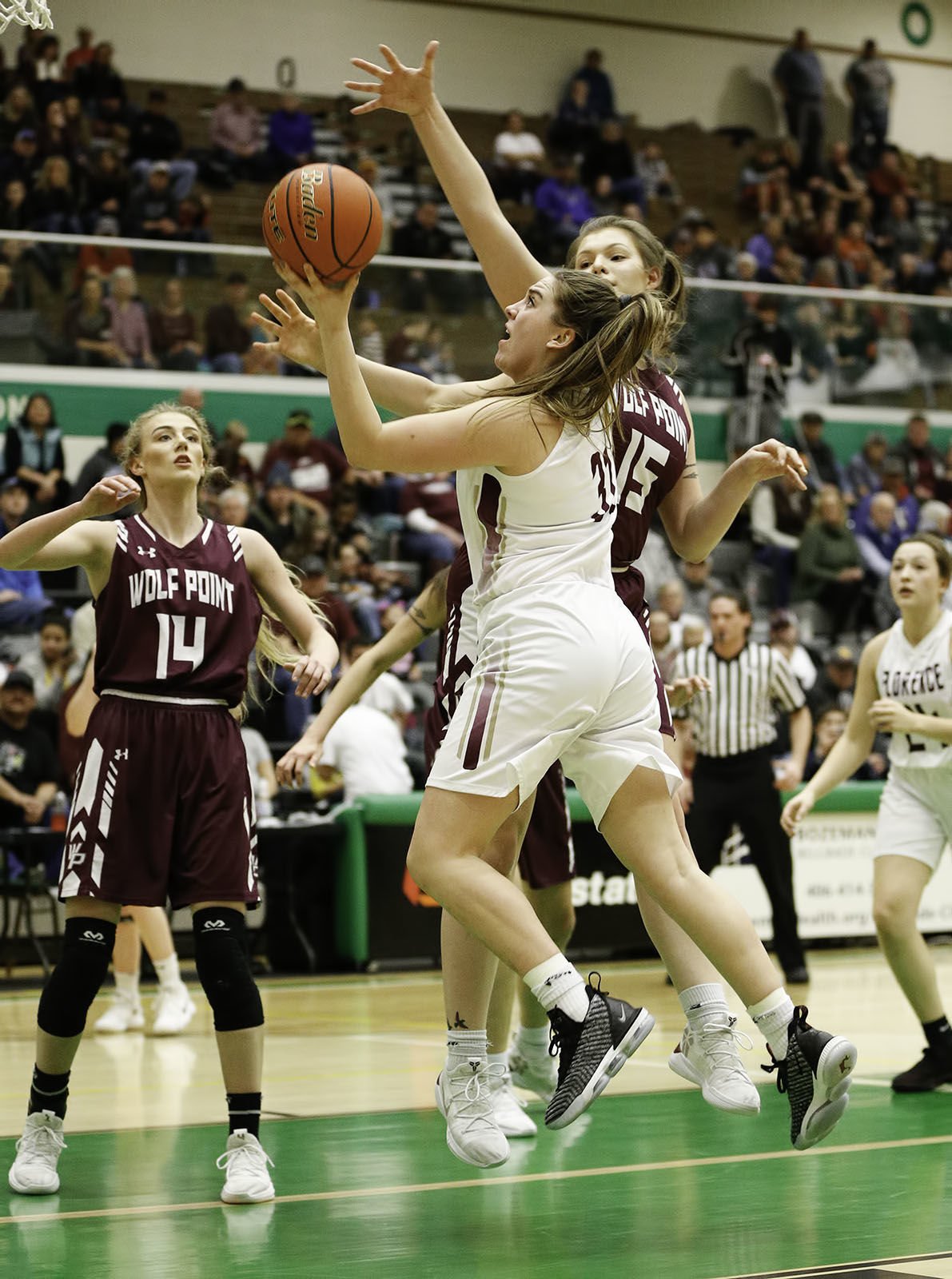 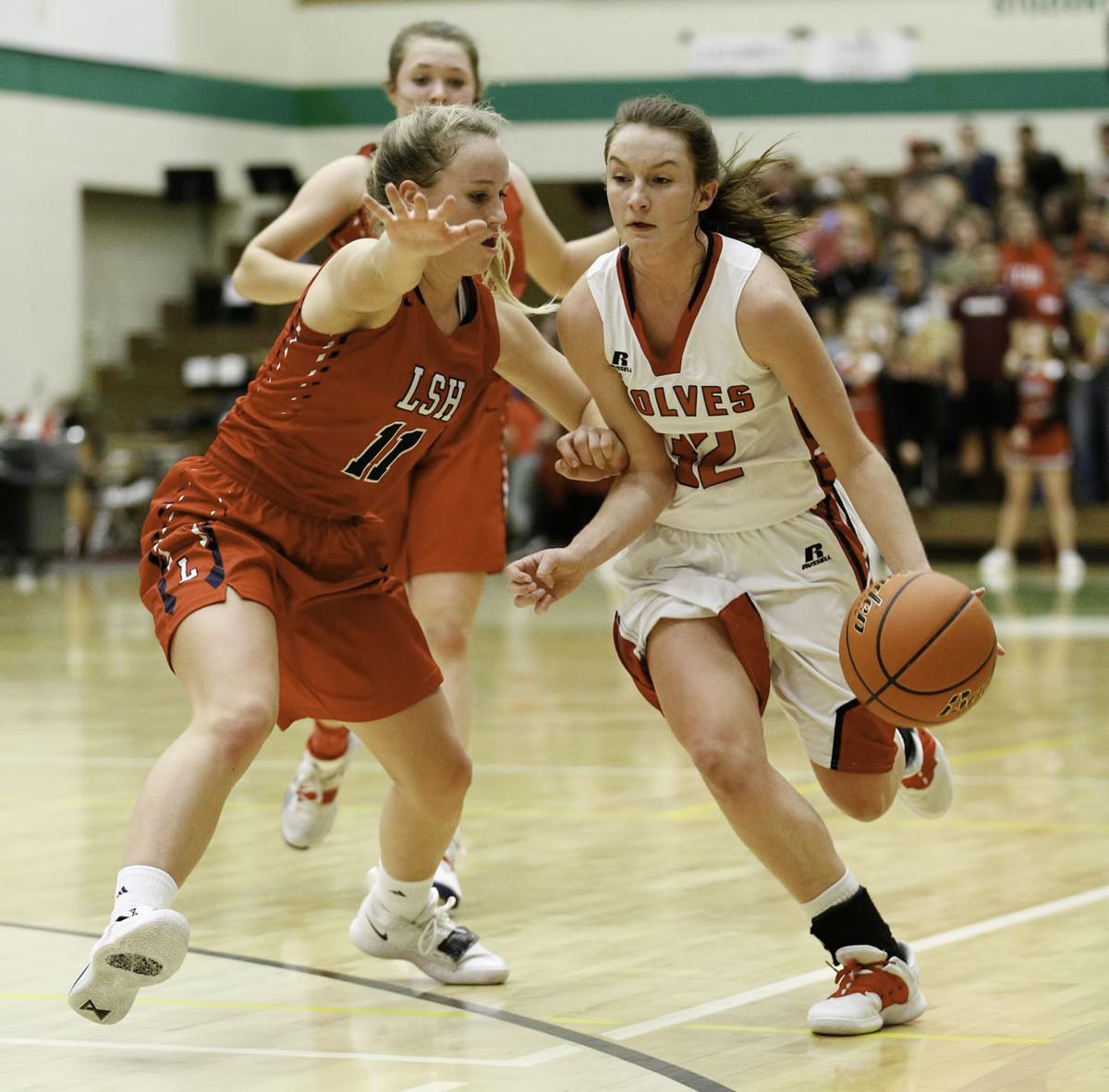 The Wolf Point girls basketball team celebrates after beating Florence-Carlton 48-35 in the Class B state title game Saturday in Belgrade.

The Wolf Point girls basketball team poses with its Class B state championship trophy and bracket after defeating Florence 48-35 Saturday in Belgrade.

Missoula Loyola players pose for photos with the Class B state tournament third-place trophy after beating Three Forks 42-31 on Saturday in Belgrade.

BELGRADE — The Wolf Point girls basketball team dominated most of Saturday’s Class B state title game, but coach Cody Larson didn’t feel assured of the win until one minute remained on the clock.

At that point, the odds were overwhelming, as was the scene in front of him. Junior guard Mya Fourstar was holding the ball near half court, his bench players were sharing embraces and the Wolf Point fans were giving a standing ovation.

For the first time since 2003 and third time in school history, the Wolves were state champions, thanks to a characteristically commanding win. Top-ranked Wolf Point defeated No. 7 Florence-Carlton 48-35 on Saturday at the Belgrade Special Events Center.

“It doesn’t feel real,” a tearful Wolf Point senior Semarah Wells said on the court minutes after the trophy presentation. “Since we were third-graders, we’ve been planning this out. We finally did it.”

The @WPHS_Wolves are Class B state champions for the for the first time since 2003. #MTscores pic.twitter.com/GdOliPOIQ2

Florence-Carlton (21-3) started strong, taking a 5-2 lead about halfway through the first quarter. But Wolf Point (22-3) found a rhythm and ended the quarter on an 8-0 run.

The Falcons, playing in their first and only state title game since winning it in 1998, fought back and tied the game 12-12 early in the second. Once again, the Wolves blew back, using a 9-2 run to take a 21-14 lead into halftime.

The lead grew to 27-14 early in the third, right after one of Florence-Carlton’s best players — senior Makenna Liles — picked up her fourth foul. She sat out the ensuing 5:05 of the quarter, and she fouled out with 6:28 left in the game.

Wolf Point led 33-19 going into the fourth and kept a similar distance for most of the quarter. The closest Florence-Carlton crept was nine points.

“I felt like we had it the whole way,” Wells said. “I don’t think we were nervous. I think we just wanted to get it done.”

Senior Danielle Zahn led the Falcons with 12 points but shot just 4-of-17 from the field. Florence-Carlton made 25 percent of its field goals on the night, compared to 33.3 percent for Wolf Point.

The Wolves lost to Townsend 54-52 in the 2004 Class B state title game. Wolf Point spent the rest of that decade and most of this one falling short of the championship stage. In fact, the Wolves didn't make state again until 2017, when they fell against Fairfield in the semifinals.

The Wolves missed state last year but got two pieces of great news in the offseason. Frazer guard Mya Fourstar and Poplar post Imani Bighorn chose to transfer to Wolf Point. Adding a couple of stars hardly guaranteed a title, however, and the Wolves initially weren't sure how well they’d fit in.

But fit in they did, and both played well on Saturday. Fourstar shot just 3-of-13 from the field but grabbed four rebounds, dished out four assists and snagged three steals.

And Bighorn? She was the best player on a floor that included Zahn, a Montana State Billings signee. Bighorn led all players with 19 points and 14 rebounds (her twin sister, Mary, added nine points and six boards).

Other than a couple close losses to Harlem and a stumble at Scobey, the Wolves wiped out their competition this season.

“We knew we were gonna have a good team, but we wanted to keep it really low-key,” Larson said. “We all had to sacrifice for the betterment of the good, which we did.”

Bighorn’s star performance prompted a star’s reception. She balanced media interviews with photos and hugs from just about every Wolf Point fan in the building shortly after the game ended.

At that point, Bighorn didn’t know how she was going to celebrate the title in the coming hours and days. She, like the rest of the Wolves, were happy to wait.

“I can celebrate for the rest of my life,” she said.

Wolf Point is on an 8-0 run. Here’s Mary Bighorn with a rejection. #MTscores pic.twitter.com/TGMQjeiZYj

Fun second quarter so far. This layup from @myfourstar gave the @WPHS_Wolves a 16-12 lead over Florence-Carlton — the current score. 3:19 left in the half. #MTscores pic.twitter.com/hSEbWa2P60

9-2 run to end the quarter for Wolf Point. Here’s Imani Bighorn with a bucket. #MTscores pic.twitter.com/8QrX268Mbp

Florence has cut the deficit to single digits a couple of times, but the @WPHS_Wolves have responded. Plays like this have been back-breakers for the Falcons.

The win gave the No. 9 Breakers their first state trophy since 2010 (also third).

“We really know how to work together,” said Missoula Loyola junior Sydney Koppang. “Hopefully, we get a better result next year, but I’m really happy with how we ended the season.”

The Breakers take third at the Class B state tournament for their first state trophy since 2010 (also third). #MTscores pic.twitter.com/vO3l1CuATZ

The first quarter was filled with turnovers and missed shots, but Koppang jolted the arena with a shot from half court that swished through the net as the scoreboard lights turned red.

The buzzer beaters didn’t end there. Carroll College signee Kyle Olson defeated the second quarter horn with a long runner — the only made field goal on 13 tries for Three Forks in the quarter.

Olson scored a game-high 22 points on 25 points, and she added six rebounds and six steals.

Ashton Libel was the only senior on the Breakers’ roster this season, while the Wolves will graduate three players: Olson, Paeton Ohs and Teagan Page (an alternate at state).

“They were playing with a bunch of freshmen and sophomores who had no varsity experience,” said Wolves coach Mike Sauvageau. “We knew this was gonna be a tough year, and it was a very tough season, but a great postseason. I couldn’t be prouder of what these girls accomplished.”

Missoula Loyola overcame a record-setting performance from Forsyth’s Lindsey Hein and advanced to the Class B state consolation final.

Hein led all players with 36 points (15-of-24 from the field) and 14 rebounds. The 6-foot-5 sophomore set a Forsyth record for most points in a game, according to coach Rian Pinkerton. The No. 6 Dogies (21-5) are only graduating one player (Heather Blackwell).

The defending state champion Wolves kept their Class B state trophy hopes alive with a win over the Cougars.