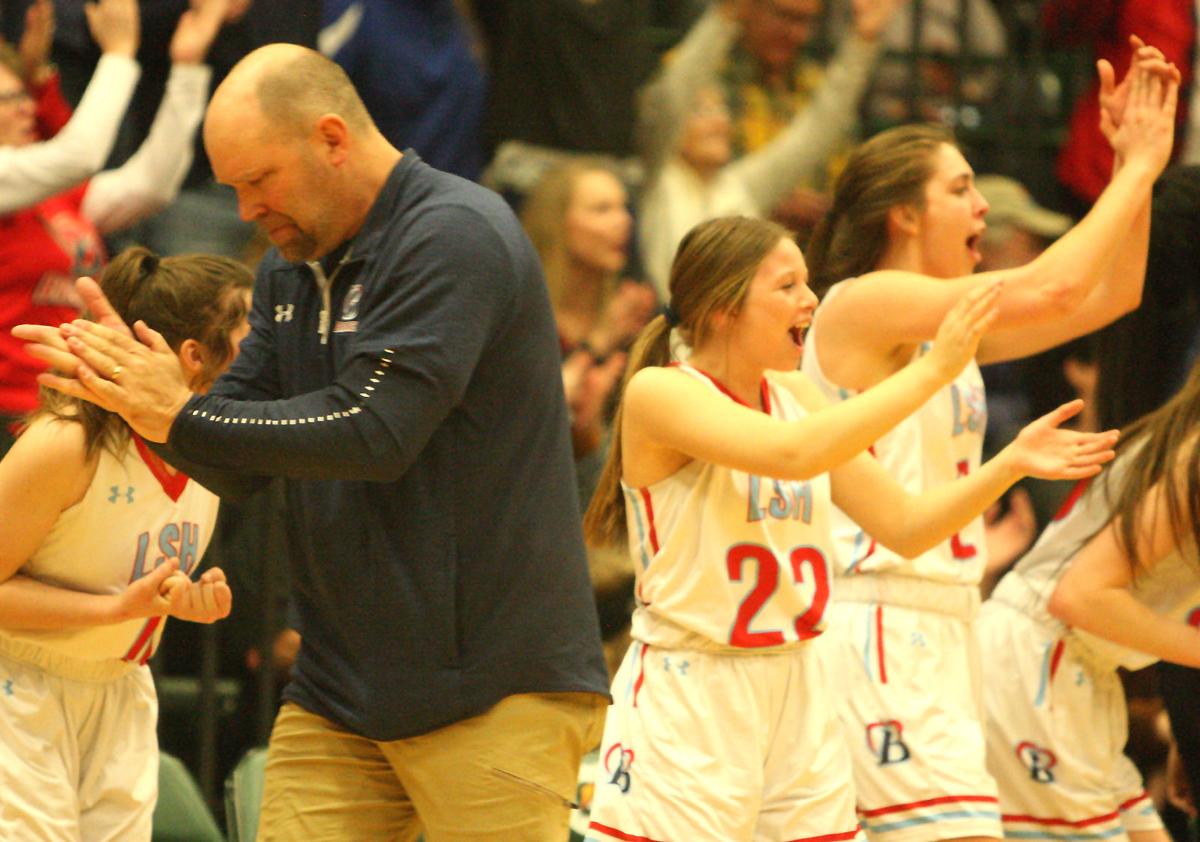 Loyola Sacred Heart coach Travis Walker celebrates a score against Shelby during the State B girls semifinals on Friday at the Butte Civic Center. The Breakers won the game, 46-21. 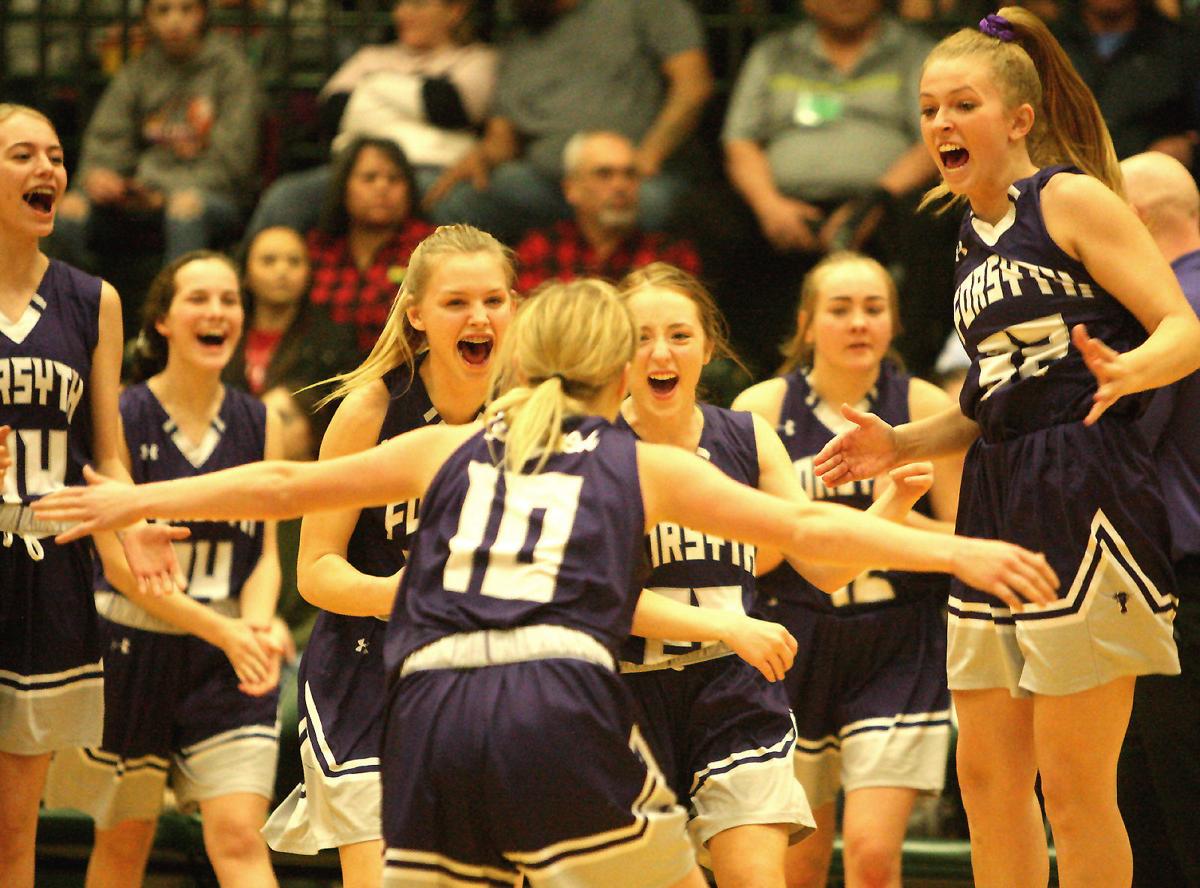 Forsyth celebrates after defeating Big Timber on Friday to advance to the State B girls championship against Missoula Loyola.

Loyola Sacred Heart coach Travis Walker celebrates a score against Shelby during the State B girls semifinals on Friday at the Butte Civic Center. The Breakers won the game, 46-21.

Forsyth celebrates after defeating Big Timber on Friday to advance to the State B girls championship against Missoula Loyola.

BUTTE — In a Southern B rematch, Forsyth defeated Big Timber 46-30 in the State B semifinal. They thought they were making it to the first state championship game in school history,

“It’s crazy. It’s never been done in Forsyth before so this is a first for us and we’re really excited,” junior Lindsey Hein said after the game. “But we still have one more.”

There wouldn’t be another game in their season.

When the tournament was cancelled late Friday night, the Dogies (22-4) were named co-champions with Missoula Loyola.

After dropping a 51-45 Southern B semifinal to Big Timber a week before, Forsyth came in with a strategy to contain the three-point shooting prowess of the Sheepherders and their freshman Bailey Finn.

“We came out in the defense we wanted to come out in and fortunately we were able to end up with a 10-2 lead in the first quarter,” Forsyth coach Rian Pinkerton said. “But it makes it uncomfortable because you want to come out in the second quarter just as strong and Big Timber is a good team – a team you really have to respect – and they’re well coached.”

“We knew what was going to happen, we knew it and it just didn’t work out for us,” Big Timber coach Kim Finn said. “We just didn’t finish what we should’ve and defensively didn’t quite match their intensity.”

Big Timber (23-2) was led by Emily Cooley with 11 points as the Dogies limited the sharp-shooting Sheepherders to just one three-pointer.

While the Dogies were effective against Finn, the Sheepherders struggled to contain Hein, the 6-6 junior. She scored 24 points to lead the Dogies.

“I think we came out and we were confident and my guards made great passes in and they saw it right away and we kind of got an early lead and we never gave up and we never let in,” Hein said.

But after having watched the lead slip away rapidly last week, Forsyth continued to push in spite of not trailing after the opening baskets.

“If we relax on defense at any point, Finn comes out and hits three 3s and all of a sudden they’re back in the game,” Pinkerton described. “In fact that was going through my mind until about a minute in the fourth quarter left.”

.@FDogies will be in the State B girls championship tomorrow with a 46-30 win over Big Timber. #mtscores pic.twitter.com/ziGA0PG3WG

And with 30 seconds left in the game, the Forsyth student section began an “I believe that we can win” chant. They just didn’t know it was for their first girls basketball state championship.

Missoula Loyola was still processing the emotions of the day after their semifinal game at the State B girls tournament.

The Breakers had rolled to a perfect 25-0 record this season, but their path to a championship after 14 years was finally clear after they defeated Shelby 46-21.

The he undefeated Breakers will play for the State B girls championship. #mtscores pic.twitter.com/m9Ja8O5CNy

That is until later that night when everyone learned the tournament had been cancelled and they would become co-champions to add to their original title from 2006.

“There were a few rumors going around (before) of maybe it being cancelled and such, but we knew that maybe this could be our last game if everything went the way it went,” said Koppang after.

Coach Travis Walker and his team talked about it before the game.

“Ultimately those are decisions that are out of our control. We can only control what’s in our locker room and in our family and I’m glad we got to play at least one more game with our family,” Walker said.

Missoula Loyola jumped out a 26-8 halftime lead behind fifteen points from behind the three-point line in the first half alone. Kelsey Esh opened the scoring with a three-pointer then Koppang added two before the first quarter was finished. Lani Walker finished with two three-pointers before the half ended.

“Our energy just built up every time a shot went down,” Koppang said.

She finished with 15 total points to lead the Breakers and Sam Clevenger added nine. The Breakers finished collectively with seven three-pointers.

“We felt like if we could do a good job defensively on them then we’d have a good shot and we did have girls step up and knock shots down and it was a big win,” Walker said.

All of Shelby’s first quarter points came from the free throw line as the Breakers continued to put pressure on Maddison Underdal.

“I knew they were going to go man at some point because that’s kind of has been our nemesis, but other than that they are who they are and they are really good,” Shelby coach Ryan McDermott said. “They played well and that’s what happens in the semifinal of a state tournament and we ran into a juggernaut and just didn’t bring it today.”

The Coyotes (17-8) were led by Brogan McAllister with seven points.

“They’re No. 1 in the state for a reason and we gave it our best shot,” McDermott said.

Unfortunately for Shelby, while they thought they had another game, this was ultimately the final game for the Coyotes’ six seniors.

“They’re fighters,” McDermott said while still unaware of the decision that would come later that night. “They’ve been fighters since they’ve been together as sixth graders and it says a lot about their character and I thought they represented the Shelby Coyotes really well today.”

Malta earned a 48-43 win over Bigfork in the consolation round.

The M-ettes took the lead from the beginning and didn't relinquish it and although they didn't shoot particularly well overall, they shot 65% from the free throw line, including Kelbee Denham who made nine of her ten attempts.

Malta was led by Kylee Nelson with 11 points and got Denham with nine.

Bigfork's Ansleigh Edgerton scored 17 points to lead the Valkyries as their season ended at 12-12.

Harlem defeated Colstrip 68-47 Friday morning in the consolation round at the State B girls basketball tournament.

The Wildcats jumped out to a 36-18 lead at halftime which helped keep Colstrip at bay in spite of the Fillies' 21-point fourth quarter rally.

Harlem was led by L'Tia Lawrence with a double-double of 29 points and 10 rebounds. Taya Trottier added 10 points and Kailee Henry also scored 10.

Addison Casterline and Jenna Littlebird turned in strong rebounding performances with 11 and 10 respectively as the Fillies were led by Canzas HisBadHorse with 10 points and got points from nine players.

Photos: State B girls seimifinal round

Missoula Loyola and Forsyth won their semifinal games before the tournament was cancelled due to coronavirus. Because of that, they are co-champions.

Coverage of the Class B boys and girls state basketball tournaments March 12-14, 2020 from the Butte Civic Center.