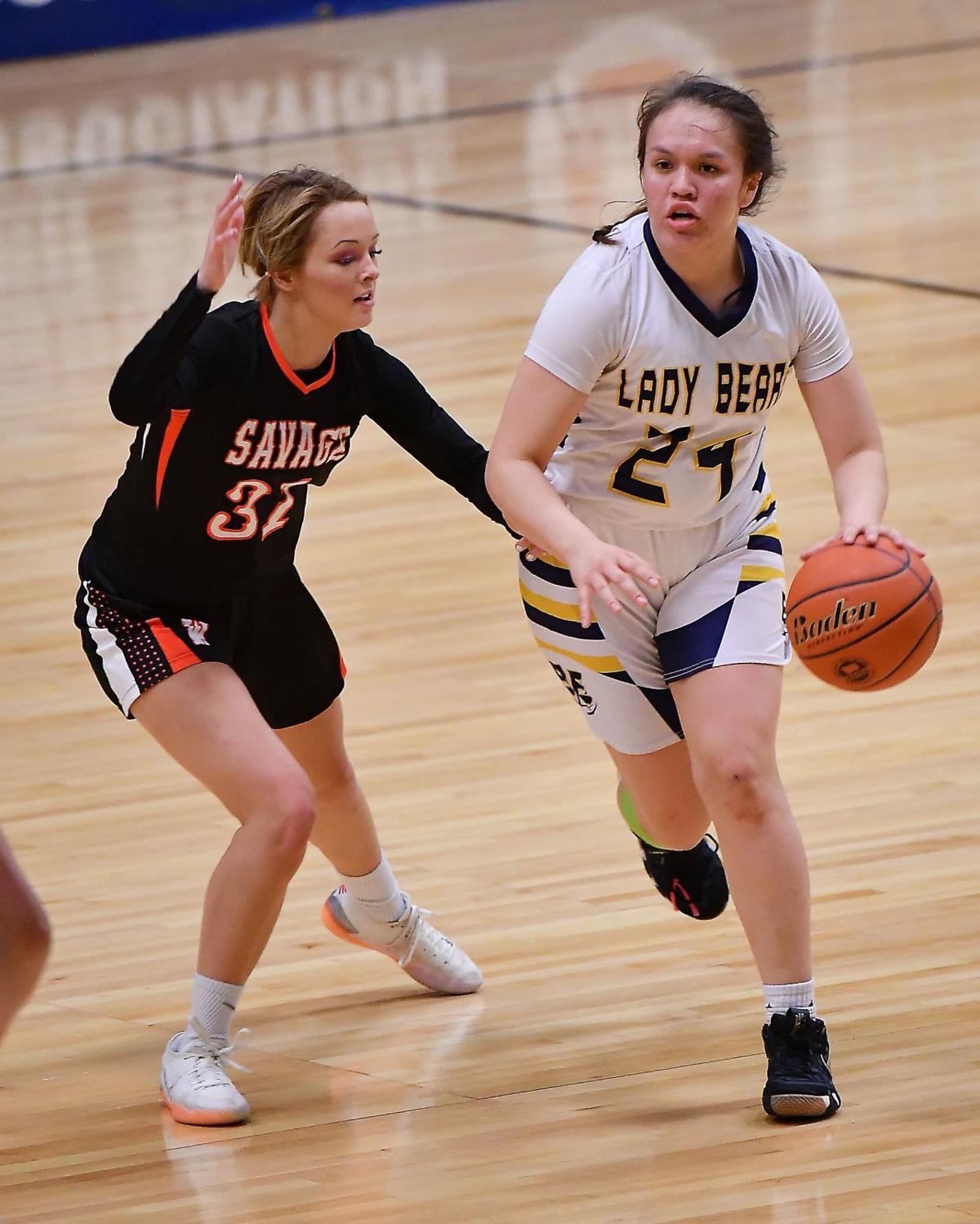 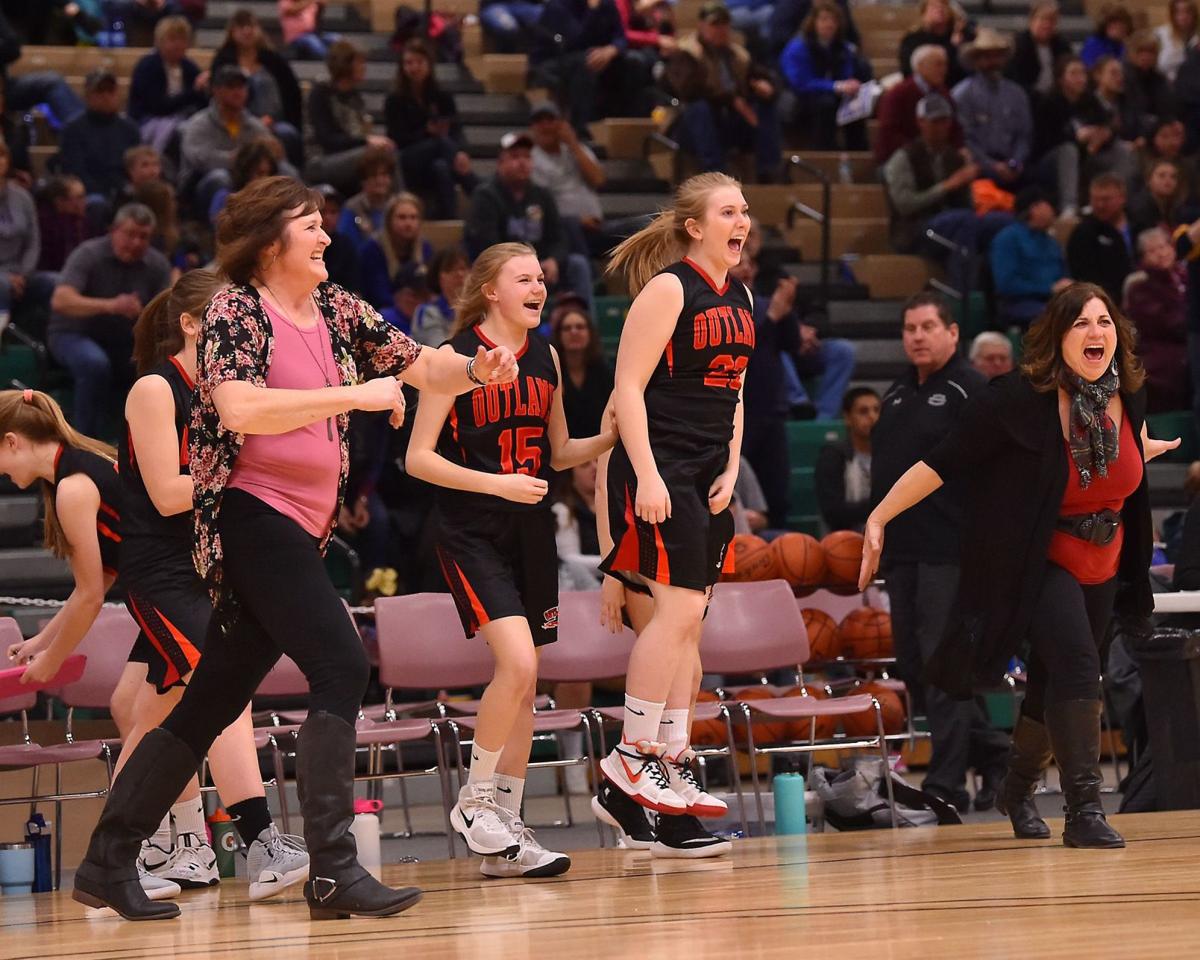 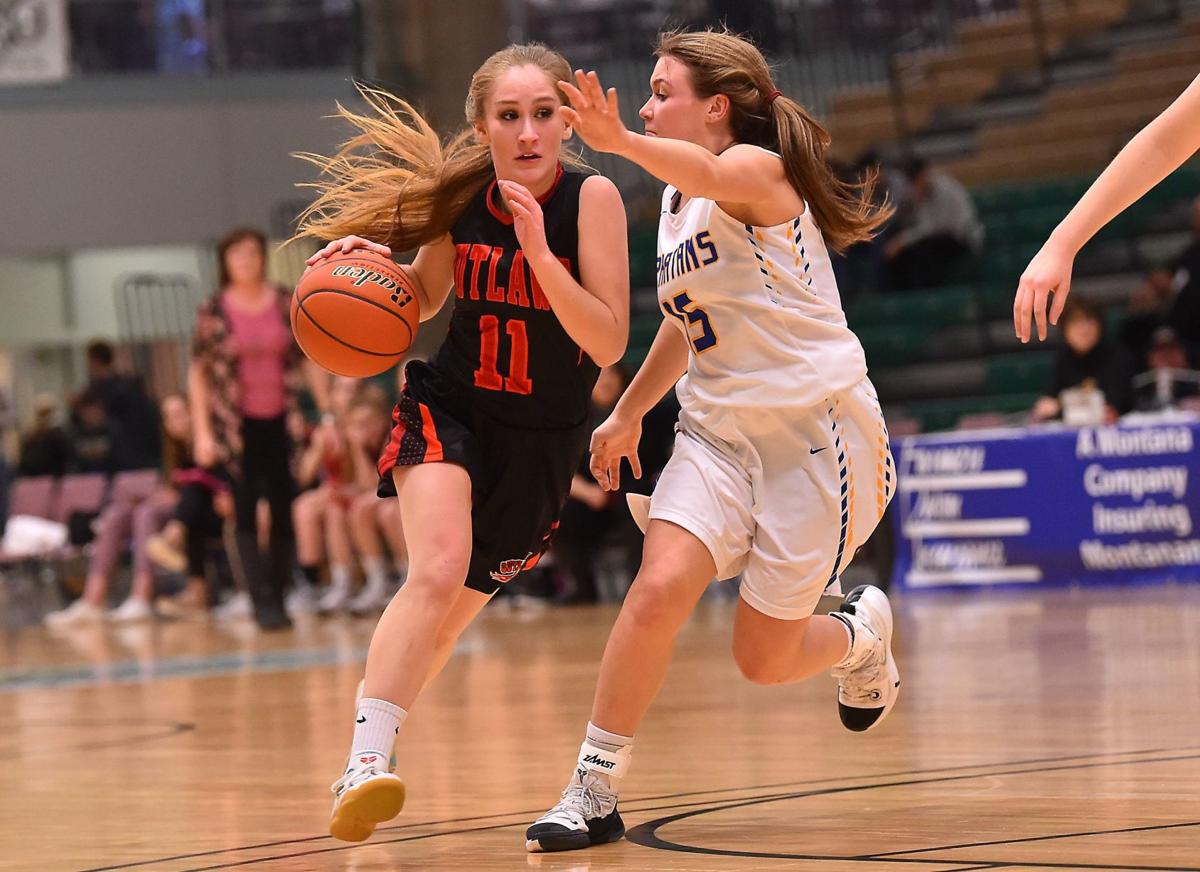 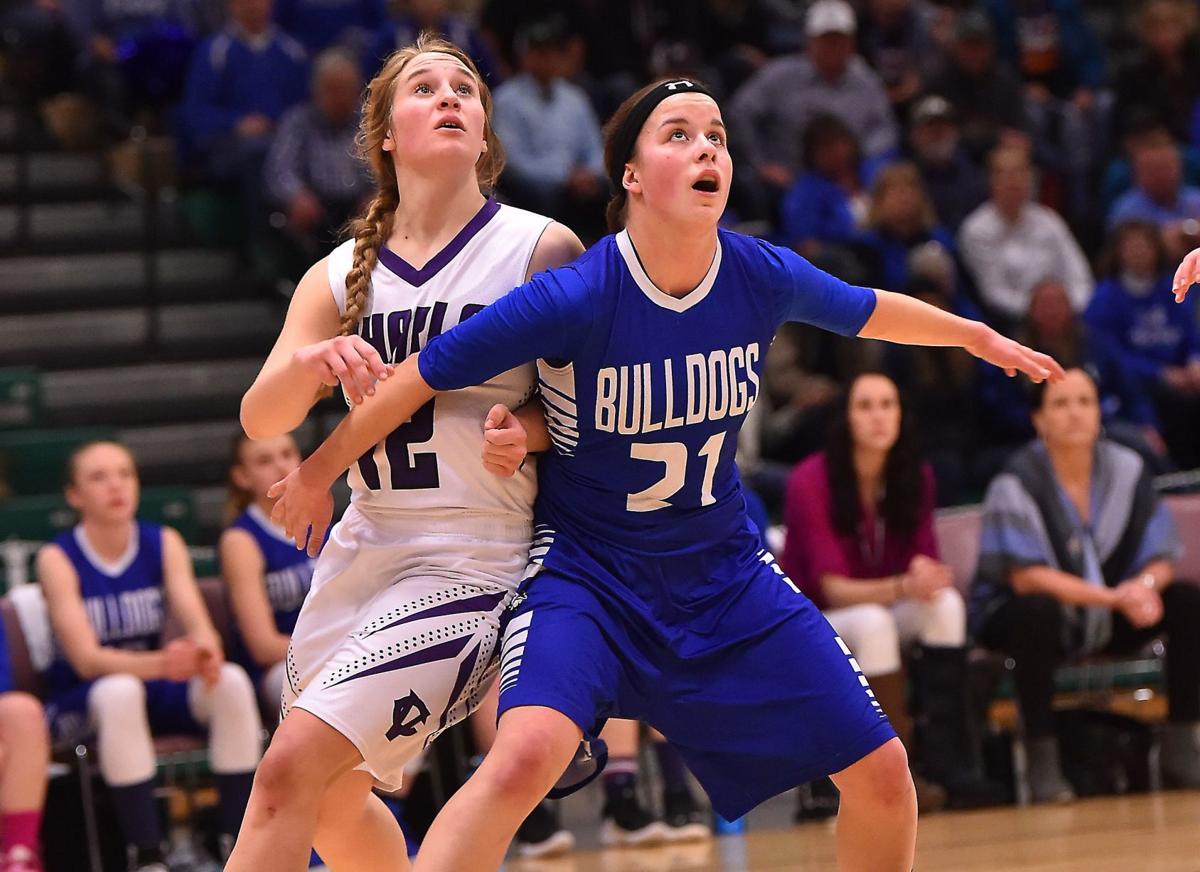 Box Elder earned a shot at a second consecutive Class C girls state basketball championship Friday night by racing to a big lead over Savage and holding off a frenetic press for a 59-51 victory at Four Seasons Arena. The Bears, No. 1 in the 406mtsports.com rankings most of the year, will face Roy-Winifred in a rematch of last week's Northern C divisional finale won 51-45 by the Outlaws.

Joelnell Momberg poured in 25 points and Lilly Gopher added 11 for the Bears, who aren't as big as last season when they topped Winnett-Grass Range but say they are quicker.

"It feels really great just because this is what we planned for at the beginning of the season," said Momberg, who also was credited with seven steals. "We worked the summer for this, so it feels amazing to know we reached this. But it's not done yet."

The sequel with Roy-Winifred assures that the state champion will come from the Northern C for the seventh time in eight years. Gardiner interrupted the string in 2015.

"Whoever's there we've taken the mentality we're going to go out there and do our best and compete," Box Elder coach Joel Rosette said, adding: "Which we're happy to play them — we're happy to see them. It's good to see Northern C representing well."

Haylie Conradsen scored 16 points, Soda Rice 14 and Kiana Miller had 11 points and 10 rebounds for Savage, which spent most of the season ranked second. They'll face Eastern C rival Wibaux for a chance to play for third place.

Box Elder pressed the entire game and led 19-9 after one quarter. The lead grew to as many as 17 points before Savage surged.

"That was a heck of a comeback by Savage," Rosette said. "They had us a little nervous there at the end."

Now the Bears are one game away from celebrating a second straight crown.

"It's the values of these girls," Rosette said. "They've worked so hard. They're resilient. You work hard  and good things happen. They believed in the program and they believed in each other."

After outlasting third-ranked Scobey 60-50 on Friday, the Outlaws now are one victory away from cashing in with their first state crown since Winifred won back-to-back championships in 1995-96 without the help of Roy.

"Yeah, somebody told me this is all gravy," Roy-Winifred co-coach Marietta Boyce said with a hearty laugh amid a crowd of exuberant supporters. "Whatever analogy you want to use, we're pretty happy. It's been fun. A lot of fun."

On a team noted for twin towers Dyauni Boyce and Madeline Heggem, the difference was the Outlaws' most diminutive starter. Junior Olivia Geer poured in 22 points on 8-for-11 shooting and stood tall as Scobey increased the pressure late. Boyce had 16 points and Heggem had all 11 of hers in the second half as the Spartans were forced to respect Geer and fellow guard Cassie Smith.

"It's pretty cool," Geer said. "I'm not a big scorer but this game I kind of came alive."

Said Boyce: "That was huge for Liv to step up. She was a true leader. She handled it."

In a back-and-forth game, Roy-Winifred pulled away with a 19-11 third quarter to lead 43-34 entering the final eight minutes. The Spartans scrambled and pulled within three points twice, but the Outlaws responded to each surge to shatter the dream of a team whose only defeat came to top-ranked Class B power Wolf Point — a team they also beat.

Kortney Nelson and Gracee Lekvold had 18 points apiece for the Spartans.

"It's tough when they start to tear up because they work so hard," Scobey coach Jedd Lekvold said. "It almost makes a guy want to tear up when you see that because they just put a lot of hard work into this. It's tough, but you know what? That's just life. You don't always get to win. You get to find out how you respond. We're not out of this thing yet and we get a chance to play tomorrow. That's what we're planning to do."

Scobey will have to win a morning game to get there. Roy-Winifred is already assured of an 8 p.m. date with either Box Elder.

"That's pretty frickin' awesome," Geer said. "It hasn't happened in awhile, and then to get a banner on the wall so that's pretty cool, too."

Hannah LaBree scored 15 points for Ekalaka in front of perhaps 75 blue-clad spectators watching from behind the team bench and another 50 or so watching on a big screen in the high school gym back home.

"That may not sound like a lot of people, but for Ekalaka it's a lot," LaBree said of her town of about 350 tucked into the state's southeast corner. "Our whole community is behind us. We wanted to do that for them as much as for us."

Twins Hannah and Heather LaBree and their youthful cohorts did it with a tireless full-court game that resulted in 30 Charlo turnovers and a slew of layups. After leading 26-24 at half, the Bulldogs used a 21-7 third quarter to pull away and give eighth-year coach Kayla Olsen her first victory at state.

For years, Olsen said, she tried to coax the girls into playing at a slower pace. They had other ideas.

"For years I tried to get them to try to learn how to slow things down and they don't like it so they just go, go, go," Olsen said. "We just use what we got. We don't have any bigs so we condition really hard."

For Charlo, it was a disappointing ending to an otherwise memorable season that began with the loss of their leading scorer from last year to a torn ACL and another key player who died in a car accident. The Vikings, who got 15 points from Destiny Manuel and 14 from Kaitlin Cox, won their divisional and lost only three games all year.

"It's been fun," Charlo coach Bret Thompson said. "We've come a long ways. It seemed like we would rise to the level most of the time, and that win against Arlee at divisionals ... I've never had an experience like that. It was awesome. I wouldn't trade it.

"We all wish that we could win championships but only one gets to. We'll take this."

The loud hoots and hollers emanated not once but twice from the Wibaux locker room, and why not?

The Longhorns, known for their illustrious football legacy, made some girls hoops history by fending off Arlee for their first victory ever at state.

Marni Schieffer scored 22 points and made what ultimately became the game-winning old-school three-point play with 1:33 remaining for a 62-59 lead. Her twin sister and fellow junior, Layni, scored 19 points and Ceara Miske added 18 as the Longhorns built a double-digit lead, saw Arlee overtake them in the fourth quarter, then regrouped late for the win in their first trip to state since 1994.

"It means everything, to be a part of it and to have this great group of girls," said Marni Schieffer, who also had 11 rebounds. "We worked together well team-wise. Sometimes we don't do it, but we came back and did it."

The Longhorns pushed the pace and routinely beat Arlee down the floor in the first half for a 39-28 lead at the break. The Scarlets then upped their defensive intensity in the third quarter and entered the final eight minutes with a 54-52 lead.

The score was 59-59 when Marni Schieffer tipped a cross-court pass and went nearly the length of the floor for a layup and foul. She made the free throw, and Layni Schieffer sealed the deal with two more shots with 18 seconds to play.

"It's a great accomplishment for these girls," said Wibaux coach Travis Bertelsen, a former Rocky Mountain College football player. "Wibaux has been pretty known for our football team and boys sports, and I think it's tremendous for these girls to get some recognition. They deserve it. They've worked really hard for it."

"It really sucks, but I'm excited for the next chapter in my life," Vanderburg said. "It was an honor playing with all these girls for the past eight years and being an Arlee Scarlet, and that we made it state three out of my four years of high school."

Wibaux has won numerous 8-Man football titles and won its first 6-Man crown in November. Now the girls basketball team has a shot at some hardware, too.

"We've heard all the talk about not being here since 1994 and stuff so I worried about getting satisfied by being here," said Bertelsen, whose team lost to Roy-Winifred in the opener. "That's what my biggest fear was. That's what my focus was — not just happy about being here but winning some games. I made the girls know we still had a chance for a trophy and that kind of fueled us a little bit. We've still got a chance to make a statement here in the state tournament. I'm just proud of them.

"I know these girls are going to remember this moment for the rest of their lives and that's a moment I'll remember."