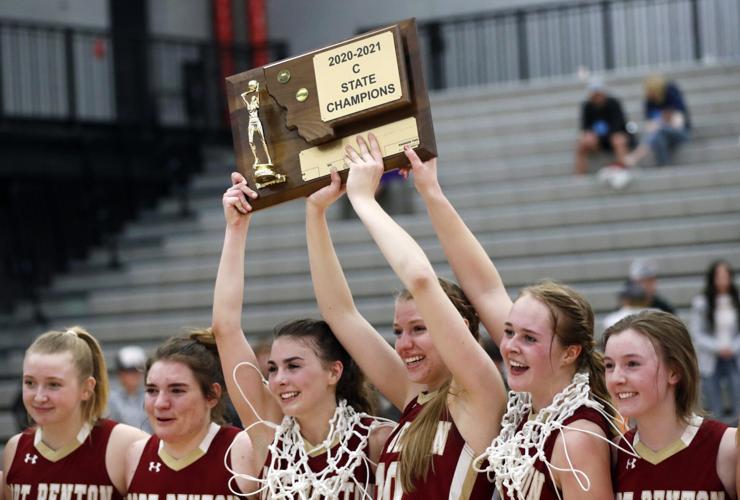 The Fort Benton Longhorns raise the first-place trophy after beating Saco-Whitewater-Hinsdale on Saturday to claim the first girls basketball title in school history. 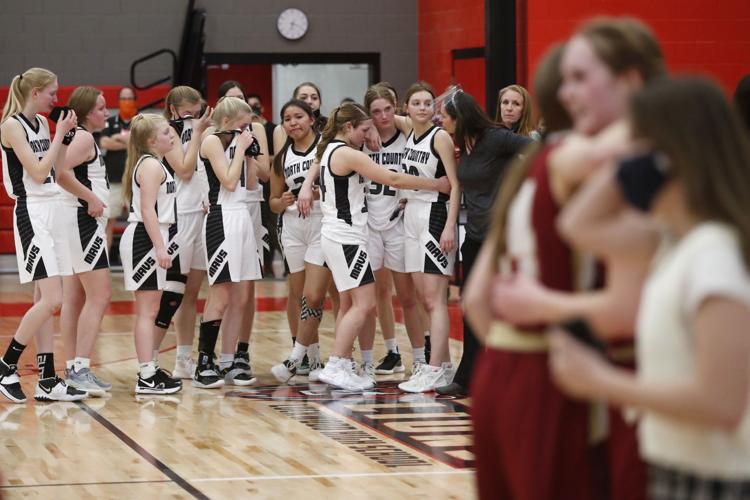 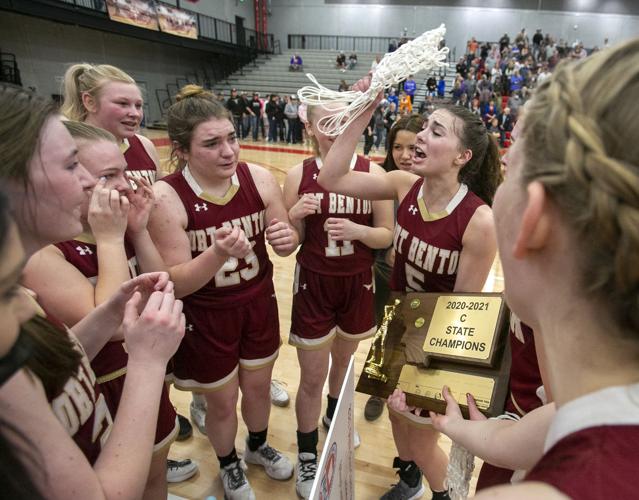 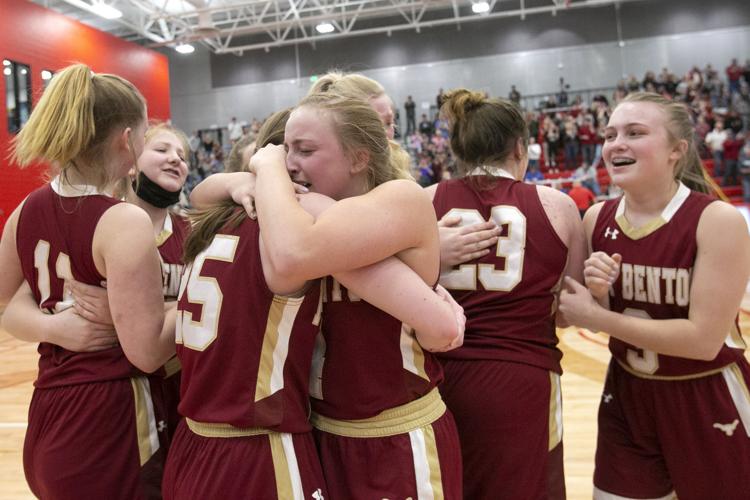 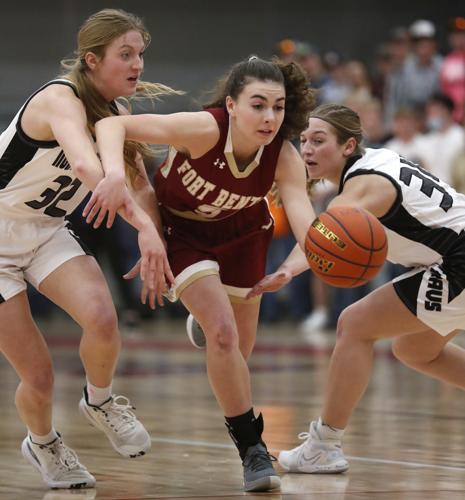 Fort Benton’s Aspen Giese splits the defense on her way to the basket against Saco-Whitewater-Hinsdale in the girls Class C championship game on Saturday at Lockwood High School. 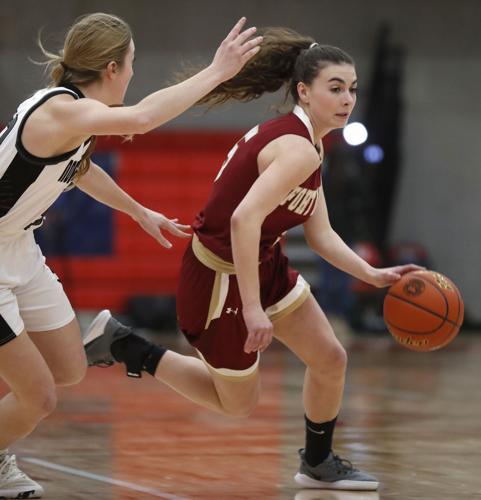 Fort Benton’s Aspen Giese drives to the basket against Saco-Whitewater-Hinsdale in the Class C girls basketball championship game on Saturday. 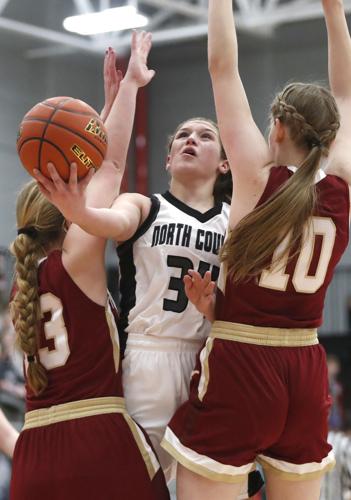 Saco-Whitewater-Hinsdale’s Jaycee Erickson splits two defenders while going up for a layup against Fort Benton on Saturday at the Lockwood High School gym.

The Fort Benton Longhorns raise the first-place trophy after beating Saco-Whitewater-Hinsdale on Saturday to claim the first girls basketball title in school history.

Fort Benton’s Aspen Giese splits the defense on her way to the basket against Saco-Whitewater-Hinsdale in the girls Class C championship game on Saturday at Lockwood High School.

Fort Benton’s Aspen Giese drives to the basket against Saco-Whitewater-Hinsdale in the Class C girls basketball championship game on Saturday.

Saco-Whitewater-Hinsdale’s Jaycee Erickson splits two defenders while going up for a layup against Fort Benton on Saturday at the Lockwood High School gym.

BILLINGS — Since she was little, Fort Benton’s Aspen Giese has admired the many state championship banners her school has hung through the years.

The Longhorns have had their share of success: There’s one championship each for football, boys basketball and wrestling, three for boys golf, four each for boys and girls track, seven for girls golf and so on.

The Longhorns hadn’t even been to a championship game since 2000, back when they competed in Class B. But the wait was worth it for Giese and her teammates, who broke open what was a close game between two excellent teams in the fourth quarter and celebrated with laughter and tears after the final buzzer sounded.

“You never see a banner for girls basketball on the wall,” Giese said after sharing jubilant hugs with her dad and younger sister Emerson. “I wanted to be on the team that put it up there, and now we’re going to put it up there.”

“I’ve been dreaming of this day for so long,” she said. “This team, we worked so hard. To be here is incredible, and I can’t even put into words how excited we are. I never want this to end, honestly.”

Giese, one of the top players in Class C, had a big first half with 16 points while hitting four 3-pointers. But the game remained tight well into the second half as Saco-Whitewater-Hinsdale clamped down on Giese, holding her without a field goal after halftime.

Thus, a string of key baskets by Ashlee Wang late in the third quarter and early in the fourth allowed the Longhorns to pull away.

Wang’s 3-pointer from the corner beat the third-quarter buzzer and gave Fort Benton a 49-46 advantage. It proved crucial, as the Longhorns never surrendered the lead the rest of the way.

Wang converted a three-point play, scored on an offensive rebound and put-back, and hit another 3 in the fourth to propel the Longhorns. Maci Molinario and Emerson Giese also made key baskets during what was a 13-1 surge.

Wang scored all 17 of her points in the second half while shooting 7 of 10 from the floor. It was a welcomed breakout for her: Wang scored eight points total in Fort Benton’s other tournament wins against Plentywood and Manhattan Christian.

“I was hungry to get those shots in and get it done,” Wang said. “I just needed to keep shooting. I knew I was going to have a moment where it was going to fall eventually. I felt it. That was definitely a changing part of the game.”

“I just didn’t feel like they missed much. They hit a lot of big shots,” said Saco-Whitewater-Hinsdale coach Amber Erickson, noting Fort Benton’s 57% shooting clip in the second half. “I thought defensively we had some breakdowns that we don’t normally have, which cost us.”

The Mavericks hit their share of big shots, too. Kia Wasson’s 3 early in the third and a Jaycee Erickson drive a couple minutes later both kept the game tied. A deep 3-pointer from Erickson knotted the game again at 46-46 with 43 seconds left in the third quarter.

But those were precursors to Wang’s heroics, and the Mavericks never could grab the lead in the second half. The loss was the first of the season for Saco-Whitewater-Hinsdale, which was seeking the first championship for its seven-year-old co-op known informally as North Country.

The Mavericks (23-1) came into the tournament with one of the best résumés of any Class C team, with regular-season wins over Melstone (which hadn’t yet lost prolific scorer Draya Wacker to a knee injury) and Class B Malta.

But the biggest prize eluded them.

“That’s when I really knew we were something special,” Amber Erickson said. “Playing in this game was the ultimate goal. Even though it didn’t go our way, we reached an ultimate goal. These kids met every challenge head on.”

Jaycee Erickson had a game-high 20 points while hitting three 3s. Kaitlyn McColly had 15 and Wasson added 12.

Aspen Giese, who has signed to play college basketball at Montana State Billings, finished with 19 points while hitting 4 of 6 3-pointers for the Longhorns (22-2). Emerson Giese had 14, and shot 10 of 11 from the foul line. Molinario added 10 points and seven rebounds.

When it was over, Fort Benton hoisted the championship trophy and reveled in their history-making victory. The only thing left to do now is to raise that banner.

“I don’t know if it’s hit me yet. I’m happy for the kids. I love these kids. They’re going to enjoy this.”

State tournament trophies can be hard to come by in Class C basketball.

A year ago to the day, the Roy-Winifred girls were forced to share the championship hardware with Belt when COVID-19 concerns put a stop to those proceedings, and they’d rather have had the opportunity to win an outright title this time around.

But after losing a semifinal thriller to Saco-Whitewater-Hinsdale on Thursday, it wasn’t to be. Still, the Outlaws rallied to claim the third-place prize earlier Saturday with a 54-30 victory over Manhattan Christian.

The Outlaws succeeded despite graduating three starters from last year’s team and losing point guard Laynee Elness to a knee injury in the offseason.

“We lost some huge parts of our team, and to come in and make it back to state and get third, I’m proud of us,” Madeline Heggem said. “Thursday kind of sucked, but we knew we weren’t done yet. Even though it was a hard loss, we came back and got it done.”

Manhattan Christian was led by Eliana Kuperus, who had 10 points and 11 rebounds. The Eagles, though, turned the ball over 24 times and shot 29% to that of 47% by the Outlaws.

Roy-Winifred finished the season with a 21-4 record. Manhattan Christian ended 23-3.

Montana Grizzlies are staying in the Big Sky — for now, and AD Kent Haslam explains why