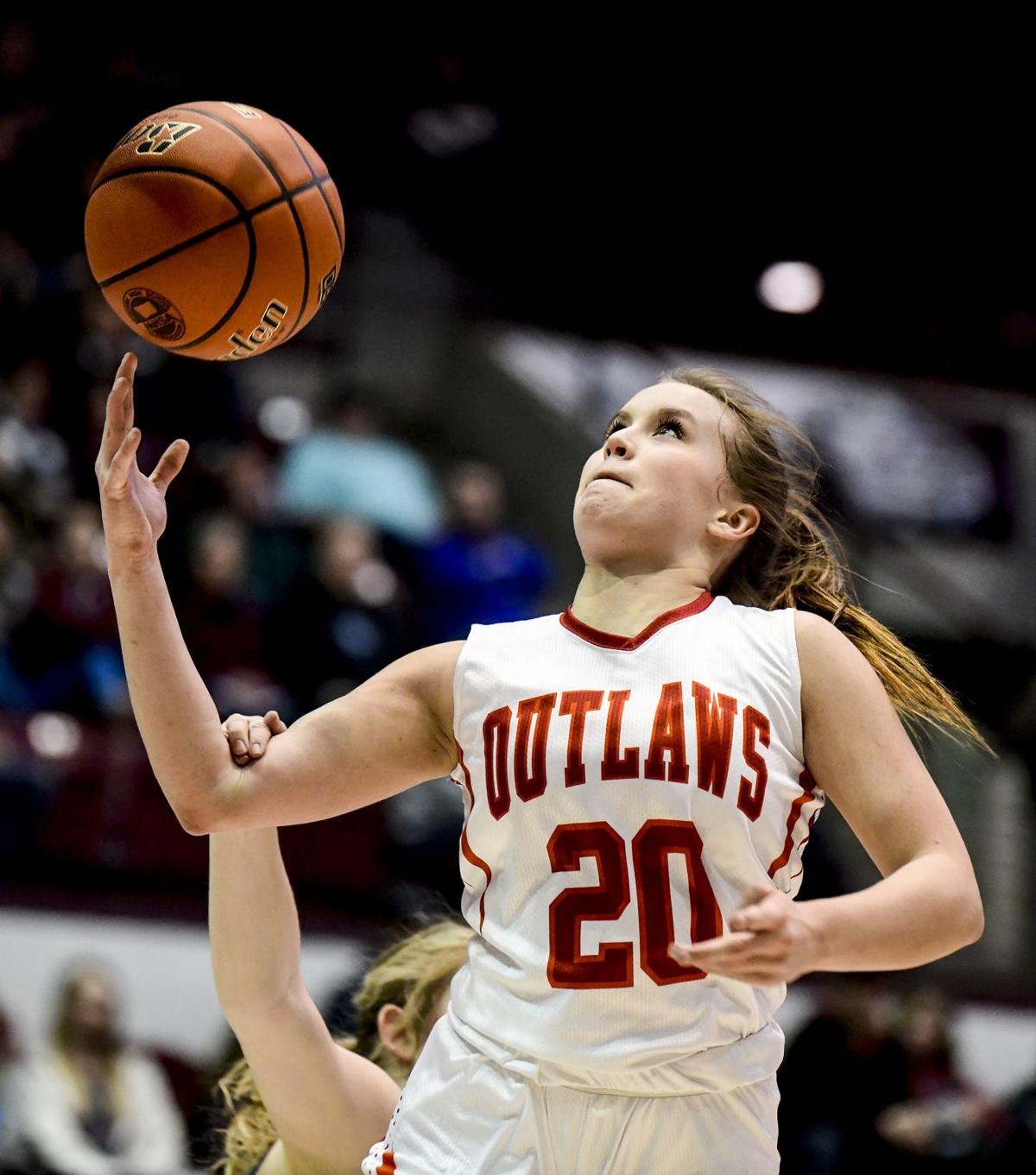 Roy-Winifred's Laynee Elness is fouled while driving to the basket during the Outlaws' State C girls basketball semifinal game at Dahlberg Arena on Friday night. The Outlaws defeated the Bulldogs, 62-19. 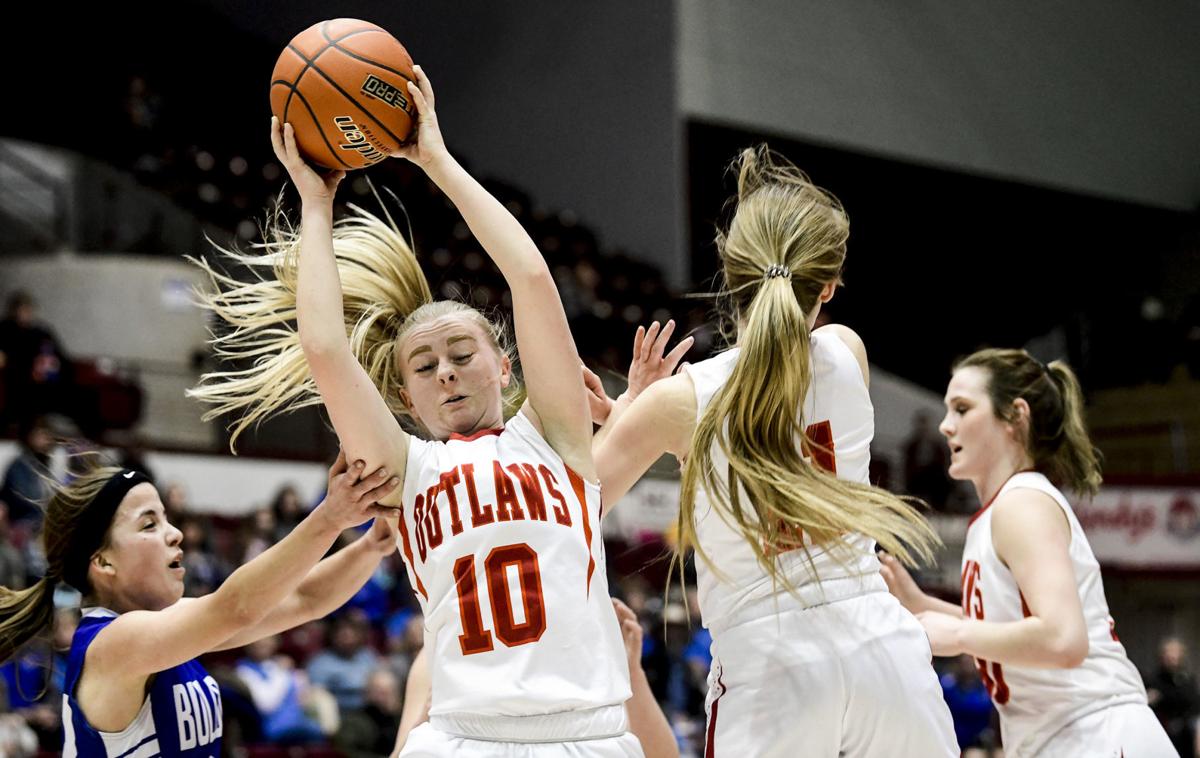 Roy-Winifred's Cassie Smith, second from left, grabs a loose ball out of the air while being guarded by Ekalaka's Hannah LaBree, left. 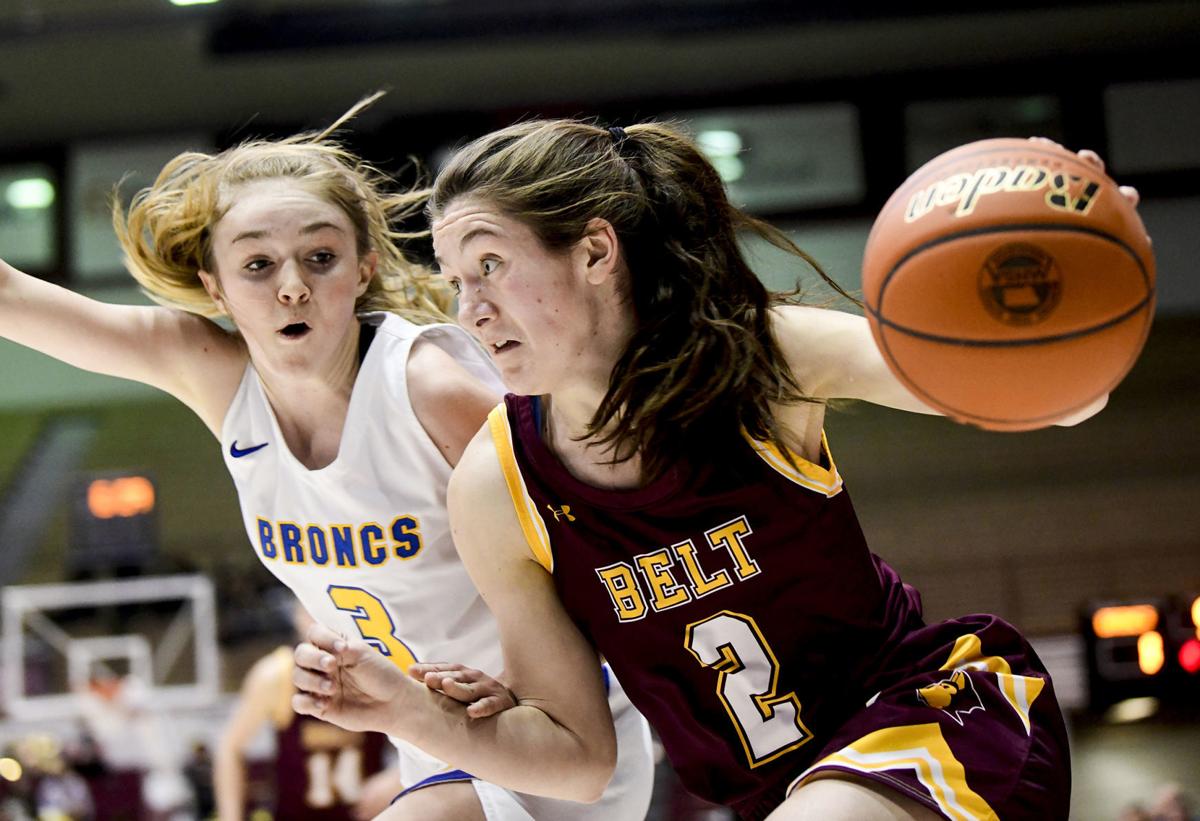 Belt's Kolby Pimperton (2) dribbles the ball along the baseline against Melstone's Draya Wacker (3) during their Class C semifinal basketball game at Dahlberg Arena on Friday night.

Roy-Winifred's Laynee Elness is fouled while driving to the basket during the Outlaws' State C girls basketball semifinal game at Dahlberg Arena on Friday night. The Outlaws defeated the Bulldogs, 62-19.

Roy-Winifred's Cassie Smith, second from left, grabs a loose ball out of the air while being guarded by Ekalaka's Hannah LaBree, left.

Belt's Kolby Pimperton (2) dribbles the ball along the baseline against Melstone's Draya Wacker (3) during their Class C semifinal basketball game at Dahlberg Arena on Friday night.

MISSOULA — Boos rained down and tears of sadness were shed inside Dahlberg Arena on Friday night when it was announced that the Montana High School Association had canceled the remainder of all the state tournaments Friday night following the announcement of four confirmed cases of coronavirus in Montana.

Roy-Winifred and Belt, Northern C rivals, will share the Class C girls basketball state title as co-champs. Belt has eight seniors on its team, while Roy-Winifred has three seniors, all on whom had their high school basketball careers come to an unexpected early ending. Belt coach Jeff Graham said that’s the worst feeling for him.

“The toughest thing is I’ve got eight seniors who’ve been with me since kindergarten,” Graham said as tears began to pour down his cheeks. “They’re just the greatest people. Their parents are phenomenal. You say it every year, you don’t get eight often. We’ve just got super kids. I didn’t know what to say to them. I just started crying because they were all crying. They’ve got to do what’s in the best interest for everybody and keep everybody safe. It’s kind of a bummer.”

Just announced by the PA announcer in Missoula that the MHSA has suspended the remainder of the State C boys and girls basketball championships.

Roy-Winifred, the defending state runner-up, won the first semifinal of the tournament with a 62-19 win over Ekalaka but had left before the announcement. Belt, which missed out at state the past two years after 10 consecutive placing finishes from 2008-17, followed with a win in the next semifinal, posting a 46-26 win over Melstone.

Roy-Winifred and Belt both finish with identical 24-2 records and went 2-2 against each other. They were 1-1 against one another in the postseason, with those two games decided by a total of three points.

“That’s what’s so disappointing is you have a group of kids that have worked this hard and played a great team like Winifred, man, we’re 2-2 against each other,” Graham said. “It’s just a great rivalry. It’s just sad. I’m glad they at least let us play a couple games, we didn’t get shut down, so we’ve got to be happy with that. We’ve got to think of the positives, and I’m just glad I’m not an MHSA guy or someone that has to make those calls. They’re doing whatever’s in the best interest for us, and we appreciate it.”

Graham said he would’ve been up to play the game with no fans in attendance.

“Oh yeah, baby,” he said. “I think the Winifred girls would say the same thing. If someone’s got it, and who knows how bad it is, we can always get together and go play it in Hobson or something like that. We’re close to each other.”

Belt used a 13-0 run in the first quarter to build a double-digit lead it would never surrender in a 46-26 win over Melstone in their semifinal game.

Four players scored in double-figures for Belt, which shot 35.7% (15 of 42) from the field. Brooke Schraner led the way with 11 points, while Kolby Pimperton, Shelby Paulson and Lindsey Paulson all scored 10 points apiece.

Melstone had opened the tournament Thursday with a win in its first state appearance since 1977.

“That was fun,” Roy-Winifred co-head coach Marietta Boyce said. “We got a little slow spotting them five points, but then we decided to play ball and never looked back. Whenever you can clear your bench in a semifinal game, that’s pretty sweet. They’ve been working hard for this right here, but we’re still hungry.”

The Outlaws used their height to finish with a 45-26 edge on the boards, including 17-5 on the offensive glass as they racked up the second-chance points. They limited Ekalaka’s shot attempts by forcing 19 turnovers while committing just nine themselves.

“This is 10 times better than last year because I was a manager as a seventh grader, so it’s awesome to be playing with them” Heggem said. “We have really good shooters, so we can go inside-out or we can take it at them on the post, too, because we’re so tall. It's a good feeling to be here. That's for sure.”

They extended their run to 19-0 before Ekalaka got on the board about two minutes into the third quarter to pull within 38-13. Roy-Winifred led 50-17 after three quarters and pushed its lead as large as 43 points, 62-19.

“We came out tentative, so we talked about how we need to take it at them, and we did,” Marietta Boyce said. “I think Laynee (Elness) sparked us and went in there and started to make it happen. Then everybody else just played along. When you have five threats on the floor with the bigs inside and the shooters outside, it’s pretty tough.”

Ekalaka had won Thursday for its first victory in the winner’s bracket in five trips to state under ninth-year head coach Kayla Olsen.

Scobey methodically pulled away from Seeley-Swan for a 40-28 win in a loser-out game Friday, sending the lone Missoula-area team home with an 0-2 record.

Scobey led Seeley-Swan 9-3 after one quarter, upped that to 22-13 at the half and pushed the lead to 34-23 heading to the fourth quarter. The Spartans moved on to another loser-out game Saturday.

"Them changing the pace on us and us not being able to pressure when we needed to was difficult," Seeley-Swan head coach David Cahoon said. "We figured it out towards the end but were already down by 10 or so points."

Seeley-Swan had a 41-35 advantage on the boards, including 15-11 on the offensive glass. The Blackhawks, however, did commit 26 turnovers to Scobey's 15.

Westby-Grenora added to its eight-point halftime lead by outscoring Manhattan Christian 17-5 in the third quarter to put the game out of reach and earn a 52-36 win in a loser-out game Friday.

Westby-Grenora senior Jenna Rust tallied a double-double with 26 points on 11-of-22 shooting while grabbing 17 rebounds, including seven on the offensive glass. Elizabeth Field added 14 points, and Samantha Ledahl dished out seven assists.

Manhattan Christian got a team-high 16 points from Eliana Kuperus, who added nine rebounds. The Eagles missed all 14 of their 3-point attempts.

Coverage of the Class C boys and girls state basketball tournaments March 11-14, 2020 from the University of Montana.