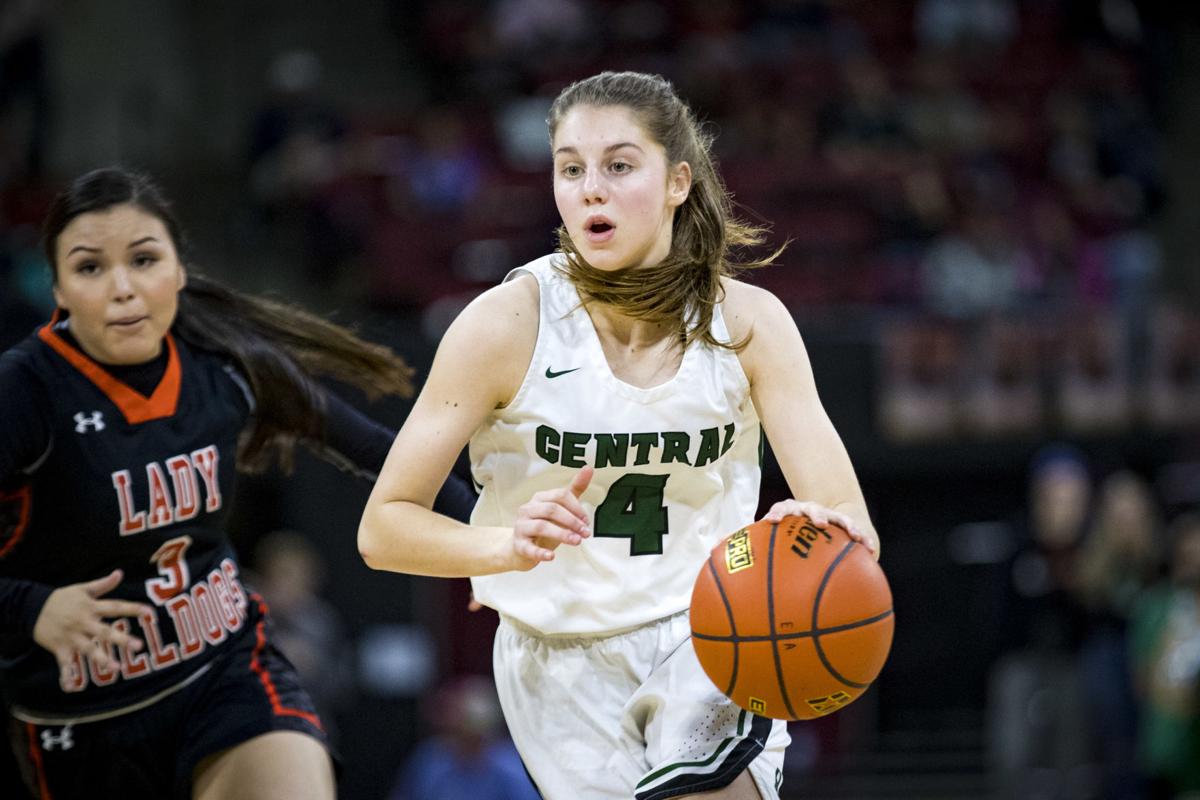 Billings Central's Mya Hansen dribbles the ball up the court against Hardin during the Eastern A Divisional tournament at First Interstate Arena in Billings on Saturday, Feb. 29, 2020. 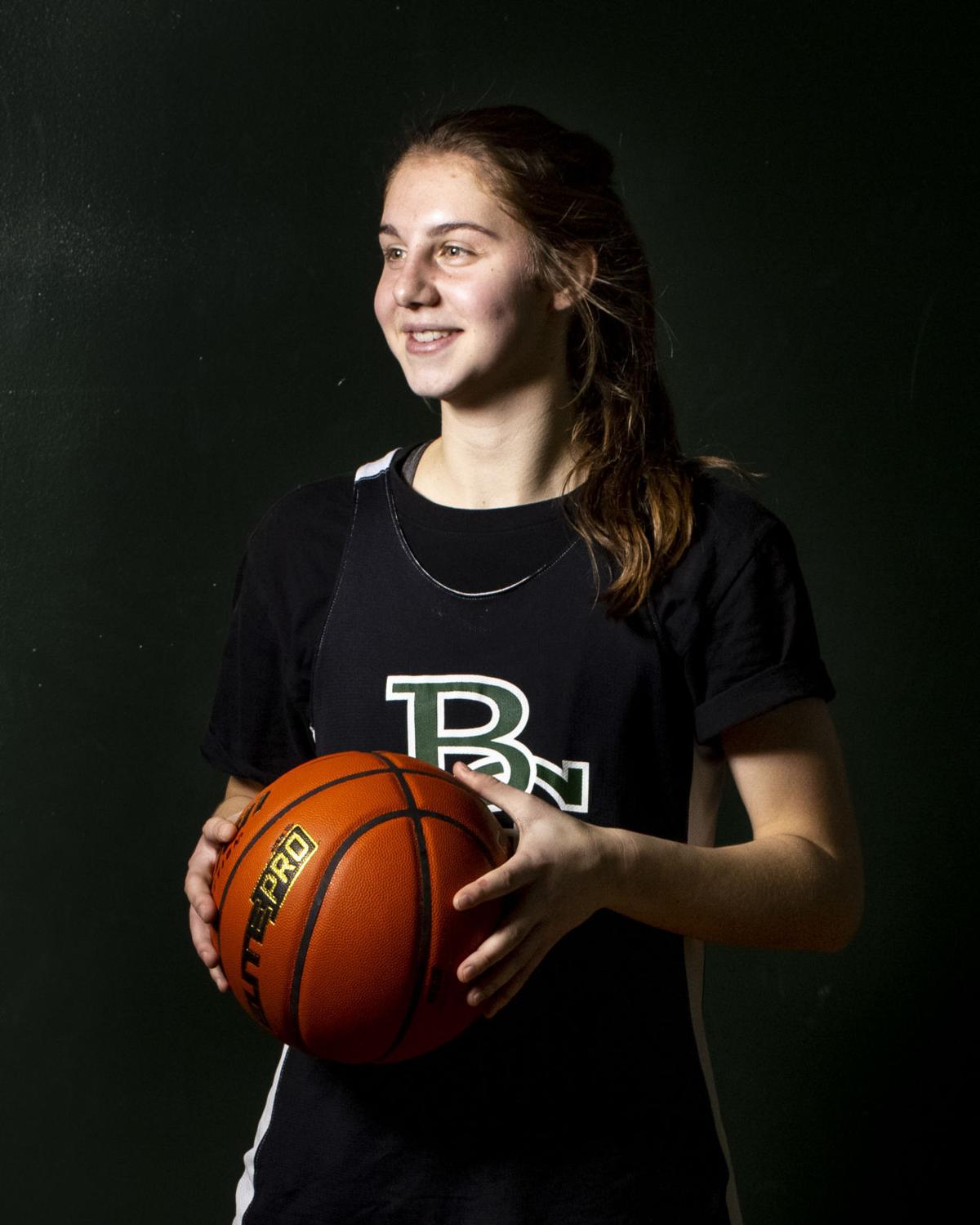 In her previous sports seasons, Mya Hansen has played in the 2019 Class A state soccer match, has been a 2020 co-champion in girls basketball, and played a key role on the Billings Central's 2020 state championship volleyball team. 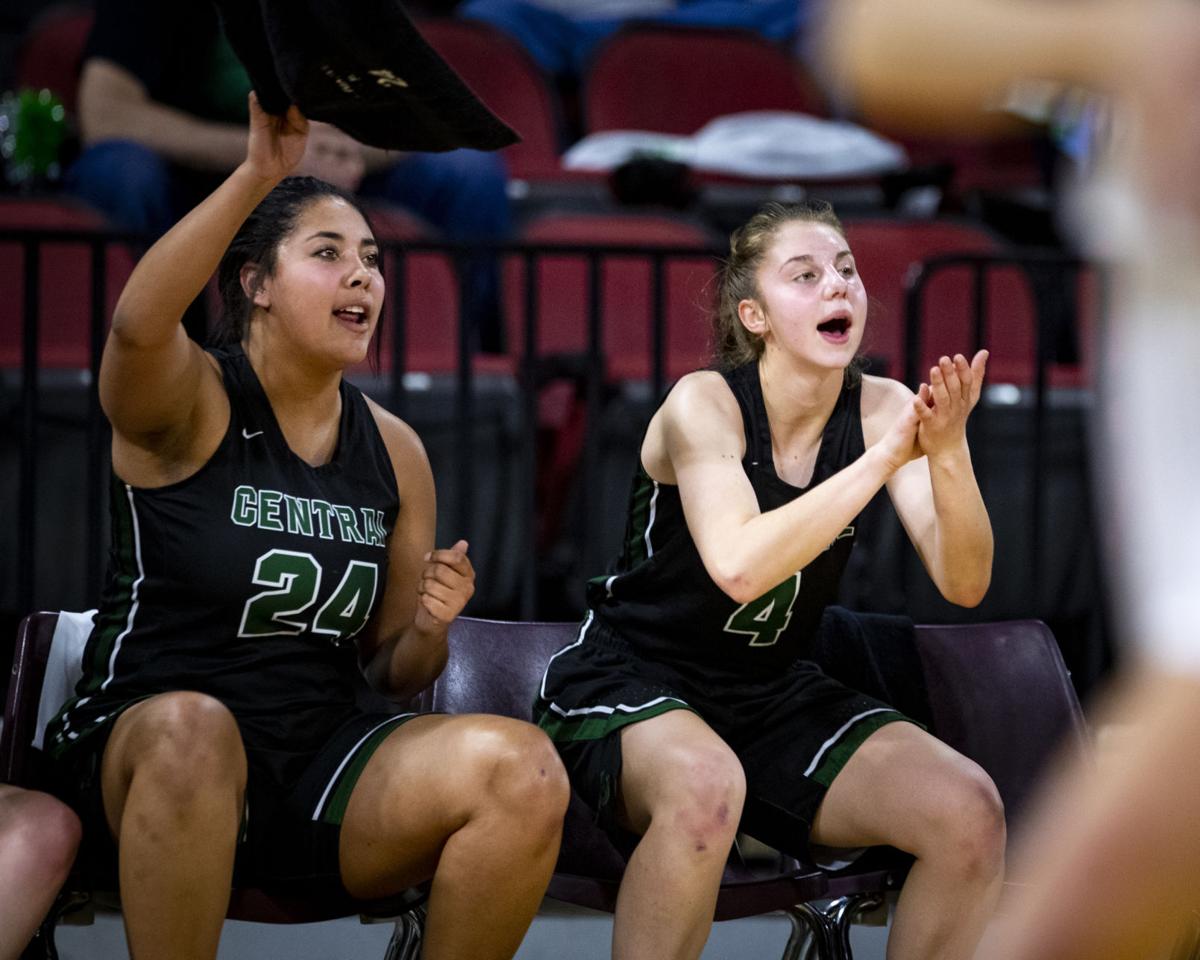 Billings Central's Olivia Moten-Schell (24) and Mya Hansen (4) cheer from the bench during last year's Class A state basketball tournament. Being a good teammate is one of the most important things to Hansen. 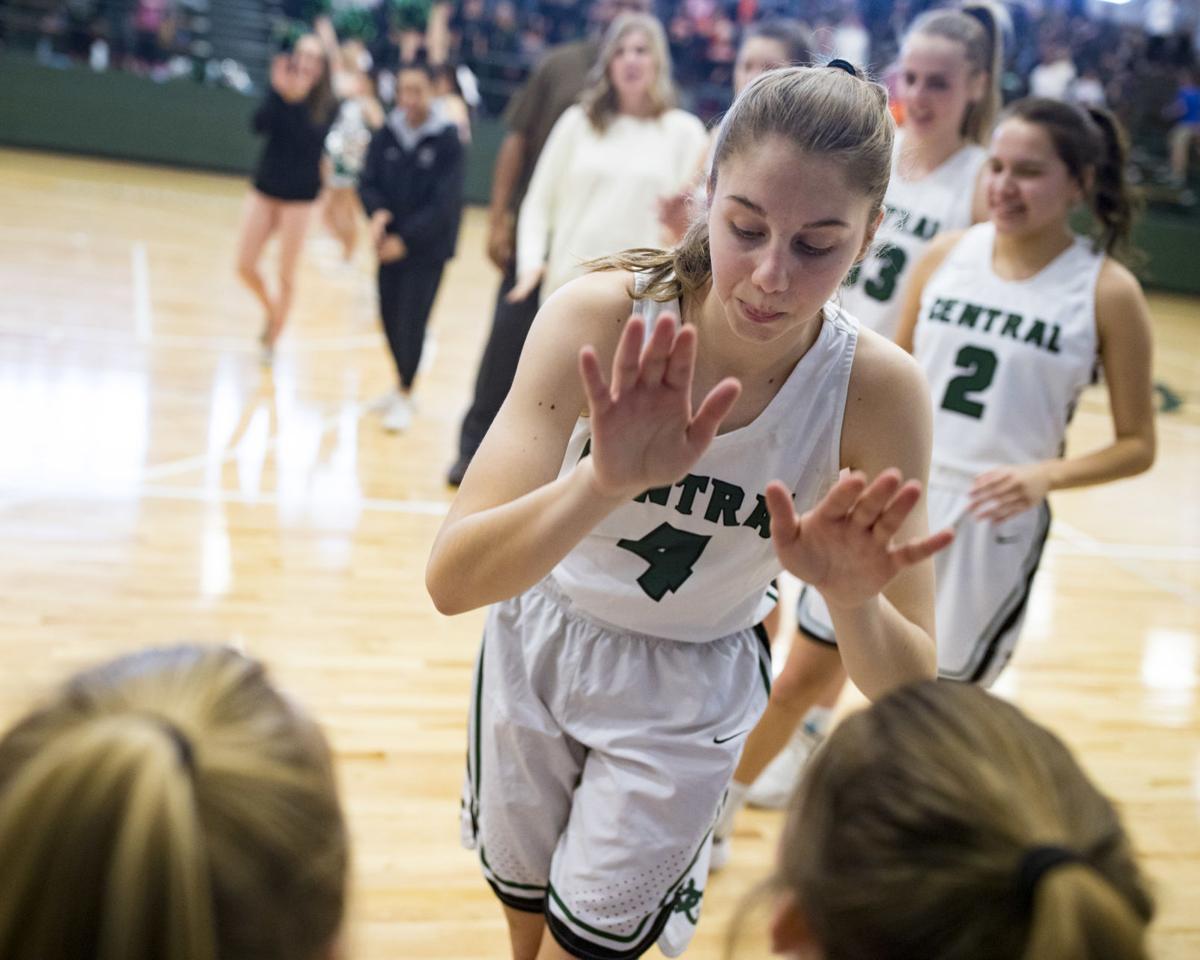 Billings Central's Mya Hansen (4) high-fives her teammates as she is introduced before a game last season. 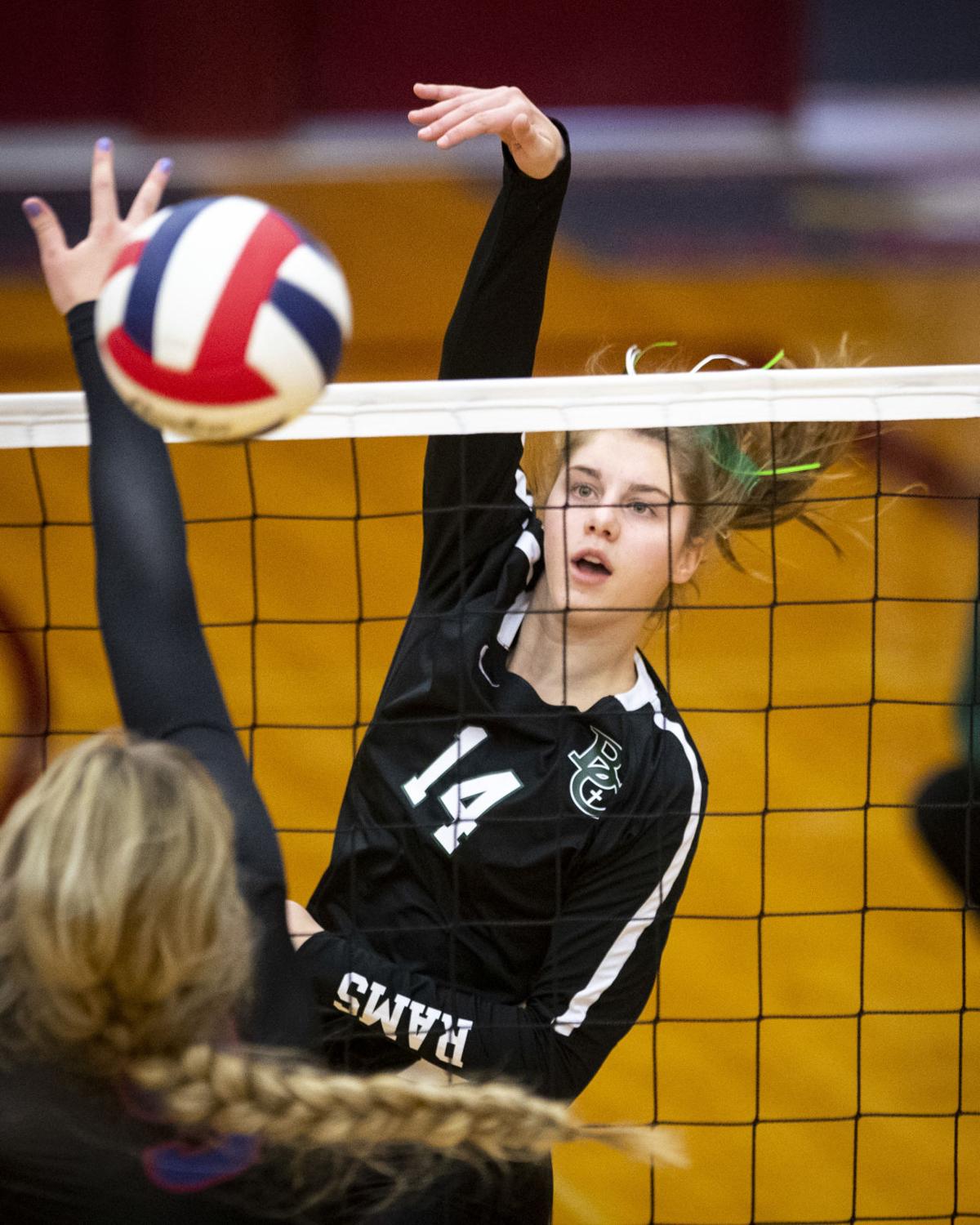 Billings Central's Mya Hansen (14) spikes the ball past a Columbia Falls blocker during the Class A state championship match Sidney High School in Sidney on , Nov. 14.

Billings Central's Mya Hansen dribbles the ball up the court against Hardin during the Eastern A Divisional tournament at First Interstate Arena in Billings on Saturday, Feb. 29, 2020.

In her previous sports seasons, Mya Hansen has played in the 2019 Class A state soccer match, has been a 2020 co-champion in girls basketball, and played a key role on the Billings Central's 2020 state championship volleyball team.

Billings Central's Olivia Moten-Schell (24) and Mya Hansen (4) cheer from the bench during last year's Class A state basketball tournament. Being a good teammate is one of the most important things to Hansen.

Billings Central's Mya Hansen (4) high-fives her teammates as she is introduced before a game last season.

Billings Central's Mya Hansen (14) spikes the ball past a Columbia Falls blocker during the Class A state championship match Sidney High School in Sidney on , Nov. 14.

BILLINGS — It’s been a heck of a ride for Mya Hansen these past 12-plus months. And we’re not even talking postponed or canceled seasons, shared experiences of the coronavirus pandemic with countless other athletes.

For Hansen, her transfer from Laurel to Billings Central following her freshman year of high school has been one of immersion, an attempt to fit into a new school, new sports programs and a new community.

It’s not something she takes lightly, either. She’s the product of sports-minded parents after all, Tricia and Pat, the former Laurel boys and girls basketball coach who is spending a few hours a week helping out the Rams now. As if that wasn't enough, Tricia gave birth to Mya during the 2004 Class C boys state basketball tournament in which Pat was coaching. Talk about a sign.

So while players all over the sporting spectrum hear coaches lecturing about embracing “the process,” well, Mya has been living it.

In the fall of 2019, playing her first athletic season at Central as a sophomore, Hansen was the starting goalkeeper for the Rams soccer team, which went all the way to the title match before falling to her former Laurel teammates. A few months later, there was Hansen hitting a game-tying 3-pointer at the buzzer in the Eastern A Divisional basketball semifinals, a game the Rams eventually won.

Two weeks later, the Rams were crowned co-state champions with Hardin after the state tournament was canceled following the semifinals due to the encroaching pandemic.

And just last month, Hansen was putting down kills and blocks, helping the Rams to the Class A state championship after having switched fall sports, going from soccer to volleyball without a hitch.

“Wow,” she said when asked about the appearances in three different state championships — with two titles — over the span of a year. “I hadn’t even actually thought about that. It is kind of amazing.”

Hansen is so focused on the “doing” that she doesn’t spend time dwelling on the “have done.” That ability to constantly look forward, to constantly work on getting better, is part of what makes Hansen special.

“She’s wise beyond her years,” said Central girls basketball coach Jetton Ailes. “I think the biggest thing that sticks out about Mya is she makes everyone better. It’s just something that you have to experience. The impact she’s made in a year is, I think, beyond anybody’s expectations when she came.

“It’s only going to continue. She’s just a special kid. She’s very humble, but there’s a competitive fire in the quiet kid that burns very, very deep. She’s going to do whatever it takes to make sure herself and her teammates succeed.”

That starts with being a good teammate, and Hansen's way to become that is pretty simple: Focus on being your best today. Long term results will come if you concentrate on the short term.

“I’ve just been very fortunate to be around two parents who have just taught me good lessons of right ways to win, wrong ways to win, how to be just as a person,” Hansen said. “I’m fortunate enough to know that they told me whatever I do to go in to help a team and do whatever I can to help others, not focus on me.”

Just a junior, Hansen has already given a verbal commitment to play basketball at the University of Montana. She averaged 17.1 points and 2.4 assists per game last season for the Rams. Her signature moment, though, came in that divisional semifinal game against Havre.

Twice on crucial possessions late in the game, Havre's Sadie Filius swiped the ball from Hansen, which led directly to four Blue Ponies’ points in a tight game. There’s no shame in that; Filius is one of the top defensive players in the state.

What Hansen won’t allow, however, is for her confidence to wane. She knows what she’s capable of, and knows how much her teammates rely on her steadiness. Hansen doesn’t shy from the big moments.

So, as time wound down, she launched a game-tying 3-pointer from the top of the key at the buzzer and buried it. The Rams went on to win 64-60 in overtime and went on to earn a state championship, an honor even if it was shared.

“Mya is a very, very, very mentally tough kid,” Ailes said. “She channels mistakes in the right way. We challenge these kids to have a short-term memory because the game of basketball is so fast and sometimes people can get caught up into letting one mistake turn into another and turn into another and before you know it, what should have been a two-point swing turns into an eight-point swing.

“And Mya has the ability to channel a mistake into ‘I’m not going to let it happen again’ or channeling it into motivation to want to succeed even more.”

Success seems to come easy for Hansen, who will team with Solei Elletson (9.6 ppg, 43 team-high steals) and Isabelle Erickson (7.9 ppg) to give the Rams plenty of returning experience. With nearly the entire team back from last year, they have high expectations for this season.

It wasn’t until three days before volleyball tryouts started that Hansen decided to give that sport a try. She had played volleyball in the junior high program at Laurel, but hadn't yet attempted to play at the high school level. And look how that turned out.

So what’s next? Golf, maybe?

Hansen laughed at the suggestion, saying her friends goad her into trying to letter in all four fall sports. But Hansen said that’s not happening. Though her mom was a big runner, Mya said she doesn’t have the mental or physical capacity to give cross country a try.

It looks then, that Hansen has settled on volleyball and basketball.

“I'm just always thinking what can I do next, what success can I bring to my team?" Hansen said, coming back to her go-to philosophy. "That’s kind of the main reason, too, in picking a fall sport that whatever I did I just wanted to help benefit that group and bring success to the team. It’s just great to know that I played my role well and I did what needed to be done to bring success.”

Class A girls basketball overview: Is Billings Central poised to fly solo after sharing with Hardin?

Neither team was happy about sharing last year's title, and with some potent players returning both could be ready to keep the crown for themselves.