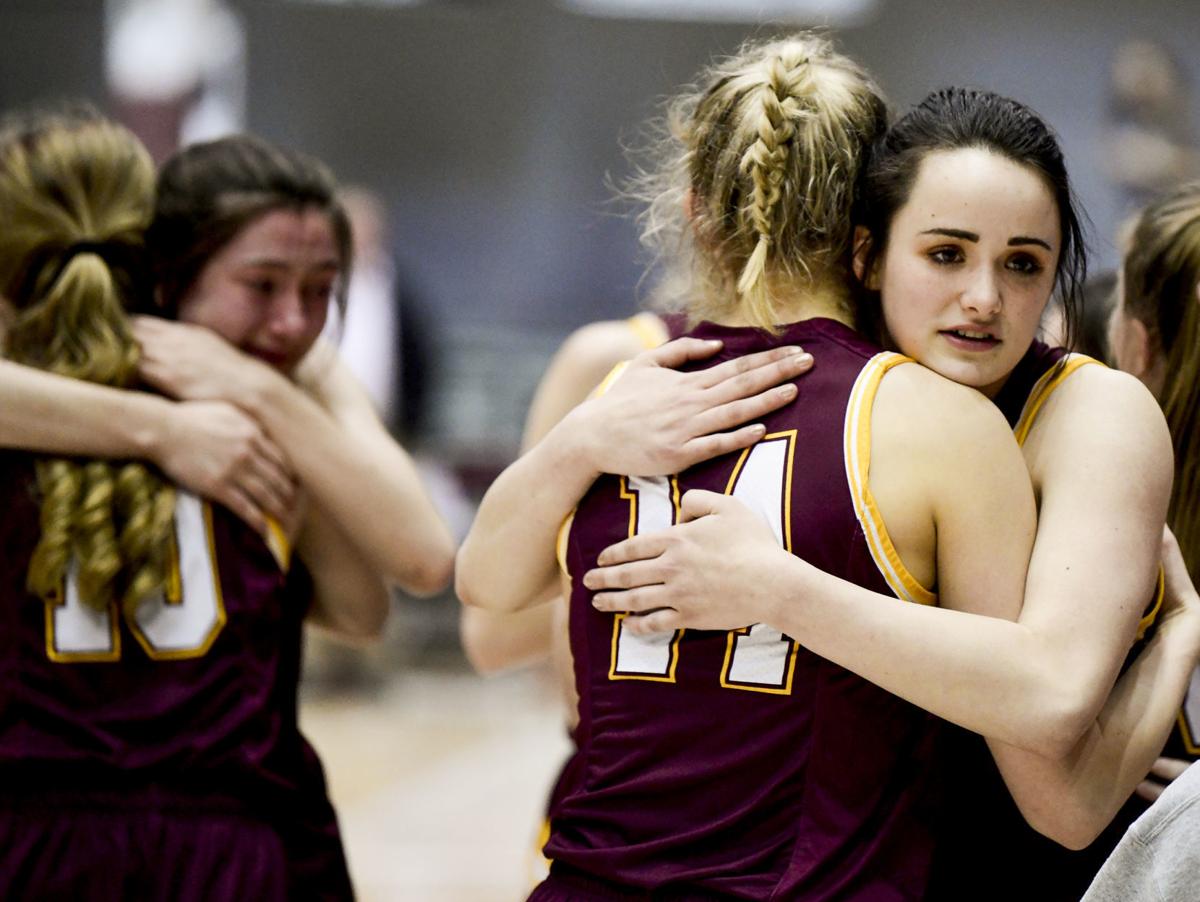 Belt's Grace Norstedt, right, hugs Shelby Paulson, left, after the announcement of the cancellation of the State C girls basketball championship game amid concerns over coronavirus. 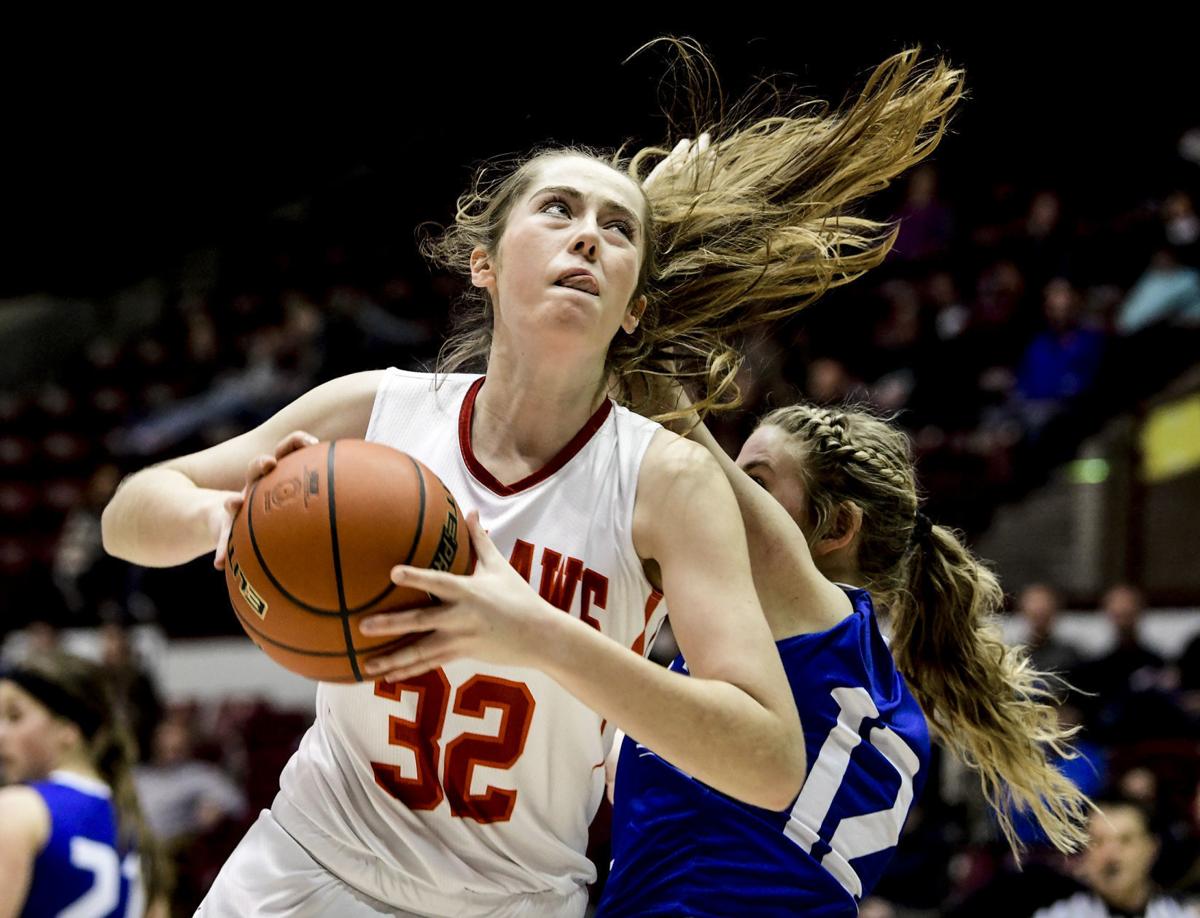 Belt's Grace Norstedt, right, hugs Shelby Paulson, left, after the announcement of the cancellation of the State C girls basketball championship game amid concerns over coronavirus.

Why not meet at a gym in the middle — say, Stanford — and let the girls from both District 8C powers meet for the fifth time this season and duke it out for the unofficial state championship?

“Man, I betcha I’ve had a hundred people ask me that,” Belt coach Jeff Graham said with a chuckle Wednesday. “Everybody in this area would love to see that. I know the girls would like to play one more time. It would be pretty cool.”

Said Outlaws coach Marietta Boyce: “Yeah, everybody’s been saying that. I just don’t know how realistic it is.”

True enough. Though Montana High School Association executive director Mark Beckman said any of the co-champions are welcome to do just that, the world has changed dramatically thanks to the escalating coronavirus outbreak. What was possible even Monday is impossible now.

Neither team has celebrated satisfactorily.

“It’s just been a little crazy,” Boyce said. “We haven’t really been able to celebrate because between the virus and the weather, we all just went home and stayed home. It’s really been kind of anti-climactic.”

After the initial shock and tears Friday night, at least Belt had a fleeting moment. When the Huskies’ arrived home, they were escorted through town by the obligatory flashing lights of fire trucks and sheriff’s rigs.

For the Huskies, who’d fallen short of the state tournament the past two years after a run of 10 consecutive appearances that includes five titles, missing out on the finale initially was excruciating.

“It was weird. We went from pure elation to getting through the handshake line and hearing the announcement that the season was over,” Graham said. “That was probably the toughest. At least you knew you had one more game and then all of a sudden it’s stripped from you. Looking them in the eyes afterward was really tough. I didn’t have words.

“Then to see all the parents and fire trucks, and all the girls smile. That was a big deal to them.”

A snowstorm kept the team on lockdown Friday night in Missoula, and by the time the bus arrived in Winifred on Saturday locals were tending to winter business.

“With the weather the way it was and everybody calving, when we drove through Main Street there were maybe three people standing outside cheering,” Boyce said with a laugh. “We had a bigger escort leaving town than coming back. We had ambulances, fire trucks and horses and everything else. On the way back it was pretty quiet.”

A hollow feeling still permeates Outlaw country. They’d already clinched a berth in the final and were having dinner in Missoula when social media lit up their phones.

“A lot of tears,” Boyce said. “Especially the seniors. But we’ve been trying to keep it in perspective and keep a positive view. At least we got to that point. We do get that hardware. That’s the only reconciliation I can give them.”

Both coaches expressed pride that the co-champions not only come from the vaunted Northern C but within the same district. And the abiding respect is mutual.

Though perhaps it's fitting that the co-champs went 2-2 against each other, with Belt winning the district and Roy-Winifred the divisional, make no mistake: They wanted to play.

For Roy-Winifred, the urge was especially strong. While Belt has been a fixture and won state titles in 2012, 2013, 2014, 2016 and 2017, until finishing runner-up to Box Elder last year the Outlaws hadn’t been here since 1996 when Amy Meckling and Co. led Winifred past Big Sandy.

Last year, Boyce has often said, was “gravy” for her young squad. This year, with her Montana State Billings-bound daughter Dyauni leading the way, was supposed to be the year, and other than going 2-2 in knock-down drag-‘em-outs against Belt, the Outlaws were dominant.

“After last year, the girls were really hungry,” Boyce said. “They had a lot of expectations. But they rose to them when they beat Belt in the divisional championship. That was pretty sweet. And I felt the girls played really well in the two games (at state). Friday night (against Ekalaka) the girls played awesome from start to finish. I was so very proud of them.

“It was fun celebrating and seeing all the fans we did have, even though unbeknownst to them it was their last game of the season.”

Both programs are uncertain about what’s next.

The Belt community gathered Sunday and planned a fete for Tuesday, but the school closure leaves that celebration in limbo. Roy-Winifred couldn't even get that far, and so the Outlaws are also left to wonder how they’ll celebrate.

“Hopefully we can get together, even if it’s 10 or 50 people — I don’t know what the magic number is now,” Boyce said, referring to instructions regarding public gatherings in the wake of the coronavirus outbreak. “Hopefully we’ll have a little bit of closure that way.”

Why, maybe even when the gyms reopen the girls could meet halfway — say, Stanford — and settle it on the court in what ostensibly would be a best-of-5 series.

Given the uncertainty, and the increasing loss of practice time, it’s probably not feasible. But it is, as Boyce put it, “nice to be able to talk about it.”

“Maybe the kids will just get together on their own,” Graham mused. “I can just watch and enjoy. It’d be kind of cool.”

More in Montana sports scene touched by coronavirus (20 of 68)

The State C girls basketball tournament reached day two in Missoula this morning. Check back throughout the day for updates.