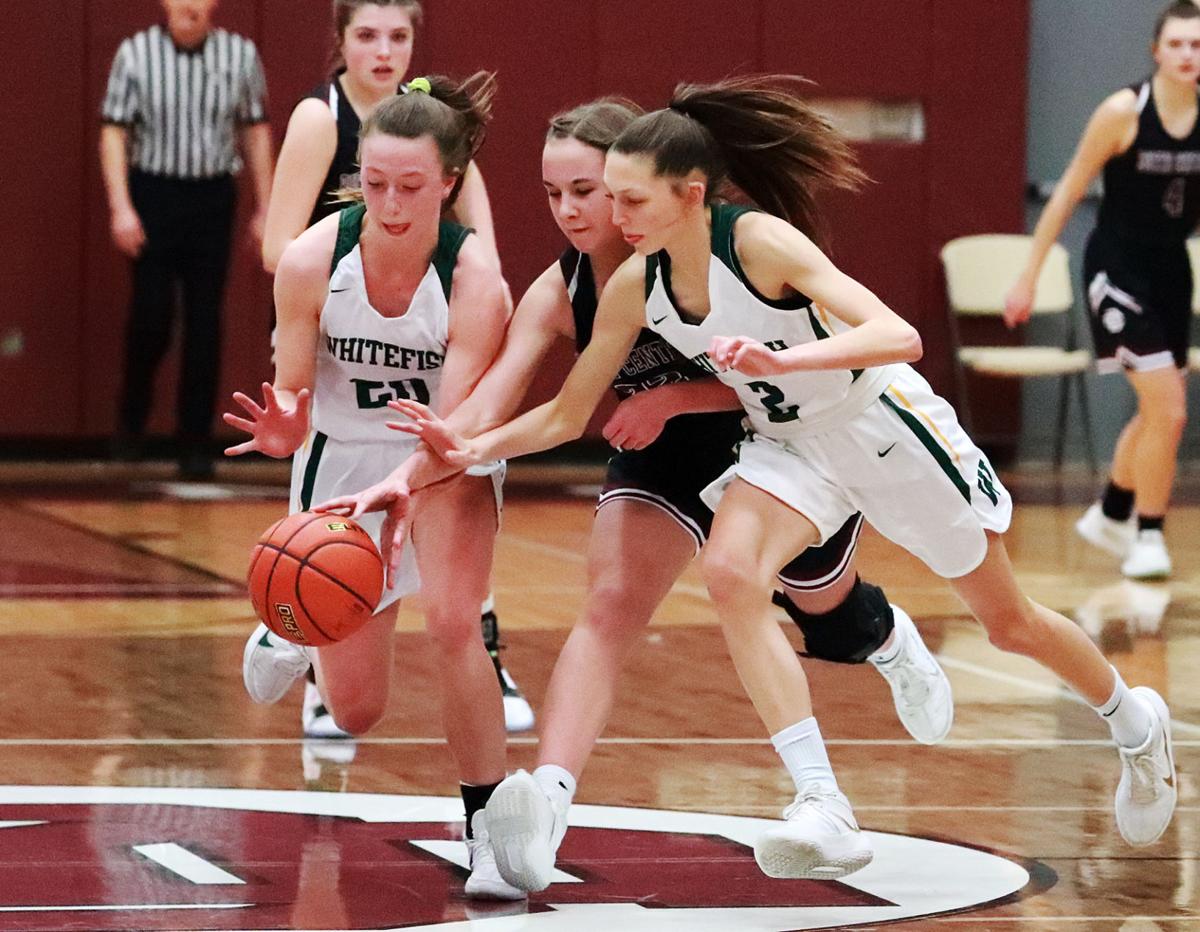 Butte's Brooke Badovinac fights for a loose ball with Whitefish's Mikenna Ells and Erin Wilde on Friday afternoon at the Maroon Activity Center for the 2021 Western A Divisional Basketball Tournament in Butte. 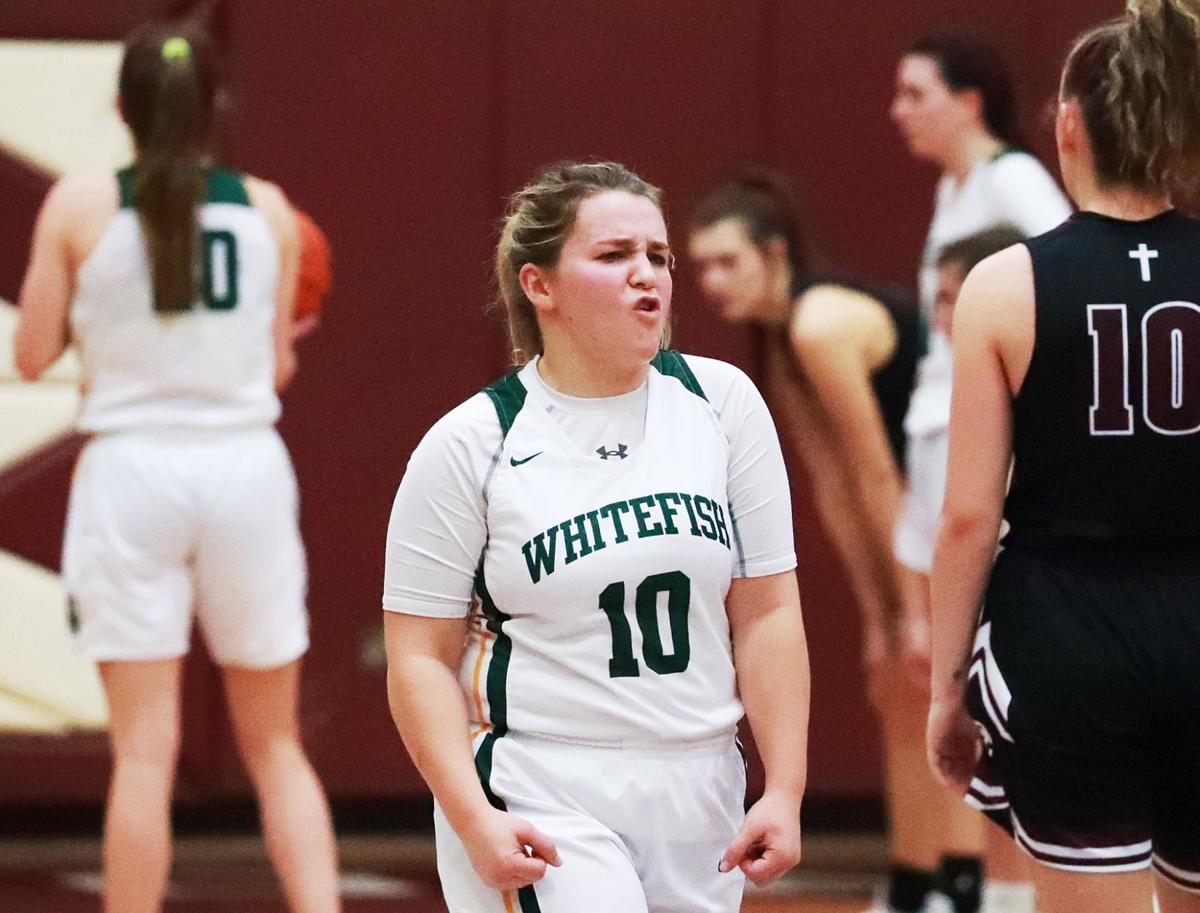 Whitefish's Ashton Ramsey reacts as her teammate steps to the free throw line late in the fourth quarter on Friday afternoon against the Butte Central Maroons during the Western A Divisional Basketball Tournament in Butte.

Butte's Brooke Badovinac fights for a loose ball with Whitefish's Mikenna Ells and Erin Wilde on Friday afternoon at the Maroon Activity Center for the 2021 Western A Divisional Basketball Tournament in Butte.

Whitefish's Ashton Ramsey reacts as her teammate steps to the free throw line late in the fourth quarter on Friday afternoon against the Butte Central Maroons during the Western A Divisional Basketball Tournament in Butte.

BUTTE — After Friday's 63-44 win for the Bulldogs, the Whitefish girls have advanced to the consolation semifinal of the Western A Divisional Tournament, while the Butte Central Maroons have played the final game of their season.

The Bulldogs will secure a spot in the state tournament with a win Saturday. For the Maroons, their seniors hit their home floor for the last time on Friday.

"We knew that today was give it all you got, we knew it was win or go home," said Whitefish coach Bob Bolam. "The girls played really hard and I'm proud of that. Going forward we've got to be a little more patient and take care of the ball. We have to limit our fouls, we committed too many today."

Both teams ran a zone defense to begin Friday's game, but the Bulldogs appeared to have a clear advantage rebounding and in the paint. Brook Smith finished the game with 21 points for the Bulldogs, and scored the ball well early.

Whitefish had a 13-9 lead at the end of the first quarter. It was in the second quarter that Gracie Smyley began to go off, driving into the paint with ease at times.

Despite being outsized inside, the Maroons battled and kept things close through two quarters. The Bulldogs led 25-20 at halftime.

"When we came out of halftime we were up with a pretty good lead, we knew they were going to pressure us," Bolam said. "It was shaky at times but we got some good looks because we expected them to pressure us. We got some lay-ins because of it and that helped."

Pressure is exactly what the Maroons brought in the third quarter. The team switched from a half court zone to a full court trap, but did not come up with turnovers at the rate they had hoped for.

It seemed that when one Bulldog player got tired, went cold or got into foul trouble, another came in to fill the gap. This was the case with Jadi Walburn, who made a three-pointer upon entering the game in the third quarter.

"We worked hard after a tough loss yesterday, we were hoping to win that first one," Bolam said. "So we knew today was give it all you got."

Whitefish held a 41-30 lead after three quarters, and stretched their lead further in the fourth quarter. Smith finished with a game-high 21 points for the Bulldogs, while Gracie Smyley finished with 15. Ashton Ramsey added 11.

The Maroons were led by Brooke Badovinac who finished with 15 points. Delaney Hasquet contributed 11 points and Sofee Thatcher had seven.

"I'm proud of our girls, we had a good season," said Butte Central coach Meg Murphy. "We lost five seniors but I am very proud of them and look forward to next year. It's hard to end the way we did but we played two good teams and could not find a bucket."

The man behind the muscle: New UM strength coach Dan Ryan works to make Griz 'the most physical team in the country'

Reversal of fortune? Dawson men get another crack at first national tourney berth