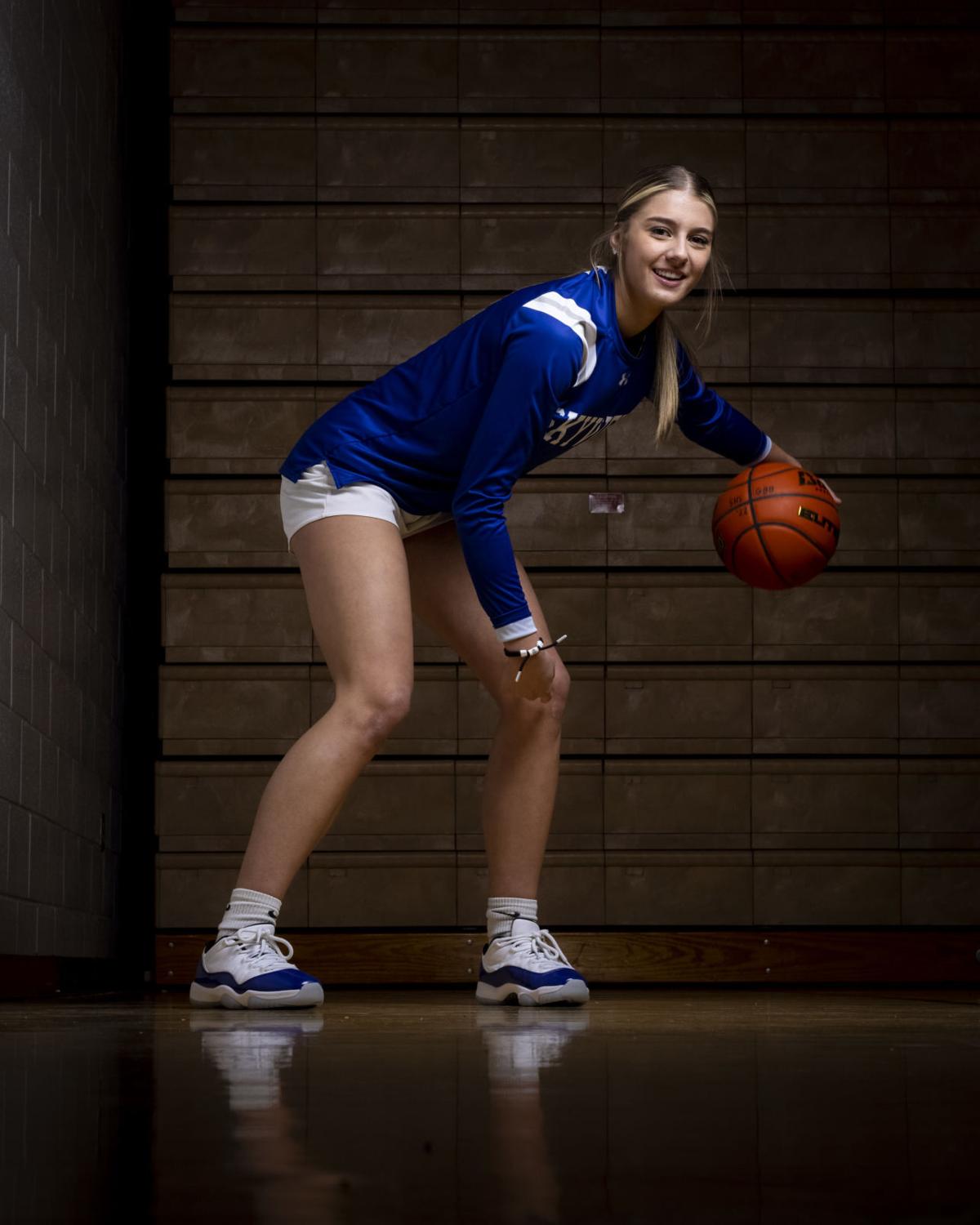 Brooke Berry is a four-year starter for the Billings Skyview girls basketball team. She's closing in on 1,000 points for her career. 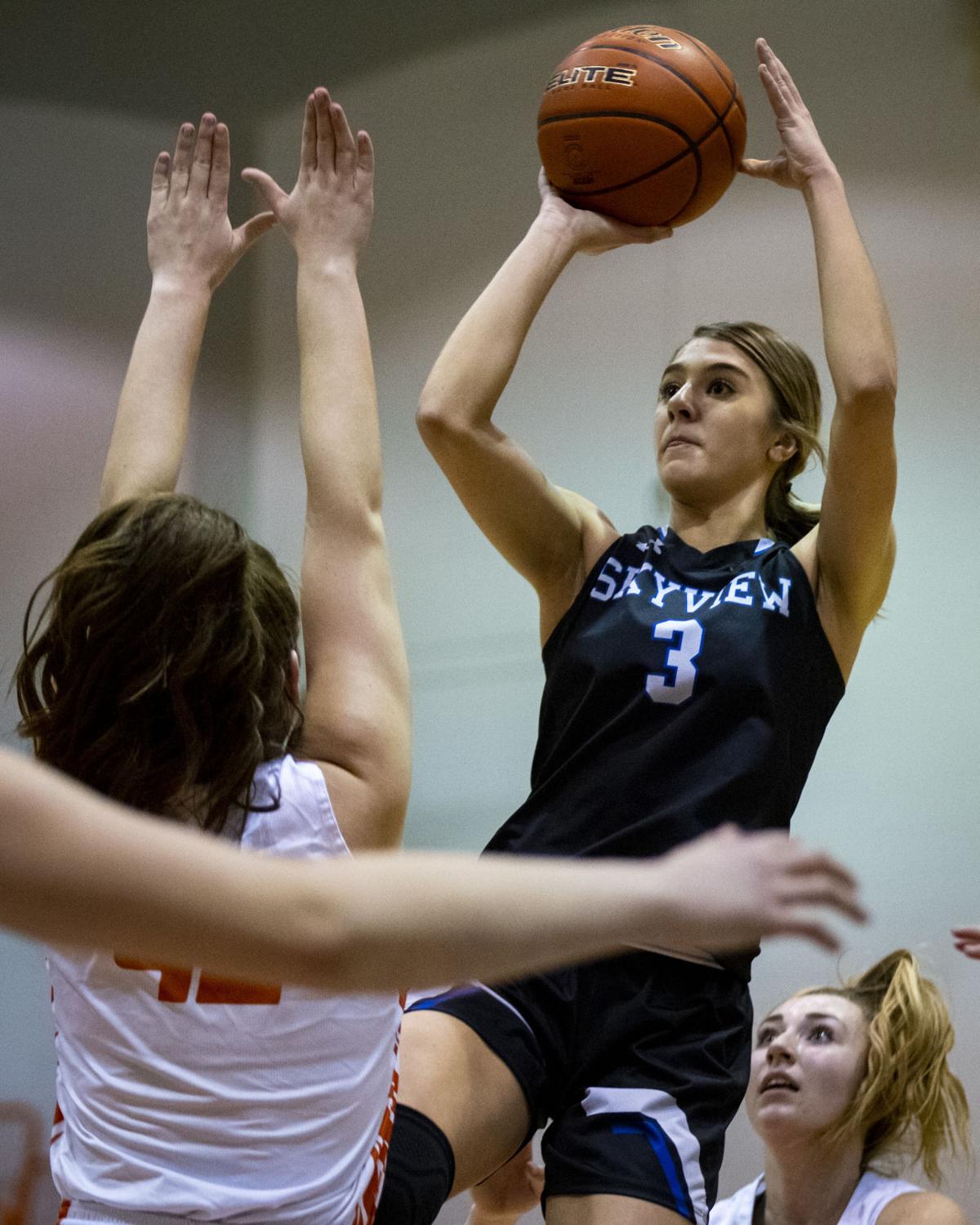 Brooke Berry (3) has tamed her game quite a bit over the years at Billings Skyview. "She's been able to be around some really talented players, her teammates, and that's obviously helped her out. And she's helped them out," says her coach, Brent Montague. 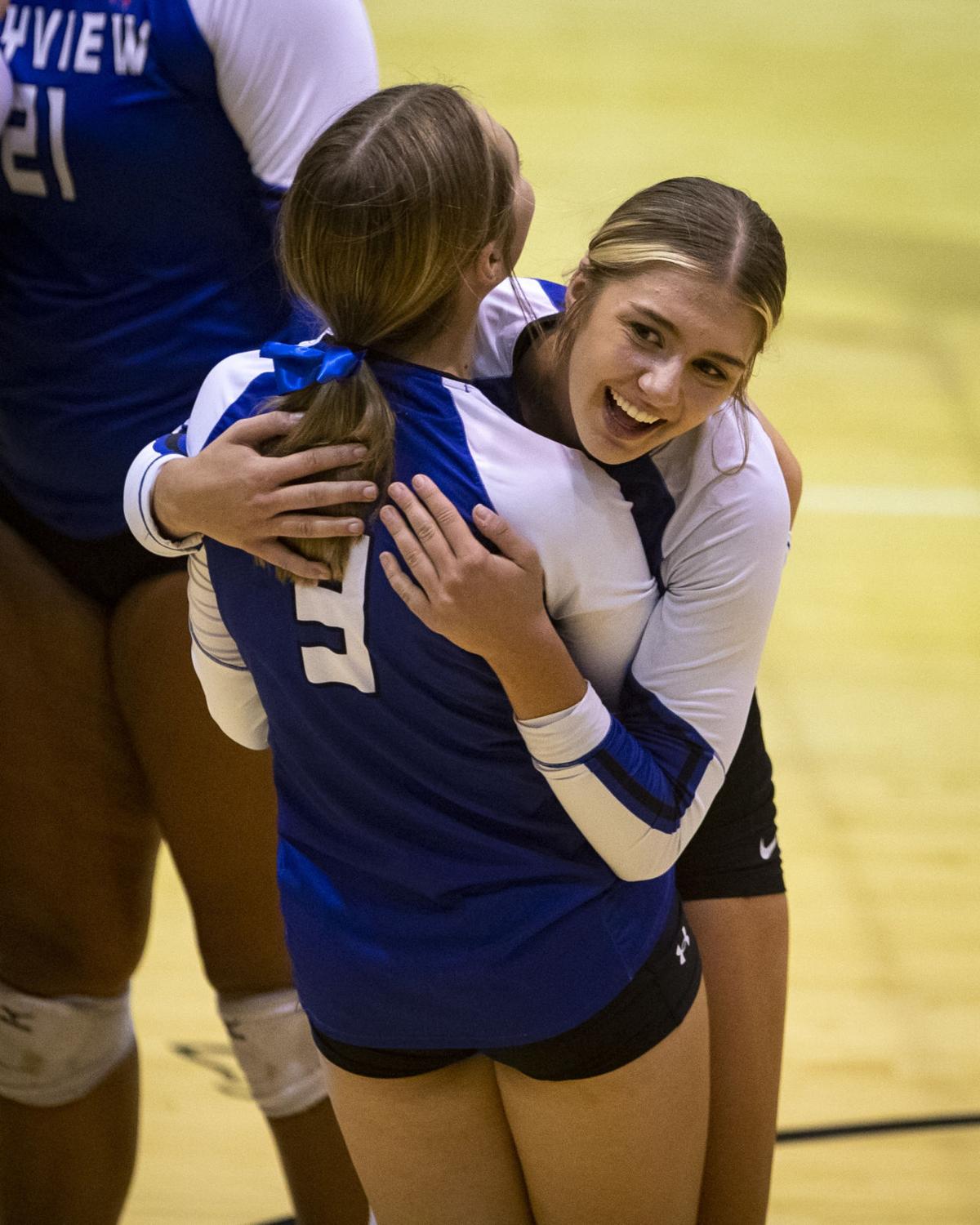 Billings Skyview's Brooke Berry hugs teammate Jenna Salveson (9) after a point during a match against Billings Senior in September.

Brooke Berry is a four-year starter for the Billings Skyview girls basketball team. She's closing in on 1,000 points for her career.

Brooke Berry (3) has tamed her game quite a bit over the years at Billings Skyview. "She's been able to be around some really talented players, her teammates, and that's obviously helped her out. And she's helped them out," says her coach, Brent Montague.

Billings Skyview's Brooke Berry hugs teammate Jenna Salveson (9) after a point during a match against Billings Senior in September.

Take her freshman season at Billings Skyview. Her pre-game basketball ritual sometimes featured a trip to the concession stand for a hot dog. Before almost every game, Berry downed a two-ounce bottle of 5-Hour Energy Shot and chased it with handfuls of Nerds candy.

The result was an energetic Berry, all right. She would chase the basketball wherever it went, trying to make every play, no matter how inconsequential the upside might have been. Of course, the dividends of such a regimen where short-lived. Usually by the middle of the first quarter, certainly by the end, Berry would be bent over at the waist, hands stretching her shorts to her knees, torso heaving up and down as she tried to catch her breath.

“Once the first quarter was over,” Berry says with a laugh now, “I was just completely sugar-crashed. Oh, my gosh, I can’t believe I did that.”

Wasted energy, really. Berry was a hard-worker, to be sure. But efficiency was lacking, and the stats showed that.

She averaged 11.7 points per game as a freshman (2018-19), but took an incredible 303 shots to get them. Berry shot just 29% from the floor, which included a 22-of-117 performance from the 3-point line. Those 117 3-pointers, by the way, were more than the total field goals taken by her next-closest teammate (Kinsey Frost attempted 110 shots), another indication of where Berry's decision-making needed improving.

Like those sugar crashes, Berry’s confidence took a dive. Basketball had always come easy for her, but this was something different.

In the early part of the 2010s, The Billings Gazette sponsored a Youth Sports page where parents and/or coaches could submit photos of their various sports teams. Buried in the newspaper's photo archive are many team photos chronicling various tournament championships from as early as third grade featuring Berry and her friends, several of whom are opponents now, like Maria Stewart of Billings Central and West’s Ryan Dolan and Bella Murphy. Current teammate Cami Harris appears in a few of them, as well.

So her arrival on the high school scene was supposed to help Skyview turn the tide and help stop a long state-tournament drought that had existed since 2001. Maybe there was a part of her that believed the hype, too, not realizing teams rarely get to state tournaments on the back of one player. Instead, the Falcons won one game Berry’s freshman season.

“I was a 13-year-old freshman and there was a lot of pressure and I felt like I wasn’t really helping as much as people thought I would,” Berry said.

After briefly considering the possibility of transferring, things started to look up. Brent Montague, a longtime family friend of the Berrys, was hired to coach the Falcons. Montague’s daughters Shayla and Allie had played with Berry before, and Montague, who had known Berry all her life, knew how to get the most out of his new player.

First to go was the energy drink-and-candy routine. Next, Montague taught Berry and her teammates how to prepare for games, encouraged them to visualize success. Then, it was to get Berry to realize the value of possessing an overall game and not to shoulder too much responsibility.

"But in order for us to get where we want to go, you've got to also get other people involved and that is something that she's just gotten so much better with and it's made her a much better all-around basketball player."

This year Berry has 39 points in her team’s three games. That puts her at 973 for her career and on course to top the 1,000-mark sometime shortly after the season resumes on Tuesday.

Better yet, Berry said, is that the Falcons are winning. Since a 1-19 season her freshman year, the Falcons followed with 10-14 and 13-6 seasons and are 2-1 so far in 2021-22. Berry’s sophomore season saw Skyview beat Billings Senior in overtime in a state-qualifying game to end that long tournament drought, and the Falcons returned to state last season and finished fourth.

Hopes are high this season for an even better ending. With Harris, MG Spotted Bear and Breanna Williams all being legitimate scoring options, Berry no longer has to force things for herself. In fact, besides leading AA in scoring last season, she was second in assists (4.21 per game), thanks to her teammates. Berry’s defense has steadily improved as well (a fifth-best 2.63 per game) and she’s always been a solid rebounding guard (better than 4.0 per game for her career).

Few players exude as much excitement or joy on the court than Berry. She can be found laughing during a game (sometimes at herself) or hugging teammates, particularly during her three seasons of volleyball where celebrations are more common. If there’s another sporting event going on at Skyview and if she has the time, Berry is often in the front row, cheering on her schoolmates.

There is nothing, Montague said, that Berry “thinks is too cool for her.”

“I think outsiders are sometimes surprised at how humble she is,” he said. “Brooke’s got a big heart and she totally gets involved in all types of things at school. She’s a fun kid to be around, and she goes all in on supporting the other sports.

“The thing about Brooke is, she’s a really, really good kid and what you see on the court with her energy pretty much mirrors who she is off the court. She’s got incredible energy, an incredible sense of humor and she’s a lot of fun for people to be around.”

It’s been a long journey to 1,000 points, an outcome Berry never expected or planned. Her teammates, she said, have made her better, and besides, all she's ever wanted to do is win games. Her path will eventually lead to the University of New Mexico of the Mountain West Conference, where she’s expected to report in June to begin her career with the Lobos.

“I’m always joking around, smiling, but then I also know when to dial in,” Berry said. “That’s one thing Mr. Mon (Montague) has really helped me with, maturing. My freshman year, I didn’t know how to mentally prepare for a game, but Mr. Mon has taught me to do that.

“That is the reason I’ve had so much success at Skyview is just because of the security that I received from Mr. Mon being my coach.”

Those days of energy shots and candy? They're long gone.

For Billings Skyview's Brooke Berry, all it took was one Pit stop to land at New Mexico

Berry was the top scorer in Class AA last season.