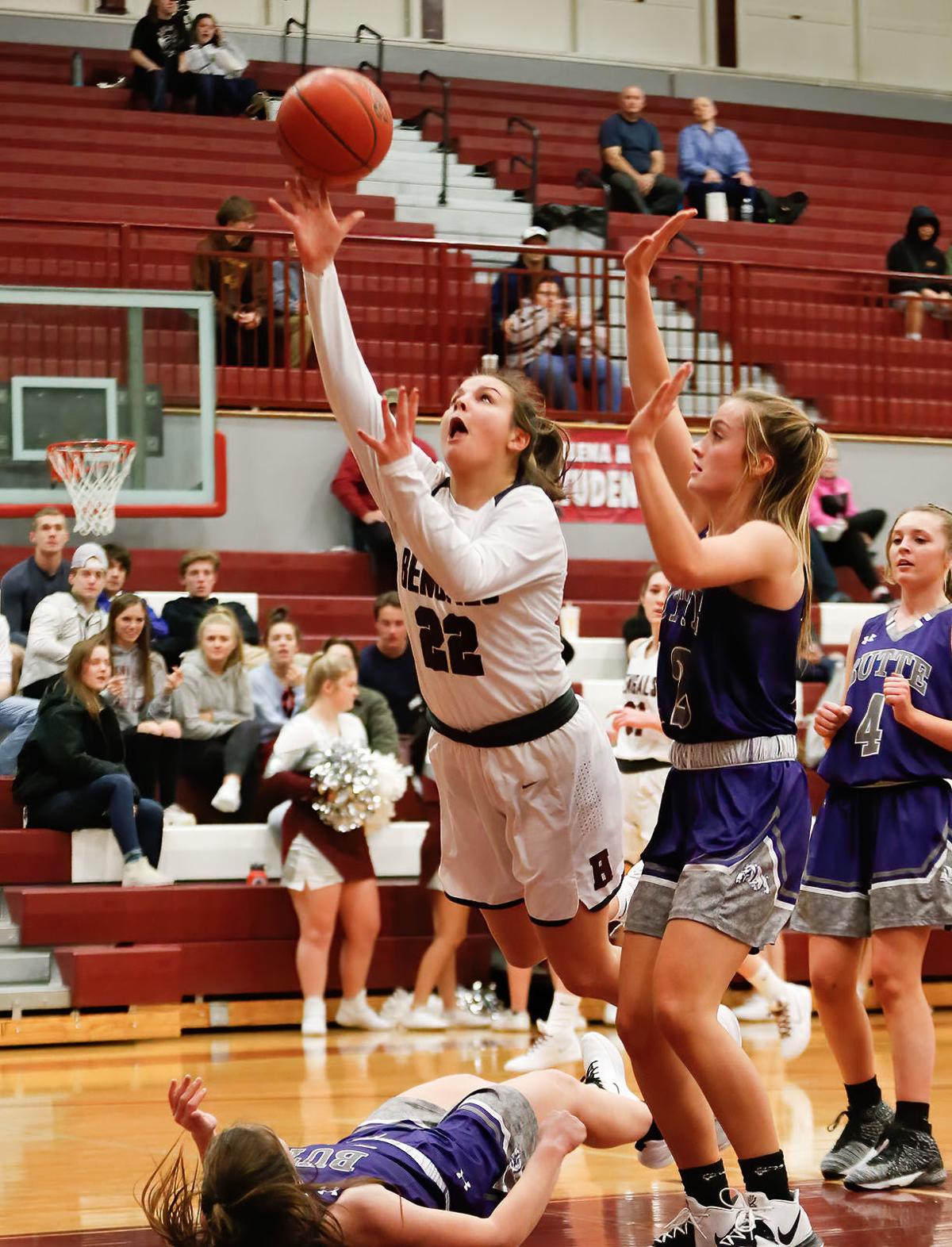 Helena High’s Riley Thennis is fouled by Butte during a layup attempt at Saturday’s game in the Jungle. 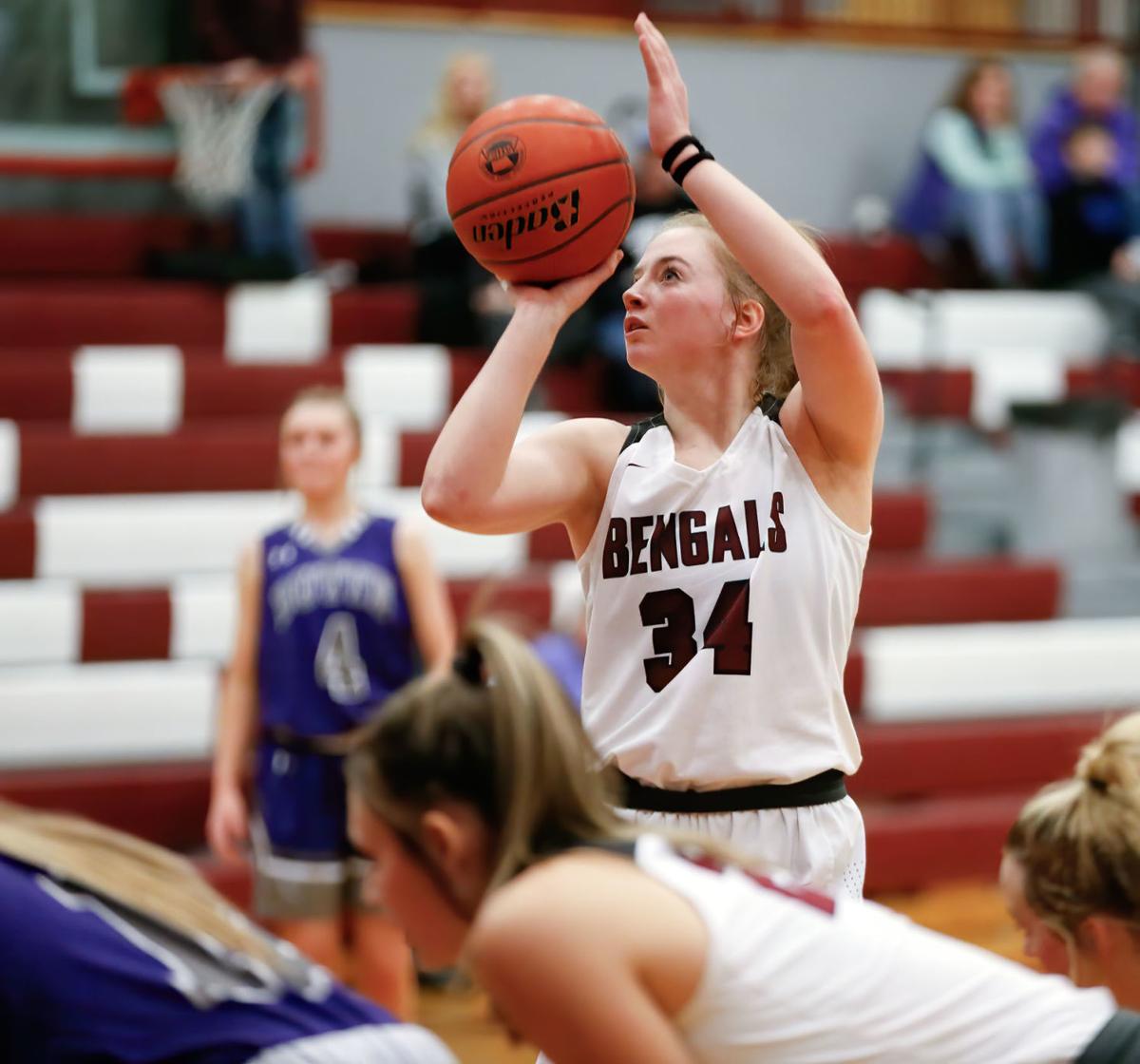 Helena High’s Caroline Bullock shoots two free throws after being fouled by Butte during Saturday’s game in the Jungle. The Bengals edged out the Bulldogs 43-40.

Helena High’s Riley Thennis is fouled by Butte during a layup attempt at Saturday’s game in the Jungle.

Helena High’s Caroline Bullock shoots two free throws after being fouled by Butte during Saturday’s game in the Jungle. The Bengals edged out the Bulldogs 43-40.

HELENA — Every time it seemed like the Bengals put the Bulldogs away, Butte dug deep and fought its way back into the game. But in what was a defensive struggle for most of the afternoon, it was only fitting that the Helena High defense locked in during the final possession to seal a 43-40 victory Saturday in the Jungle.

"We have some scrappy kids," said Butte coach Maury Cook. "They play defense lights out. They're small and I think our kids fly around real well, but the problem has sometimes been the consistency of that defense."

Trailing 43-37 with just under a minute to play, the Bulldogs furiously passed the ball around the perimeter hoping to drag a Bengals defender out of position. Helena suffocated Butte and the Bulldogs did not manage to get a shot off until there were just five seconds left to play, which eliminated any hope for an extra possession.

"That's always our number one. Something we always want to come out with is good defense," said Helena coach Eric Peterson.

With about four minutes remaining, Kylie Lantz knocked down 1-of-2 free throws and Helena was up 34-31. After an empty possession from Butte, Lantz came back down and drained a 3-pointer from the left wing. It was pandemonium with the Bengals leading 37-31.

"I just felt like my teammates will have my back no matter what," said Lantz. "And even if I do miss they'll always cheer me on and pick me up."

Lantz was one of three players to lead the Bengals in scoring with eight points.

"She came in and sparked our team for sure," Peterson said. "She got a couple steals off the press and finished, and it's just one of those things where we expect anybody who's coming in the game to be prepared and she was prepared. She made a great couple plays that gave us some separation there."

Butte kept fighting. A Trisha Ericson 3-pointer made it a one-possession game at 40-37, as the Bengals would need clutch defense and free-throw shooting down the stretch to put the game on ice.

The game started out as a rock fight. Abby Marcille grabbed the opening tip and nearly turned around and put it in the wrong hoop. She gathered herself and eventually opened the scoring by cleaning up an offensive rebound. Emily Feller laid in another deuce after also grabbing an offensive rebound. The Bengals led 4-2 after one quarter.

The offensive struggles continued for both teams in the second quarter. The Bengals were simply trying to survive the Bulldogs' press. Butte's offense became more fluid and passes started to look crisp, however the shots were not falling. This was a common theme as the Bulldogs shot just 25 percent compared the Helena which shot 40 percent.

"When you miss 26 shots in a half — and we missed 26 shots in the first half — you're not going to win many games that way," Cook said.

As halftime approached it was becoming clear that every basket was critical. The crowd sensed it as well as they erupted whenever a shot did go in. Butte's MacKenzie Tutty drained a jumper from the left baseline to put the Bulldogs ahead 10-9. Just before the end of the half, Helena's Elizabeth Heuiser drove in for two to give the Bengals an 11-10 lead at the half.

After the intermission, both offenses picked up a little steam. After a Caroline Bullock free throw and an empty Butte possession, Marcille secured an offensive rebound and scored on a reverse layup to extend the lead to 14-10. Butte's Haley Herron drained a pair of free throws only to see McKayla Kloker come right back and nail a 3-pointer. A Marcille free throw followed by a Tutty transition layup made it 18-14.

Tutty finished the game with 22 points to lead all scorers.

From there Helena went on a 9-0 run fueled by a barrage of steals by the Bengals press that set up easy layups. The way the game had gone to this point made the lead seem insurmountable.

The Bulldogs had other ideas.

The Bulldogs started the fourth quarter on a 6-0 run. The teams traded a couple more baskets before a Herron jumper from the elbow made it 33-31. However, on the next possession Herron fouled out of the game with over half the quarter to play. The Bengals were also in the bonus for the remainder of the game and would hit just enough free throws down the stretch to seal the deal.

Helena High's Eric Peterson is an accomplished head coach and this summer, he could be adding a national award to his resume.