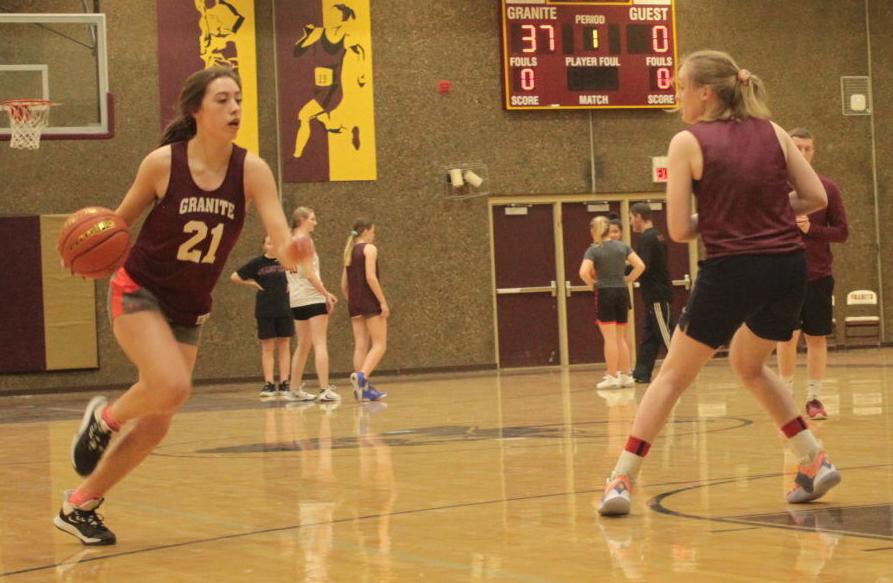 Philipsburg's Reece Pitcher drives to the hoop during practice last week at Philipsburg High School. Last year, the Prospectors took second place in the district tournament and posted a 15-8 record. 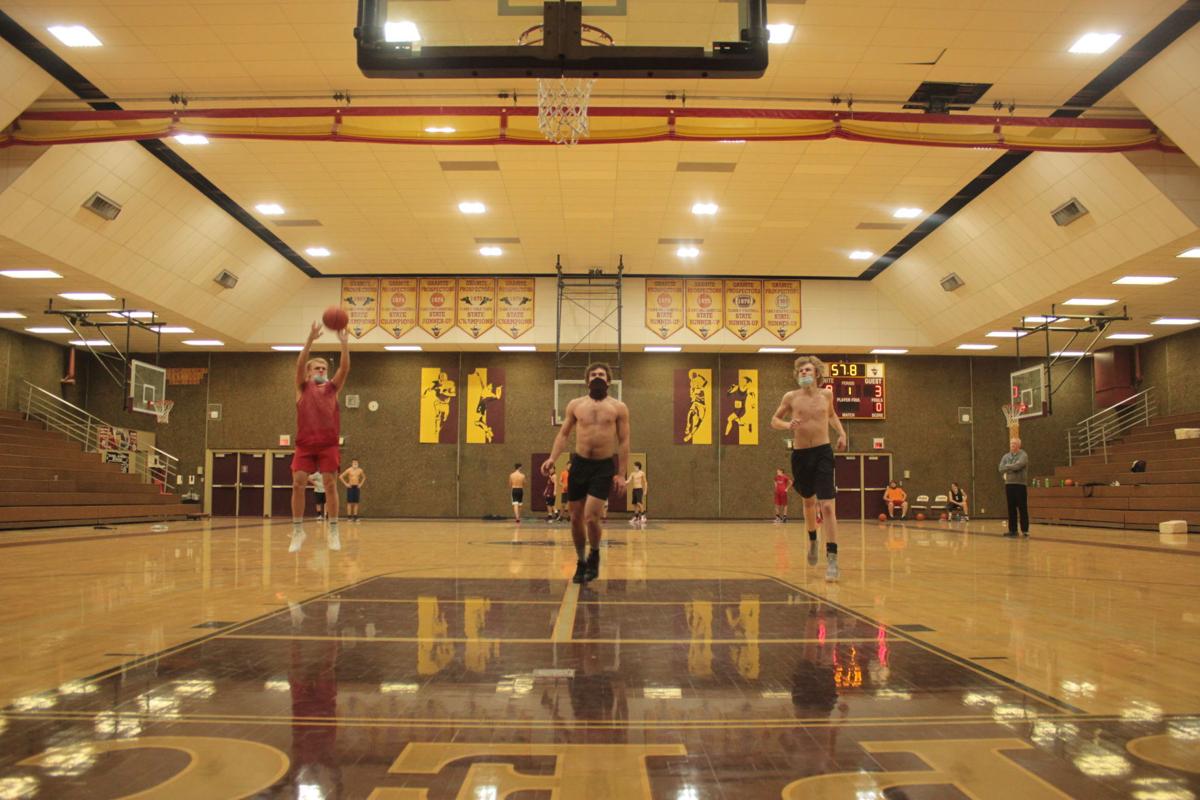 Philipsburg's Preston Metesh (left) takes a jumper from the elbow while Kade Cutler (middle) and Kai O'Donnell wait for the rebound last week at Philipsburg High School. Last year, the Prospectors lost a divisional tournament semifinal game on a 3-pointer at the buzzer and finished the season with a 15-6 record.

Philipsburg's Reece Pitcher drives to the hoop during practice last week at Philipsburg High School. Last year, the Prospectors took second place in the district tournament and posted a 15-8 record.

Philipsburg's Preston Metesh (left) takes a jumper from the elbow while Kade Cutler (middle) and Kai O'Donnell wait for the rebound last week at Philipsburg High School. Last year, the Prospectors lost a divisional tournament semifinal game on a 3-pointer at the buzzer and finished the season with a 15-6 record.

PHILIPSBURG — Last season, both of Prospectors’ basketball teams saw their postseason runs end a little sooner than they would have liked. There’s no shame in taking second-place in the district tournament and posting a 15-8 overall record, which was the case for the girls. There’s certainly no shame in losing a district tournament semifinal game on a 3-pointer at the buzzer, which was the case for the boys who finished the year 15-6.

But there is a little feeling of unfinished business.

“There’s a little bit of a sour taste,” said senior Kade Cutler of that semifinal loss to Harrison. “We felt like we outplayed them and deserved that game, but at the end of the day we could have won it if we shot better.”

The Prospectors did not let that bad taste marinate for too long. After a state title on the gridiron that many of the basketball players were a part of, Philipsburg will once again be a forced to be reckoned with on the hardwood.

“This is on paper – it's always on paper – is the most talent that we've had on the roster,” said boys coach Dustin Keltner. “What's unique about this group is we have a lot of eighth graders who played as eighth graders. And they're now seniors. And so they're essentially fifth year seniors. And they're your quality athletes, and even better kids.”

Coach Brandon Piazzola’s girls squad also brings back a bulk of last season’s talent. Replacing last year’s graduating seniors Audrey Radtke, Shelby Struna and Serenity O’Donnell will be a challenge, but Piazzola has returners who have proven to be more than capable of elevating their games.

“We bring back three starters: Amelia Hill, Reece Pitcher and Asha Comings,” he said. “Amelia was an all-state player. Ash and Reece were all-conference. Rachel Ward was a freshman last year that got tons of time. She’s a sophomore this year who’s going to be a really good player for us.”

A common advantage for both rosters is that the core groups of returners have been in the program since the eighth grade. Obviously the familiarity and continuity is important, but so is being able to empathize with the current group of younger players, and then show them what it takes to succeed at this level.

“This group, they’re pretty tight-knit, our older girls are great to the younger girls,” Piazzola said. “They’ve really helped them get acclimated to the high school level. And conditioning-wise, these girls in the offseason were in the weight room all the time. They’re in the gym all the time. That hasn’t changed since school started, so they’ve come into this season in good shape.”

Imagine being 14 years old and in the eighth grade. You’ve probably been playing basketball with the same group of kids since you first joined an organized team. Then you’re brought up to a new team who you don’t really know, and the players are mostly 3-4 years older. While exciting, it must be at least a little intimidating.

“They’ve been good. It’s definitely been a change for them and I can see it,” said Pitcher, a junior who played with the Prospectors as an eighth-grader. “I remember doing it as well, so you know how it feels. But, they’ve been doing well. It’s fun to have them at practice getting them into the drills and stuff.”

There is also a pair of transfer students playing for the boys. Keltner explained that both athletes became acclimated with their team mates during the fall sports season.

“This is a very open group of kids. Trevor Morrisey, he came in and played football,” said the eighth-year coach. “And so, he was an all-state athlete on the state championship football team. And Mayson Palen he came in. He's actually a soccer player who came in a little bit late, but he's eligible to play for us this year. And he's just such a good kid. He's got a great character. He fits in perfectly with the kids and they've welcomed both those kids with open arms.”

During the nearly three-week pause in activities after the conclusion of fall sports, the Prospectors’ upperclassmen would hold open gyms.

“It shows us, as coaches, how committed they are and how serious they are,” Piazzola said. “They’re just fun to work with. They’re a great group. They’re easy to coach; every one of them is coachable.”

The main purpose of the open gym was certainly to get shots up, but as Hill explained, the players also just wanted to simply be in the gym working up a sweat.

“It kind of happened organically,” said the senior, who has been on the girls varsity team since the eighth grade. “We like to be in the gym and we like basketball. We like sports and we like to work hard. We were all kind of here for it. We all wanted to work for it.”

With the coronavirus pandemic looming in the back of their minds, the Prospectors are taking everything in stride.

“It makes us nervous because, of course, you don’t want your season to stop,” said Hill, a senior who has also been with the program since the eighth grade. “It almost happened for us during volleyball season. So right now it’s the world we live in. We kind of have to make the best of it. It is what it is and whatever happens, happens. You’ve just got to hope for the best.”

Both Philipsburg teams take pride in their work ethic, and knowing that the season could end at a moment’s notice only fuels that fire.

“Whethever you’re practicing or playing in a game, you’ve got to play your heart out each time,” added Comings, another junior who began her career with the Prospectors during the eighth grade.

But mostly, they just want to be out on the court with their teammates and friends.

“I’m really excited. Most of the girls are, too. We’re just ready to get out and play,” Pitcher said.

This is the third of 12 articles previewing the winter sports seasons for high schools in the Montana Standard's coverage area.

A ‘grassroots’ rebuild: Sheridan boys and girls basketball turning the corner, hope to take next step in 2020-21

The Panthers will have their work cut out as they face powerhouses such as Manhattan Christian and Twin Bridges. But with the shift in culture, perhaps it won’t be long until these games, previously thought of as “character builders,” turn into competitive or even winnable matchups.