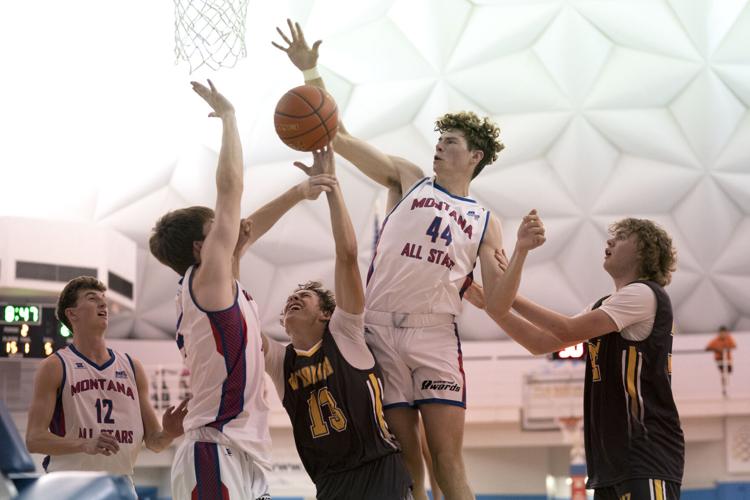 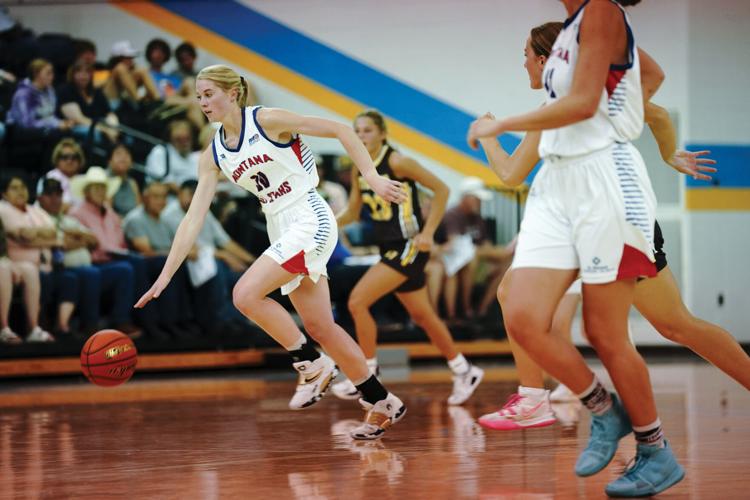 Montana's Kaitlin Grossman drives down court after a turnover during the Montana-Wyoming All-Star Series at the Bruce Hoffman Golden Dome on Friday in Sheridan, Wyo.

SHERIDAN, Wyo. — At halftime, coach Steve Keller walked into the Montana boys all-stars’ locker room and wrote one word on the whiteboard: Wow.

Nothing else needed to be said.

Yes, winning is fun, and one side has been doing a whole lot of it lately in the annual Midland Roundtable Montana-Wyoming All-Star Basketball Series. That didn’t change Friday, as both the boys and girls teams from Montana extended long winning streaks inside a hot and muggy Bruce Hoffman Golden Dome on the campus of Sheridan College.

Montana’s boys put on a run-and-gun show en route to a 103-76 victory, winning for the 19th straight time and extending their lead in the series to 64-27.

The Treasure State girls, meanwhile, found themselves trailing in the third quarter but righted the ship in time to prevail 69-59 to win their 12th straight and increase their series advantage to 36-13.

The series, in its 46th year, will shift to Lockwood High School in Billings on Saturday. The girls game tips off at 5:30 p.m. and the boys start at 7:30. The games will be preceded by the first Midland Roundtable All-Star Volleyball Classic at 3.

‘This is why we coach’

Montana’s boys clearly had no intention of relinquishing their series dominance. It was a performance that even had Keller on the edge of his seat.

“We locked down defensively and that's what got us going. We got some stops and started running the floor,” said Keller, head coach at the University of Providence in Great Falls. “This team all night long was looking mostly to pass first and shoot second. I felt like they played together. They played defense together. They were helping each other. It was amazing.

Gatorade player of the year Brayden Koch of Helena Capital got it started in the second quarter with a layup on a runout off a turnover, Gros Ventre scored on a drive, Missoula Big Sky’s Caden Bateman converted underneath and Gros Ventre scored again on consecutive possessions as part of a 10-1 run.

It didn’t stop there. Bateman dunked inside, Froid-Lake’s Javonne Nesbit finished a nice spin move and then hit Reynolds with a perfectly executed alley-oop and the run had reached 33-10 by halftime.

Wyoming’s hope for its first win in the series since 2011 evaporated quickly.

“Transition really killed us,” said Casper Kelly Walsh’s Davis Crilly, who led his team with 22 points. “They are a great and really fast team and they were able to just get out and go. We definitely didn't play to our full potential on the defensive end. We weren't helping. We weren't really talking as well as we did a couple practices before. And we missed a lot of shots and had a lot of empty possessions.”

“When you’re shooting layups and dunks instead of 3-pointers it’s a lot easier,” said the 6-foot-9 Reynolds. “Our length bothered them on both ends. We forced a lot of turnovers and got a bunch of offensive boards, and that was a big part of the game.”

Wyoming’s girls had the look of a team on the verge of winning the state’s first game in the series since 2016. Mya Hansen and Bailee Sayler, in particular, made sure that didn’t happen.

Billings Central’s Hansen scored a game-high 19 points and Sayler of Missoula Hellgate had nine of her 10 points in the second half as Montana averted danger.

“We got some stops,” said Rocky Mountain College’s Wes Keller, head coach of the Montana team. “We were putting them at the foul line it seemed like every other possession. And so we quit fouling, got some flow and then our kids hit some shots.

“You start making shots and it’s contagious. So proud of our effort.”

Melstone's Draya Wacker added 10 points and Havre's Sadie Filius finished with nine for Montana, which trailed by eight points on two occasions in the third quarter.

Wyoming, which shot 15 of 23 from the foul line overall, went on an 8-0 run to open the third quarter and take a 43-35 lead, capped by a put-back shot by Casper Kelly Walsh's Logann Alvar. After Cheyenne East's Kiera Walsh posted up and scored with 3:23 on the clock, Wyoming maintained its advantage, 47-39.

But Sayler, who didn't make a field goal in the first half, started Montana's comeback with a 3-pointer and a two-point jumper on consecutive possessions, then hit a wild, driving shot with 1.1 seconds left in the third to put her team up 50-49. Montana never trailed again.

“I mean, that’s one where you just kind of hope and pray,” a smiling Sayler said of her circus shot. “It’s good to have skill, but it’s good to have a little bit of luck. It worked out.”

Montana also trailed in the first half but tied the game at halftime thanks to consecutive 3s by Wacker, including a 28-foot buzzer beater at the end of the second quarter.

“For (Saturday), I honestly don't really foresee us making many adjustments,” said Northwest College’s Lauren Davis, head coach of the Wyoming girls. “I would like to see us work inside-out a little bit more and not get so dribble happy. But I was pleased with the way the girls played, so I feel good.”