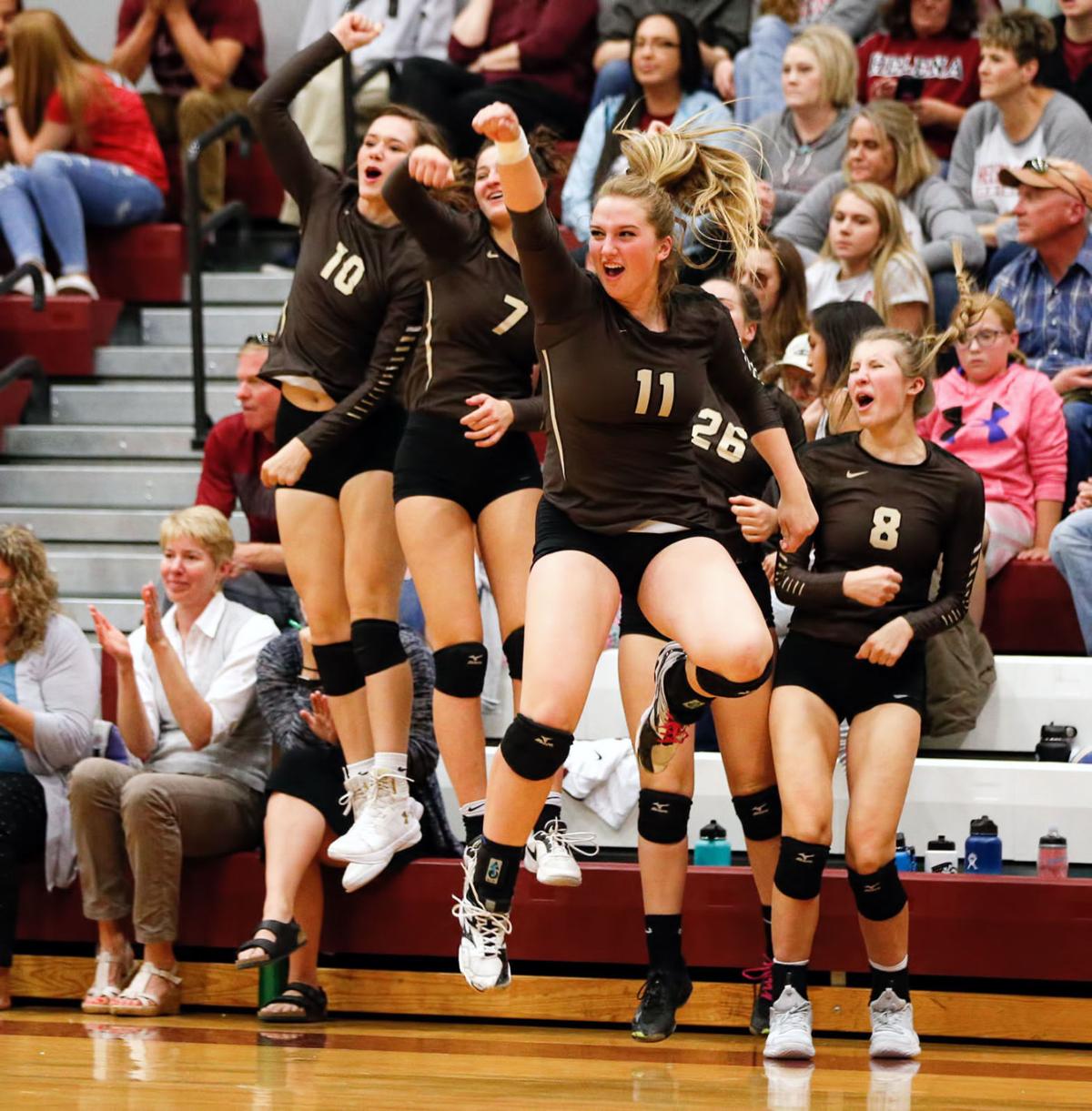 Helena Capital sweeps crosstown rival Helena High 3-0 to win the Western Conference title in a recent game in the Jungle. 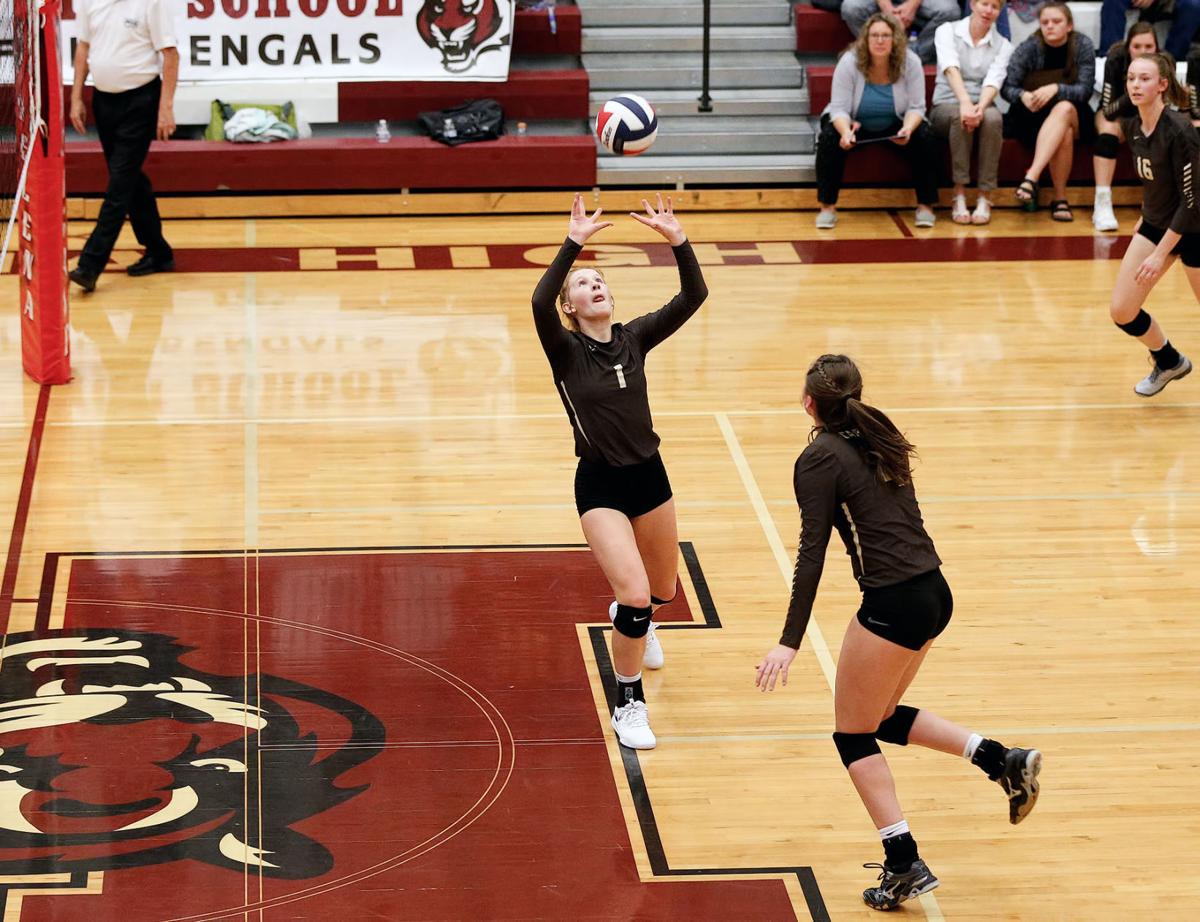 Helena Capital’s Audrey Hofer sets for a spike by Emily Kidder during this season's crosstown match against Helena High in the Jungle. The Bruins swept the Bengals 3-0.

Helena Capital sweeps crosstown rival Helena High 3-0 to win the Western Conference title in a recent game in the Jungle.

Helena Capital’s Audrey Hofer sets for a spike by Emily Kidder during this season's crosstown match against Helena High in the Jungle. The Bruins swept the Bengals 3-0.

It was Capital's first volleyball conference title since 2002.

The Bruins improve to 24-2 and 11-1 in conference play, while HHS slips to 21-6, 10-2. Since the Bengals captured the first meeting last month, Capital has reeled off a 10-match winning streak.

As 1-2 in the conference, both schools have earned byes to the state tournament in Bozeman next month.

"Improved defense, better serve-receive, and we covered their hitters," said Capital coach Rebecca Cleveland, when asked the main difference from then and now. "And we're better at protecting the first serve, although we still lose too many, which makes the games closer."

All three sets were close at the end of each, although the final was perhaps the most dramatic.

In the opener, Helena took an early 3-1 lead before Capital went ahead 5-4 and led the rest of the way. The Bruins biggest cushion was five points at 16-11.

Helena closed the gap to three as late as 23-20 before the Capital's Paige Bartsch tapped a soft kill for the game-winner.

In the next set, the score was tied four times and the lead changed hands three times until the visitors pulled in front for good at 18-17. Capital's Audrey Hofer's ace got to set point, and moments later again it was a Bartsch hit for the winner.

In what turned out to be the finale, one of the best points of the day came on back-to-back digs by the Bruins — Kerstie Pierce's diving save near the back line with her back to the net, and a Pancake by Dani Bartsch — prior to a spike by teammate Sarah Ashley at 2-1.

In a switch from the norm, shortly after that, 6-foot-4 Paige Bartsch assisted 5-7 setter Audrey Hofer's kill.

It appeared Capital was going to run away with it when Dani Bartsch served nine successive points for a 16-6 lead. But then two Bengals serving streaks by Elizabeth Heuiser (six points) and Vanessa Walsh (seven points), closed the gaps to 19-13 and 22-20, respectively.

Helena's Jamie Pickens and Emily Feller led the attack at the net with Feller firing an ace to get within one at 23-22. But then came a hitting error before Dani Bartsch spiked the match-winning kill.

Helena was paced Pickens at eight kills and three blocks, and Feller had 16 assists. Walsh posted 11 digs, and Heuiser had three aces.

"I'm proud of how the girls kept their composure and stayed together, they're maturing as a team," Cleveland said.

Bengals coach Lindsey Day said they knew "Capital has a great team" and that her squad would have to play their best match in order to win.

"Capital made us scramble, and we didn't do the little things right," Day said. "We were hurt by too many unforced errors."