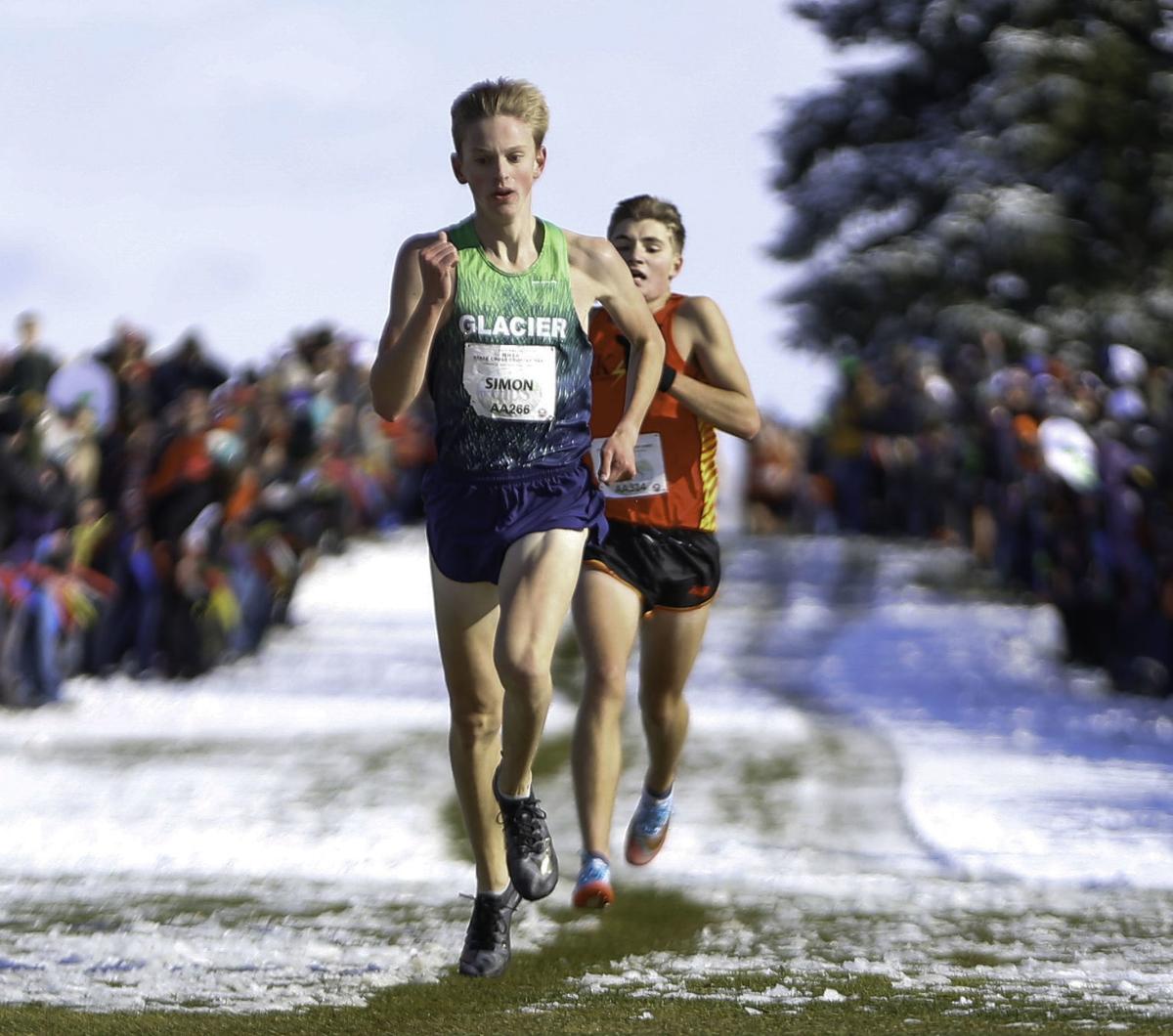 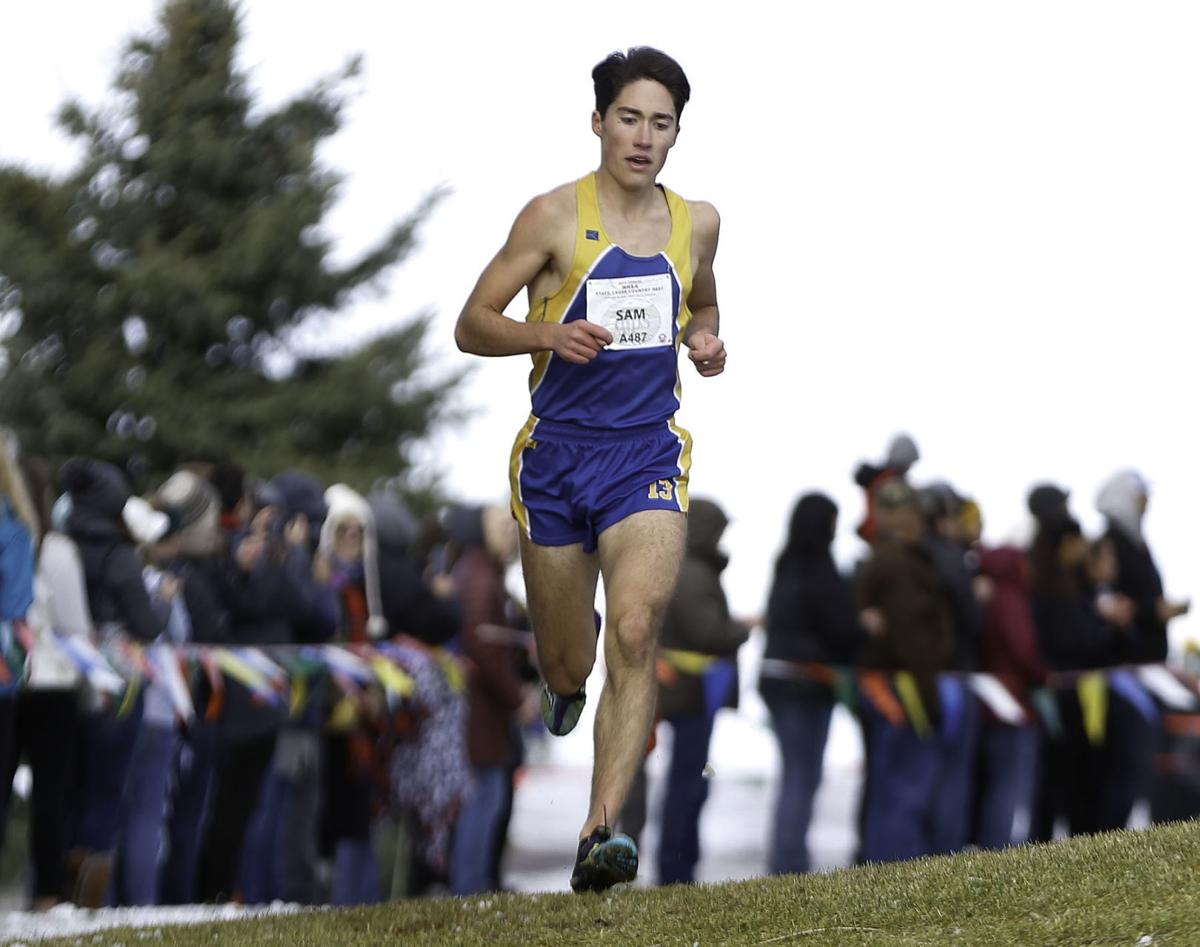 Fergus’s Sam Fulbright wins the Boys State Class A race with a time of 16:10.43 Saturday in Great Falls. 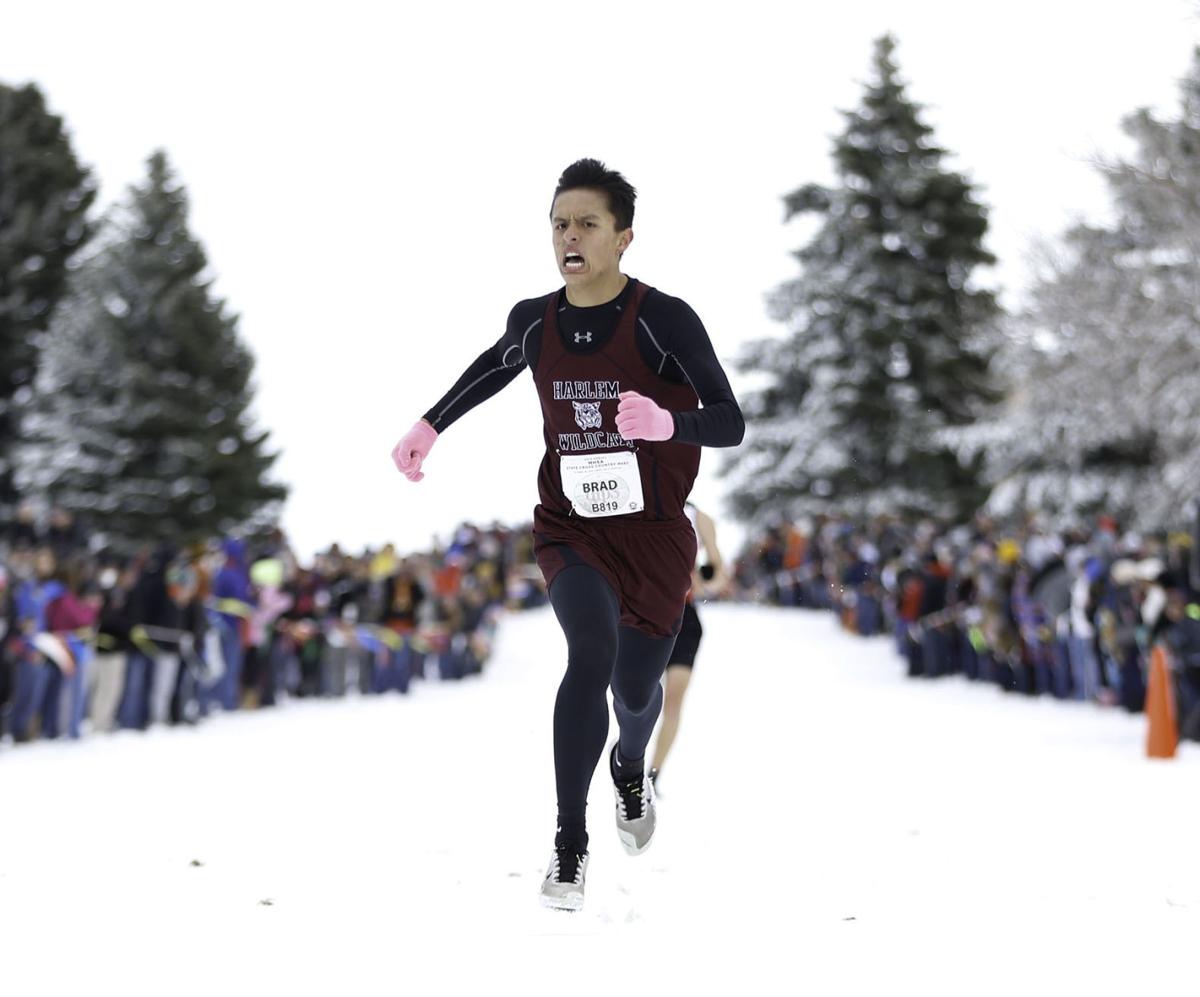 Harlem’s Brad Cichosz wins the boys State Class B race with a time of 17:08.70 Saturday in Great Falls. 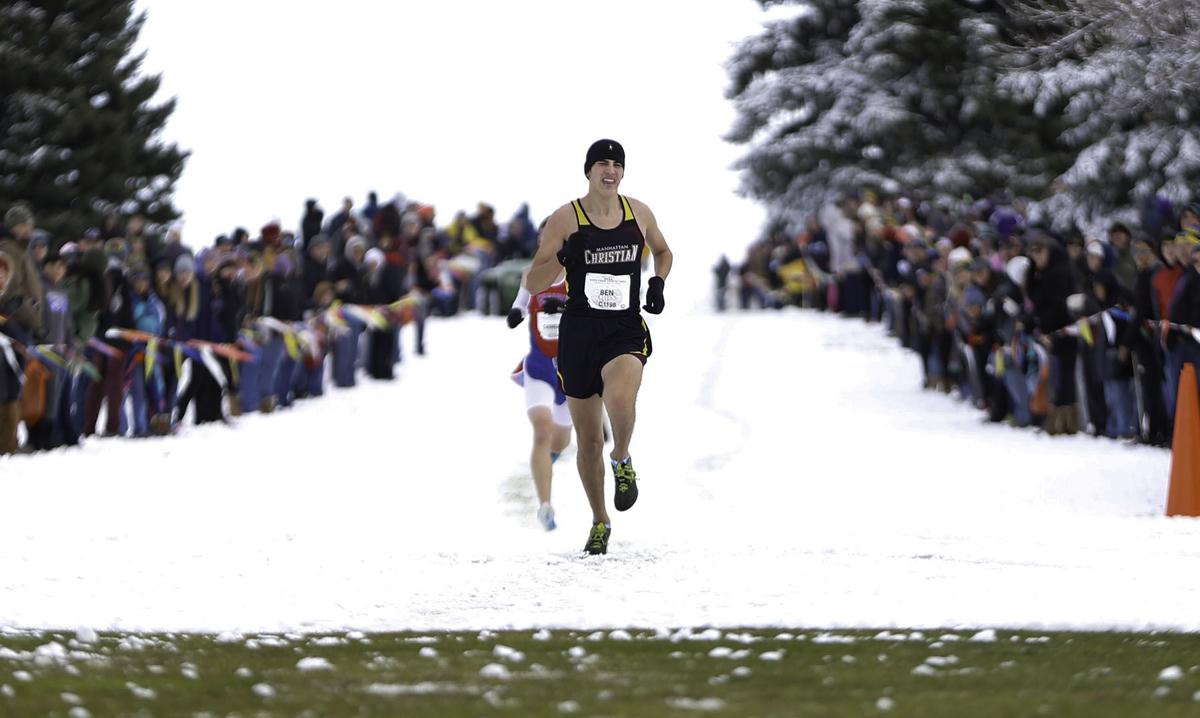 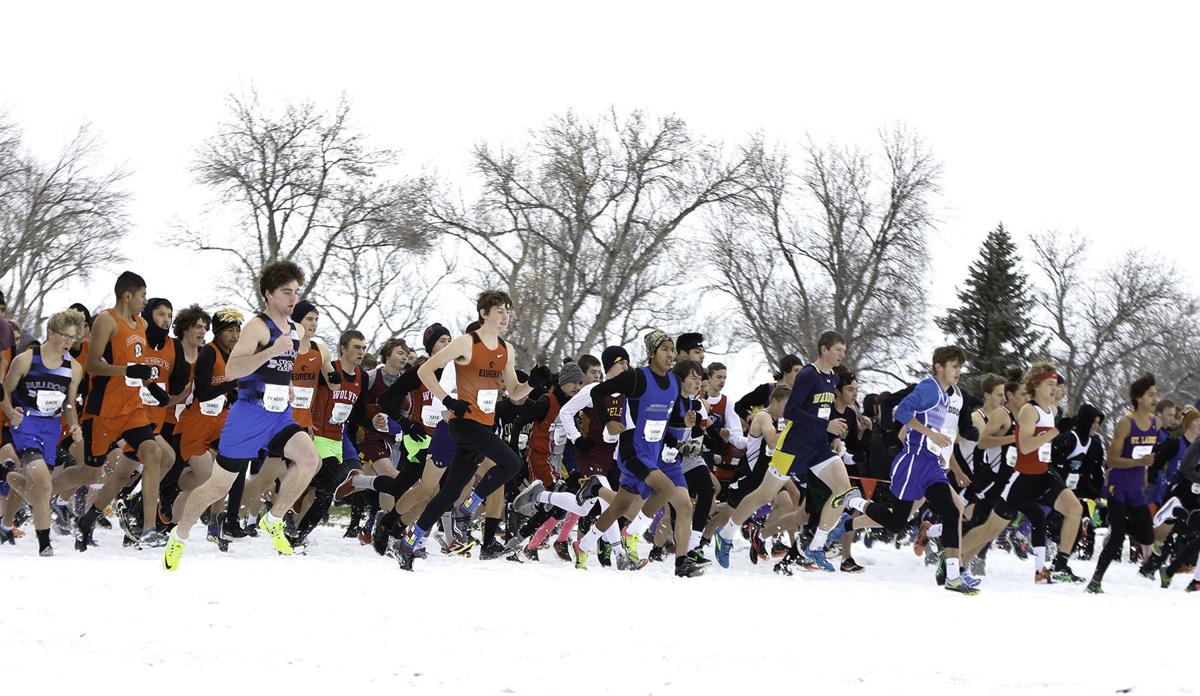 GREAT FALLS -- When they totaled the AA boys points on Saturday at the Eagle Falls Golf Course, there were two teams tied atop the standings - the 11-time defending champion Bozeman Hawks and the Hellgate Knights, the last team to beat the Hawks.

"It was super exciting because 1-6 has been so close all season and just to see that we all counted when it mattered the most was really cool," Wheeler said."

"It was a straight up tie through five (runners) which was awesome. Hellgate put together an awesome race. Those guys ran really well and our guys battled and ran really well as well and it just kind of shook out that way. So we're fortunate that the win bounced our way and it's been a fun season with those guys," Bozeman coach Casey Jermyn said.

“We think on any given day if we put all the pieces together, we think we can give them a run,” Hellgate coach Anders Booker told 406mtsports.com earlier this week. “They’re feeling the same way. I feel good about where we’re at and I think we’re gonna give it a shot.”

The Knights certainly did.

The Hawks earned perhaps the closest win in their streak in the final year before Bozeman will add Gallatin High School and the current freshman and sophomore classes will split between the Hawks and Raptors.

"It was kind of nice to have both wins being the last year under Bozeman High," Jermyn said.

The Knights were led by three all-state placers in Ian Curtis, Ignatius Fitzgerald and Lukas Horejsi.

The Hawks placed five in the top 15 with William Hodgson, Griffin May, Stirling Marshall-Pryde, Xander Danenhauer and Seth Wyatt with Wheeler in sixteenth and the team tie-breaker.

Wheeler said, "As we toed the line it was like, 'This is the last one, run harder than I've ever run in my life.'"

"We ended up being fortunate and the streak lives," Jermyn said.

As the individual medals were presented, Hill and Curtis embraced on the stands.

"We separated at about mile two. I pulled away, Ian right next to me, just side by side and that's kind of how we've been all season. I'm just so thankful I have somebody to do that with," Hill said.

Hill was the 2018 runner-up and said that motivated him during his workouts including his summer runs with his sister Annie, a two-time state champion and current runner for the University of Colorado.

"I told her my race plan and it kind of worked and kind of didn't. I planned to surge just after a mile and I did and I pulled away from Ian for about five seconds, but he caught back up and (she had) told me not to do that," Hill said. "I thought, 'Maybe she was right, but that doesn't mean my race is over.' That's just a time to reset and go get it again.

"It just goes to show that if you put in the time, you really do get the fruits of your labor and it's the most satisfying feeling you could ever have."

Fergus’s Sam Fulbright wins the Boys State Class A race with a time of 16:10.43 Saturday in Great Falls.

Lewistown senior Sam Fulbright had chased Laurel's Levi Taylor all season in 2018 and finished runner-up to the Class A record holder at state.

In 2019 he had to adjust to being the front runner. He delivered with a winning performance of 16:10.43 to lower Taylor's previous record.

"It's a little bit different because you have to know there's a big target on your back whereas last year I was the one folloiwng the target. Racing this year I've had to grow a lot mentally," Fulbright said.

"I have him to thank for setting the bar for me."

"It was just so cool working this whole year. I was getting really scared coming into state," Fulbright said. "There are a lot of good runners here with me so I knew they'd all be right with me. So all that worry just disappeared when I was coming down that homestretch. I was so happy."

Fulbright's performance helped lift the Golden Eagles to a third-place finish with 98 points behind Hardin (86) and Columbia Falls (65).

It was the second consecutive title for the Wildcats.

The Wildcats were racing for junior Aidan Jarvis who will move to New Mexico with his family in a week.

But first they were most excited for the fire truck ride and celebration awaiting them back in Columbia Falls.

Harlem’s Brad Cichosz wins the boys State Class B race with a time of 17:08.70 Saturday in Great Falls.

Harlem senior Brad Cichosz made a splash at his first state cross country meet when he won the state title in 17:08.70. After playing football his freshman and sophomore years but dealing with injury, he started running cross country for his junior year. However, he had another injury a week before last season's state meet.

This year, he and Glasgow's Wilson Overby have raced each other over and over all season and had come in with the top times.

"It was good to have that competition knowing that we were both one and two in the state. I knew it was going to be fun racing against him," Cichosz said. "I was so scared that he was going to pass me (down the homestretch), I just started running for dear life."

It also resulted in Eureka's first state title. The Lions were third in 2018 which brings the total boys team cross country trophies residing in Eureka to two. They were followed by Manhattan (96) and St. Labre (165).

"I figured it would come down to Manhattan and Eureka," Lions coach Andrew Gideon said. "To have a good day like this is a build up of a long time."

Unlike previous years, the Lions didn't have to deal with forest fire smoke in the early season and have had conditions that allowed them to train consistently.

"I've always kind of wanted to see what my team would run like in the snow." Gideon said.

The answer to that question is well.

Senior Alex Lowe was thrilled to get that first-place trophy. "I never thought it would be as good as it was.

"After four years of running thousands of miles with these guys, it feels amazing."

The current members of the Manhattan Christian boys cross country team have never known anything except winning a state championship as they earned their fourth-straight.

They were led by senior Ben Morrison (16:52.99) and set what was being reported as a new low score record with just eight points.

"It was just fun to see it all come together today," Eagles coach Nate TesSlaa said.

"It's crazy. It's a blessing," Morrison said.

The finish chute showed that evidence as maroon and gold jerseys occupied seven of the fifteen chairs, only three of which scored according to Class C rules.

"I love Sam Smith, he got second and it was a dogfight, but I had a ton of fun." Morrison said. "Really fun last race.

"I just really wanted it to come out to an all-out sprint at the end."