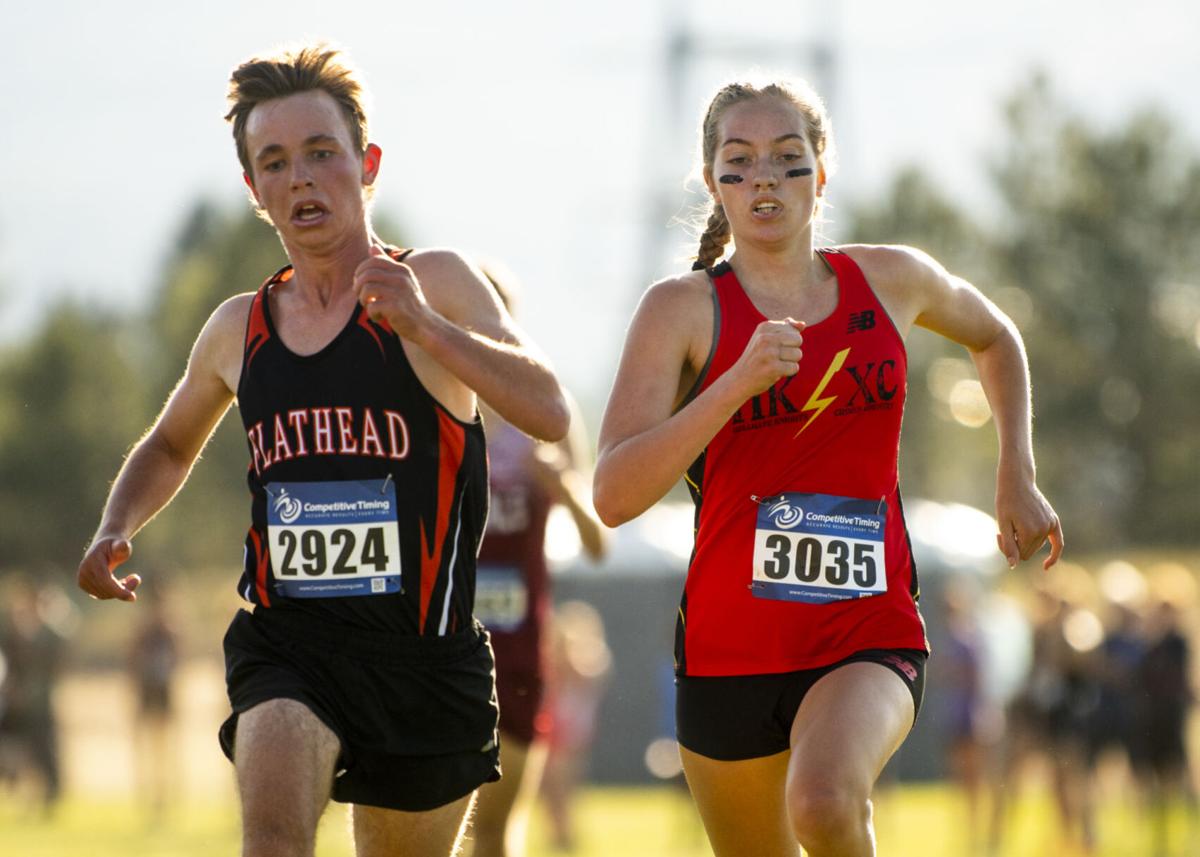 Missoula Hellgate’s Kensey May, right, sprints to the finish line along with Kalispell Flathead’s Peter Wilson during the Missoula Coaches Invite cross country meet on Thursday at the Missoula Equestrian Park. May finished with the best girls time. 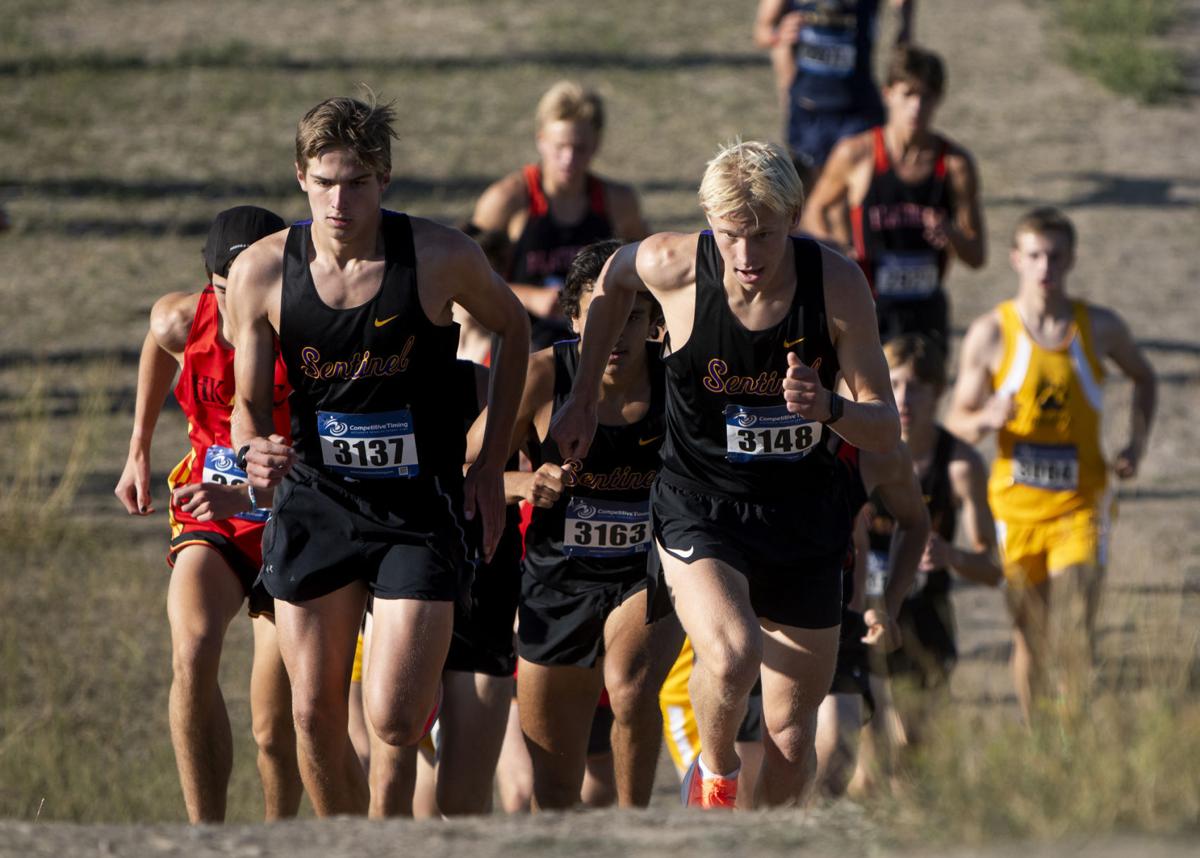 Sentinel’s Chase Green, left, and Tanner Klumph, right, run ahead of the pack during the Missoula Coaches Invite cross country meet on Thursday.

Missoula Hellgate’s Kensey May, right, sprints to the finish line along with Kalispell Flathead’s Peter Wilson during the Missoula Coaches Invite cross country meet on Thursday at the Missoula Equestrian Park. May finished with the best girls time.

Sentinel’s Chase Green, left, and Tanner Klumph, right, run ahead of the pack during the Missoula Coaches Invite cross country meet on Thursday.

MISSOULA — Heading into the high school cross country season, there were some major questions surrounding the top Class AA teams in Missoula.

Notably, how would the Missoula Hellgate girls rebuild after graduating Sage Brooks and Anna Kendrick and how will the team look after a tight finish for second as a team? Can the Missoula Sentinel boys repeat last season's glory and claim the top spot again? Will the Hellgate boys catch their crosstown rival after a close call in 2020?

Thursday's Missoula Coaches Invite at the Equestrian Park gave an early hint to some of those answers.

The top five of the boys race was dominated by both Hellgate and Sentinel, with the defending Class AA team champs taking three of the top five spots and the top individual finisher in senior Tanner Klumph. No one was really close to him either. He finished with a PR of 15:40.66, 14 seconds ahead of his teammate and second-place finisher Chase Green as Klumph was well ahead of the pack on the final stretch of the course at the Big Sky Horse Park.

"It was a fun one," Klumph said of the season-opening race. "I wanted to push the last mile and I did that and it was a good race even if it was a little hot."

Klumph, who finished second at the Class AA state meet in 2020, understands the Spartans have a new target on their backs this season as the defending champs.

"We are scared of everyone right now," he said. "We got the target after last year and hopefully we will do our best to not let others take it. ... I think we did really good (today). We got our five returning but our six and seven we thought it could be either one of 10 guys but I think we had a really good showing today and we are excited for the next races."

Sentinel's Keagen Crosby, a junior, finished fifth behind his top-two teammates in 16:40.99.

Hellgate meanwhile had runners in third and fourth between senior Colton Graham in 16:10.05 and junior Finneas Colescott — the top junior finisher as the races were staggered by class — in 16:40.99. When Colsescott finished you could hear his teammates shouting their want to show Sentinel they are gunning for the champs.

On the girls side, a familiar face took the top spot in Hellgate senior, and defending Class AA individual champ, Kensey May. May took first in 18:20.54, blazing past the rest of the field as she was 57 seconds ahead of second-place finisher Helena High senior Carly Ryan who finished 18:57.40.

While May did dominate the early season race, finishing well above two of the best distance runners in Ryan and Helena's Odessa Zentz, she said she is confident but knows there are plenty of talented runners she hasn't seen this season.

Whether that be from Bozeman, which has sophomore Natalie Nicholas and senior Hayley Burns back after strong seasons, or the strong group from Helena, is to be seen.

"(I'm) feeling good, confident," she said. " ... I love my team and I think they really have the mindset to win state. They are all really hardworking but it is going to take a lot of hard work, I'll be honest, but I think today was a good day to see what they are capable of and I think we will get there. ... Right now, when you really think about it and look at results from last year ... I think when I get into the east and racing there I think I will definitely have some freshmen I haven't seen."

Hellgate placed three runners in the top 10 between May, junior Annika Kendrick in fifth as the top junior finisher, and senior Emmaline Derry in eighth. Helena had a strong day, putting four in the top 10 between Ryan in second, Zentz in fourth, senior Annie Menden in sixth and senior Rylie Schoenfeld in seventh. Flathead sophomore Lilli Rumsey Eash in third as the top underclassmen finisher, Sentinel junior Malia Bradford in ninth and Helena Capital junior Emma Compton in 10th rounded out the top 10.

"Our top five is going to be mixed together, they are going to be alternating," May, who is taking more of a leadership role with Kendrick and Brooks gone, said of the top of Hellgate's pack. "It's going to be interesting to see how takes the top five to state."

Roundup of coverage from Week 2 of the 2021 fall high school sports season in Montana.