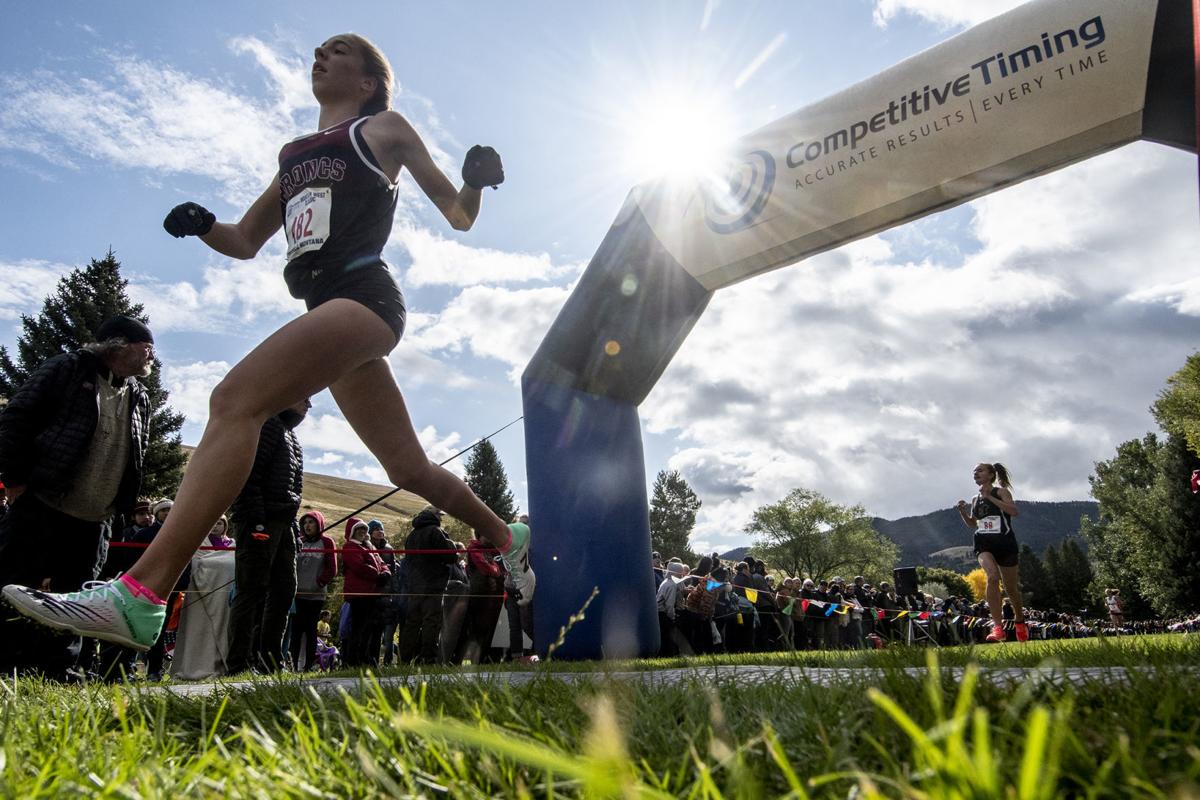 Hamilton junior Brynnli Poulsen crosses the finish line during the 2019 Mountain West Classic at the University of Montana Golf Course last month. Poulsen, who has the No. 1 time in Class A cross country this season, finished the all-class regional race in 12th with a time of 19 minutes, 19.61 seconds. 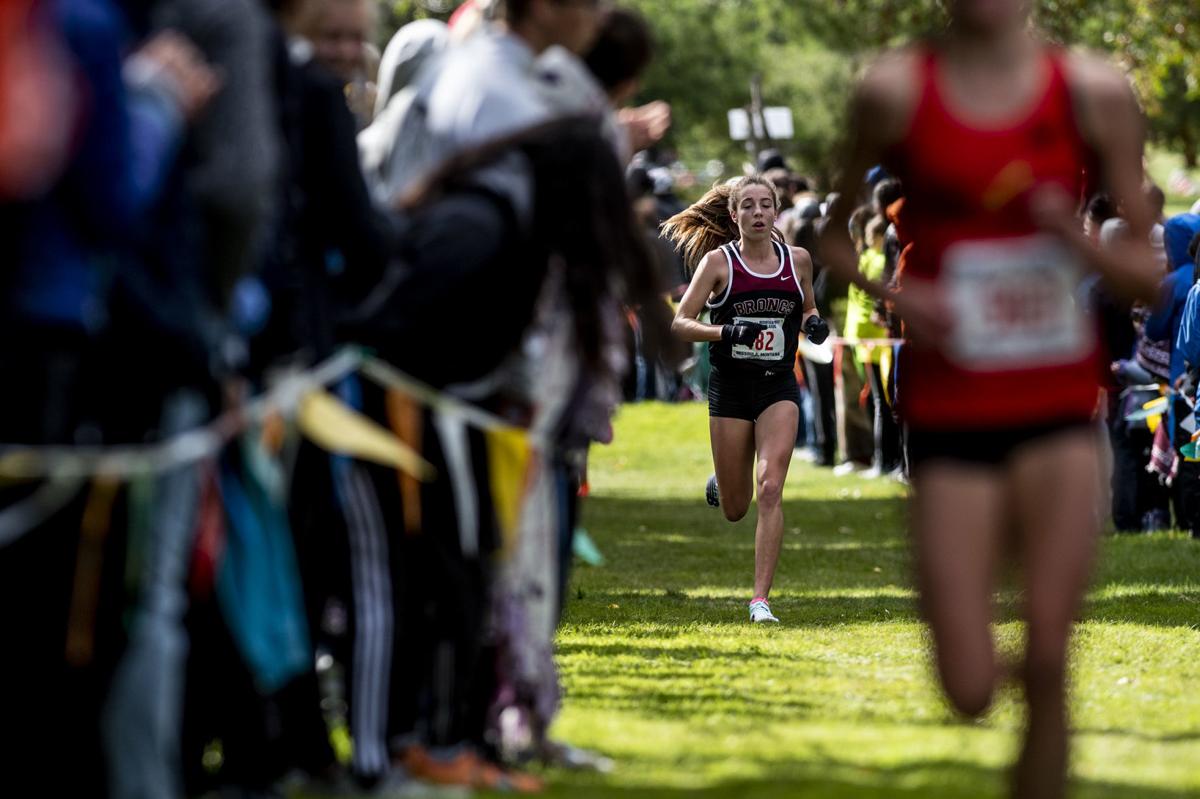 Hamilton junior Brynnli Poulsen runs during the 2019 Mountain West Classic at the University of Montana Golf Course last month. "...In a way I still am chasing her," Poulsen said of trying to track down Polson graduate and Griz cross country runner Beatrix Frissell's state-record times. "I want to beat Bea. Even though she’s graduated, I want to go and get all of her records that she set."

Hamilton junior Brynnli Poulsen crosses the finish line during the 2019 Mountain West Classic at the University of Montana Golf Course last month. Poulsen, who has the No. 1 time in Class A cross country this season, finished the all-class regional race in 12th with a time of 19 minutes, 19.61 seconds.

Hamilton junior Brynnli Poulsen runs during the 2019 Mountain West Classic at the University of Montana Golf Course last month. "...In a way I still am chasing her," Poulsen said of trying to track down Polson graduate and Griz cross country runner Beatrix Frissell's state-record times. "I want to beat Bea. Even though she’s graduated, I want to go and get all of her records that she set."

Big leads in a race, like the ones Hamilton junior Brynnli Poulsen has had this season in cross country, can sometimes keep a runner from pushing themselves to a faster time.

But Poulsen doesn't have that problem. In fact, Poulsen feels like she's still pursuing Class A's two-time reigning cross country state champion — even though that Polson High School graduate now runs for the University of Montana.

"My goal is going to be chasing all of Bea’s records, so in a way I still am chasing her," Poulsen said at the start of the fall high school cross country season. "I want to (beat) Bea. Even though she’s (graduated) I want to go and get all of her records that she set."

Bea, or Beatrix Frissell, is one part inspiration and one part friendly rival for Poulsen. Frissell was a long-distance running star for her high school on the shores of Flathead Lake. Not only did she twice win state in cross country, she was a two-time Class A state track champion in both the 1,600-meter race and the 3,200.

Finishing second in both of Frissell's record-setting races last season — and in the 1,600 at state — was Poulsen.

"(It was) very frustrating," Poulsen admitted, though she added that she has nothing but respect and adoration for the now-college runner. "We would always talk after the race and tell each other good job. During the track season we would try to run the same races together.

"...We coordinated a lot and tried to race against each other and become better. I pushed her, she pushed me; it was a good rivalry."

And even though Frissell isn't on the same course this season, she's still pushing Poulsen. It's a personal driving force that Frissell knows something about, too.

Three years ago, the girls' long-distance running landscape was dominated by Belgrade's Pipi Eitel, then a senior.

Frissell, who placed third in the 1,600 and at state cross country that year, was the runner-up to Eitel in the 3,200.

"(Eitel) was there and she was kind of like a dream," said Frissell, recalling her sophomore season. "We would kind of joke that Pipi Eitel was this goddess because of how fast she was and how tall and athletic."

Frissell, in almost parallel fashion, became that benchmark for Poulsen. It's a juxtaposition that's humbling for the college athlete, who has had tremendous success in her freshman season running for the Grizzlies.

"It really means a lot knowing that I am motivating some girls, because that’s what I needed to get to where I am," Frissell said. "The other thing with that is I’m looking at these girls, too. I don’t know if they know that, but I check Athletic.net once every two weeks or so, and I'm looking at those high school results and thinking about those girls I raced against."

One of those girls is Poulsen.

"I definitely remember looking at the results and seeing Grade 10 (last year) and thinking, 'Oh my gosh, I can’t believe Brynnli’s only a sophomore.' She reminded me of myself quite a bit," Frissell said. "She (was) so successful as a sophomore and I know as she goes through the years she can get stronger if she keeps working at it and keeps that drive."

Hamilton cross country coach Mark Albert pointed to that very determination as being what sets Brynnli apart on the course this season, too.

"She doesn’t settle, she knows she has to get better, because even if she’s running the same time as last year, there’s not going to be that gap," Albert said of Brynnli. "If she runs like Bea did, all of a sudden that gap is a lot bigger.

"...Bea set that standard and now (Brynnli) wants to break that."

It was a competitiveness that was cultivated last track season when Poulsen tried something new and became a champion.

Brynnli objected to running the 800 for a while, but she finally decided to give it a go.

"I think it was just nagging," John said, chuckling as he explained how he and the track coaches convinced Brynnli to go out for the race. "She really just felt like her races were the distance ones, and I agreed with her, but I said the 800 will make your 3,200 faster."

And as it turned out, Brynnli was really good at the 800. She won her very first race in the event midway through the track season in Corvallis.

Then she won out.

Brynnli entered the 800 five times last year and finished first every single time, including the Class A state track meet, where she clocked in with a personal record of 2:17.86. Not only did the 800 help with Brynnli's speed burst in the long-distance races, but it buoyed her confidence going into her junior year of cross country.

"...I watched the state race and she just wasn’t going to be denied," Albert said of Brynnli in the 800. "It’s given her that confidence in her speed as well. It’s really going to help her this (cross country) season."

Along with more confidence in her kick and some weight training in the offseason that she took on to prevent past injuries she's experienced, Brynnli has worked herself into the favorite for Class A ahead of the state meet on Oct. 26 in Great Falls.

It was in Great Falls this fall that Brynnli set a personal record, too.

Currently, Brynnli holds the fastest 5K time this season in her classification according to the website Frissell sited earlier, Athletic.net. Her time of 18:28.2 at the Great Falls Invite on Sept. 20 topped Laurel's Grace Timm, whose time of 19:21.8 in that race is the second-best mark in the Class A ranks.

Brynnli's time is also the sixth best across all classifications in Montana, behind five Class AA girls. Maybe more important to Brynnli, though, is the 18:28.2 mark would've topped all of Frissell's 5K times from last season — including her record run at state.

"The whole time I've went to high school I just wanted to beat Bea. I wanted to be as good as her; I wanted to be better than her," Brynnli said. "Now I (have the chance) to do that. I finally am that fast.

"It’s so exciting to know you can be up there with your idol."

And as Brynnli tries to separate herself from her icon — and the rest of the Class A field — there's no telling who the Hamilton junior herself might inspire along the way.