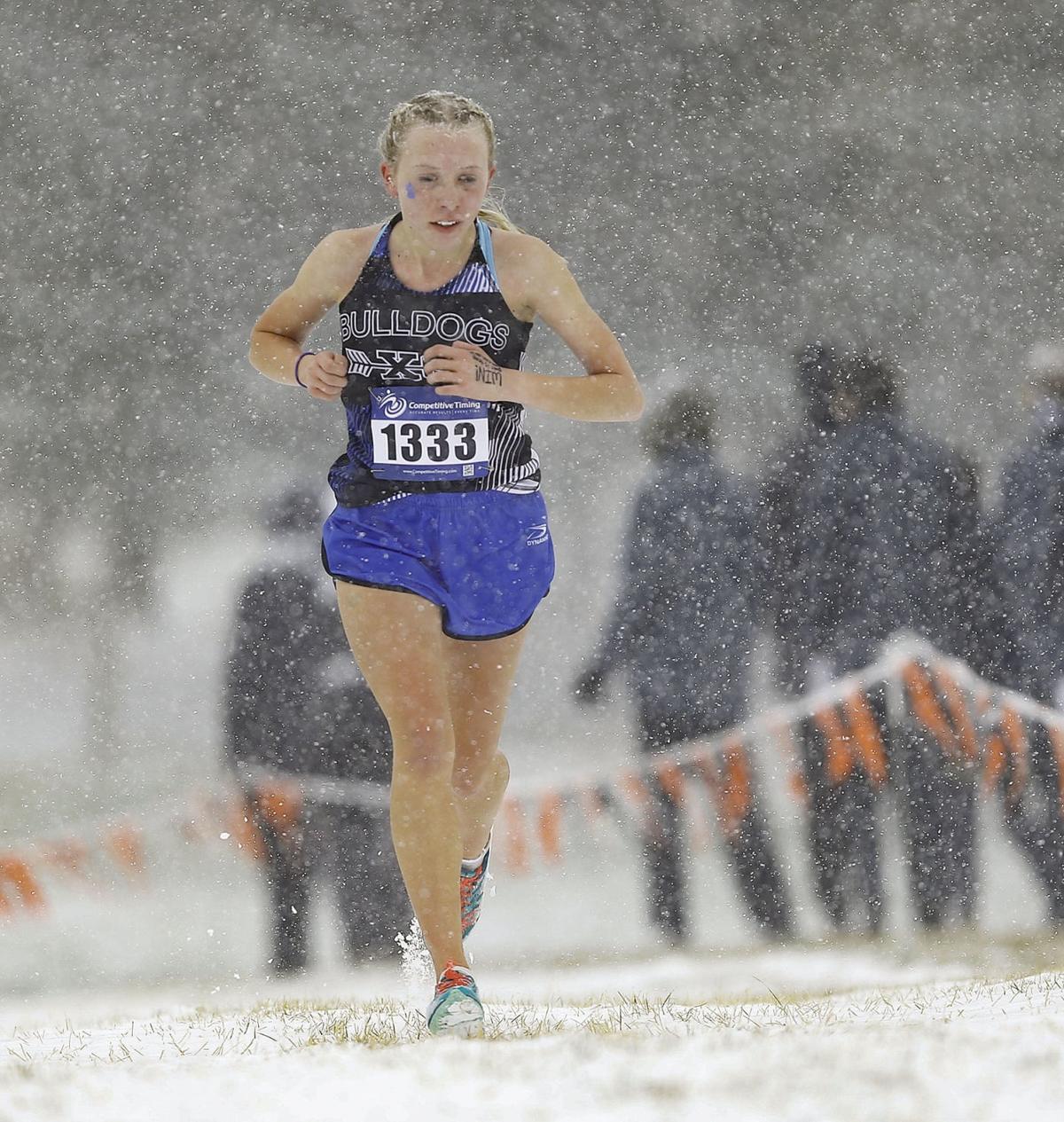 Townsend’s Emma Stolte finished third at State Girl’s B Cross Country with a time of 20:31 to lead the Bulldogs in the defense of their Class B team title Friday in Kalispell. 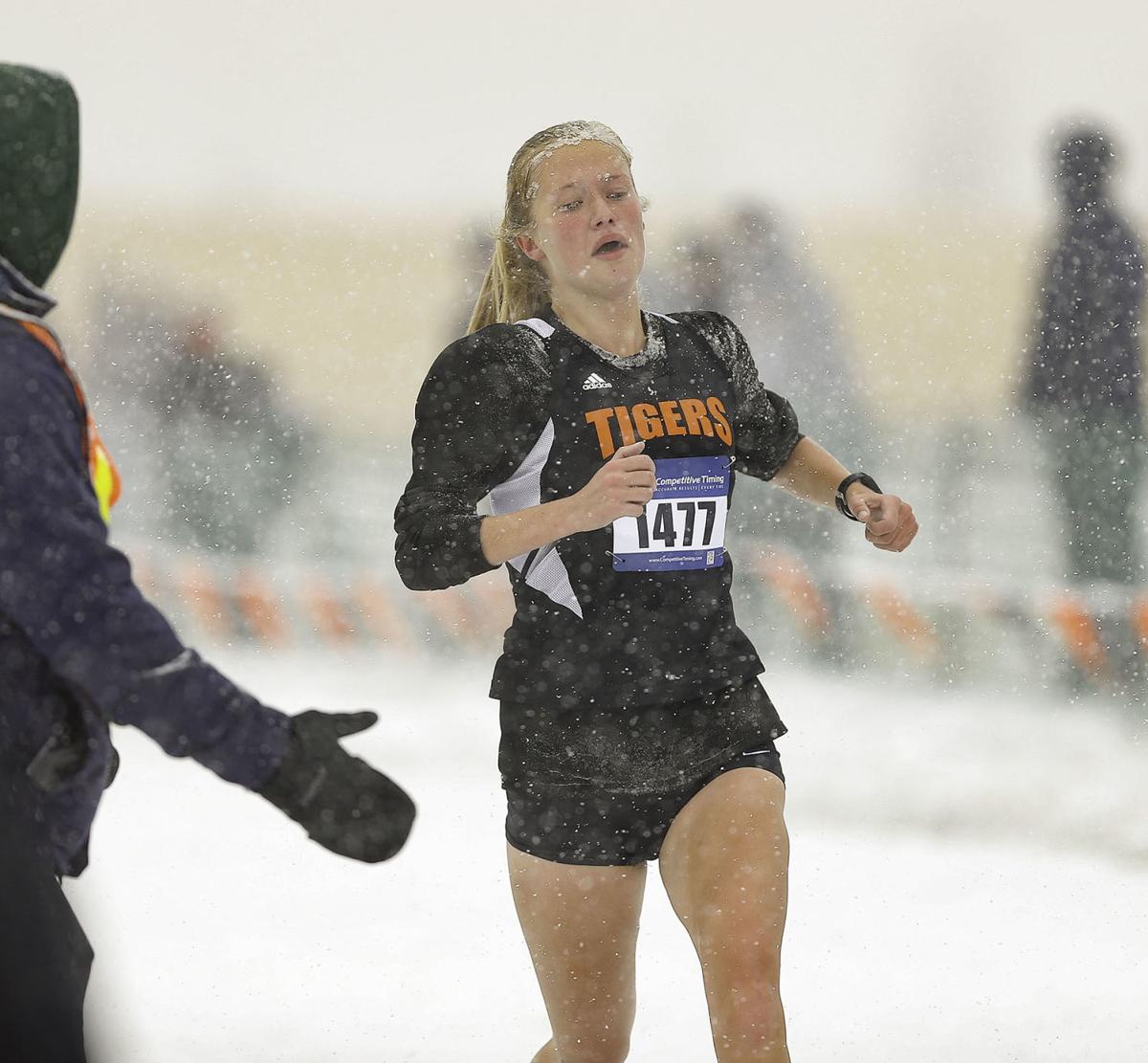 Manhattan’s Hallie Hemenway wins State Girl’s B Cross Country with a time of 20:10 Friday in Kalispell. 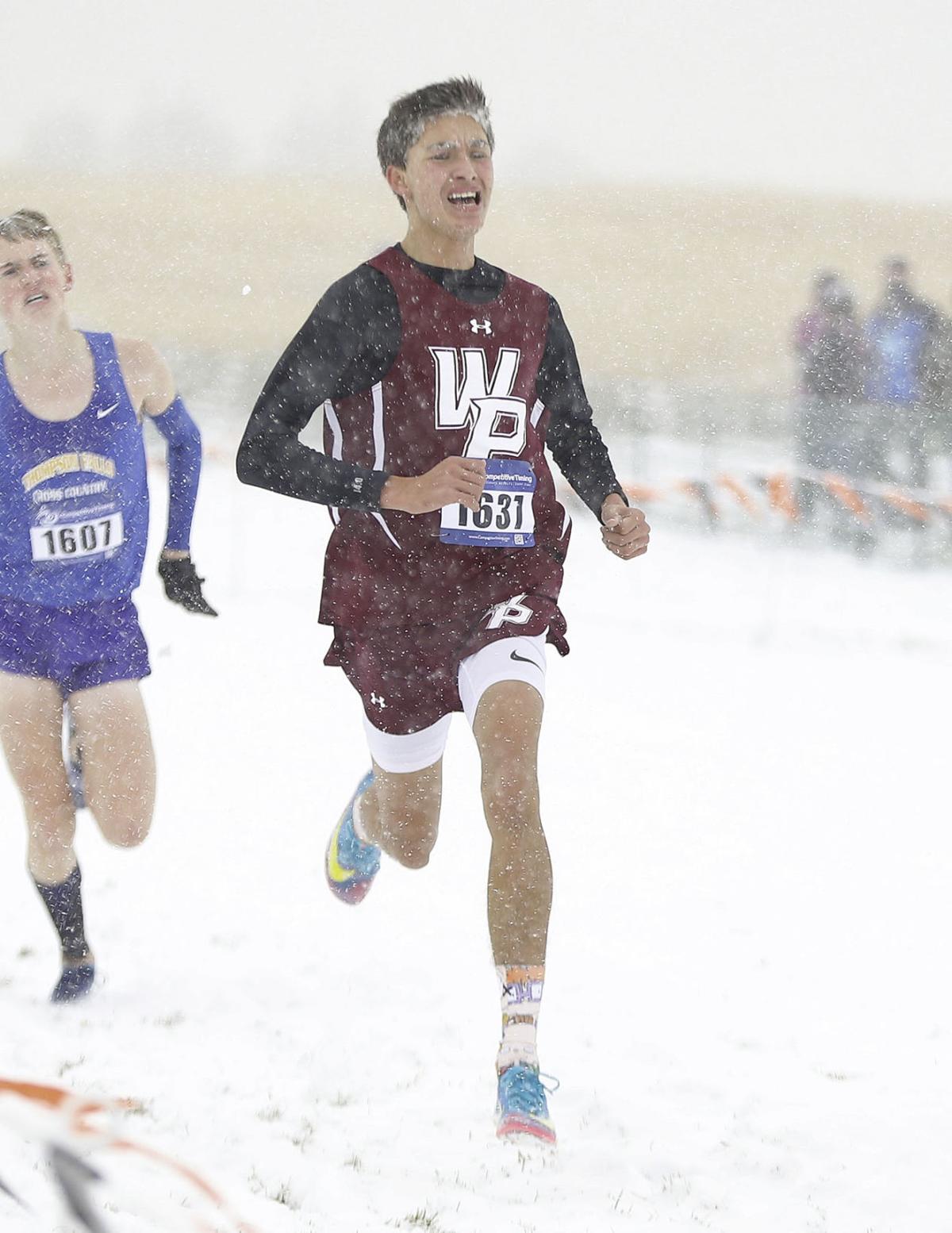 Wolf Point’s Zander Ackerman wins the State Boy’s B Cross Country meet with a time of 17:16 Friday in Kalispell. 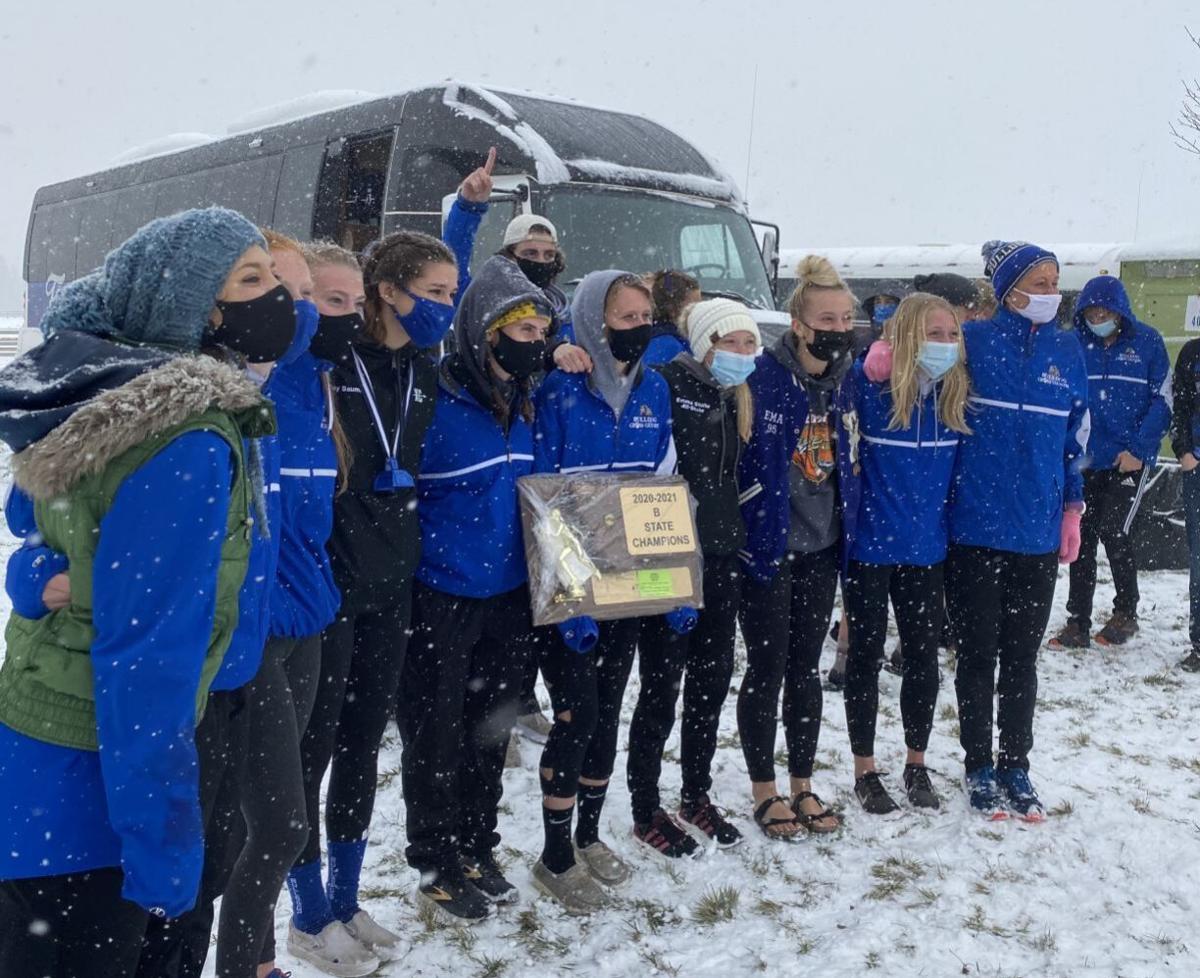 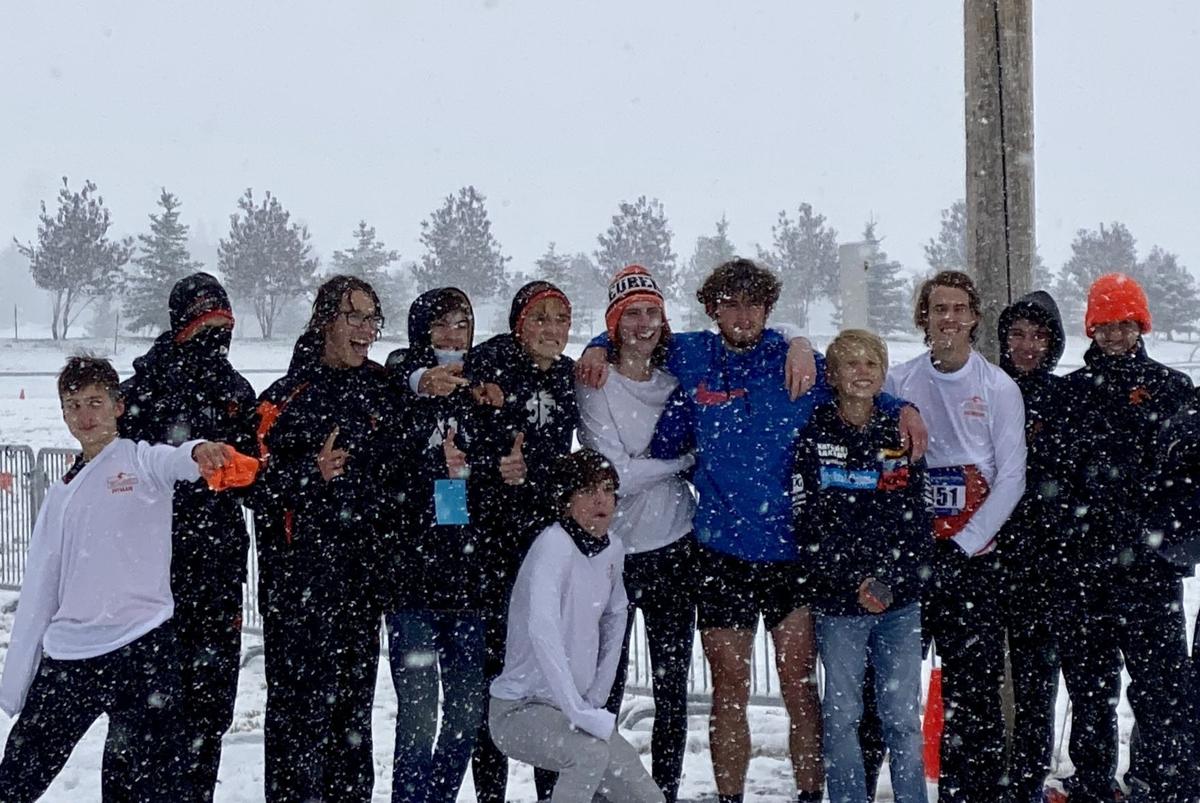 Townsend’s Emma Stolte finished third at State Girl’s B Cross Country with a time of 20:31 to lead the Bulldogs in the defense of their Class B team title Friday in Kalispell.

Manhattan’s Hallie Hemenway wins State Girl’s B Cross Country with a time of 20:10 Friday in Kalispell.

Wolf Point’s Zander Ackerman wins the State Boy’s B Cross Country meet with a time of 17:16 Friday in Kalispell.

KALISPELL — The weather service had issued a winter storm warning and forecast 4-8 inches of snow, but athletes competing for state cross country championships Friday at Rebecca Farm were grateful for any chance to compete when just months ago the whole season even seemed doubtful.

Wolf Point’s Zander Ackerman and Thompson Falls’ Justin Morgan traded leads at multiple points, but as they came down the final hill with the finish line in sight, Ackerman was thinking about his hometown and where he comes from.

“We’re a small town and no one would ever expect one of our kids to come out and win state,” Ackerman said at the finish line amid the snow, “so now I get to carry this back to the reservation with me.”

“He was really pushing me and made me go to my full potential and I’m thankful for him,” Ackerman said.

“Ever since I was a little kid I was running and now that I’m finally here, it feels great. My work has paid off and now I’m at the top.”

Their next closest finisher was Chaidh Lochridge from Eureka in 17:43.43. Lochridge led a team that defended its 2019 crown for its second state cross country title ever.

The Lions won with 63 points over Manhattan (85) and Three Forks (154). They placed all five of their scorers in the top 27 and all seven runners in the top 34.

Lions coach Andrew Gideon was pleased with what he thought was even better fight out of his team this year.

“Even our number seven kid, and I’d like to see the video, but I think he went from 39th to 33rd in the final 50 meters,” Gideon said.

They were helped by the return of last season’s third-place finisher, junior Isaac Reynolds, who had been out for almost a month after suffering a concussion in an incident unrelated to running.

Before they took off the start line, the senior Cooke told his teammates, “Our coach does this speech every year and he says, ‘Take your grab at glory’ and I just told them to think about that. It’s our last year, we have a chance and we can do it, we’ve put all the work out there and I was proud of them.”

Eureka possesses just three cross country trophies ever, including the two from the past two years on which Cooke will end his high school career.

“I just hope that I inspired my teammates to run their miles in the offseason and (emotional pause) and don’t take it for granted,” Cooke said of the legacy he hopes he’s leaving the Lions team.

He and his teammates were planning a celebration, but weren’t going to rest on their laurels long.

Manhattan’s Hallie Hemenway won the last four races of her season, including the state meet, pulling away from the field to finish in 20:11.0 and improve on her seventh-place finish from last season.

“I was telling myself it’s my senior year and I have half-a-mile left of my high school cross country career so I better just leave it all out there,” Hemenway said. “I went into the season thinking there might not even be a state so if I get a state meet, I’m going to give it my all.”

The snow started falling in earnest as the Class B girls (the third race of the day) warmed up in preparation.

“I think even though it is freezing, it is fun today to be here with my team and having an enjoyable time running and just enjoying what it is to be in cross country and the weather is a part of that so it adds to the memories,” Hemenway said in her post-race interview while wrapped in a blanket.

Class B girls lining up and will go at 2.

It turns out that a single point was the difference between the Bulldogs defending their championship from last year. Again, they edged Manhattan, which had taken three of four meetings during the 2020 season. Townsend finished with 59 points and Manhattan 60. Red Lodge was third with 99.

When Townsend’s Stolte crossed the finish line, she immediately turned to look for her teammates.

The quartet all scored in the top 12 to earn all-state status. Their fifth runner, Zoey Wickens, came in 27th.

But they still didn’t know for sure whether Manhattan had won. As they waited for final results to be posted online, the girls team went back to the staging area as the MHSA asked teams to do this year rather than waiting for a medal or trophy ceremony.

“I knew going into the race today that it was probably going to be single-digits,” said Townsend coach Brooke Dolan, adding she didn’t know whether it was going to be her Bulldogs or Manhattan walking away with the top trophy.

The Bulldogs got back on their bus while the boys team readied for their race on the start line. Coach Brooke Dolan was supervising the start when she got a call from her family and her son told her they thought the Bulldogs had won.

When news traveled to the parents who had gathered outside Townsend's blue and white team bus, cheers erupted while the Manhattan crowd parked next to them looked on.

“It’s one of the best feelings ever,” Stolte said.

“We used the term grateful all year long,” Dolan said of even being able to compete because they didn’t have any COVID-19 related quarantines or cancellations and that there was an opportunity to race a state meet.

“This one was pretty incredible.”

And with lots of racing throughout the season, the Bulldogs and Tigers know each other well.

“I always see them as an amazing team,” Stolte said. “We respect them so much.”

Bookmark this link for coverage of the all-class state cross country meet from Rebecca Farm in Kalispell Oct. 23-24, 2020.