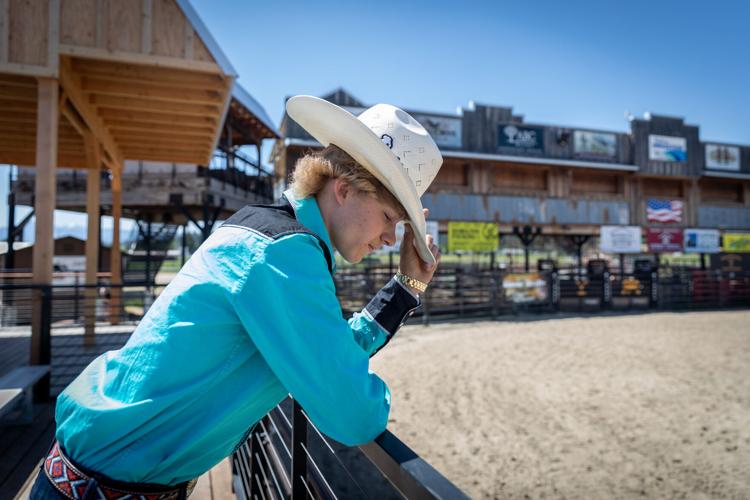 Devyn Hundley, 15, of Darby, is currently the Montana High School Rodeo Association state bull riding champion after winning in Great Falls last week. Hundley will move on to compete at the National High School Finals Rodeo in Gillette, Wyoming July 14 through the 19. 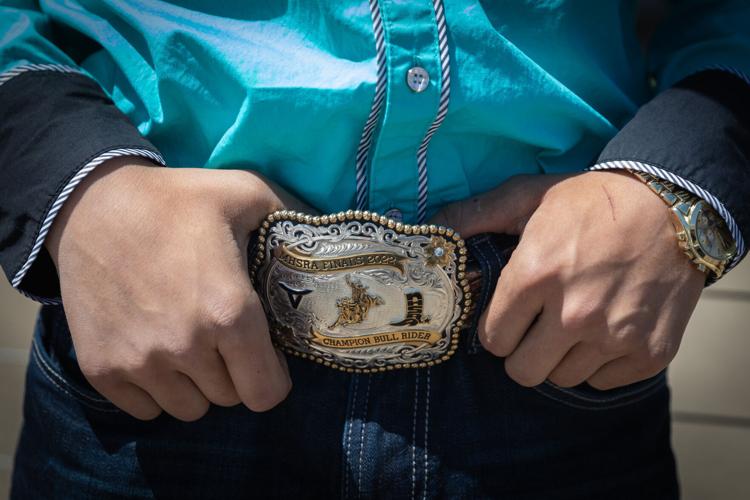 Devyn Hundley, 15, of Darby, is currently the Montana High School Rodeo Association state bull riding champion after winning in Great Falls last week. Hundley will move on to compete at the National High School Finals Rodeo in Gillette, Wyoming July 14 through the 19.

DARBY — Sporting the look and appearance of a pro-rodeo athlete with a teal button up shirt and a spotless white cowboy hat, Darby native Devyn Hundley will never say no to a saddle, an arena and a bucking bull.

For him, rodeo has been a part of his life ever since he first set foot at the rodeo arena in Darby.

“I remember I decided to try it one day and I just loved it from the start,” he said.

From the first sheep he bought for the Montana 4-H Club to riding his first steer at the arena at just seven years old, Hundley has made a name for himself throughout the Bitterroot Valley, and the rest of the state.

At just 15 years old, state bull riding champion Devyn Hundley is saddled up and ready to compete at the National High School Finals Rodeo in July. Hundley will get to represent his hometown of Darby and the Montana High School Rodeo Association in bull riding competitions.

The NHSFR, founded in 1947 by Claude Mullins and comprising more than 12,500 students competing in sanctioned rodeos every year, will host over 1,500 contestants from around the country to compete for national titles, awards and scholarships in Gillette, Wyoming.

Hundley will also be competing against three others from Montana — Ethan Marceau from Browning, and Gavin Knutson and Caden Fitzpatrick from Polson.

As a student-athlete in Darby, Hundley’s bull riding record is one that would make Bitterroot rodeo aficionados envious. Last year he placed fourth in bull riding for Montana high school rodeo, first in the Ravalli County Rodeo and was invited to hop on a saddle and ride with the NILE Stockshow and Rodeo in Billings.

Flash back to his childhood years and Hundley always remembers to credit his dad, Josh, and uncle, Kenny Beall.

“I got into the sport from my dad and my uncle Kenny. They really helped me a lot and pushed me to be better,” Hundley said.

For him, they were and will continue to be the people who sparked his passion and craving for rodeo action.

Throughout his rather short time in competitions representing the Ravalli County Jr. Rodeo Club around the state, Hundley has met pain and dirt a couple times.

Last year when he rode with the NILE Stockshow and Rodeo in Billings he was hurt after riding his first PRCA bull.

“I got stomped there pretty good," he said. "I got a hematoma on my calf and was on crutches for a month. He was a big sucker. If you’re like me and other riders, when you get hurt and you're out, you just want to ride. You're craving it. I don't think any rider cares what the doctor says. But when you feel good, you just decide to hop.”

Hundley’s mom, Amy, still gets nervous whenever she sees her son hop on a bull, especially after the accident in Billings.

“It was pretty scary, but I knew he would come back from it," she said. "I remember he just laughed it off and kept going. She said Red Eye Rodeo, a rodeo company out of Deer Lodge, helped Hundley with getting him back into practice so he could get back into riding.

From starting out with calves to steers and countless bulls, for Amy, a mother of four, it’s been a rollercoaster of a process seeing her son maneuver his way through rodeo.

“You have to regroup and be OK with what and where he's at,” she said. “As a mom, your heart stops a little bit, but that's what he loves to do. That's been his dream.”

Coming out from a successful state bull riding competition last year in Great Falls, Hundley is confident but feels there’s still room for improvement before heading to nationals in Wyoming with his family.

“I'm feeling good and I'm feeling confident. Last year wasn't the best, but I feel this year I could do a lot better,” he said.

Nationals start on July 14 and will last through July 24.