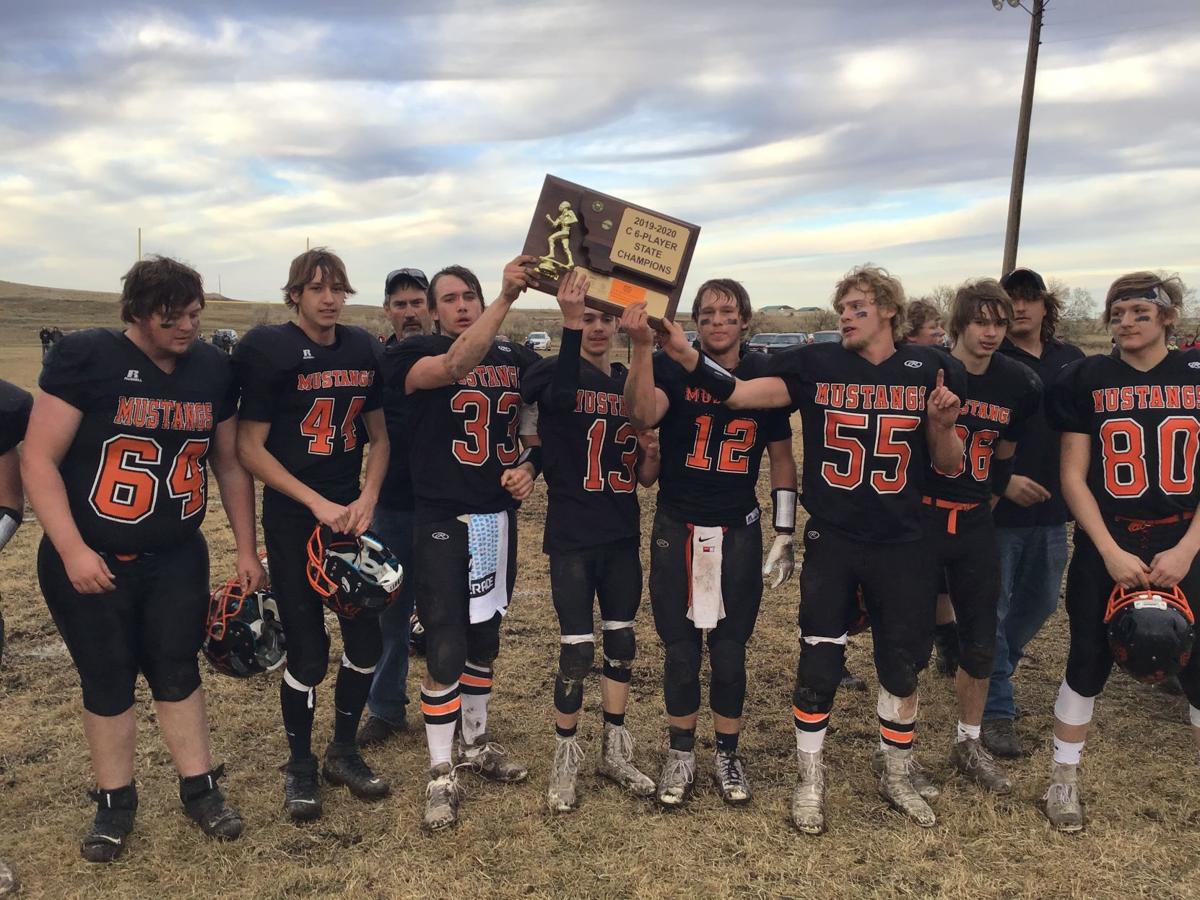 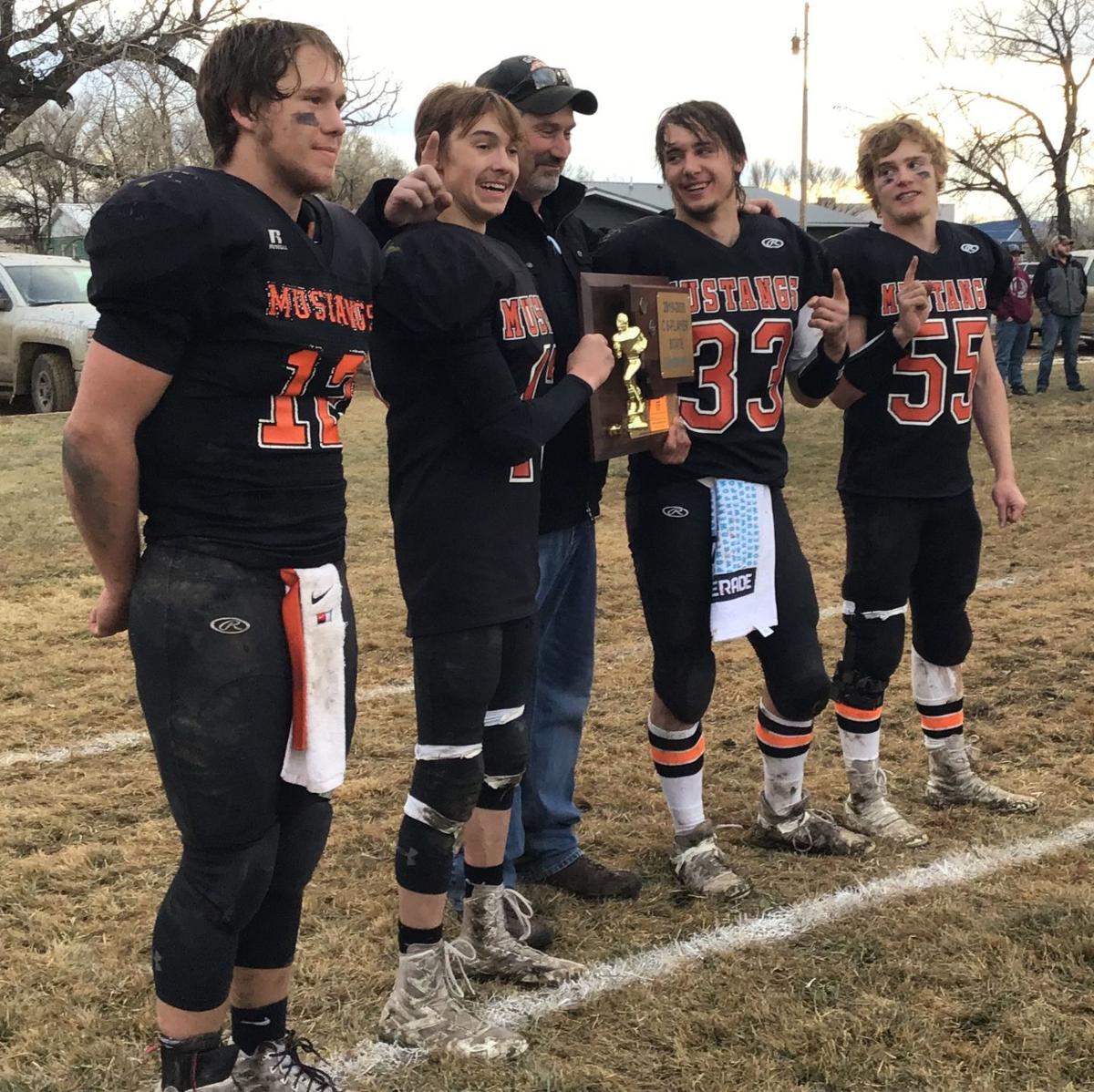 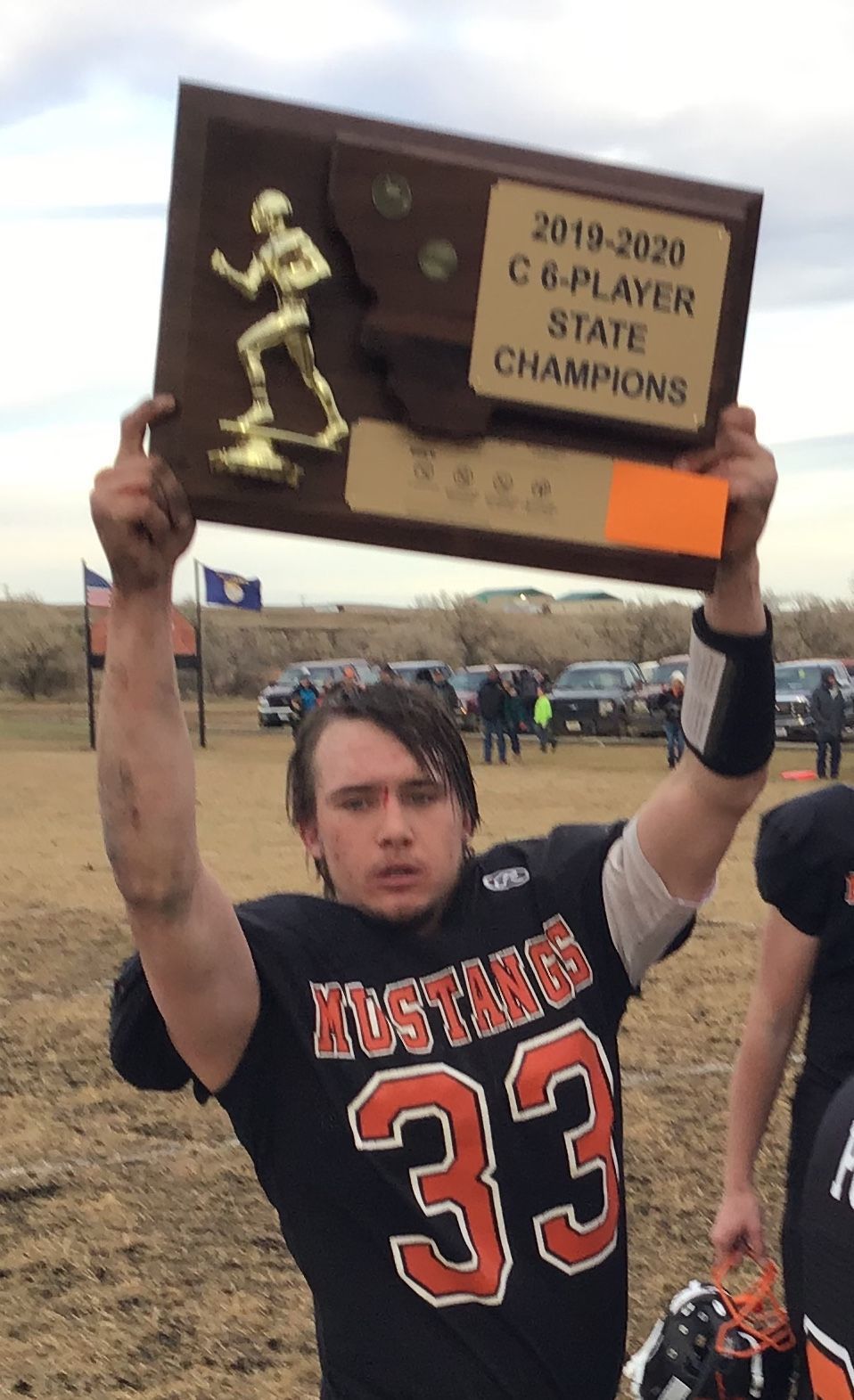 Edward Murnion with the 6-Man trophy. 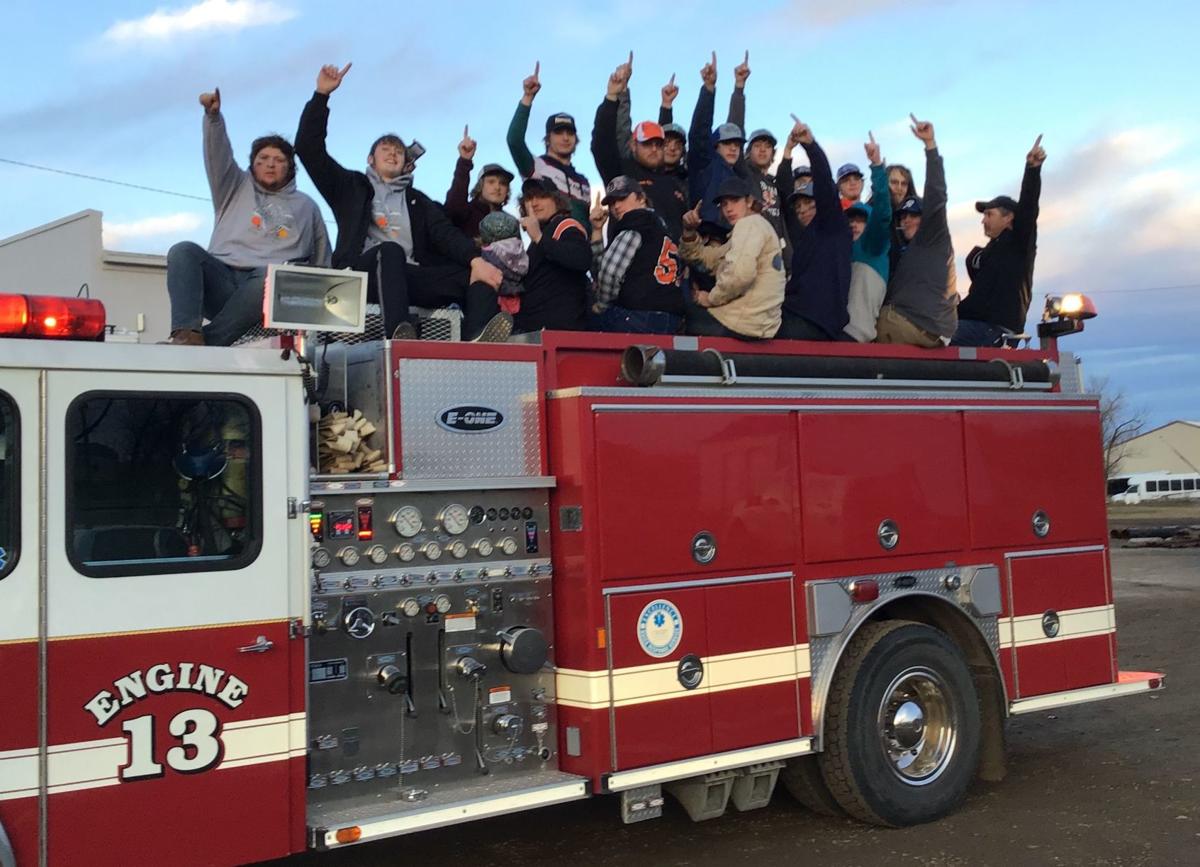 Jordan gets a fire-truck ride through town. 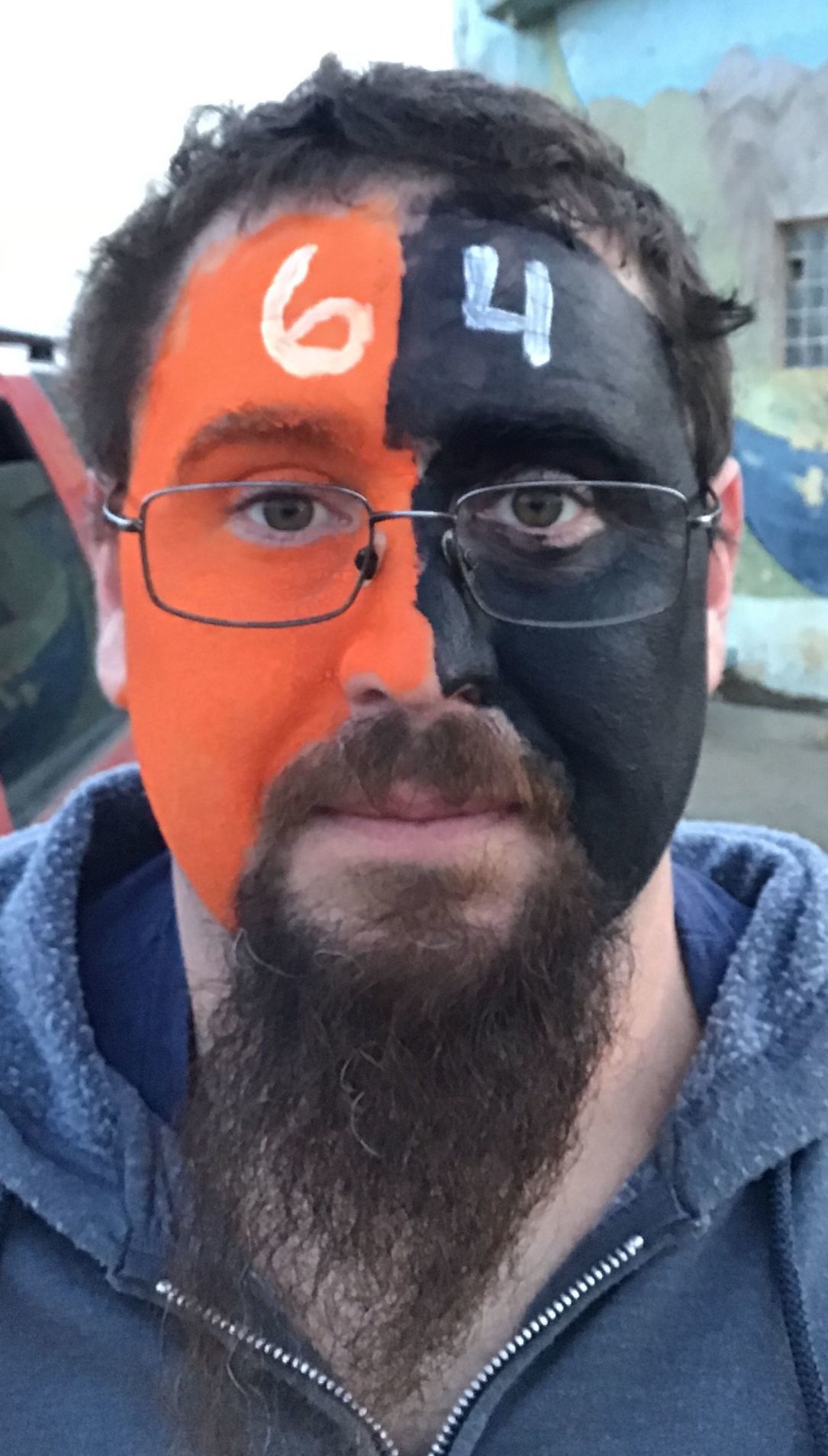 Edward Murnion with the 6-Man trophy.

Jordan gets a fire-truck ride through town.

JORDAN — The words they’d never once uttered in Jordan first arose in a trickle from the crowd in the third quarter — “State champs! State champs!” — and built to a gradual crescendo as the waning moments on a running clock ticked away on a blustery but balmy Saturday afternoon.

Finally, after the Mustangs put an orange ribbon on their 70-14 domination of longtime rival and defending state champion Wibaux in the state 6-Man final at Farrand Field, they could say it for real:

The football drought in The Big Dry was over. And it happened against the team they most wanted to defeat.

“I can’t even describe how great it is,” beamed senior quarterback Keenan Murnion, who threw seven touchdown passes as the Mustangs atoned for the 70-27 stinging suffered at the hands of the Longhorns in the same game a year ago. “Since the beginning when I imagined it I didn’t imagine it to be this great. I can’t even describe the feeling right now.

"It’s not like anything I’ve ever felt actually. It’s crazy.”

Murnion soaked up the ambiance of the school’s first title, watching in awe the engulfing of his teammates in a giant orange-and-black amoeba of supporters. The crowd surely outnumbered the town’s population of some 350 and probably included more than half of Garfield County.

As usual, it was a Murnion family affair for Jordan (12-1) — though they had plenty of help, most notably from Derek Reis, who scored the Mustangs’ first two TDs.

Rock-ribbed senior Edward Murnion scored three touchdowns and threw for another. Lanky cousin and fellow senior Cole Murnion caught two TDs and returned a fumbled punt for a third. Not to be entirely shut out of the family function, sophomore Dawson Murnion, Edward's brother, caught a TD pass of his own.

“Amazing,” Edward Murnion echoed of the moment. “I’ve never felt anything like this.”

The victory was capped off by the obligatory fire-truck ride, siren blaring, from the school to Main Street, where a crowd spilled into the street from the Hell Creek Bar and Ranchers Bar & Café. The players sat atop the truck, single fingers pointing toward a dusky sky.

“We’ve been pretty thankful for the community sticking behind us for the past few years,” said Ben McRae, the team's fourth senior. “I’m glad we didn’t let them down. It feels pretty dang good actually.”

Fittingly, McRae had the game’s final score, giving the seniors a grand TD slam and putting the Mustangs in position to reach a magic number that burned in the back of their minds since last November: 70.

That’s the points the Longhorns foisted on Jordan in last year’s game, signaling a renewed commitment to defense in Jordan.

The notion that they could reach 70 first popped up in a team huddle at the end of the third quarter, about the time those "state champs!" chants arose.

It's 6-Man, so a kick after McRae's score would result in two points and 71 total, but that was never an option.

“No,” affirmed Keenan, who hit Reis for the 70th point. “We were going for that one point.”

For Wibaux, it was a reversal of fortunes. The Longhorns entered the season with modest expectations after losing three standout seniors and then wondered if they’d even make the playoffs as injuries hit midseason.

But senior quarterback Tel Lunde spearheaded a young group that did just enough on offense and pitched five shutouts on defense.

“Who would have thought it this time last year?” Wibaux coach Craig Lunde asked rhetorically of making the title game, acknowledging that Saturday was nevertheless “a tough day.”

“They got a quick start on us and we didn’t start the way we wanted to. And we knew it could be that way.”

The Mustangs led 40-14 by halftime. When Jordan scored early in the second half, it was all over but the chanting.

And to do it against Wibaux? Everybody in eastern Montana respects the Longhorns’ prowess, with six 8-Man titles and last year’s first in 6-Man.