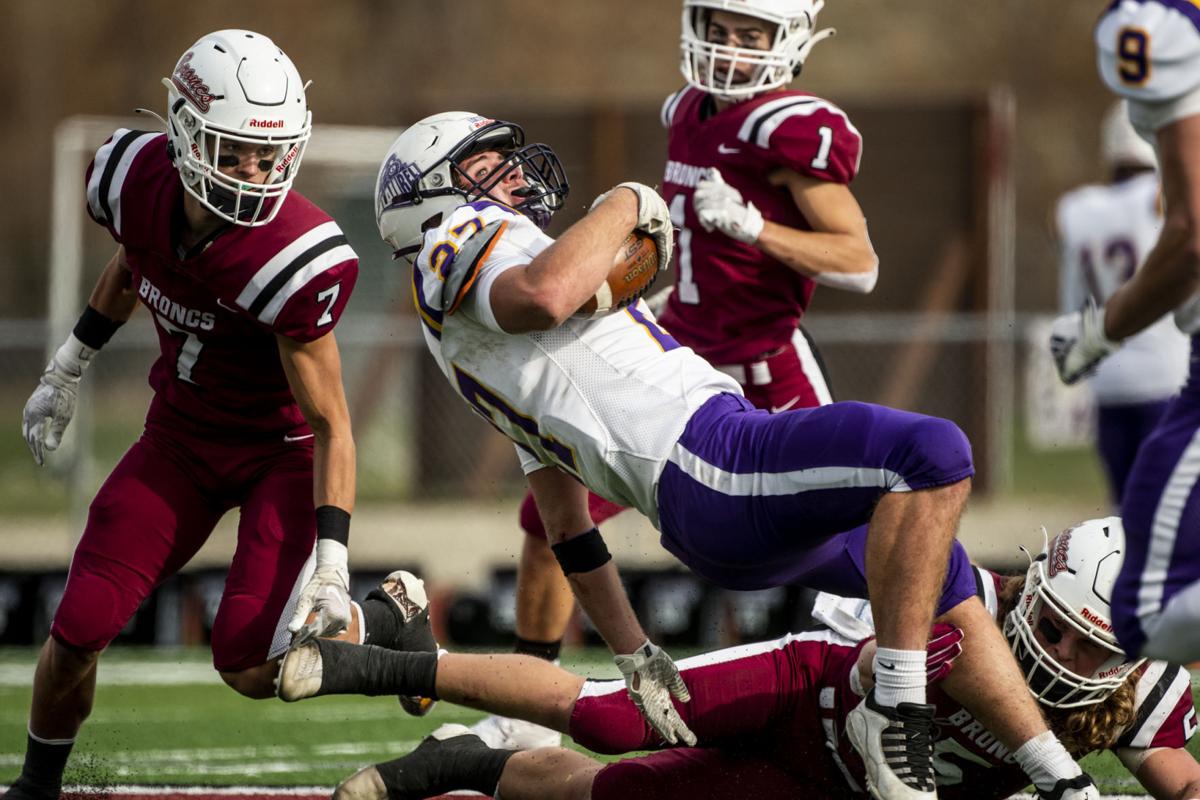 Laurel's James Ochs (27) loses his footing as Hamilton's Jaiden Klemundt (7) and Tyson Rostad (5) tackle him during their Class A semifinal football game at Hamilton High School on Saturday. The Locomotives defeated the Broncs 28-21. 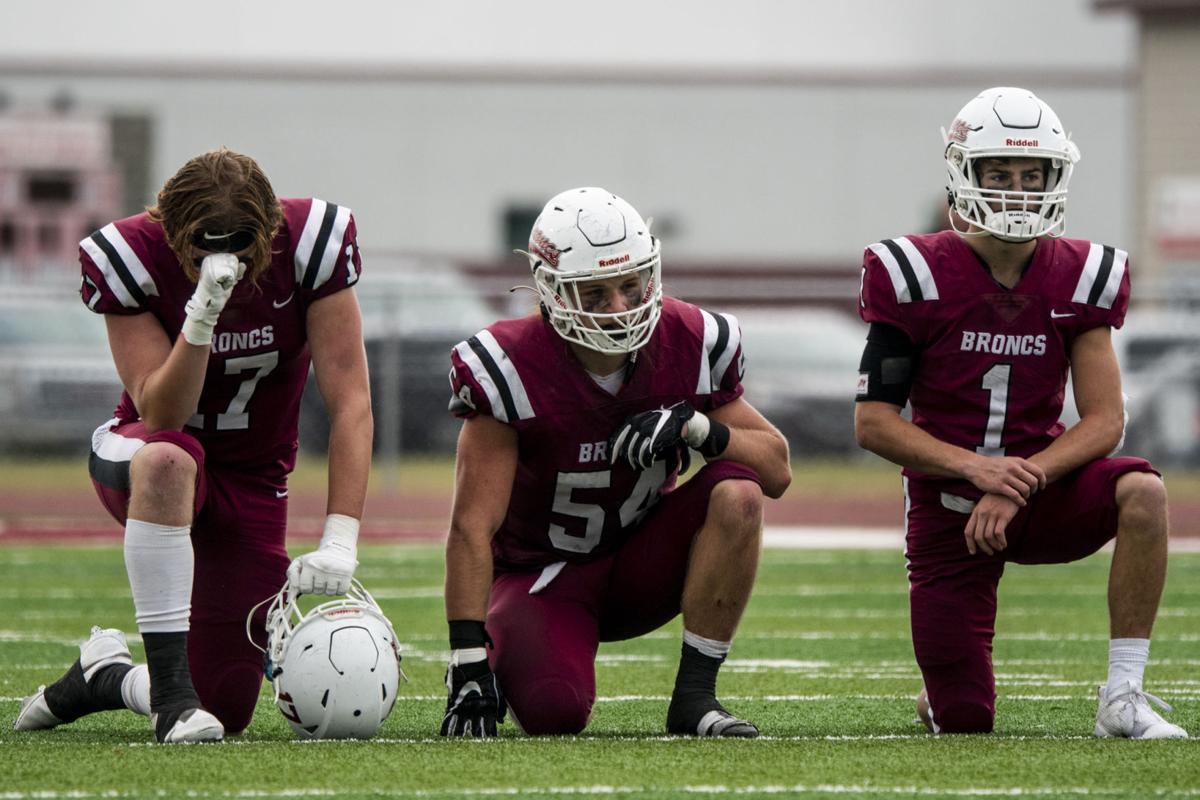 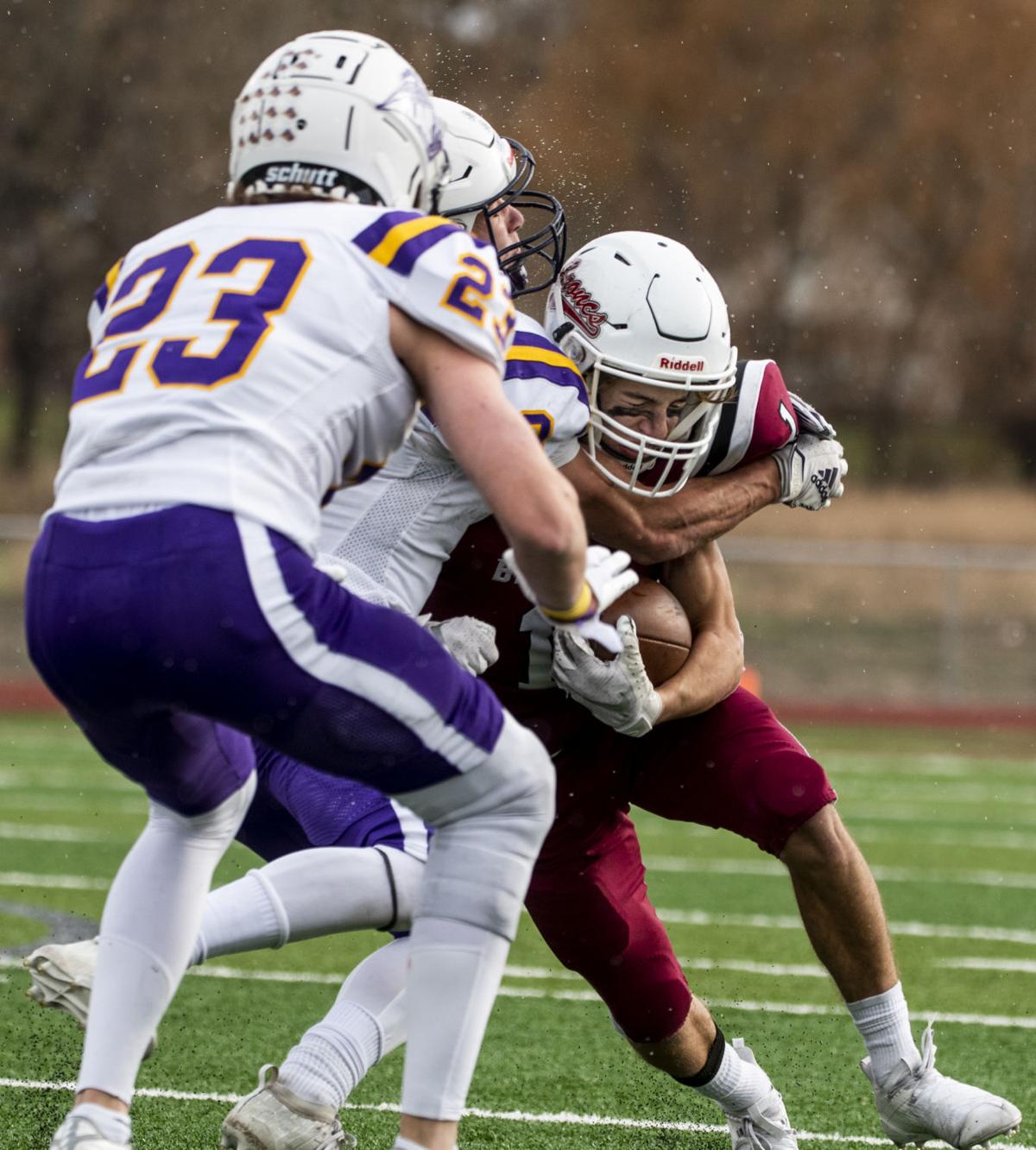 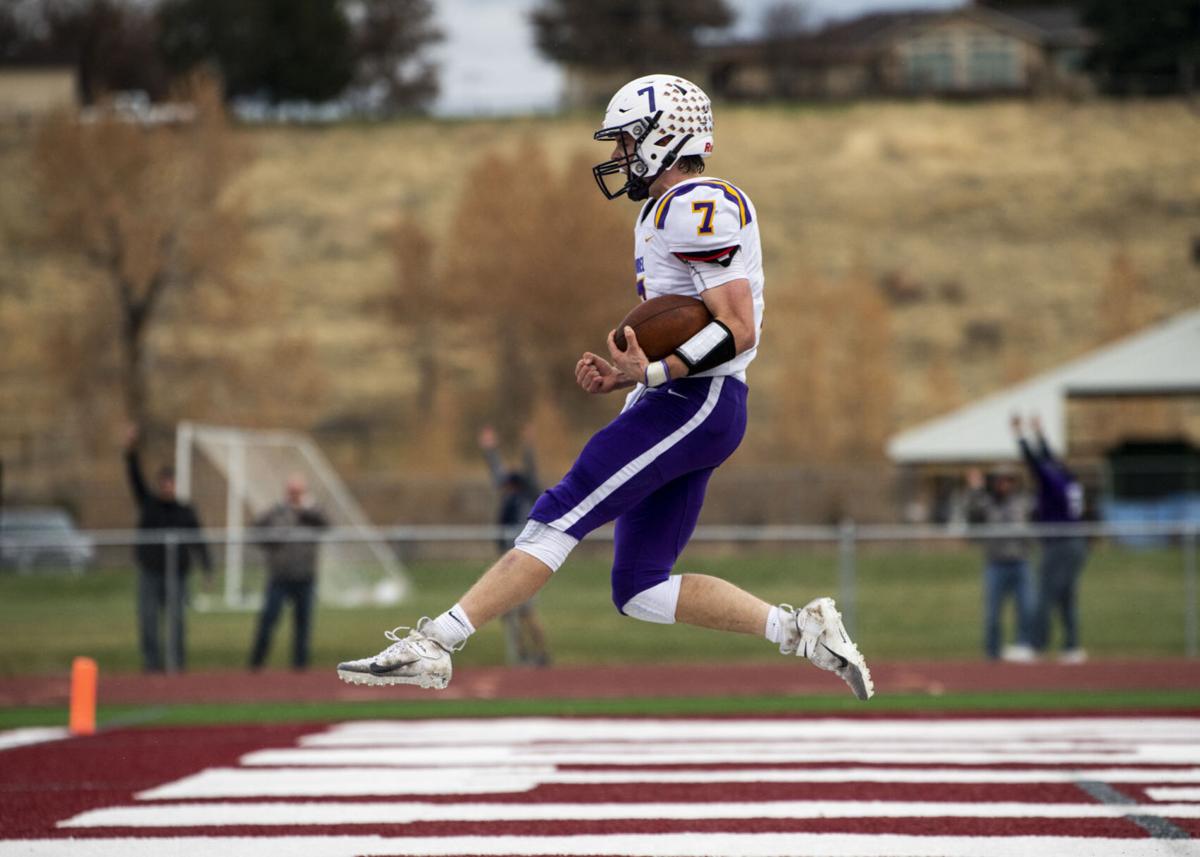 Laurel's Eli Aby celebrates as he scores a touchdown during their Class A semifinal football game at Hamilton High School, Saturday, Nov. 7, 2020. . 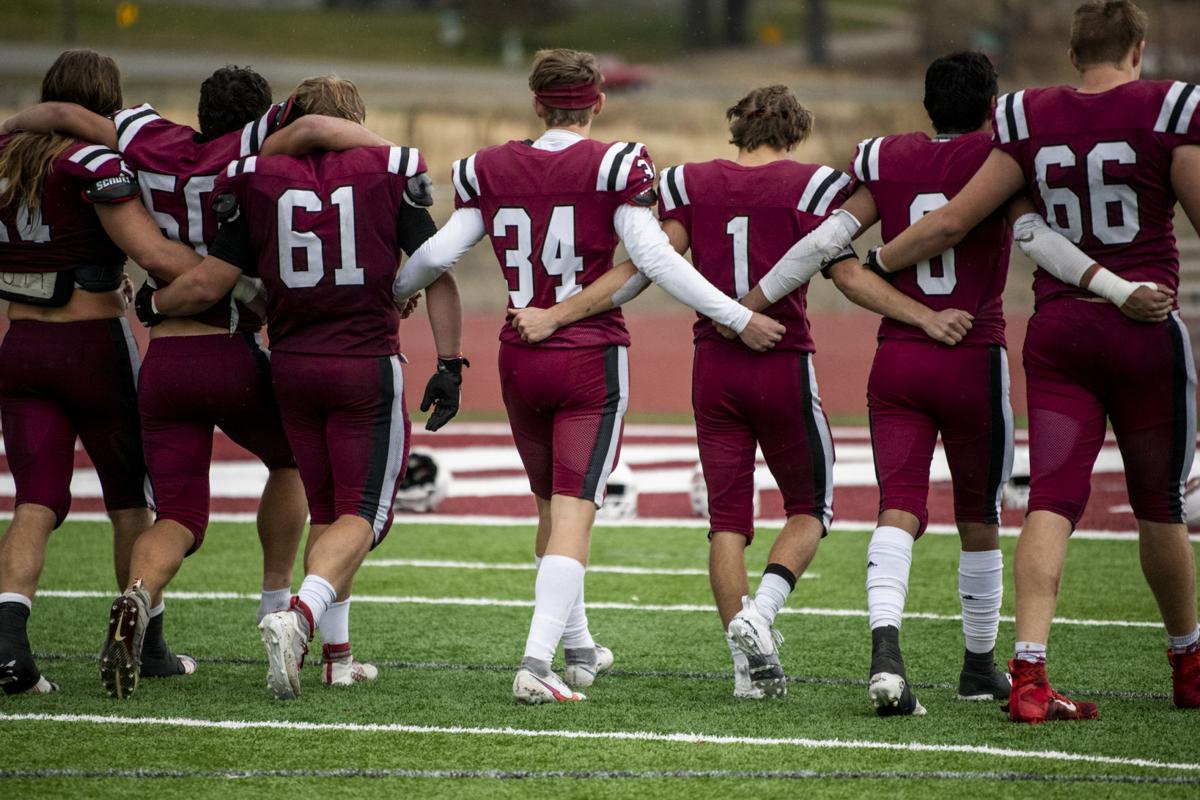 The Broncs seniors walk off the field arm in arm following their loss to Laurel in the Class A semifinal football game at Hamilton High School, Saturday, Nov. 7, 2020.

Laurel's James Ochs (27) loses his footing as Hamilton's Jaiden Klemundt (7) and Tyson Rostad (5) tackle him during their Class A semifinal football game at Hamilton High School on Saturday. The Locomotives defeated the Broncs 28-21.

Laurel's Eli Aby celebrates as he scores a touchdown during their Class A semifinal football game at Hamilton High School, Saturday, Nov. 7, 2020. .

The Broncs seniors walk off the field arm in arm following their loss to Laurel in the Class A semifinal football game at Hamilton High School, Saturday, Nov. 7, 2020.

HAMILTON — Eli Aby cradled the football in his right arm against his chest as he approached the 50-yard line Saturday.

The Laurel quarterback, who had made sure to hold the ball tightly during a game-sealing drive and victory-formation snap, switched the ball to his left hand and raised his arms toward the sky in triumph. He high-fived and hugged running back Beau Dantic, each one patting the other on the helmet as the celebration began.

The Locomotives (7-1) had just avoided a complete derailing, pulling off a rare rally over the final three drives to outlast Hamilton (10-1) in a physical 28-21 thriller after blowing a 14-point lead in the fourth quarter on an overcast and drizzling day.

The nail-biting victory, which included multiple tense fourth-down measurements that momentarily silenced the crowd in the Bitterroot Valley, kept the Locomotives chugging along the playoff track and added another destination to their itinerary: the State A championship game for the second season in a row, this time against Billings Central.

“It was probably one of the funnest games I’ve ever played in,” Aby said. “It was really competitive. And getting back to that is just a great feeling, to the state championship.”

Aby got Laurel back on track with the game knotted at 21-21 and 10:17 to play. He found success with his arm and his legs that drive, like he did in the first half before Hamilton slowed him in the third quarter and picked him off. That was his lone blemish on his way to completing 9 of 17 passes for 165 yards and one touchdown and running 10 times for 48 yards and two scores.

Aby’s 7-yard scamper into the end zone one play after a pass interference call gave Laurel a 28-21 lead with 7:52 to play. It was the drive one would expect to be led by a Montana State-bound player, and it came with Laurel in a tied game in the fourth quarter for the first time all season.

“It put young kids in a tough situation, and they rose to the occasion,” said Locomotives coach Mike Ludwig, whose season-long message of “Don’t hit the panic button” was being tested on the biggest stage of the season so far. “They got the job done when they needed to.”

Far from over, Laurel needed a stop — and the Locomotives hadn’t stopped Hamilton the previous two drives as the Broncs flipped the momentum by sticking to coach Bryce Carver’s message of “Ride the wave.” The Broncs had bustled their way back into the action by overcoming a slow start in a game they never led after they entered the day having trailed for just 6:28 in the first 432 minutes of the season.

Tyson Rostad ran for a 2-yard touchdown on the first play of the fourth quarter, and he later connected with Liam O’Connell, who made a diving, fingertip catch for the tying score with 10:17 to play. He finished 19-of-28 passing for 216 yards, two touchdowns and one interception, and he ran 14 times for 58 yards.

But for all the success Rostad has had this year transitioning from wide receiver to quarterback, he came up just 1 yard short on a need-to-have-it fourth down. It was the only time the Broncs were stopped in their six fourth-down attempts as he got tackled within several inches of the first-down marker at the Laurel 47-yard line with 4:53 to play.

“They were better than us today,” said Carver, whose four teams have lost in the title game twice and semifinals twice. “We just didn’t make enough plays to win the game. It’s funny: We had a talk last night with our kids, and I said, ‘You know what, football’s a game of inches,’ and that’s what it came down to.”

Still not over, Laurel needed to grind out the clock. It’s something they know how to do playing in the physical Eastern A conference. And they did it again, finishing the day by rushing for 219 yards on 44 carries as the Broncs focused on taking away stud receiver Jack Waddell.

James Ochs, who had a tackle for loss on Laurel’s final defensive drive, piled up a team-high 85 yards on 12 carries. Dantic has the most carries, running the ball 14 times for 33 yards, one score and the game-clinching first down. Aby got Dantic that opportunity to seal the game by converting a fourth-and-1 earlier in the drive.

“On that last drive, when our offensive line dug down and started pounding the ball, that’s how we play,” Aby said. “We wanted to go out there and finish that game.”

“When you get this far in the playoffs, you’ve got to be willing to take some risks,” Ludwig said of going 3-for-3 on fourth downs.

Perhaps the biggest of those decisions came with Laurel at Hamilton’s 7-yard line late in first half. Hamilton, which started slow and looked like the team that traveled 5 1/2 hours, had gotten on the board the drive before when Rostad connected with Ben Rooney, who ran 16 times for a game-high 95 yards, on a play-action pass for a 7-yard score on fourth down. That cut Laurel’s lead to 14-7 after Dantic started the scoring with a 2-yard touchdown run and Aby scored on a fourth-down sneak from the 1-yard line.

With the half winding down, Aby rolled out to his right on fourth-and-6 and stuck a low pass into the arms of Emmet Renner, who caught the ball in the end zone while making a head-first drive back toward the goal line with 18 seconds left in the half. It was one of Renner's seven receptions for 142 yards, and it proved to be big in a seven-point outcome.

“I’m very proud of our kids for how they fought — they could have easily folded that up in that first half — and came out and just really competed for that next 24 minutes,” Carver said. “It almost got it for us.”

Laurel moves on to the championship game at Eastern A foe Billings Central, which beat defending state champ Miles City 17-10 Saturday. The undefeated Rams are the only team to beat the Locomotives, scoring a 28-14 win Sept. 25.

“Our mantra, our slogan was, ‘Leave no doubt.’ Leave no doubt that we’re the best football team in the state,” Ludwig said as a nearby train started to blow its horn — a fitting ending to the day for the Locomotives.

2020 semifinal round of the Montana high school football playoffs

Coverage of the semifinal round of the 2020 Montana high school football playoffs.

Roundup from Week 11 of the high school sports season. Football playoffs continued and divisional volleyball tournaments were all over the state..

'He checks boxes': NFL future for Montana State’s Troy Andersen is not if but where