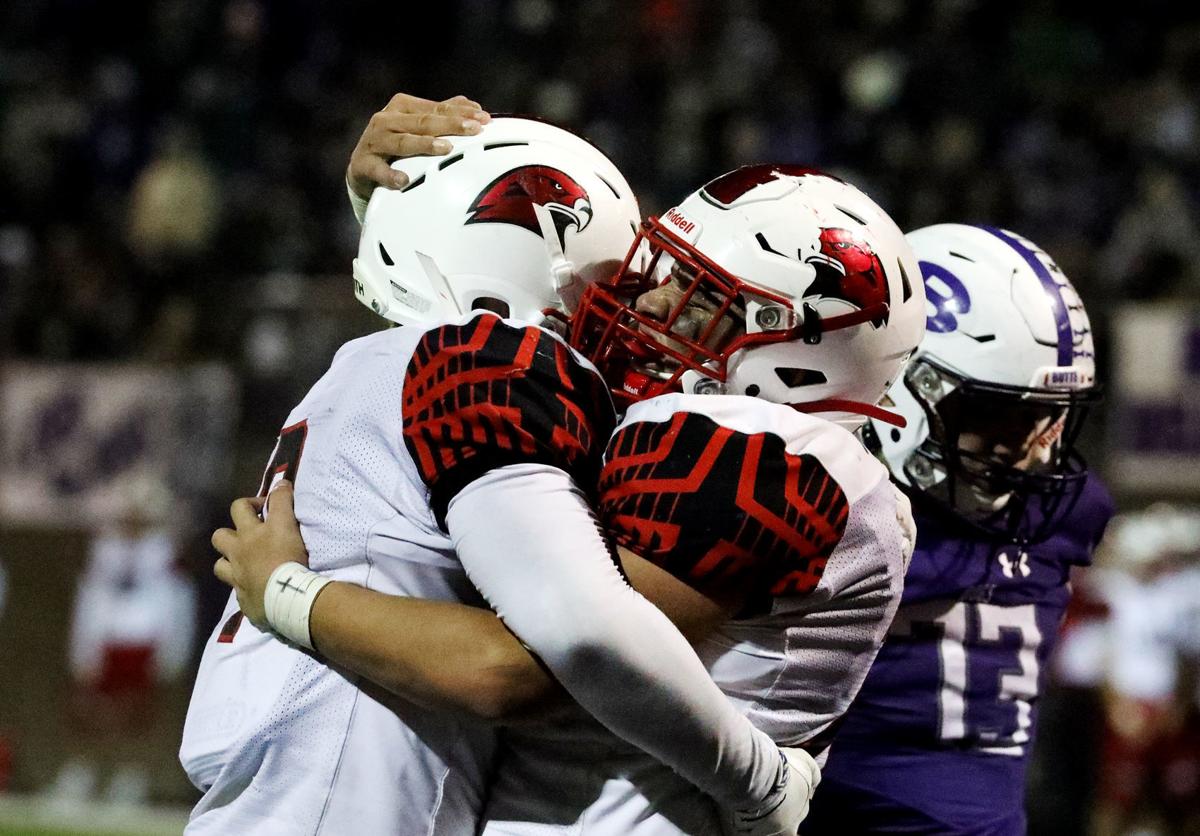 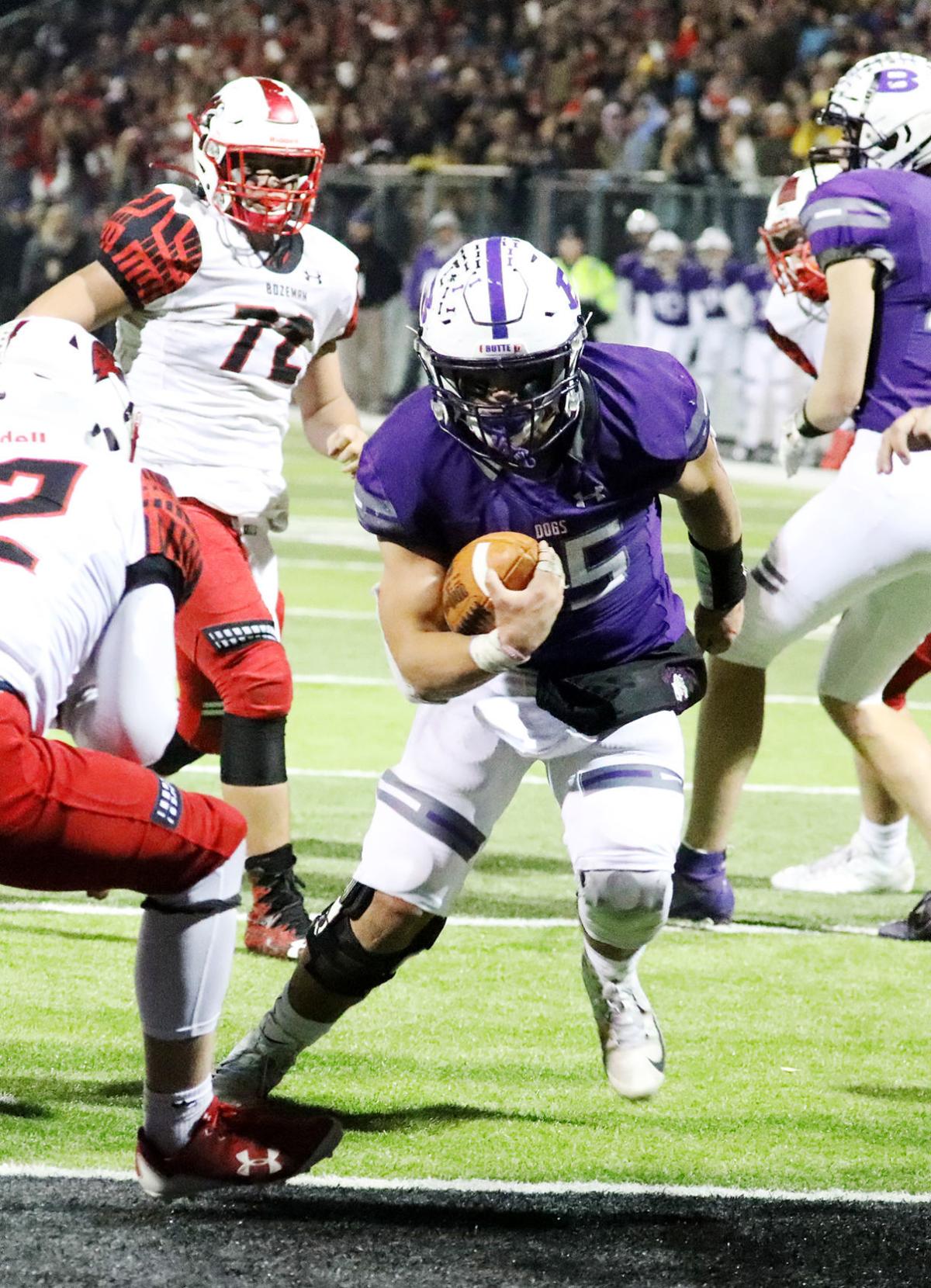 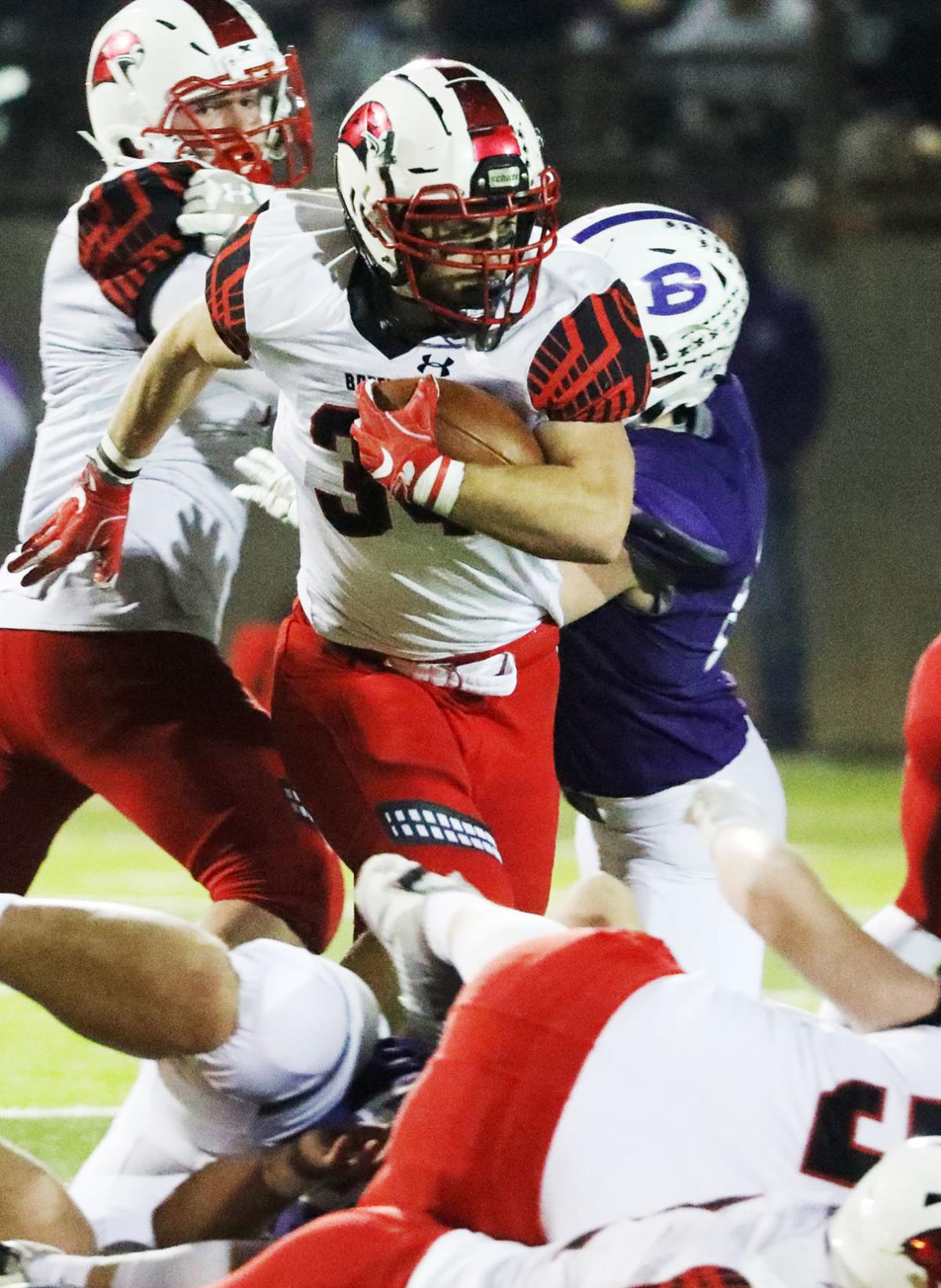 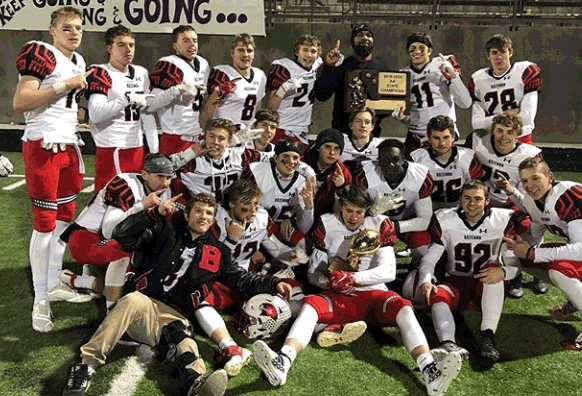 The time-old adage that, “Bad things comes in threes” had a slight twist Friday night.

Instead of bad things, it was Bozeman running back Asher Croy.

The future Montana Griz and senior Bozeman ball carrier’s 333 yards and three touchdowns on 33 handoffs lifted the Hawks to their fourth Class AA state title of the decade, downing Butte 49-28 in an electric game at Naranche Memorial Stadium.

When asked to describe his running style, Croy keeps it simple and in homage to his future team.

“I like to run downhill,” Croy said. “Chase Reynolds was my guy at the Griz. That’s why I wear No. 34 and being like him was my dream, I wanted to run like him growing up.”

Croy started and ended the Hawks’ scoring, his first score coming in response to an impressive opening drive from the Butte offense, which went down the field in less than three minutes and capped it off with a 52-yard touchdown toss from quarterback Tommy Mellott to Jake Olson.

Butte head coach Arie Grey felt that the first half duel that ended 14-14 represented the fact of how good both teams were, but said that Bozeman’s physicality and talent on the defensive and offensive line were a big factor.

“Two good teams, and back and forth in the first half,” Grey said. “Hats off to Bozeman. They came out and controlled the line of scrimmage, and they’re a dang good football team… Our kids battled all night, they’re a great group and I love them. This doesn’t define them.”

When Grey was asked if the Hawks were the best team on the line of scrimmage that the Bulldogs have faced, he acknowledged Bozeman’s success.

“I don’t know, they’re really good,” Grey said. “They did a nice job of creating angles, being physical, I was very impressed. We knew coming in that they were good up front on both sides of the ball.”

Bozeman’s ability to run the ball, which included over 200 second-half yards from Croy, decided the game late, but not before Bozeman’s quarterback Jake D’Agostino provided a classy performance to help start the Hawks’ breakaway.

The senior quarterback notched the first of his three touchdowns to junior running back/tight end Kenneth Eiden IV to help Bozeman take a 14-7 lead that was equalized by Mellott before the end of the half.

But it was the second half scoring passes to Carter Ash and Eiden at the end of a tense third quarter that the QB and Hawks put a stamp of control on the contest, going up 28-14.

Head coach Levi Wesche praised the pair of D’Agostino and Eiden for their performance.

“Jake D’Agostino played a lights out game tonight,” Wesche said. “I thought every single member of our team showed up tonight. Nobody let down… Eiden’s unbelievable. Probably should’ve gotten him a couple more touches on offense, but Croy was in such a groove that we just kept handing him the ball.”

While Ash brought down three receptions for 59 yards and his score, Eiden ran for 44 yards from his full back position, and the junior’s two touchdown catches came from the full back and tight end positions respectively.

Does the 6’1” hybrid enjoy popping up in different spots? Absolutely.

“I love it,” Eiden said. “I love being part of the action on every play. I love having the opportunity to make the play every single time, it’s really fun.”

Eiden also added his 13th sack of the season from defensive end, as part of his 14 total tackles.

The junior Hawk praised Mellott, saying that the Hawks’ respected how important the Bulldog QB was to the Butte offense, and how important it was to Bozeman to pressure him.

“[Mellott’s] an amazing player,” Eiden said. “He has been all year. He was the main point of our gameplan, and we had a mindset that we had to stop him and we got it done tonight.”

Mellott racked up 291 passing yards, completing 20 of 37 passes. The future Montana State player also added 80 yards on the ground, but Butte was only able to average 3.62 yards per rushing attempt, a testament to the Bozeman defensive effort.

Wesche credits the state championship victory to winning the battle on the line of scrimmage, but also to a tactical decision: going from a vocal snap to a silent one.

“We controlled the line of scrimmage,” Wesche said. “Which is what we had to do if we wanted to win. I believe we rose and played to the moment… Our team is extremely focused, and thought about if we had to come to [Naranche], what we would do, just from the 2012 experience, and the biggest thing was handling the crowd noise. It got Billings West a couple times, so our best answer was to go on a silent count.”

Croy also mentioned that the Hawks’ went on a “clap” count on offense due to the overwhelming noise of the Butte home crowd at Naranche.

“This was the first time all year we went off clap,” Croy said. “This place lives up to everything they say. It was loud, the fans were incredible, especially Butte’s.”

In an interview before Friday night’s contest, Wesche had mentioned that the experience of the 2012 battle between Butte and Bozeman, which the Bulldogs’ won 38-36 on a game-winning field goal, is something that pushed Wesche to implement the silent count.

However, the Bozeman head coach also mentioned that the sting of 2012 will remain, but that he’s happy his Hawks have continued to make new memories.

“Of course, yeah it does,” Wesche said. “Hopefully some of our 2012 players take a little solace in it, but that hurt that never goes away. It’ll continue to drive me now until I’m done coaching.”

Any chance Butte had to mount a comeback was ended when Bozeman defensive tackle Cameron Spenser read a short Mellott pass, intercepted it, and took it to the endzone to establish a 35-14 lead.

While Butte’s offense was able to add a couple more scores, Croy and the Hawks’ rushing attack was unstoppable late in the game, and Bozeman responded to each Bulldog touchdown with one of their own.

Grey said the loss was at an unfortunate time, but that he was thankful for Mellott, senior running backs Kameron Moreno and Kobe Moreno and the entire senior class’ efforts over their four years.

“You look at what we’re able to do all year,” Grey said. “We did some really nice things. It’s just unfortunate that the last one was the one that didn’t go the way we wanted it to. I’m proud of the senior class, what they’ve done, the culture they’ve created. You couldn’t ask for a better group of young men.”

For Wesche, a key thought was about how Bozeman rebounded from their second-week loss to Missoula Big Sky, and how the response to that game is something that drove the Hawks all the way to a state championship trophy.

“We were overconfident and the weather played a factor that night,” Wesche said. “I thought we stepped up then. We did what we were capable of: focus on getting better at practice, every day, every game. We focused on what was right in front of us, one day at a time. We talk about it: just try to be uncommon every single day.”

With four state titles in a decade, Bozeman’s “uncommon” is getting pretty common.