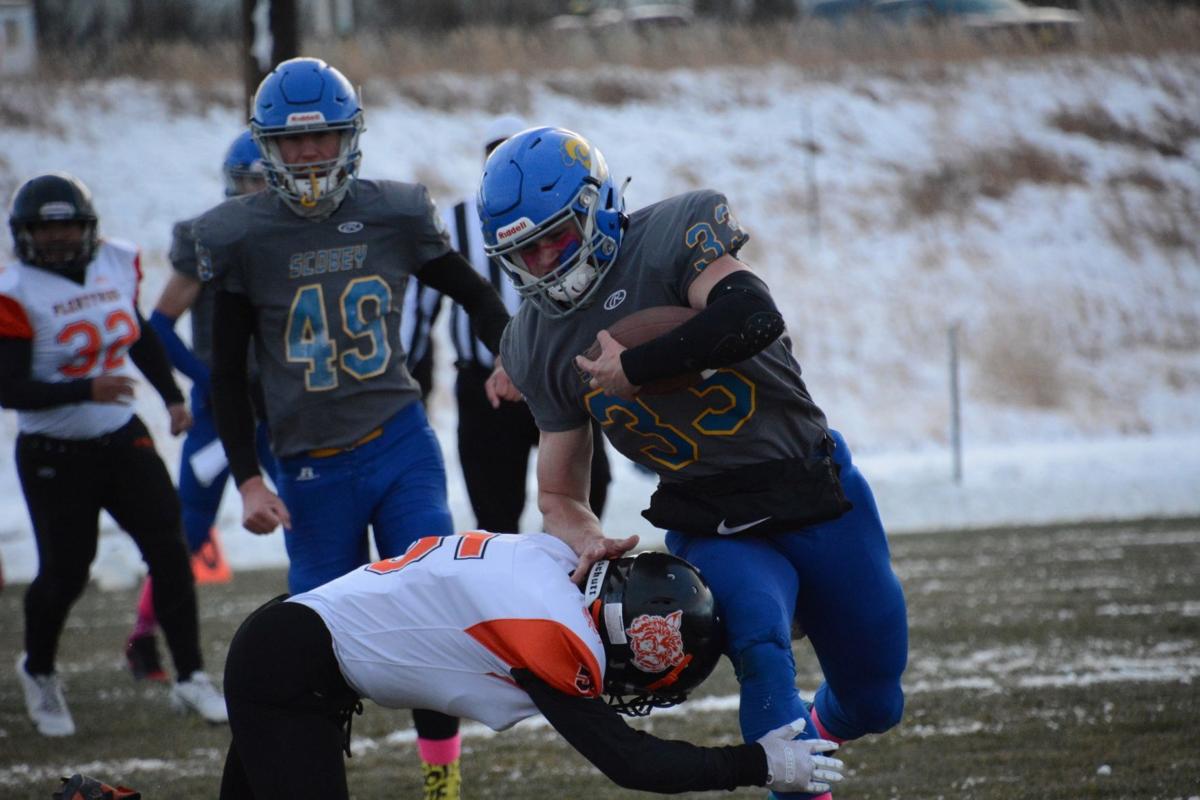 Scobey's Payton Leibrand runs the ball in a game earlier this season against Plentywood as teammate Cole Taylor looks on. The Spartans will play Drummond-Philipsburg for the 8-Man football championship on Saturday in Drummond. 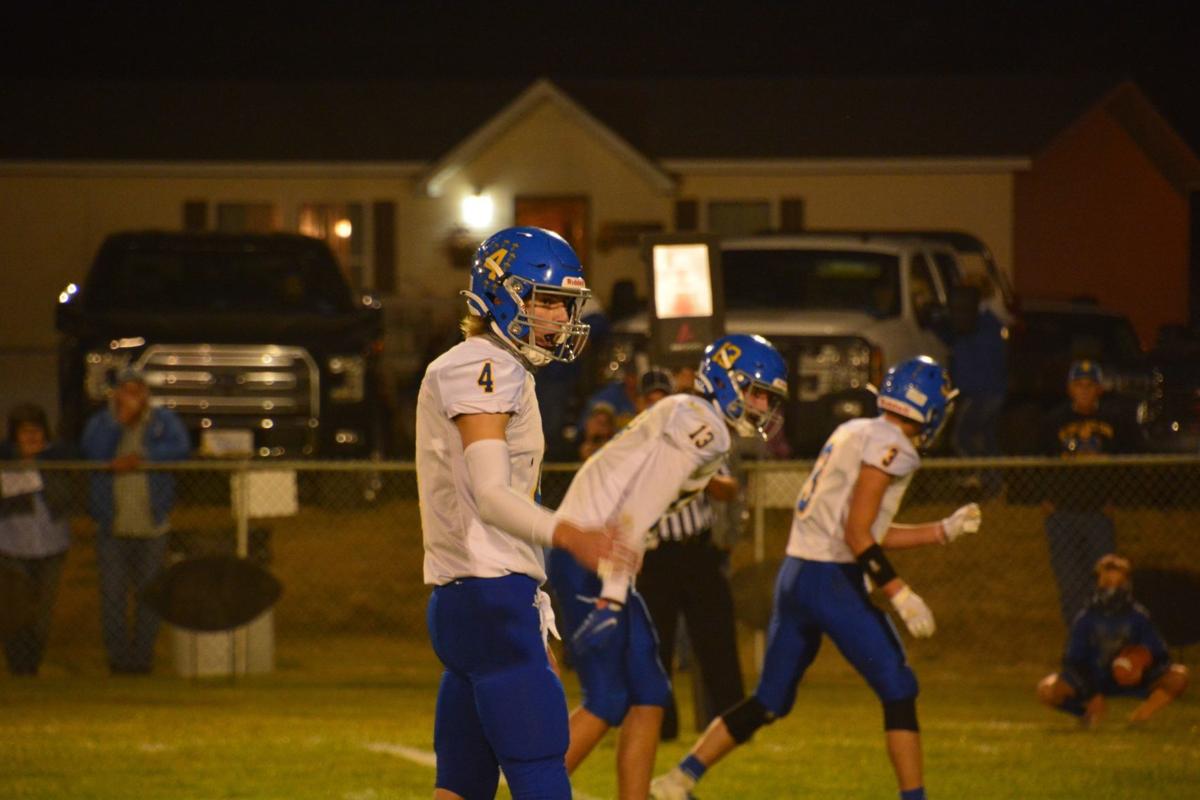 Scobey's Payton Leibrand runs the ball in a game earlier this season against Plentywood as teammate Cole Taylor looks on. The Spartans will play Drummond-Philipsburg for the 8-Man football championship on Saturday in Drummond.

MISSOULA — When Scobey last played for a state football title, the words Flint Creek may have led someone to conjure up images of a Montana waterway.

The year was 2002, and Flint Creek, the name for the Drummond-Philipsburg co-op, was still 12 years away from becoming a necessary reality for the survival of rival football programs. Now, those words represent the current powerhouse in 8-Man football: the Flint Creek Titans.

Drummond won five of the next seven state titles after Scobey won the 2002 crown. When the co-op began, it took some time for the Titans to regain their footing, but they returned to the top by winning the 2017 and 2018 titles.

Flint Creek (11-0) is now aiming for its third title in four years under coach Mike Cutler while Scobey (10-1) is trying to regain its status as a team to be feared in the 8-Man ranks after winning three titles in five trips from 1989-2002. The teams will kick off at 1 p.m. Saturday in Drummond.

“These kids, at the beginning of the year, I knew that this group had a chance,” said Cutler, who took over for 36-year head coach Jim Oberweiser in 2017 and has gone 43-4 heading into his final game, which didn’t hit him until Friday’s practice ended with his players “awfully squirrelly and excited.” A Montana Western Hall of Famer, he decided before the season to retire after this year so he can watch his son, Kade Cutler, play at Montana State.

“We needed a few things to happen and some kids to take on those spots that we were looking to fill, and they sure did,” Mike Cutler continued. “I couldn’t be prouder of this group of kids. They did everything myself and the other coaches asked them to do.”

Scobey, on the other hand, has been building to this moment under seventh-year head coach Brock Berryhill, a Tennessee native who graduated from Nampa, Idaho, and coached at Boise High School before moving to Scobey, his wife’s hometown. The town in extreme northeast Montana is reinvigorated with the success of the Spartans, whose staff includes defensive coordinator Larry Henderson, the head coach from 1985-2001 during Scobey’s previous reign.

To make it here, Berryhill and his team had to overcome not just their opponents but the coronavirus pandemic. He feels he had the perfect group to handle that, sporting 27 kids, including three from Opheim, the school about 40 minutes away that makes up the co-op.

“One thing the pandemic taught us is to not take any day for granted,” said Berryhill, whose team began its 10-hour trip Thursday, spending Thursday night in Great Falls and Friday night in Butte, about one hour from Drummond. They’ll spend Saturday night in Great Falls, making for a four-day trip, which Berryhill didn’t feel would be allowed if the team hadn’t been embraced as much as it has by the town and school.

“Our focus is on the game and winning the game, but they also have to enjoy it because these moments don’t happen all the time,” Berryhill continued. “They’re not tight about it, they’re fairly loose. They’re a different crew. They’re goofballs in a good way where they say or do something and you shake your head but then you turn away and start laughing. They have a devil-may-care attitude, and that’s how we’ve gotten this far is they’re not worried about what they can’t control and they’re just playing for each other.”

The Titans and the Spartans will do gridiron battle worthy of their nicknames. Both teams take pride in running the football, although they also have capable passers and talented skill players on the outside, making for the potential for both a physical ground game or an aerial shootout.

Flint Creek is led by the rushing attack of quarterback Kade Cutler and running back Preston Metesh, and has receivers Avery Metesh, Leyton Wagner and Ethan Parke on the outside. The Titans are averaging 55.81 points per game and allowing just 6.36 points for a differential of plus-49.45 points.

The only game in which they scored fewer than 46 points was when they were missing Kade Cutler but still put up 36. They allowed 18 points and won by 30 in the semifinals, both of which were their worst in those categories. That’s just how dominant they’ve been.

“Their speed and athleticism stand out,” Berryhill said. “They got some guys that can motor. It’s not just Kade Cutler. It’s Metesh, both of them, the brothers. Their linemen are not huge but can get off on the ball. They’re really, really good. We’re going to have to play really well to do what we can do. They’re well-coached. They’ve got a nice system and play super hard. We’re going to have to match their intensity.”

Flint Creek’s semifinal win came over Fort Benton, which Mike Cutler said is the closest comparison for the type of team he sees when scouting Scobey. The Spartans enter the title tilt having won 10 games in a row since dropping their season opener to Westby-Grenora.

Scobey is averaging 46.9 points and allowing 14 for a differential of plus-32.9 per game. The Spartans haven’t allowed more than 28 points, which they gave up in the season opener and the semifinals, the latter a 16-point win.

Quarterback Jayce Tande leads the charge and is bolstered by wide receivers Caden Handran, a 6-foot-5 basketball standout, and Parker Cromwell in addition to tight end Addison Stentoft and running backs Payton Liebrand and Colter Oie. Defensively, Oie has come up with clutch plays in the postseason at linebacker, as has defensive end Cole Taylor, one of three Opheim players.

“They’ve got athletes everywhere,” Mike Cutler said. “They’ve got them on the field, on the sidelines, in the stands, in the crow’s nest. They’re extremely well-coached. Their QB is as salty as they come when it comes to scrambling and keeping plays alive. Their wide receivers are just athletes. When you have that many athletes, that’s how they win.”