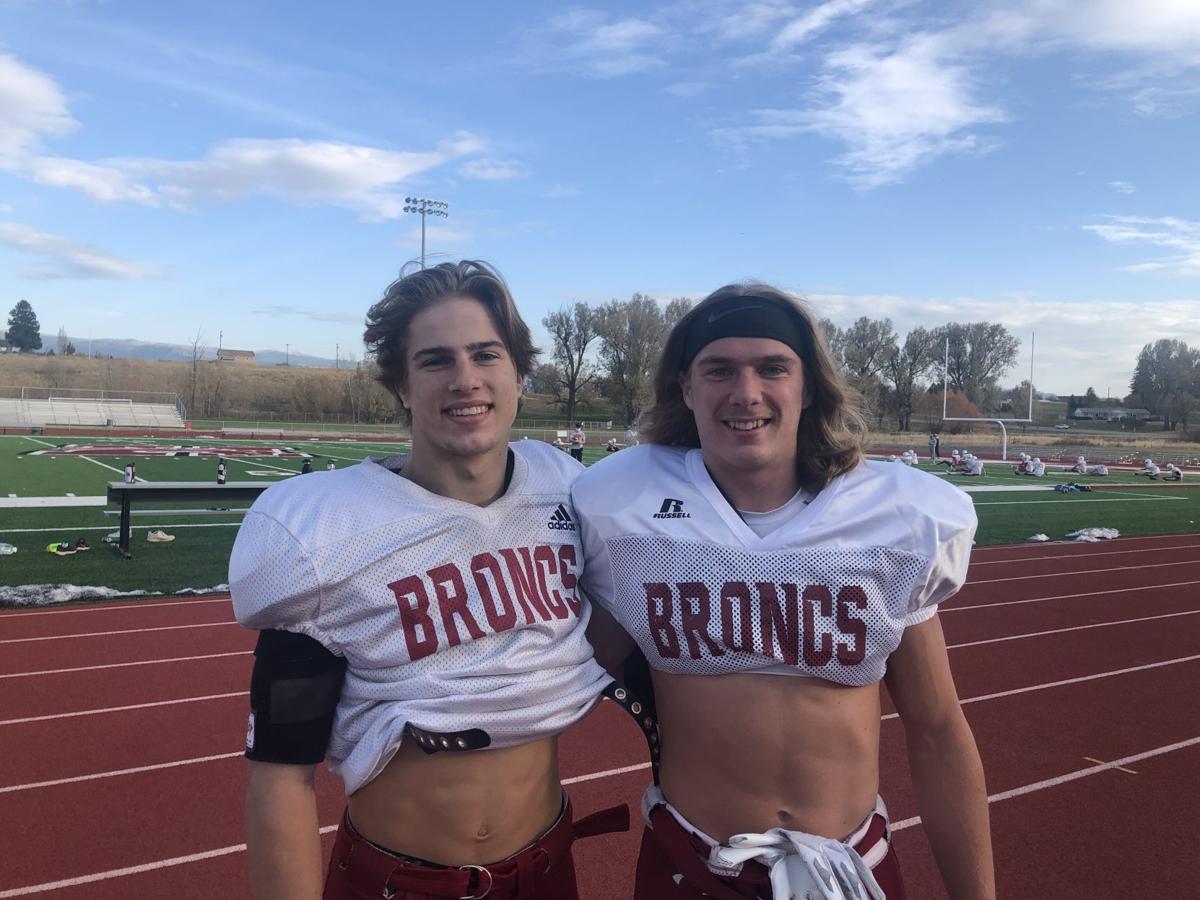 Hamilton running backs Ben Rooney, left, and Ben Tack have been big-time contributors to the semifinal-bound Broncs after transferring in this year. 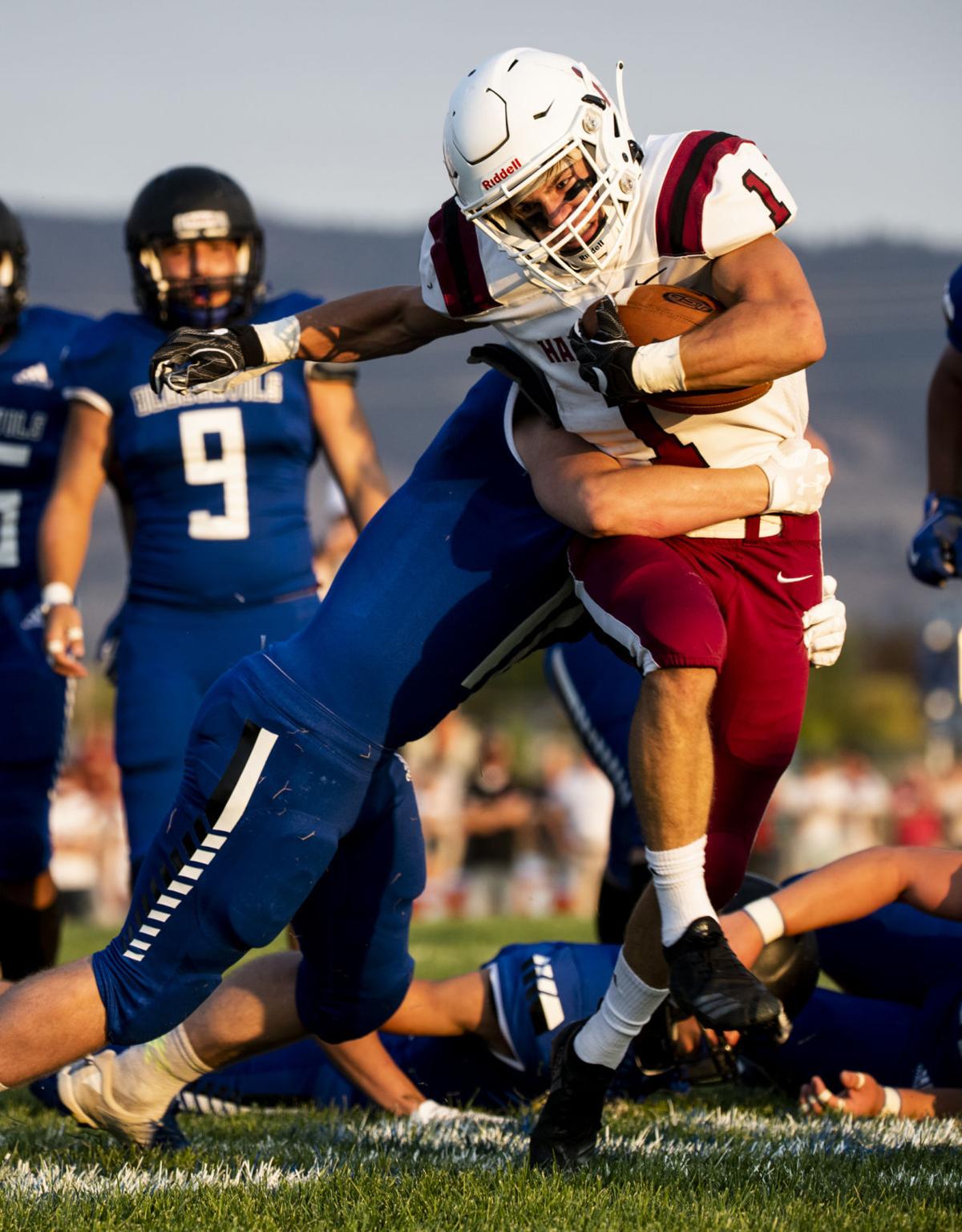 Hamilton’s Ben Rooney runs the ball against Corvallis in the Broncs' season opener.

Hamilton running backs Ben Rooney, left, and Ben Tack have been big-time contributors to the semifinal-bound Broncs after transferring in this year.

Hamilton’s Ben Rooney runs the ball against Corvallis in the Broncs' season opener.

HAMILTON — Ben Rooney and Ben Tack share many things in common beyond just having the same first name.

They’re seniors at Hamilton, they play running back and they’re almost identical in their height and weight. They also both transferred to the Broncs this season, and perhaps that’s the biggest difference: Tack came from right in the Bitterroot Valley at Stevensville while Rooney moved halfway across the country from Wisconsin.

The similarity that makes Hamilton the happiest is their individual success on the field parlaying into team success. Rooney and Tack are statistically two of the top three rushers in Class A this season, helping the new-look Broncs find similar success by reaching the State A semifinals for the fourth season in a row.

“It’s kind of funny because they’re kind of the same person, just in two people,” said Hamilton coach Bryce Carver, who refers to the two Bens as “Ben-squared.”

Rooney, whose medium-length hair and stubble on his chin is countered by Tack’s shoulder-length hair and wispy mustache, knew of Montana because his brother was going to school at Montana State. His family had looked at different states that were allowing fall sports during the pandemic, and they chose Montana, settling on a Class A school so he could attend in-person classes.

“It was between here and Dillon, and I messaged both the schools, and coach Carver responded right away, and I’m like, ‘All right, let’s go visit Hamilton,’” Rooney recalled. “I came out, hung out with a couple of the guys, met the coaches and just decided that I wasn’t sure if we’re going to play back home and I can’t miss it, so I’m like, ‘We’re coming here.’”

Tack has known about the Broncs for years because he played for conference foe Stevensville while his father, Troy Tack, was the head coach of the Yellowjackets through the 2018 season. His father left coaching after the 2019 season, but Tack said he was looking to transfer for his final year before that happened.

“I thought if I came here that I’d have a better chance of more playing time, better team, better O-line to run behind,” Tack said. “It was just a great opportunity to come out and play for these guys, and I just have been having a fun time.”

It’s indeed been a fun time for them and the Broncs, who are 10-0 heading into their semifinal game against Laurel at noon Saturday at home. Rooney has rushed for 802 yards and Tack for 656 yards, ranking second and third in Class A and 11th and 18th in the state regardless of classification, according to stats submitted on MaxPreps.

They’ve done that damage with Rooney standing at 5-foot-9 and 165 pounds and Tack checking in at 5-8, 170. They’re not the beauty-and-beast duo of a small speedster and a big bruiser, but they keep each other fresh and playing at a high level because of their ability to seamlessly sub for one another.

“We’re both really elusive,” Tack said. “We have a lot of great moves out there. We can put a juke on anyone we want to.”

“Yeah, I think I’ve gotten better at that this year,” Rooney followed. “But I think he’s a little better at cutting and making guys miss.”

“Yeah, that’s my thing is I like to run through people,” Rooney responded, “but I’ve been working on being able to cut more and make guys miss.”

The experiment of using two running backs isn’t something Carver has used in the past as the head coach or offensive coordinator. The Broncs have instead gone with a featured back and ended up with a 1,000-yard rusher for six seasons in a row.

Carver couldn’t settle on one player during fall camp because they each looked the part, so he went with the two-headed attack. It didn’t matter to him that Tack was Stevensville’s starting running back last year while Rooney was a third-stringer at Regis High School in Eau Claire, Wisconsin, and didn’t join the team until two weeks into fall camp.

“I think it’s just because they’re both athletes,” Carver said of them hitting the ground running. “They’re guys who came in and wanted to be coached hard, wanted to win and wanted to compete at a high level. When that’s your goal and you have that team goal, you’re able to buy in and do what it takes to win.”

The team has bought in around them. Their addition has eased the transition to all-state wide receiver-turned-quarterback Tyson Rostad. He’s not forced to chuck the ball to all-state wideout Jaiden Klemundt and not asked to run as much because Carver is confident in handing off the ball to his backfield of Bens, who are bolstered by an offensive line with four returning starters.

Rooney and Tack have split time by rotating about every three carries, even if one does the heavy lifting on the drive and the other gets the touchdown. Tack is sitting at 109 carries and 12 rushing scores, while Rooney is at 106 and eight. Even with the alternations, they’ve fumbled the ball just once in 215 carries.

“It turns out fairly even with him getting the big run and me scoring or vice versa,” Rooney said

“We're just happy for each other to score and get those big points,” Tack said.

They’re also hitting their stride at the right time. Rooney is coming off his best performance of the year in the quarterfinals, rushing for a season-high 155 yards, his third 100-yard game, and getting a game-sealing interception on defense. Tack had both of his 100-yard outings in the final two games of the regular season, going for 147 and 122 yards.

“I think they’ve been such great teammates that the team has just fought around them,” Carver said. “Everyone knows we needed them to be successful, and we’ve just bought into having them here. They’re family now.”

Sentinel will open the State AA playoffs in the quarterfinals after earning a bye last week by winning the Western AA title with a 7-0 regular-season record. The Spartans have outscored their opponents 344-33 and will now begin their quest to make the state title game for the first time since 1984 and win their first championship since 1972.

Up first is Great Falls, which is riding a three-game winning streak after a 1-3 start and is coming off a 28-0 win over Billings Skyview in the opening round.

The teams kick off at 7 p.m. Friday at Missoula County Public Stadium.

Glacier’s reward for putting a 63-0 hurting on Missoula Big Sky last week is a trip to Billings Senior for the State AA quarterfinals. The Wolfpack, whose loses came to the Western AA No. 1 and No. 2 seeds, re-found their offensive footing behind quarterback JT Allen and running back Jake Rendina, and they’ll need them to come up big to make the semifinals.

Senior is coming off a first-round bye, is on a three-game winning streak and has lost just once, falling to undefeated Billings West, the Eastern AA top seed, 41-14.

The teams will play at 1 p.m. Saturday at Wendy’s Field at Daylis Stadium.

Hamilton is back in the State A semifinals for the fourth straight year as the Broncs chase the state title that’s eluded them since they went back to back in 1997 and 1998. They’ve shown an ability to win offensive shootouts and defensive struggles as they’re coming off a 24-6 win over Sidney in the State A quarterfinals.

Laurel, which scored a 35-13 win over Frenchtown last week, has only lost to undefeated Billings Central, the Eastern A top seed, after finishing as the state runner-up last year. The Locomotives are led by quarterback and Montana State commit Eli Aby, who can hand off the ball to capable runners or throw to Jack Waddell, who Carver said is possibly the best receiver he’s seen in Class A this year.

Kickoff is set for noon Saturday in Hamilton.

Florence will want to avoid getting off to a slow start again this week when it hosts Townsend in the State B quarterfinals. The Falcons were able to shake off the rust of quarantine to open the playoffs with a 27-8 win over Conrad but meet a more sturdy opponent this week.

Up next is Townsend, which blasted Huntley Project 42-14 in the first round. The Bulldogs have won seven of their past eight games, losing only to undefeated Manhattan, the No. 1 team in the state and the only team to top the Falcons.

The teams will kick off at 1 p.m. Saturday in Florence.

Drummond-Philipsburg (Flint Creek) will try to extend its season and Mike Cutler’s coaching career at least one more game when it hosts Fairview in an 8-Man quarterfinal game. The Titans, fresh off a 60-14 win over Belt in the opening round, are led by quarterback and Montana State commit Kade Cutler but have shown an ability to win on the legs of running back Preston Metesh.

Flint Creek’s next challenger is Fairview, which is coming off a 44-6 win over Ennis to open the playoffs. The Warriors’ lone loss came to Scobey, which won the Eastern C 8-Man, on Sept. 25.

The game will kick off at 1 p.m. Saturday in Philipsburg.

Thompson Falls takes its potent rushing attack on the road for an 8-Man quarterfinal game at Scobey. The undefeated Blue Hawks, who are coming off a 50-6 win over Simms, have the state’s top two rushers in 8-Man, with Kade Pardee running for 863 yards and Roman Sparks going for 779 yards, according to MaxPreps. Both have 18 rushing touchdowns.

Thompson Falls will have to try to solve a Scobey squad that shut out Cascade 50-0 in the opening round of the playoffs. The Spartans haven’t lost since their opener, when they fell to Westby/Grenora 28-22.

The game is set for 1 p.m. Saturday in Scobey.