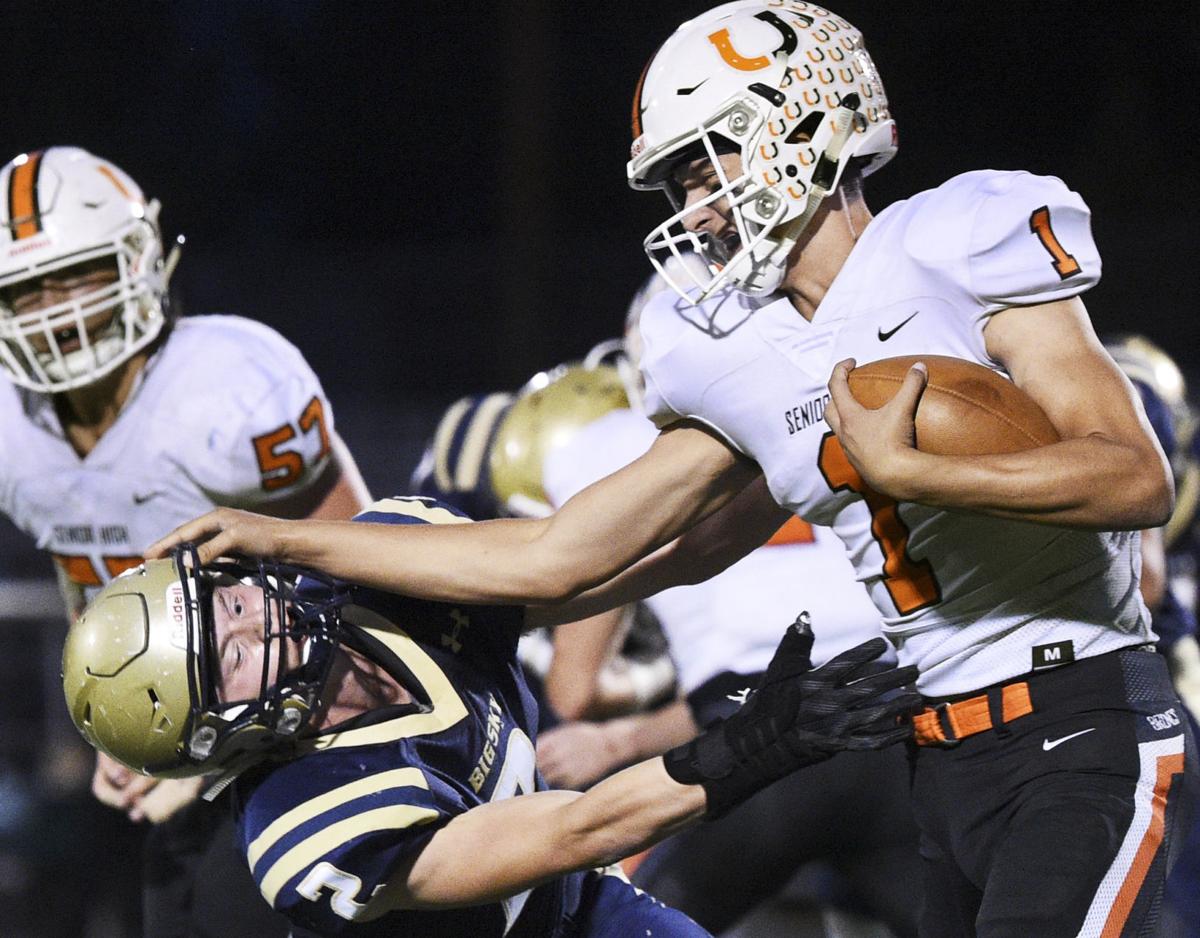 Missoula Big Sky wide receiver Jett Rebish (2) is wrapped up by Billings Senior defensive lineman Gunner Hegg (27) near the line of scrimmage in the first quarter of Friday's game. 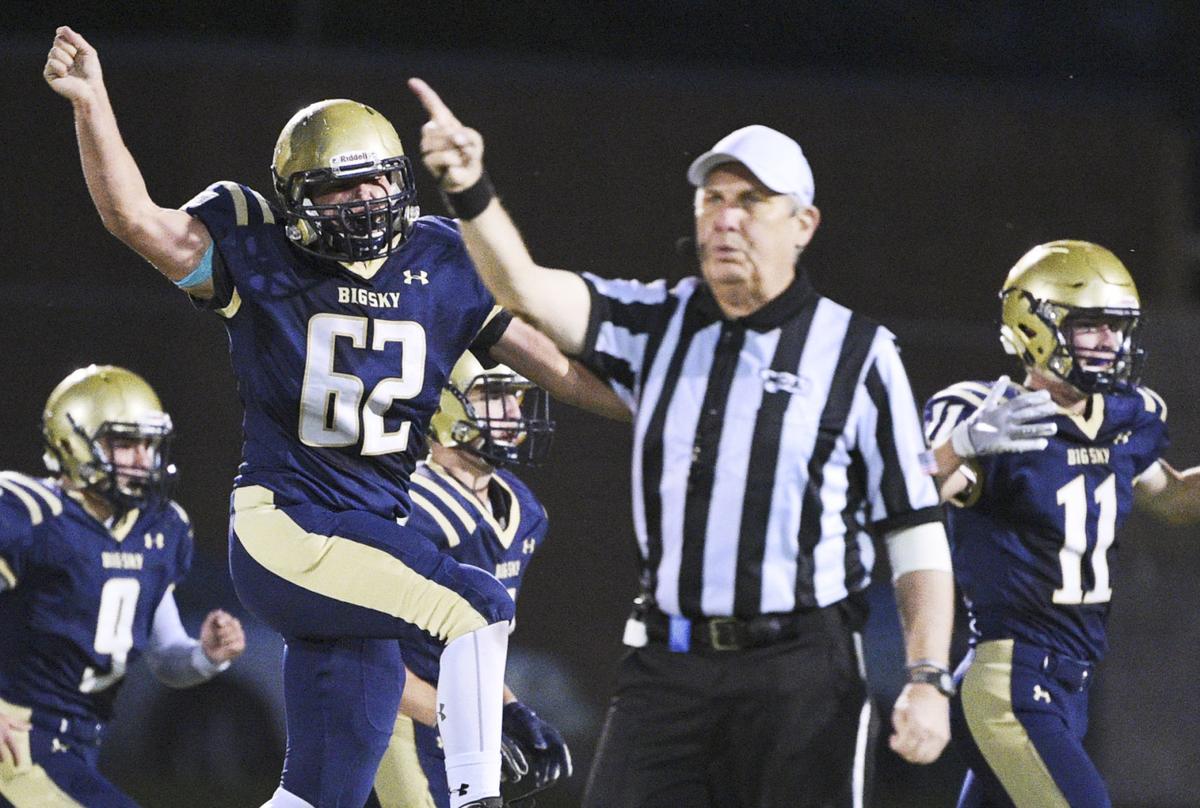 Missoula Big Sky defensive lineman Max Andres (62) and the rest of the defense celebrate after Andres recovers a fumble for the third turn over in a row for Billings Senior. 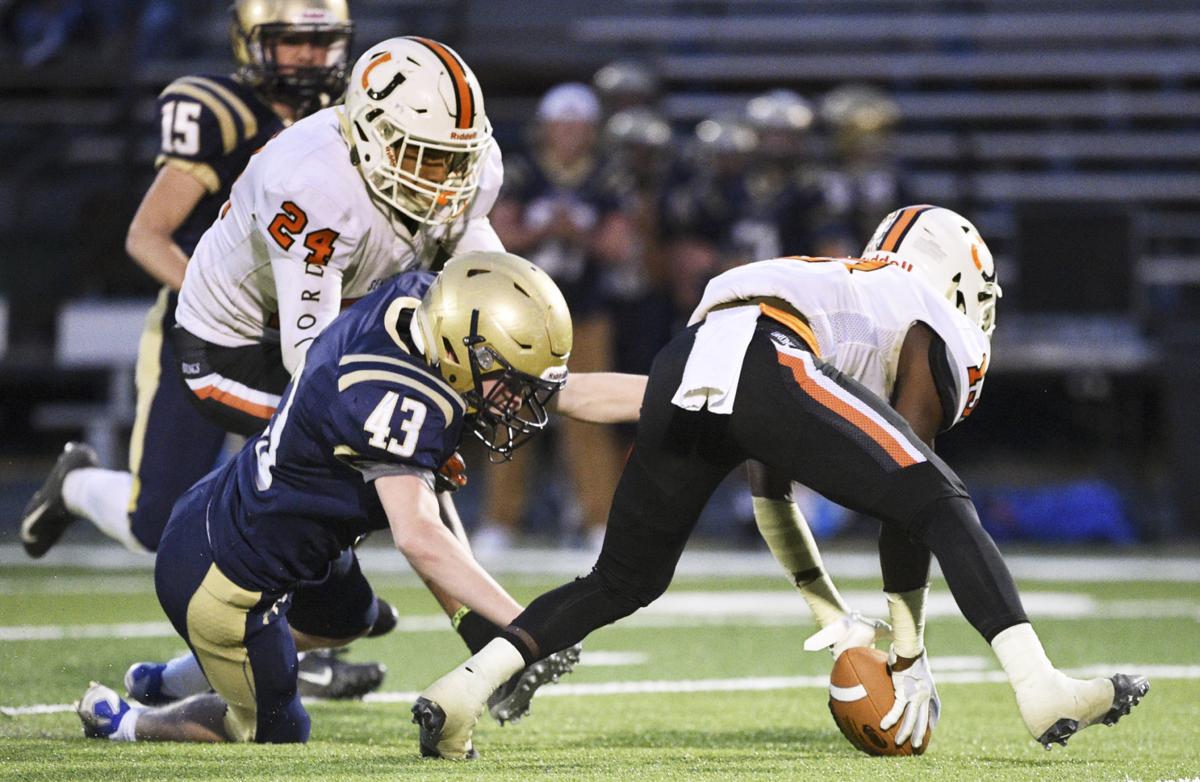 Missoula Big Sky wide receiver Jett Rebish (2) is wrapped up by Billings Senior defensive lineman Gunner Hegg (27) near the line of scrimmage in the first quarter of Friday's game.

Missoula Big Sky defensive lineman Max Andres (62) and the rest of the defense celebrate after Andres recovers a fumble for the third turn over in a row for Billings Senior.

Bergen effectively shut down the Big Sky football team's passing attack for three quarters with three interceptions. He then scored the game-winning touchdown in an overtime thriller, 35-28, on Friday night at Missoula County Stadium.

Turnovers for both teams marred the first half.

Senior coughed up two fumbles and threw an interception in the opening half to quickly find itself in a 14-7 hole, courtesy of two Colter Janacaro touchdown runs.

Big Sky returned the favor by throwing two interceptions of their own. The latter proved to be fatal, giving the Broncs new life with 44 seconds remaining in the half.

Ball security would get no easier for Eagles.

On Big Sky’s opening possession of the second half, Bergen picked off his third pass of the night. Gunner Hegg threw salt in the wound, finding pay dirt with a four yard run up the middle, five plays later for the Broncs to even the score at 14 apiece.

Hegg added onto his terrific night on the ground, two possessions later with a punishing four-yard touchdown run, to put the Broncs up 28-14.

Janacaro continued his dominance on the ground the next possession when he scored his third touchdown of the night to even the game at 28-28.

Each team got a possession to win the game in regulation, but both drives stalled to send the game to overtime.

Plasterer found Bergen on a 10-yard out route to put the pressure on the Eagles.

After two runs of little to no gain, Gardanier seemed to find Ben Maehl deep in the end zone but the pass was ruled incomplete to bring on fourth down. A last ditch pass attempt to Janacaro was quickly sniffed out by the Senior defense to fall incomplete to end the game.

"I really hope we tackle him before the end zone, that’s really all that was going through my mind,” said Senior’s Garrison Poetzl. “I just tried to read play, get my eyes up and get to the ball as quickly as I could.”

Bergen finished the game with 54 yards on his three reception returns and four receptions for 33 yards and a touchdown.

His cousin, Oran Nash-Bergen, led the Broncs with 104 yards on eight receptions.

Janacaro led the Eagles’ offense with 25 carries for 114 yards and three touchdowns.

Senior moved to 4-2 with the win. The Broncs play against Butte High next Friday at 4 p.m. in Billings.

Big Sky dropped to 2-4. The Eagles head to Kalispell for a mush win game against Flathead next Friday at 7 p.m.

Missed any of the action? Catch up with all our coverage of statewide high school football Sept. 27-29, 2018.