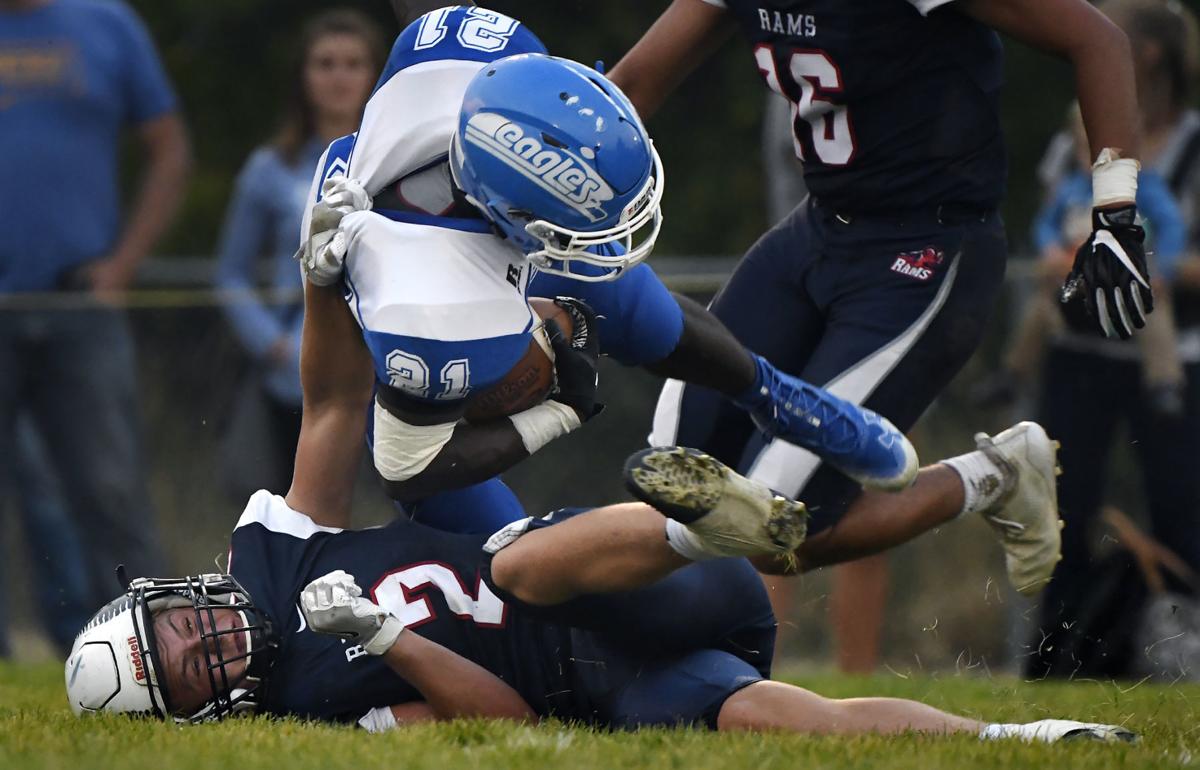 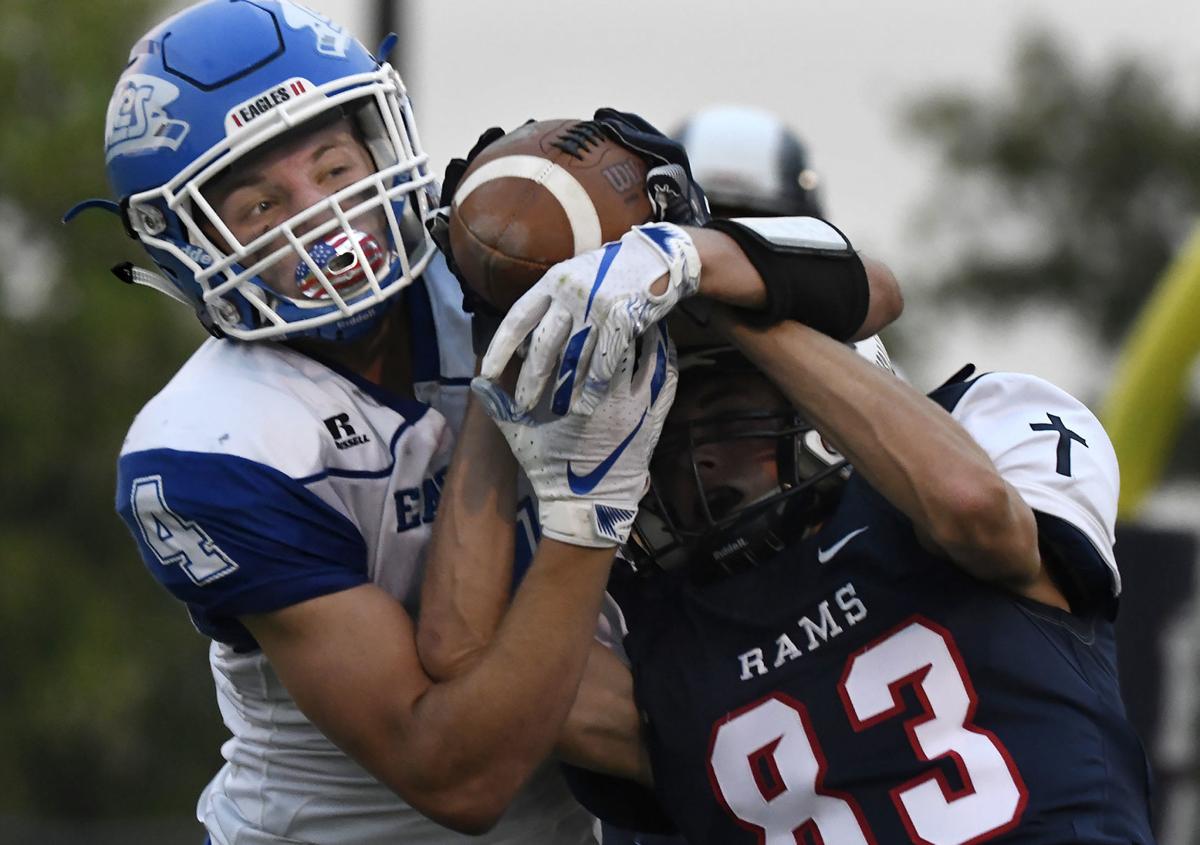 Fairfield's Keeley Bake, left, and Loyola's Austin Ogilvie fight for the ball in the end zone. Bake came up with the catch for a touchdown in the second quarter. 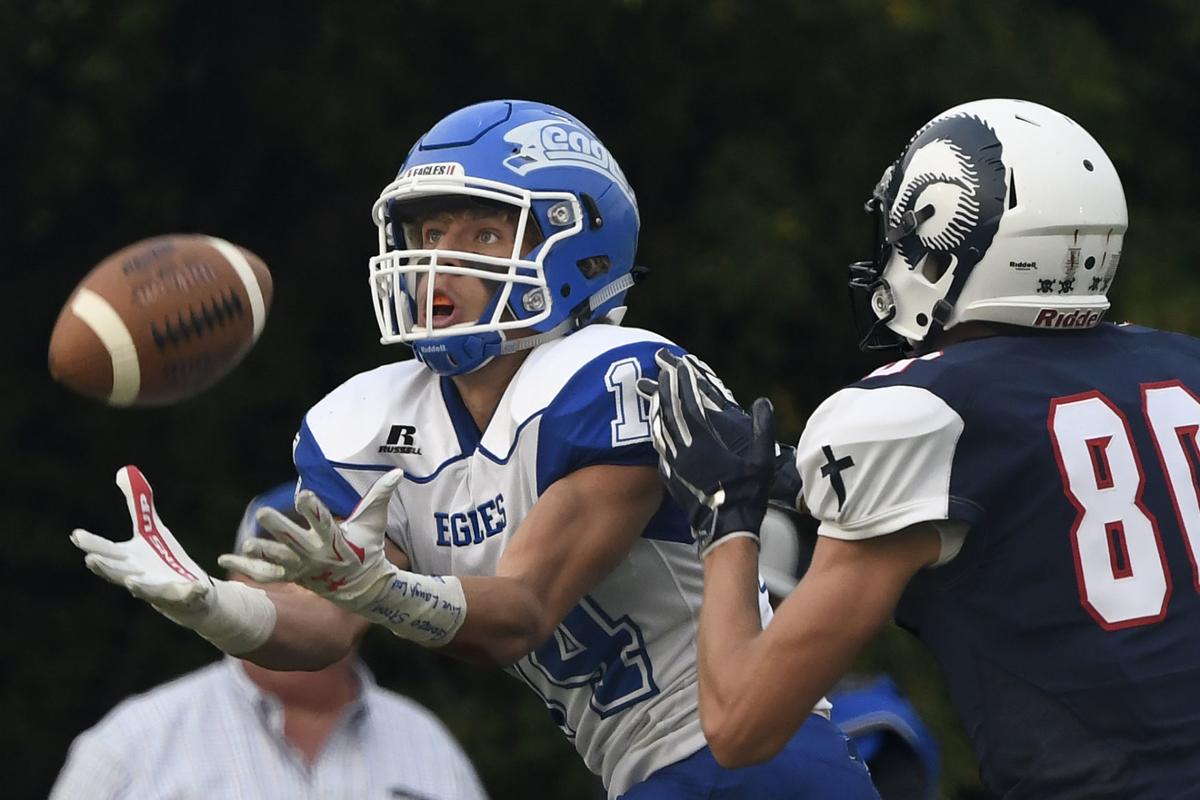 Fairfield's Dawson Allen eyes the ball before making a catch as Loyola's Cooper Waters (80) looks on. Allen scored Fairfield's first touchdown of the game on the play. 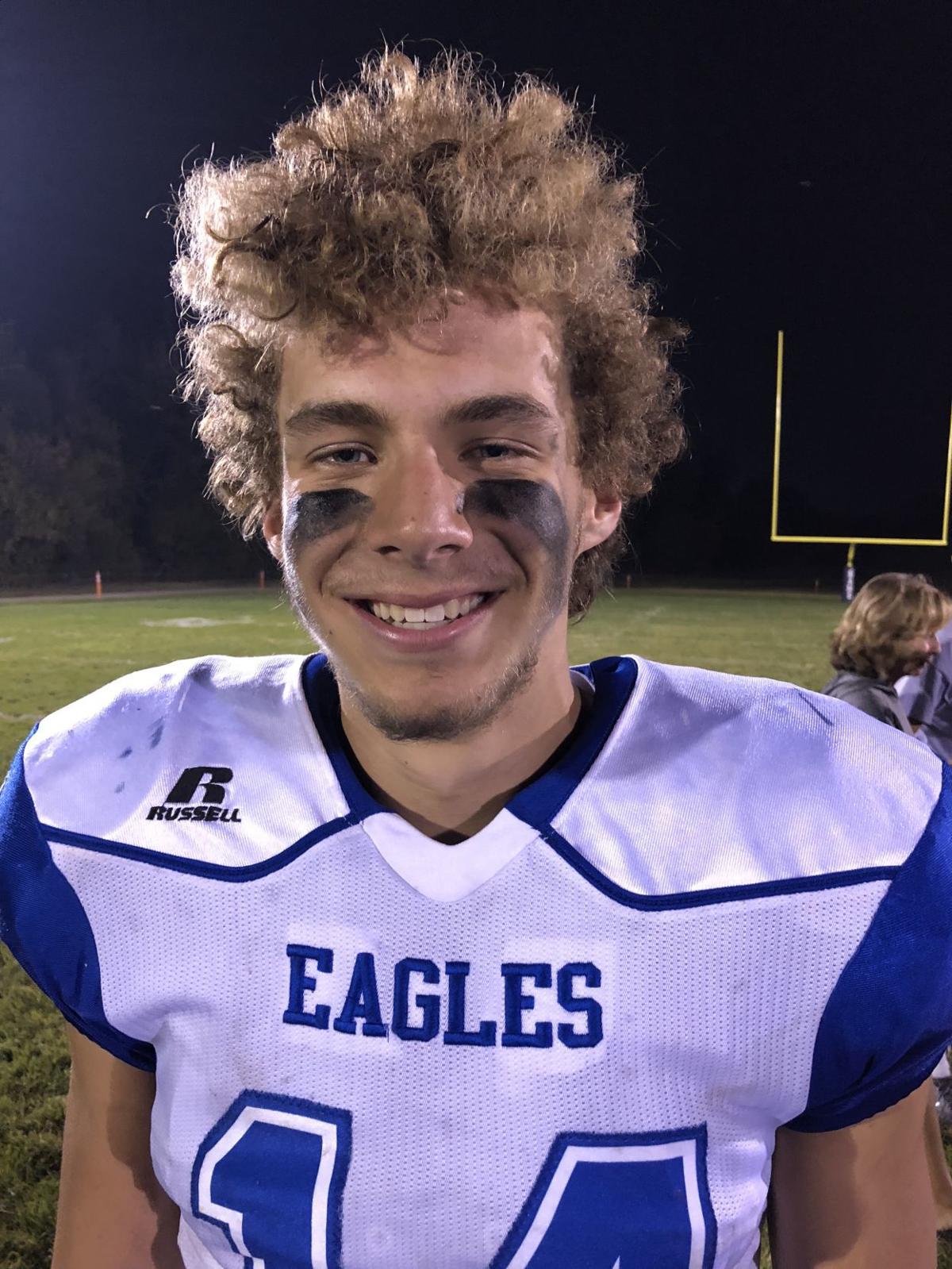 Fairfield's Keeley Bake, left, and Loyola's Austin Ogilvie fight for the ball in the end zone. Bake came up with the catch for a touchdown in the second quarter.

Fairfield's Dawson Allen eyes the ball before making a catch as Loyola's Cooper Waters (80) looks on. Allen scored Fairfield's first touchdown of the game on the play.

MISSOULA — Fairfield senior Dawson Allen was determined to make sure the Eagles’ trip to the Garden City didn’t end like their last one, when they lost to Loyola Sacred Heart in the 2016 state semifinals.

Allen made his five touches count in a meaningful way on Friday as No. 5 Fairfield used big play after big play to spoil No. 3 Loyola’s home opener with a 38-6 victory at Rollin Field.

“This win means everything because two years ago we lost to them here,” Allen said. “It feels good to beat them. I was thinking that I had to give it my all and show them that we’re a better team than two years ago.”

Allen had a kickoff return for a touchdown, a receiving touchdown, two interceptions and a fourth-down conversion.

His 80-yard kickoff return to open the second half quieted the raucous crowd that got going after Loyola scored in the final minute of the first half to pull within 20-6 and sacked Fairfield quarterback Ryder Meyer on the last play of the half.

“We come out there ready to go, and that happened, and it was a dagger,” Loyola head coach Todd Hughes said. “You could just see the air go out of them.”

Allen started the scoring when he grabbed a deep heave from quarterback Ryder Meyer and won a footrace to the end zone for a 79-yard touchdown on third down of the Eagles’ opening drive.

“We were on our heels the rest of the night,” Hughes said.

Meyer, a Griz football commit, finished 7 of 15 for 144 yards and three touchdowns. He also connected with Derek Simmons for a 7-yard touchdown that put Fairfield up 14-0 and with Keeley Bake for a 24-yard touchdown on third-and-goal, which Bake wrestled away from a defender to make the advantage 20-0.

.@keeley_bake takes away a near interception for a TD. @rydermeyer2 with the 24-yard TD pass on third and goal. 2-pt failed. Fairfield up 20-0 on Loyola. 5:04 left in 2Q. #mtscores pic.twitter.com/KbczIhJ3XY

“Gritty performance by Ryder and Dawson,” Fairfield head coach Les Meyer said. “When things got stuffed, Ryder came out of it and got us a first down. Our line play was huge in that. I thought we grew up today being able to block and sustain blocks.”

Loyola’s offense struggled to move the ball throughout the game. Starting quarterback Nick Mitzell was 4 of 10 for 47 yards, and the only ball he threw that was caught in the second half was an interception by Allen, which Fairfield turned into six points to go up 32-6.

Backup quarterback Blake Danielson was intercepted three times. Two of those came in the first half, leading to eight points for Fairfield. The third one was by Allen, allowing Fairfield to take a knee and run out the clock.

Rams running back Ryan Tirrell, a Griz football commit, was limited to 57 rushing yards on 17 carries. He spent a good portion of the fourth quarter on the sideline with ice on a knee after taking a helmet to the thigh, Hughes said.

Senior wide receiver Cooper Waters caught five passes for 49 yards and a touchdown that got Loyola within 26-6 with 32.4 seconds left in the first half. However, he didn’t catch a pass in the second half.

Les Meyer and Allen both referenced the smoke and heat as something through which all players had to fight.

“In terms of the heat, I though both teams had adversity, especially in the second quarter,” Meyer said. “We had some of our guys step up and make plays. The score is not indicative. That’s a tight ball game. We were fortunate to have some big plays. If we don’t have those, the complexion of the game changes. We were proud of the guys in the third quarter.”

Missed any of the action? Catch up with all our coverage of statewide high school football Sept. 6-8, 2018.