BILLINGS — There will be a limited number of spectators in Billings stands cheering on the home team at high school athletic competitions after all this fall.

Two family members per participant for the Billings teams will be allowed. Out-of-town fans will not be admitted. The spectator policy is effective immediately said BPS director of activities and athletics Mark Wahl.

West football coach Rob Stanton said the Golden Bears were happy with the announcement on Friday and said it was "important to have the parents there."

West volleyball coach Monica Grimsrud said her players had been speculating about what the decision would be. She was also happy about the developments.

"Volleyball is such an energy sport and the girls feed off having a crowd there and that support," she said. "It will be really nice to have that aspect back."

Grimsrud said her players were happy to hear about the new policy.

"It's huge for them, their parents are their biggest supporters from Day 1," she said. "To be able to have them there is pretty important."

Murdock, a parent of children in the eighth, sixth, fourth and second grades, said he treasures the times he gets to watch his kids perform.

"It means a lot for the parents. As a parent with four kids, I know how much I enjoy going to watch them compete," he said. "For the kids, all the way to when they are little, you watch them play when they are really little at the Y and they score a basket and they look at mom. And I don't think that goes away 100% because they are in high school."

There will not be an admission charge to enter the contests as long as “we remain in restrictive mode of family attendance only” according to the School District 2 guidelines.

But, even if fans weren't going to be allowed at events as originally proposed, Stanton said the Bears are just thankful to be practicing and preparing to play this fall. The 2020 spring high school season was canceled because of the virus and many college leagues have canceled competitions, or postponed games until the spring.

"We are thankful we are able to play," Stanton said. "We at times are struggling and wondering about what is going on with so many different aspects of the pandemic. But the bottom line is we are playing.

"Since a lot of these kids are also spring sports people and they lost that season I don't think they are taking it for granted. They just want to play, whether it's in front of 200 people or 2,000." 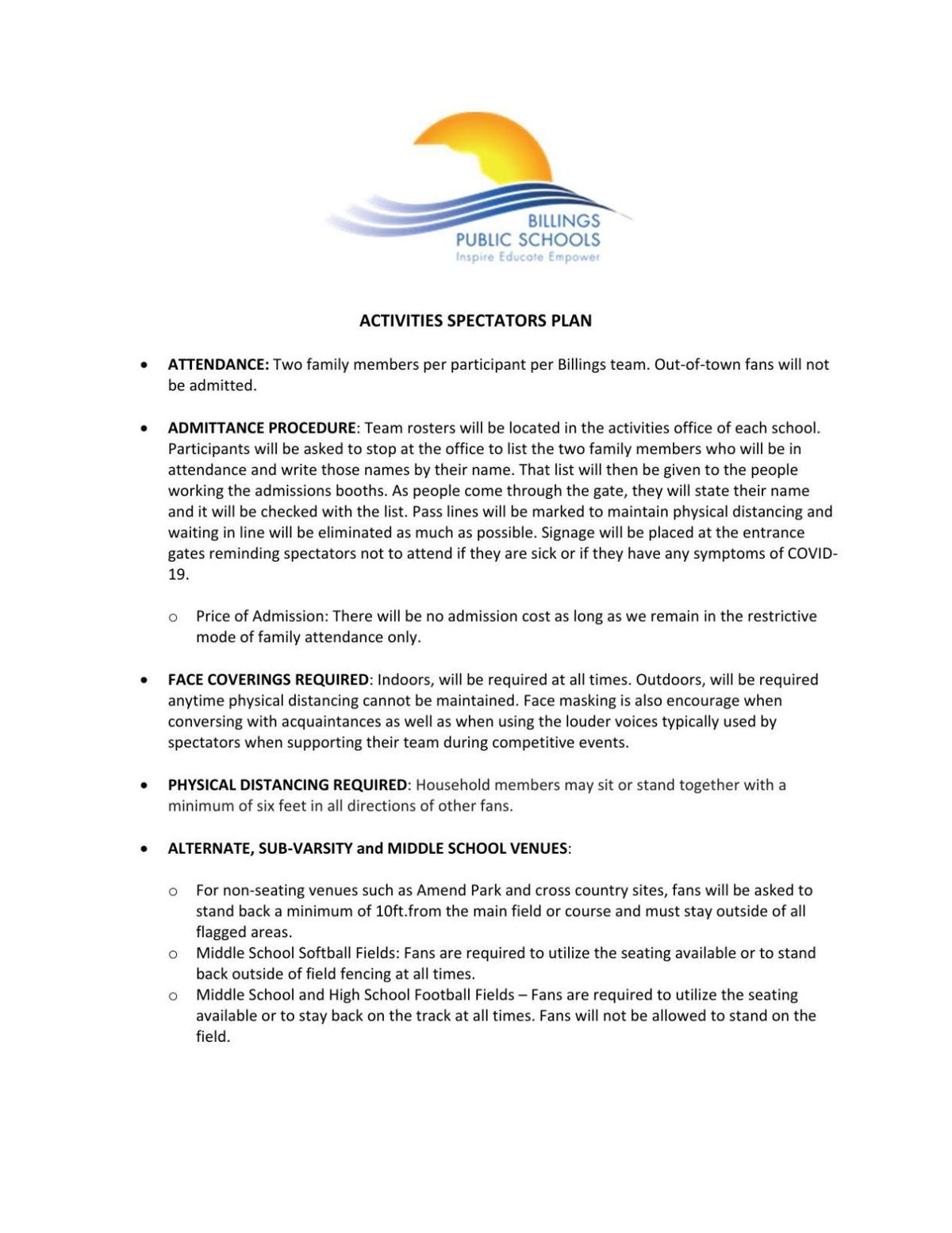 The plan released Friday is an effort to practice social distancing and help to limit the spread of COVID-19 — while also allowing two family members per participant per Billings team — due to the ongoing coronavirus crisis.

On Thursday it was announced during a press conference with Yellowstone County Health Officer John Felton that schools would be allowed to develop their own plans in regards to spectators at athletic events and other activities. The news broke before that on Wednesday when Huntley Project Schools announced its own plan for limited fans at school events.

Schools may develop their own plans for spectators at games, Yellowstone County health officer says

Since then, varsity soccer and golf events have been held in Billings. The first two home high school varsity volleyball matches of the year are scheduled for Friday, Sept. 11 as West and Skyview begin their seasons at home. The Senior volleyball team begins its season the following day at Great Falls CMR.

The AA football campaign kicks off next week with Senior playing the first game in Billings when it hosts Bozeman at Wendy’s Field at Daylis Stadium on Thursday, Sept. 10, at 7 p.m. Skyview and West will meet on Friday, Sept. 11 at 7 p.m. at Daylis.

"We are excited to compete and see where we stand going up against the defending champs," said Murdock.

Football teams were allowed to start practicing on Aug. 14. In a normal year, they would have begun playing Aug. 28. This season, however, all noncoference games were canceled because of the pandemic.

Stanton noted that when the Bears meet the Falcons it would normally be Week 3.

"It will be a special night next Friday when we open up AA football," he said.

"All the teams have been practicing since Aug. 14. We are proud of our kids hanging in there. ... We haven't played yet and I haven't heard one complaint. They are just practicing and waiting patiently. It will be fun for them next week."

The first varsity high school cross country meet in the Magic City will be Sept. 18 at 11 a.m. at Amend Park. The meet will be limited to the Eastern AA teams, which include the three SD2 schools, the two Bozeman schools, the two Great Falls schools and Belgrade.

According to the SD2 plan, team rosters will be located in the activities office of each school. Participants will be able to visit the office to write the names of two family members who will be in attendance next to their name on the roster. That list will then be given to the people working the admissions booths.

SD2 asks those coming to the events to state their name as they come through the gate. Lines will be marked to maintain physical distancing, and there will be an effort made to move the line of spectators through to avoid wait times.

If a spectator is sick or has any symptoms of COVID-19, SD2 asks that they stay home. Signage will be placed at the entrance gates reminding spectators of this policy.

Face masks will be required indoors at all times. Facial coverings will be mandated outdoors anytime physical distancing is not able to be maintained. The use of face masks will be encouraged when “conversing with acquaintances as well as when using the louder voices typically used by spectators when supporting their team during competitive events” according to the SD2 release.

The SD2 guidelines also say “household members may sit or stand together with a minimum of six feet in all directions of other fans.”

At this time, concessions will not be sold. However, in the guidelines it is noted that “if things go well and we are able to increase the number who can be in attendance, we may open concessions at some point during the season.”

During the events, announcements will be made reminding fans of the guidelines and their responsibility of following them.

Violators of the guidelines issued by SD2 “may be subject to a no trespass order for all SD2 events,” according to the SD2 release. Wahl said the school administration is responsible for enforcing the guidelines, which is the normal procedure for guidelines enforcement.

Games can be stopped

"Parents didn't just push it and just walk in and sit down (at the scrimmage)," Stanton said. "They respected the process. Some might not have agreed with it, but they wanted to make sure their kids got to play. That's what it is all about in the long run. And, they can watch the Hudl film."

Stanton said he believes that parents and other spectators will abide by the rules. He said the Bears' coaching staff, some of whom have sons playing sports, visits with the team about why the protocols are in place, and why it is important to follow the rules no matter whether you agree with them.

"I think the people who will show up, and the parents, understand that if they break the rules, just like we have seen in some areas of the country, the game will be stopped and it jeopardizes the play," Stanton said. "I think our parents will do a good job and follow the rules."

The Bears volleyball team will open the season on Friday, Sept. 11 at 5 p.m. vs. Bozeman at the Golden Dome. Grimsrud said the team plans on celebrating Senior Night prior to that match to honor the Bears' one senior, Taylor Graham.

The primary reason the Bears will move Senior Night festivities to the opening match was just in case there would be restrictions put on the season in response to the curve of COVID-19 cases.

"If something happens where we don't get to finish the season, that way we can still honor our senior," she said.

Stanton said that he is appreciative of those who “have the thankless job” of determining athletics policies during the ongoing pandemic as there are a percentage of people who will “disagree with it no matter what decision” is made. He also feels for the fans who won’t be allowed at the games, but is gracious for the opportunity provided for the athletes to perform.

“Unfortunately our community can’t be there and it stinks, but that’s just the way it is right now. … The bottom line is we get to play, so that’s cool,” he said.

Other points from the plan issued by SD2 include:

The Huntley Project School District is working on a plan to have “parents in the stands” for junior high and high school athletic events, according to a post on its Facebook page and school website Wednesday.