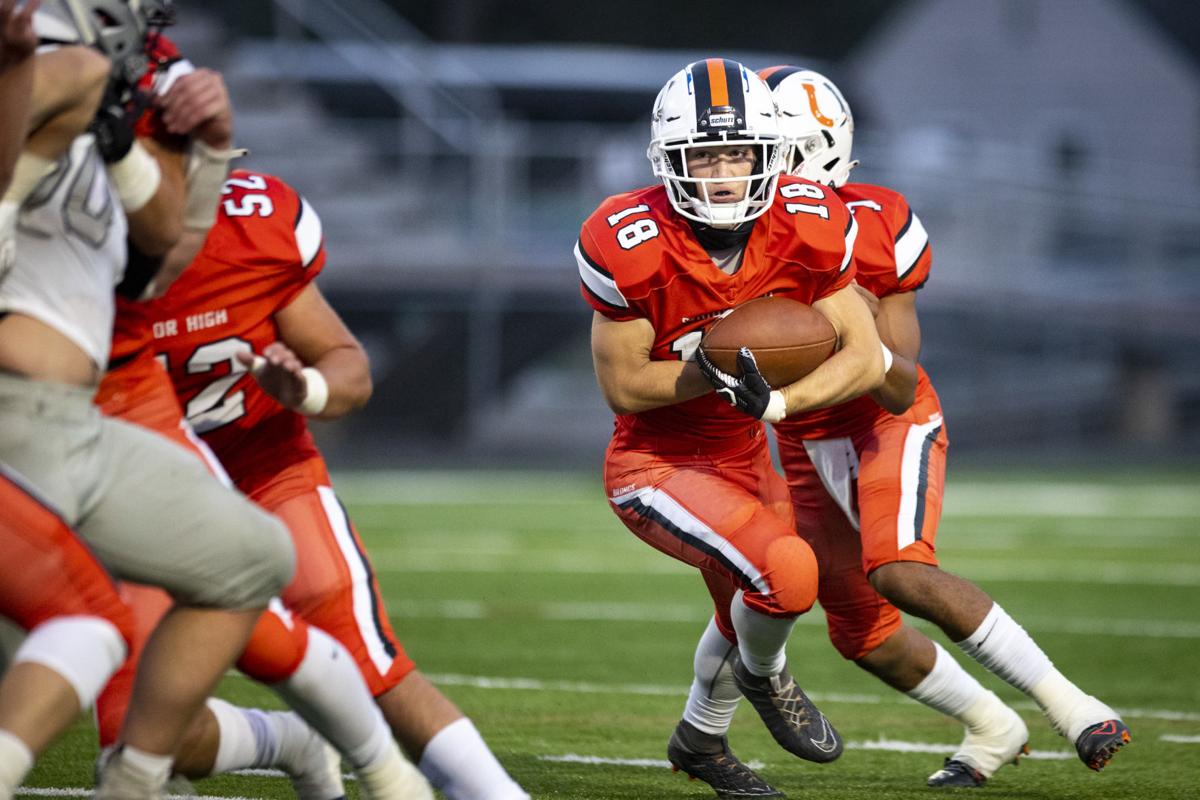 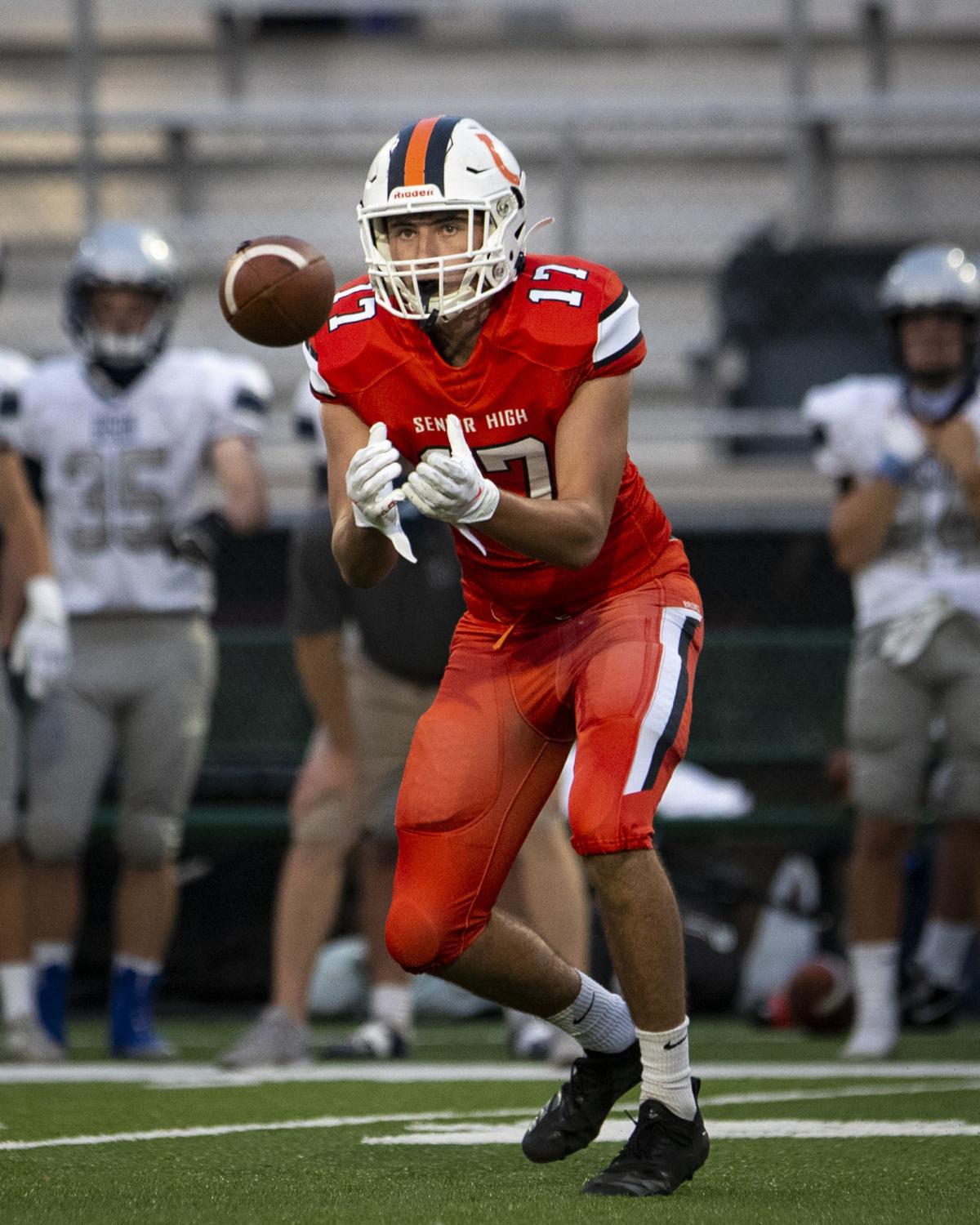 BILLINGS — By game’s end Billings Senior defensive lineman Caleb Romero had a couple spots of blood on his lower lip.

If it came from the figurative punch landed by the Great Falls Bison on the opening drive of Friday’s Eastern AA football game at Wendy’s Field at Daylis Stadium, Romero and the Broncs quickly countered.

Third-ranked Senior answered Great Falls’ touchdown drive with four of its own, and when it was over the Broncs went into homecoming festivities 28-14 victors.

Jacksen Burckley caught two touchdown passes and the Broncs rushed for 348 yards as an offense led by quarterback Junior Bergen caused a defense problems for the second straight week. The Broncs defeated Bozeman 34-13 last week, picking up more than 250 yards on the ground in the process.

Against the Bison, Bergen rushed for 148 yards and threw for 140 more, including touchdown throws to Burckley of 26 and 10 yards. Bergen also scored on touchdown runs of 3 and 18 yards for the Broncs (2-0).

All those scores came in the first half after Ryan Krahe’s 23-yard scamper finished off an 80-yard drive for the Bison (1-1) on the game’s first possession. But Senior led 28-7 at halftime.

“That team has speed that we don’t have,” Great Falls coach Mark Samson said. “It took us a half to figure it out. Some of it, I think our kids just stood around and kind of watched. Second half we finally started going.”

Still, the Broncs’ defense made it tough going for the Bison, who had an impressive 48-14 win over Bozeman Gallatin last week. Levi Torgerson had four touchdowns in that game — two pick-6s, including a 105-yarder, and a kickoff return among them — but the Broncs didn’t let him break big plays like he did against the Raptors.

Also a dangerous receiver, Torgerson was limited to 53 yards on eight catches. Bison quarterback Reed Harris, who had a long touchdown run in the fourth quarter nullified by a penalty, threw for 222 yards and a 68-yard touchdown to Bridger Polk in the third quarter. The Bison had a couple late drives fizzle out in Senior territory.

“We had a few ups and downs, but we did what we were trained to do, man,” said Romero, who also started on the Broncs’ offensive line. “We came out there, just rocked out, man. They only scored twice. I think that’s pretty good.”

Burckley has largely played second or third fiddle to Bergen, who caught 150 passes over the past two seasons, in the Broncs’ receiving corps. But with Bergen’s move to quarterback this season, Burckley and his 6-foot-5 frame has emerged as a primary target.

“Me and Junior just have that connection, I guess,” said Burckley, who caught six balls for 104 yards. “He knows he can throw it to me and I guess it just worked tonight.”

The Broncs continued to break out their ground game, too. Jacob Miller gained 145 yards — he rushed for 165 yards last week — and Bubba Bergen add 68 more. The Broncs had two drives thwarted by fumbles, however.

“It says a lot about the character of our team to turn the ball over the number of times that we did and still grind out a win,” Senior coach Chris Murdock said. “A lot of things we wanted to happen, happened. We definitely made some big plays.”

Nearly a dozen Bison players didn’t make the trip. Great Falls High has had up to 250 students quarantining due to coronavirus and tracing, though Samson said no football players have tested positive for COVID-19.

“This week we lost 12 to 15 kids — younger kids, not varsity kids, but mostly JV kids — but some of those younger kids though were backups to our special teams,” he said. “We did get two or three kids back for tonight but they hadn’t practiced in two weeks and a couple times it looked like it.

Photos from the Billings Senior Broncs' game against the Great Falls Bison at Wendy's Field at Daylis Stadium in Billings on Friday, Sept. 18, 2020.