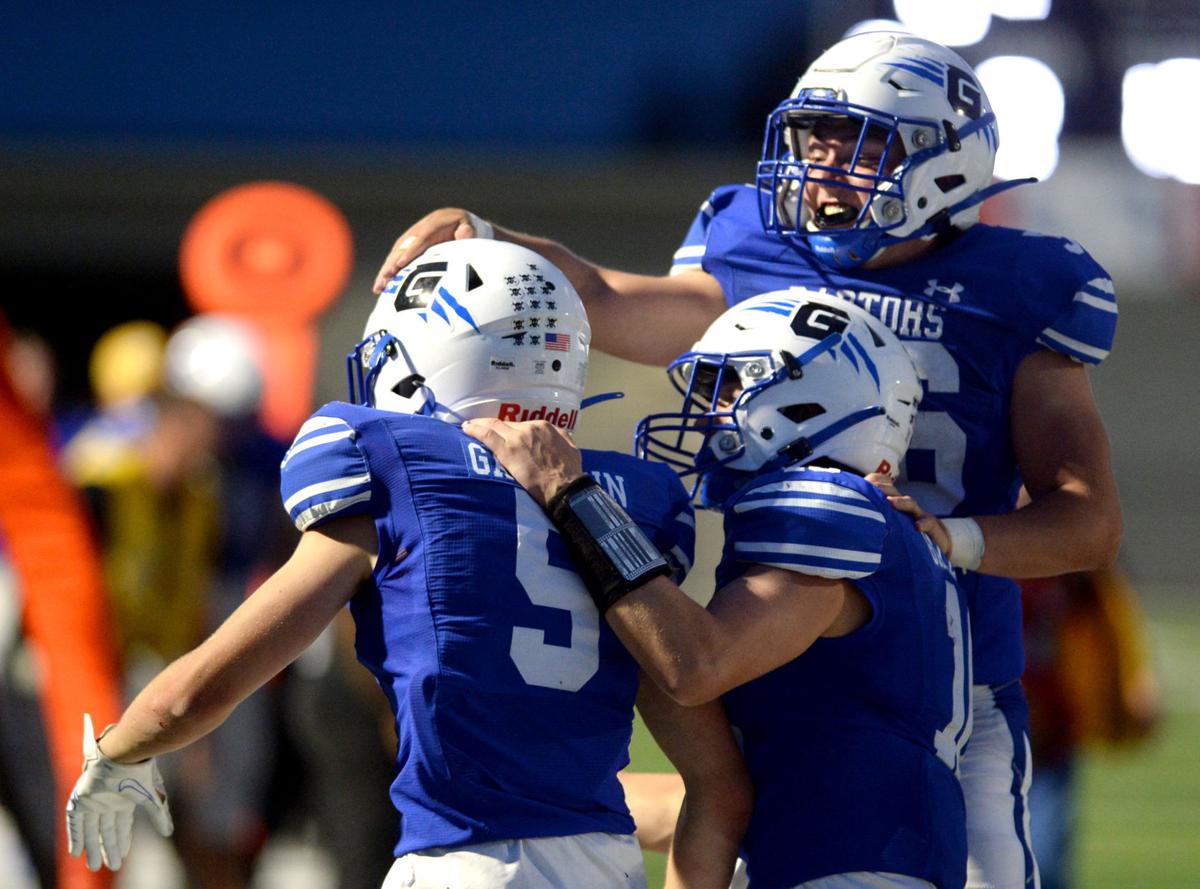 Gallatin’s Garret Coley and Carson Ely congratulate Tyler Nansel after a play in the first half of Friday’s game at Van Winkle Stadium. 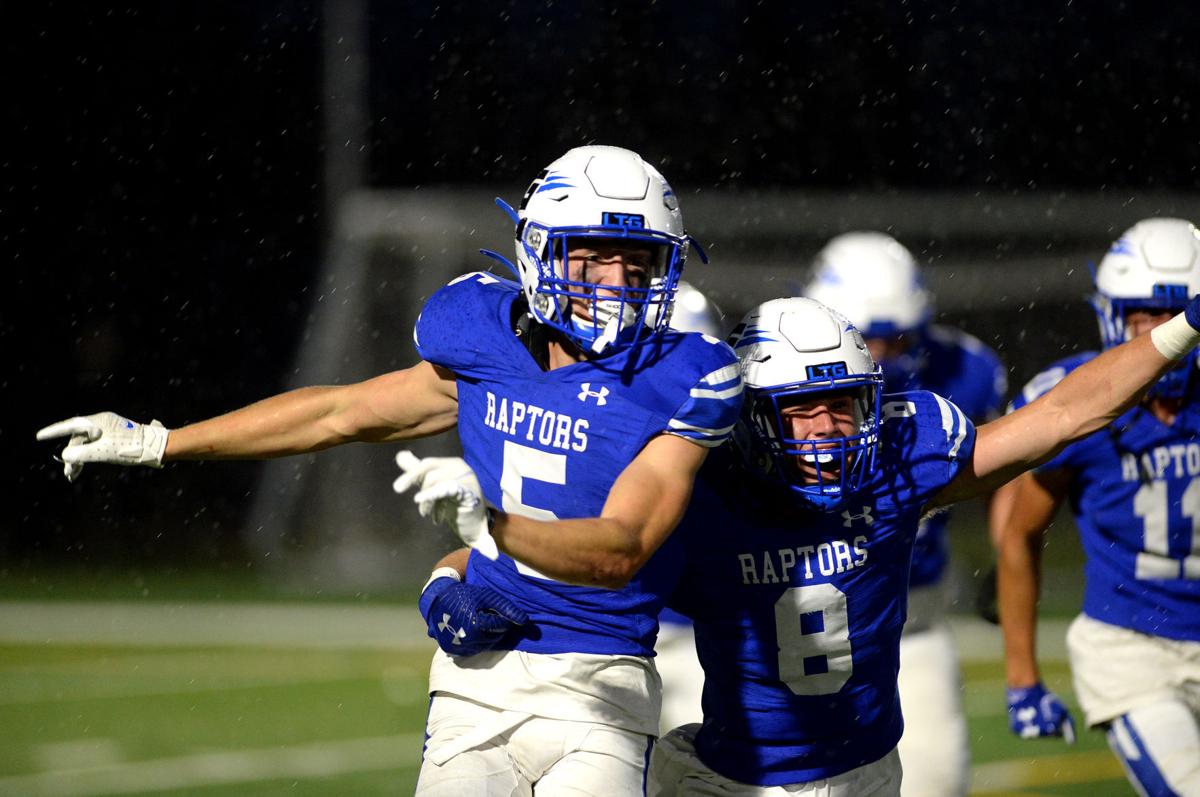 Gallatin's Evan Cherry, left, congratulates Tyler Nansel after an interception by Nansel in the first half of Friday's game at Van Winkle Stadium. 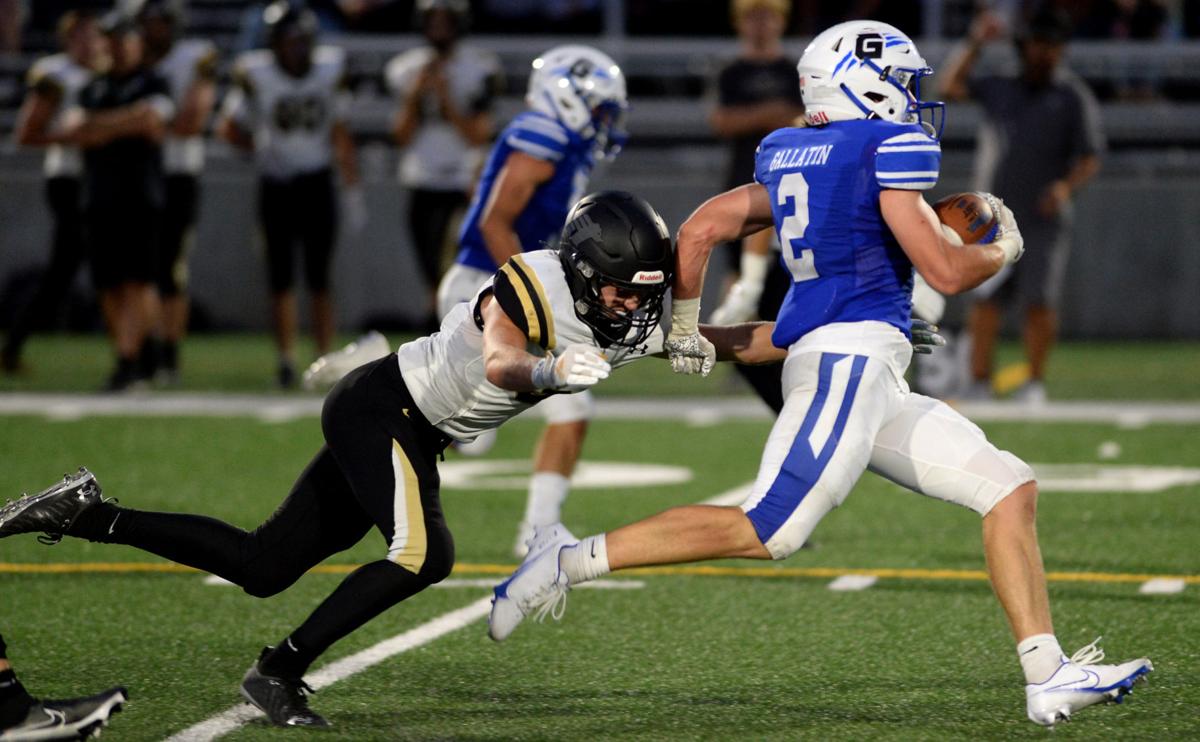 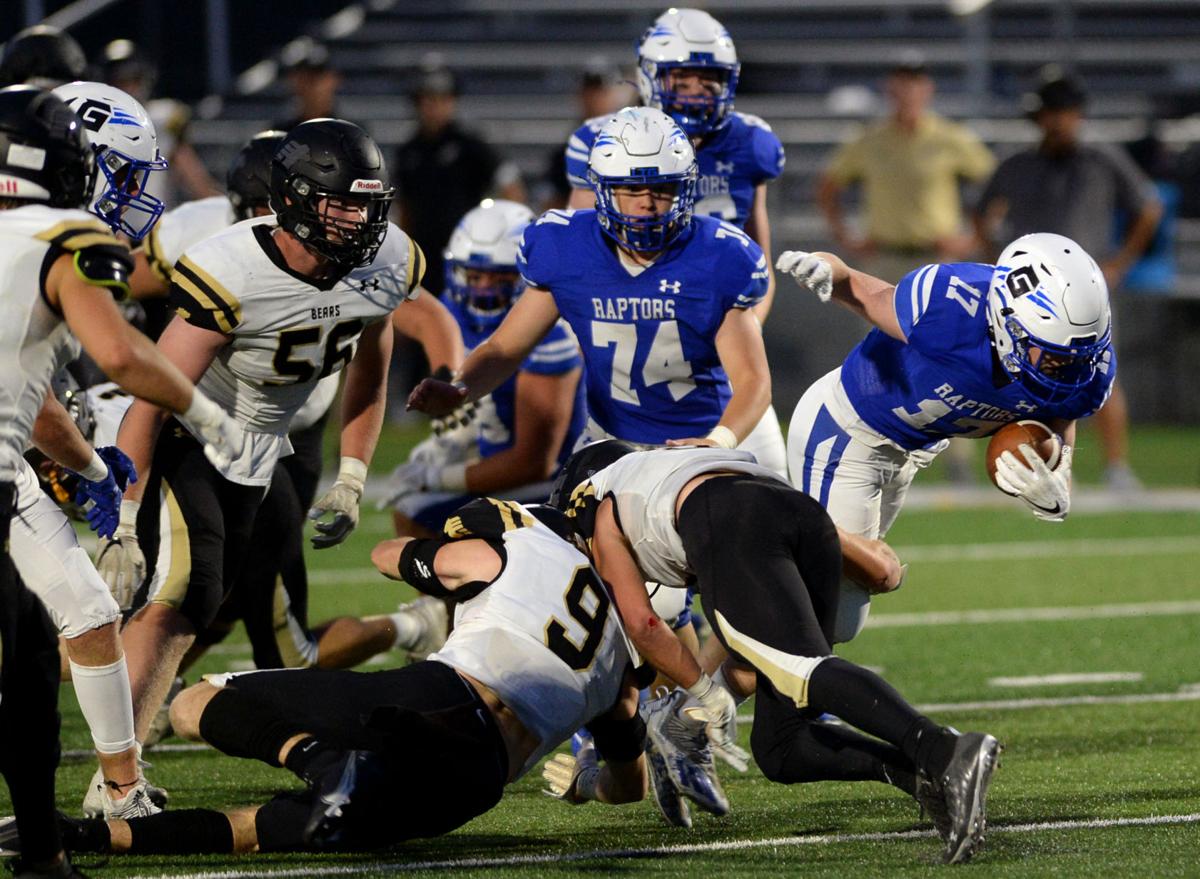 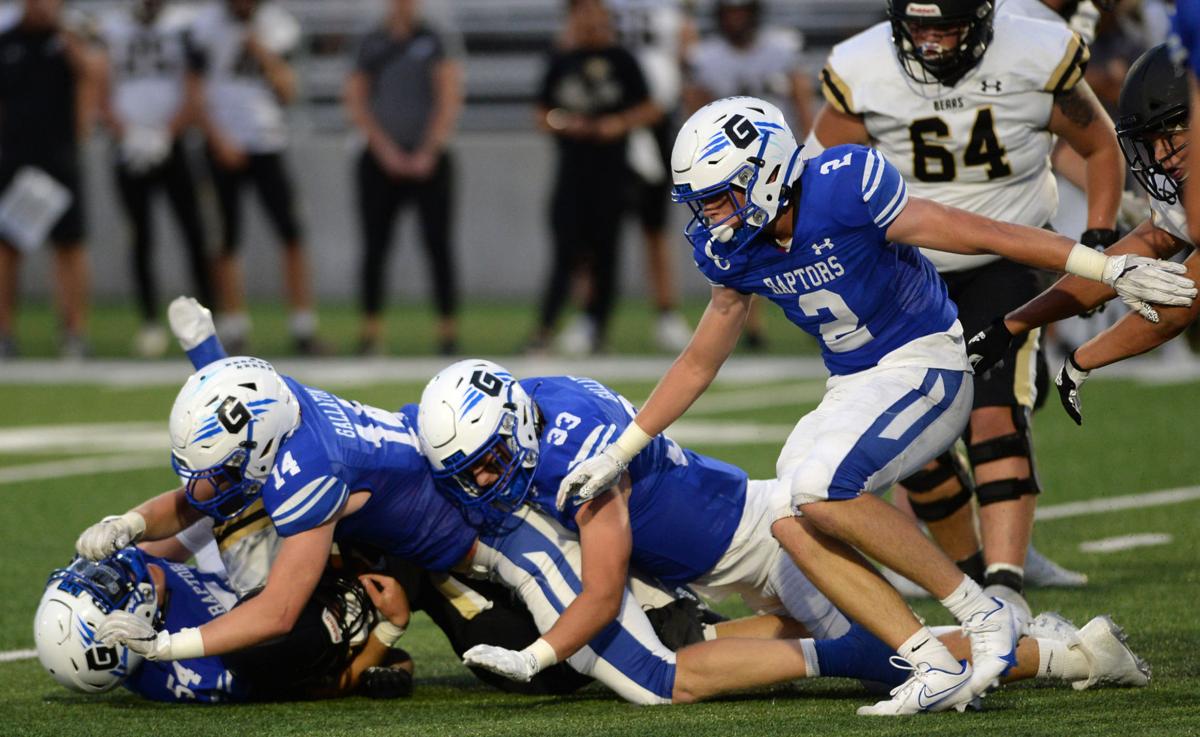 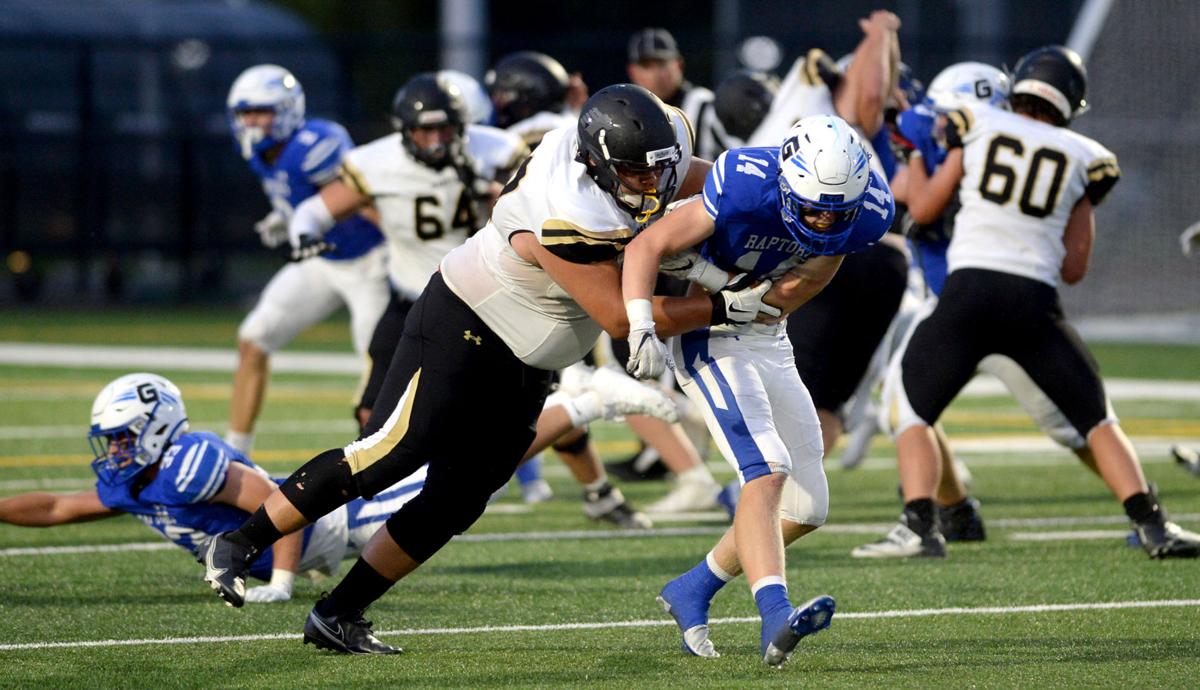 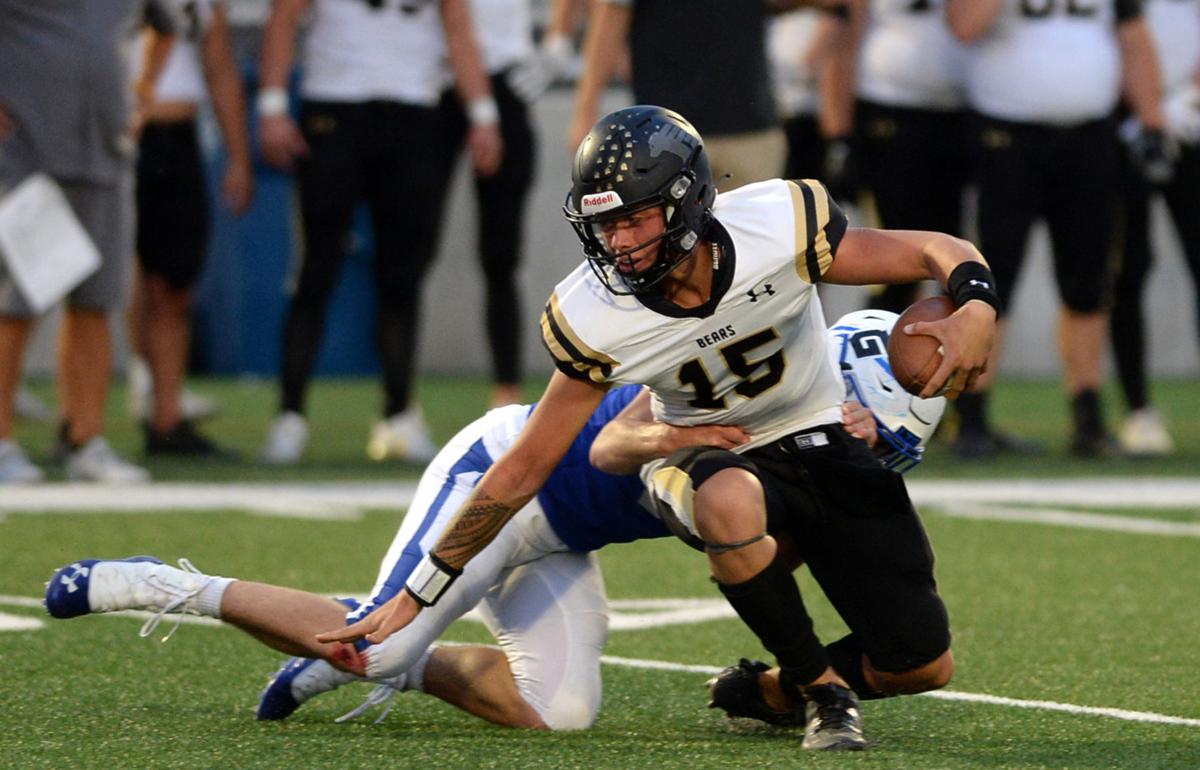 Gallatin’s Garret Coley and Carson Ely congratulate Tyler Nansel after a play in the first half of Friday’s game at Van Winkle Stadium.

Gallatin's Evan Cherry, left, congratulates Tyler Nansel after an interception by Nansel in the first half of Friday's game at Van Winkle Stadium.

BOZEMAN — On the opening play of the second half, Gallatin’s intentions for establishing some momentum against Billings West were dashed.

The Raptors’ play improved in the latter half of the second quarter, but they fumbled the ball coming out of the break. Golden Bears running back Michael DeLeon scored on a 4-yard rush two plays later, and West — the Class AA runner-up from a year ago — was spurred to a 42-14 victory at Van Winkle Stadium in the Eastern AA opener for both teams.

In a battle of proven contenders versus emerging challengers, the Bears exemplified how valuable experience can be.

The Raptors entered the game 2-0, on the first winning streak in the school’s short history, but couldn’t match the pace of one of the better teams in the state.

“There’s a lot of plays we left out there on the field that we didn’t execute at times,” Raptors head coach Hunter Chandler said. “I don’t want to make excuses for our team. A lot of these guys played varsity games. We can’t use that as a crutch — yeah, we’re a second-year program. But we didn’t block well enough, we didn’t tackle well enough and we didn’t make good enough plays. That’s the bottom line.”

Gallatin got the ball back immediately after DeLeon’s score but had to punt. On the ensuing West drive, DeLeon burst through the line again, as he did all night, and raced 56 yards to the end zone. He fumbled on the 1-yard line, though, and the Raptors recovered for a touchback. The Raptors offense again stalled and was forced to punt.

Given another chance, the Bears dialed up another big play. Quarterback Isaiah Claunch found Rhett Zitzow for a 43-yard score. The pass bounced off the receiver’s hands briefly inside the 5, but he regained control as he entered the end zone.

In a blistering sequence, West turned a two-score lead into a four-score cushion and never looked back. The Bears took advantage of ill-timed miscues from the burgeoning program and moved their record to 2-1.

“In the field position game, we didn’t do ourselves any favors,” Chandler said. “We gave them too many short fields.”

Zitzow intercepted Gallatin quarterback Braeden Mikkelson on the very next drive and returned it about 20 yards for a touchdown and a 35-point lead.

The play marked West’s final points of the game. The Bears needed no more.

“That’s a bad sequence, and that type of stuff you can’t do against a good football team like Billings West,” Chandler said. “Until we eliminate those (plays), we’re not going to win a game like this.”

Mikkelson found tight end Rylan Schlepp for a 27-yard touchdown with 5 minutes, 9 seconds to play against West’s backup defense with the game already out of reach.

The Raptors’ first score came in the second quarter after West had already opened a 21-0 lead.

Michael Armstrong caught a tipped Mikkelson pass and raced up the field for 40 yards. That play set up Mikkelson’s 29-yard throw to Tyler Nansel in the front right corner of the end zone with 7:29 left in the half.

The game went to halftime with that 21-7 margin.

After the teams traded turnovers on downs to begin the contest, Billings West opened the scoring with a 76-yard pass from Claunch to Riley Bergeson. The quarterback found his receiver in single coverage along the right sideline. Bergeson got a step on Noah Dahlke and then broke the defensive back’s tackle attempt on his way to the end zone.

DeLeon tallied touchdown runs of 17 and 46 yards in the second quarter to build the 21-0 edge with 9:34 left in the half. On the first run, DeLeon shrugged off a pair of tackles in the red zone. On the second, he went through the offensive line to the right and cut back up the middle through the second and third levels of the defense.

“Coming into the game, we didn’t want to let Taco Dowler beat us, and we limited him as much as we could,” Chandler said, referring to West’s talented receiver and kick returner. “But the other thing we had to do was stop (DeLeon), and we didn’t do that. We didn’t tackle well enough in space.”

Nansel’s touchdown came after DeLeon’s, and he intercepted Claunch with 5:15 to play in the half. Gallatin couldn’t turn the next drive into points, but momentum was more on the Raptors’ side at that point than at any other in the first 24 minutes.

West needed 18 fourth-quarter points a week ago to create some meaningful separation against Helena Capital. The Bears didn’t wait nearly as long against the Raptors.

“We’ve got to take this one on the chin and go back and evaluate quickly,” Chandler said, referring to a short turnaround with a game on Thursday at Billings Senior. “We’ve got to get ready to go again. Nobody’s going to feel sorry for us.”