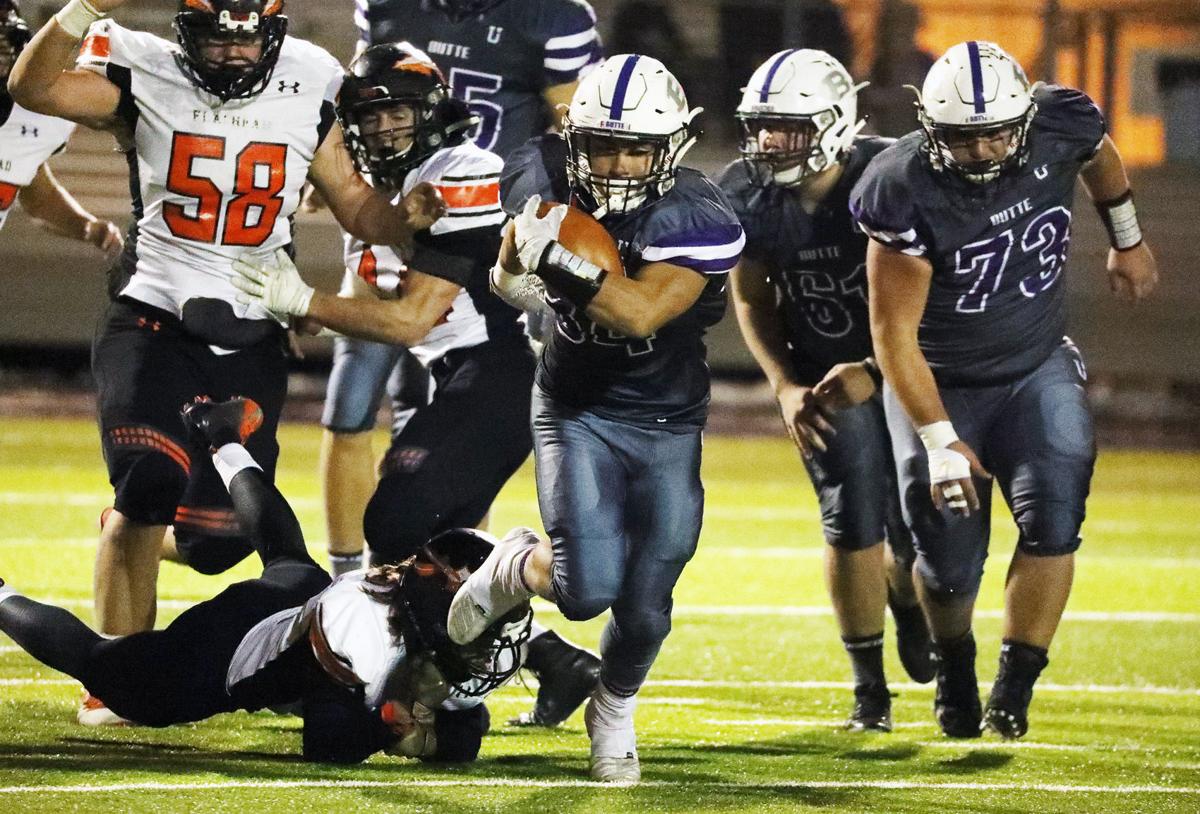 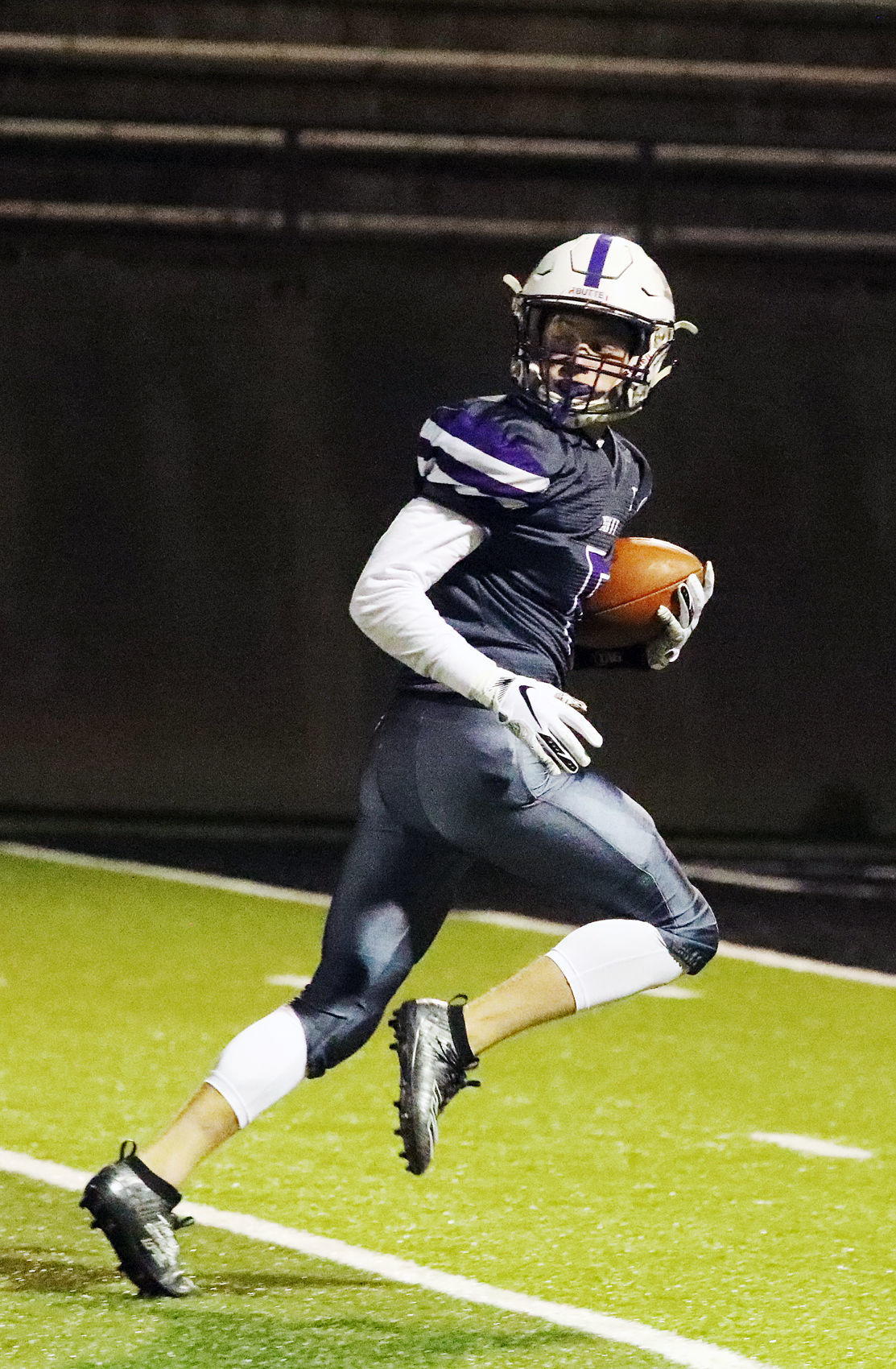 Butte's Ryan Neil carries the ball for a touch down in the first quarter against the Kalispell Braves at Butte High School. 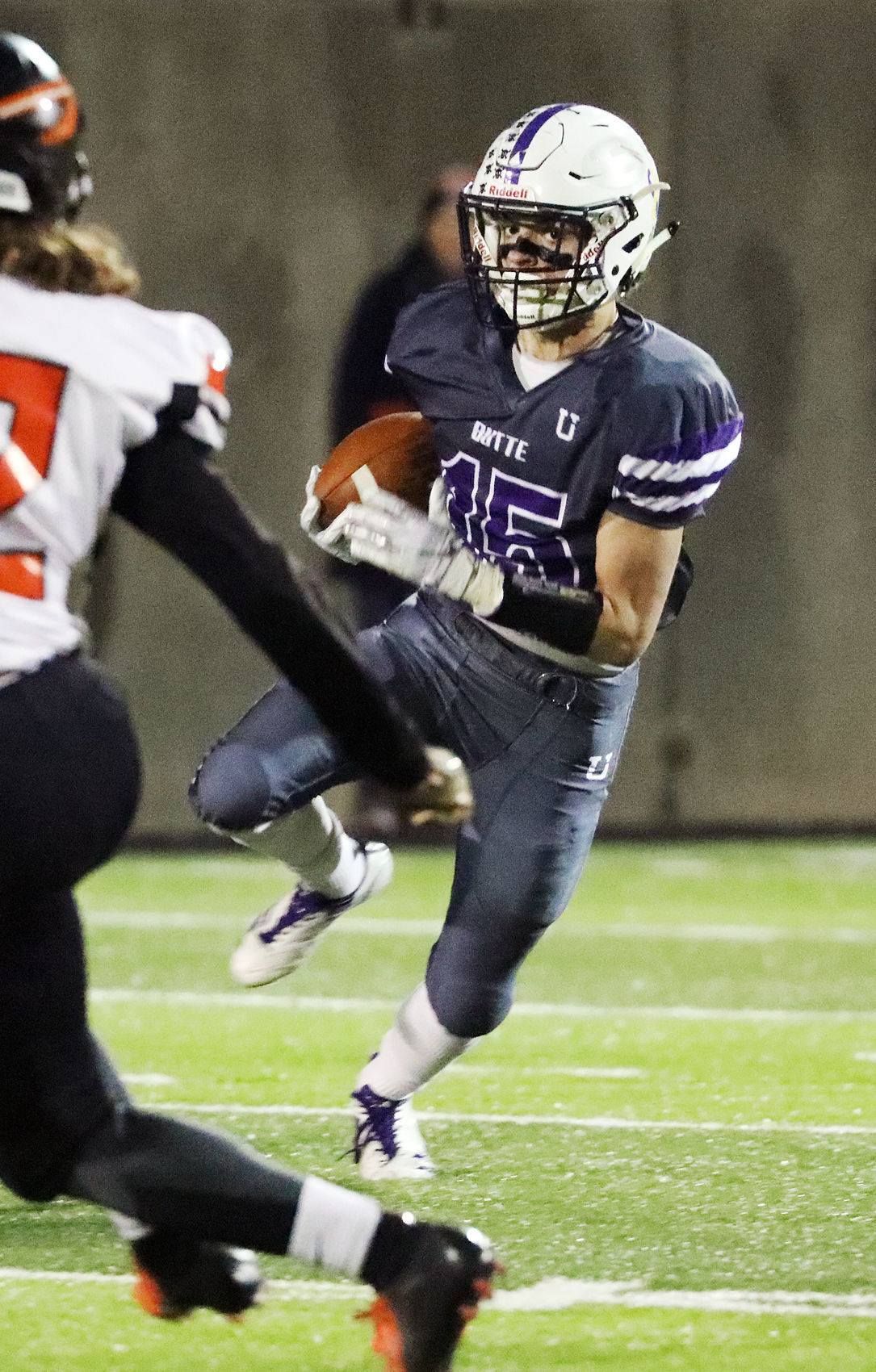 Butte's Cory West carries in an offensive drive against Kalispell on Friday night in Butte. 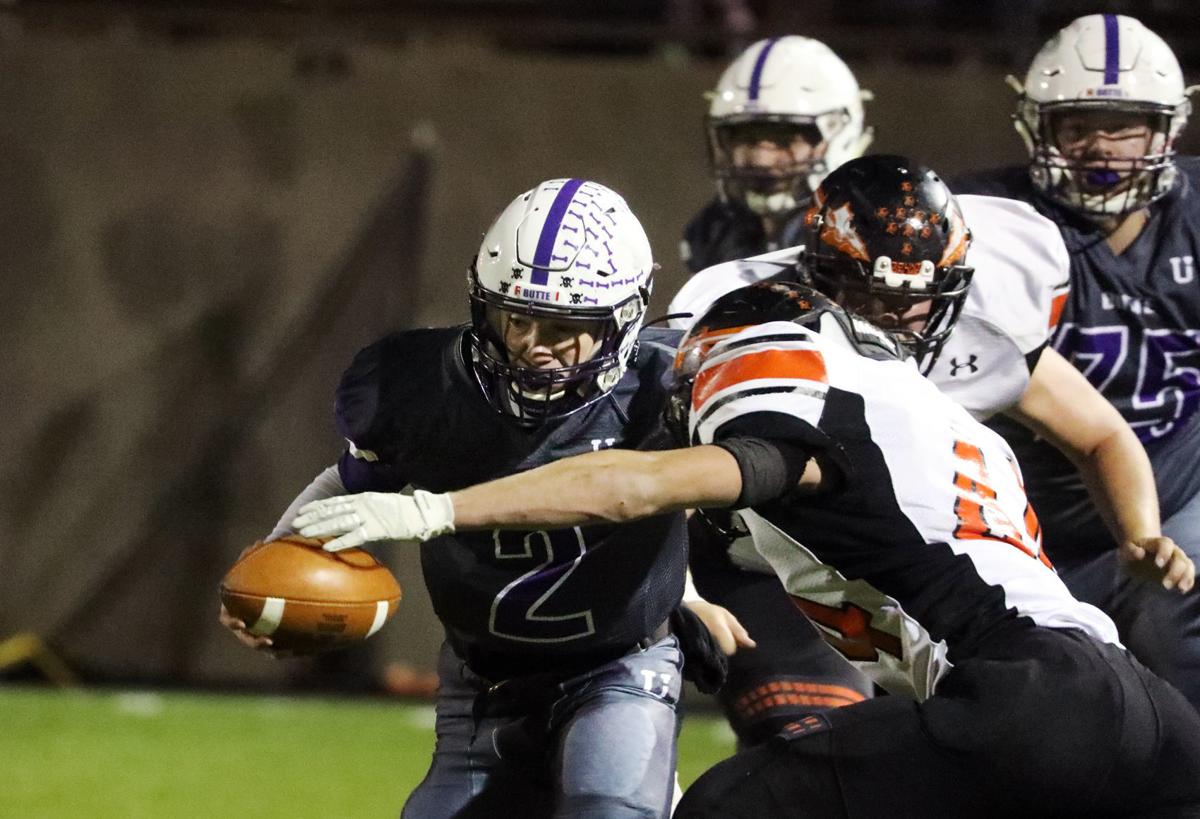 Butte's Tommy Mellott dashes around the Kalispell defense on Friday evening during the Bulldogs' victory in Butte. 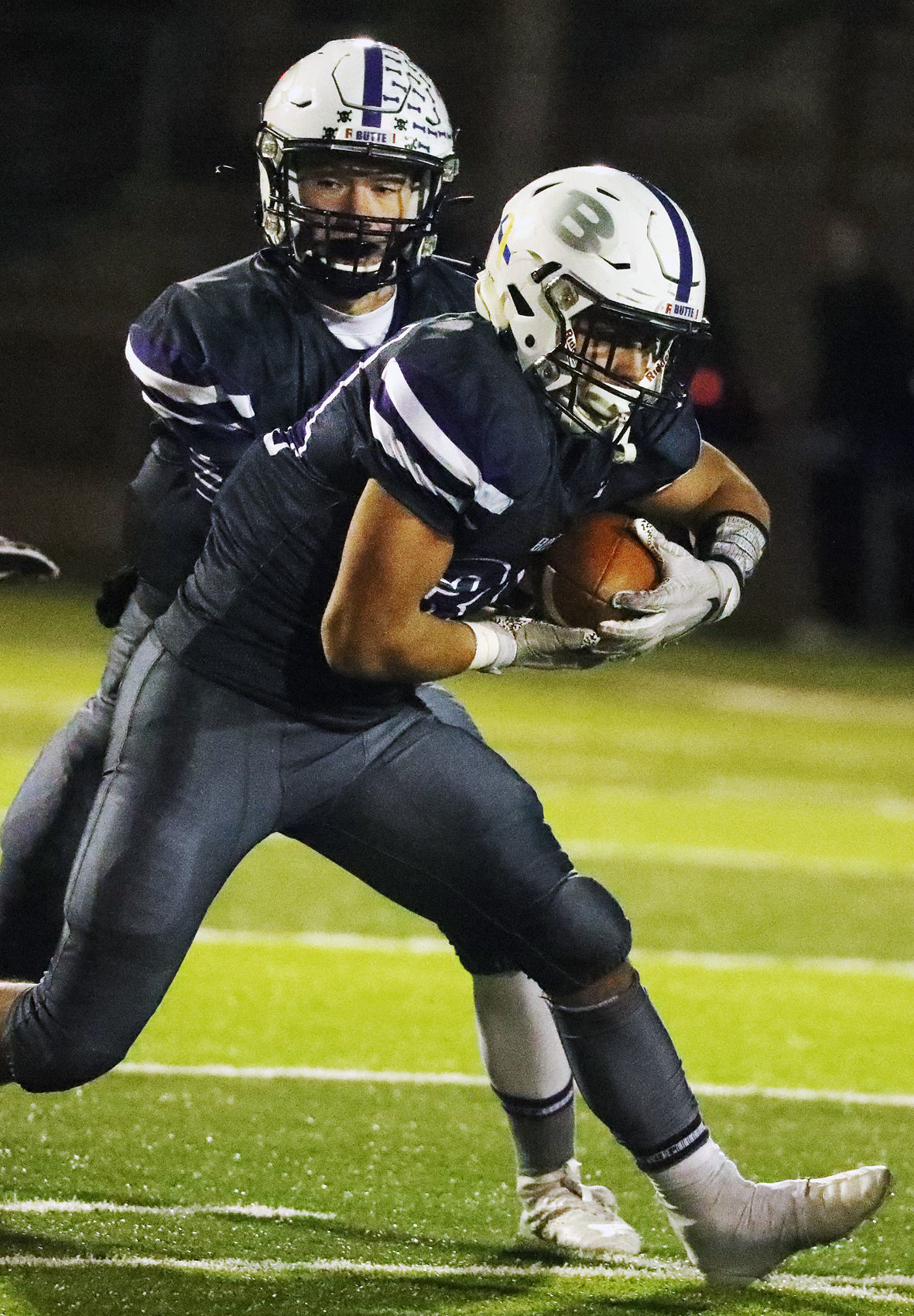 Butte High's footballs squad improved to 8-0 and clinched the Western AA with a victory over Missoula Big Sky on Friday. 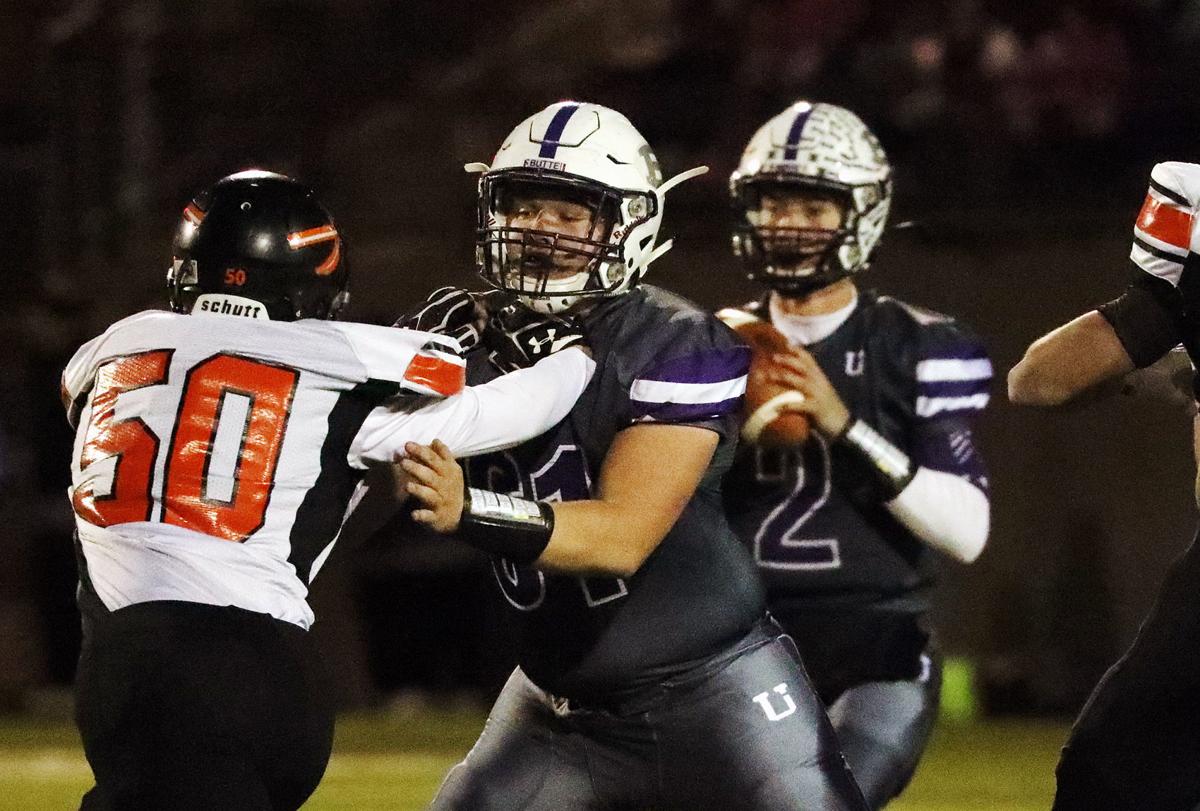 Butte's Timothy Hollingsworth holds back a Kalispell player in during an offensive drive on Friday night during the Bulldog's victory over the Braves in Butte.

Butte's Ryan Neil carries the ball for a touch down in the first quarter against the Kalispell Braves at Butte High School.

Butte's Cory West carries in an offensive drive against Kalispell on Friday night in Butte.

Butte High's footballs squad improved to 8-0 and clinched the Western AA with a victory over Missoula Big Sky on Friday.

Butte's Timothy Hollingsworth holds back a Kalispell player in during an offensive drive on Friday night during the Bulldog's victory over the Braves in Butte.

Moreno also had two sacks on the evening in a spirited performance.

The win moves the Bulldogs to 7-0 on the season, while the Braves drop to 1-6 on the year. It is the first shutout victory for Butte since 2014, when they blanked Hellgate 51-0.

“I just thought how we were able to able to control the line of scrimmage and make a quite a few plays in their backfield was really good,” Bulldog head coach Arie Grey said. “Credit to the defensive staff and what they put together, but the kids just played.

“We played with a ton of energy on defense.”

Moreno got the scoring started in the first quarter when he rumbled in from a yard out, closing out a four-play, 78-yard opening drive that took just 45 seconds off the clock. The touchdown was setup by a 49-yard pass from quarterback Tommy Mellott to Ryan Neil that put the Bulldogs on the 1-yard line.

Following a short drive from the Braves, the Bulldogs again scored, this time on a 38-yard touchdown pass from Mellott to Neil.

The senior signal caller then found Banner Cetraro from 28 yards out two drives later to put the Bulldogs up three scores with six seconds left in the first quarter. Sophomore kicker Casey Kautzman also drilled a 43-yard field goal with 4:36 left in the second quarter and the Bulldogs went into the locker room up 24-0.

“The offensive line, right off the bat, was able to do some nice things,” Grey said. “Credit to Flathead, they really did some good things up front against us.”

Mellott finished 12-of-24 for 274 yards and a pair of touchdowns and Neil had 101 yards on just four catches. Cory West, Quinn Sullivan and Kameron Moreno each had two catches and eight total players hauled in the pass.

But the real story of the night was the defense. A week ago against Helena Capital, the Bulldogs gave up 35 points in the second half of play and Grey said afterward that it would be a teaching moment, though his team still won the game by 18 points.

From the start of the contest, it was clear the Bulldogs were razor sharp on the defensive side of the ball. Seven different players recorded tackles for loss, including two by Quinn Sullivan, who finished with seven total tackles, a forced fumble and a blocked punt.

Ryan Neil is having himself a game. Just recovered this wild fumble #mtscores pic.twitter.com/GlV2abCmEu

He seemed to tweak his ankle on the block, but the injury did not seem serious.

The defensive backs for the Bulldogs were also impressive and Billy Kelly got an interception and pass breakup late in the game.

“It was one of those things where our defensive line was able to get some pressure … the secondary got some confidence and did some good things,” Grey said. “Proud of the kids, way to come out, way to go.”

Running back Tanner Russell was the only true bright spot on offense for the Braves, as he took 23 carries for 134 as Flathead heavily used its bag of counter players.

But passing the ball remained an issue for the Braves and quarterback Cooper Smith completed just five throws for 29 yards.

Next up for Butte is a date on the road with Missoula Big Sky, while the Braves will prepare for a cross-town showdown with rival Kalispell Glacier.

Crosstowns and rivalry games, all while upsets continued to shake up Class A especially. See what else you may have missed from week 7.