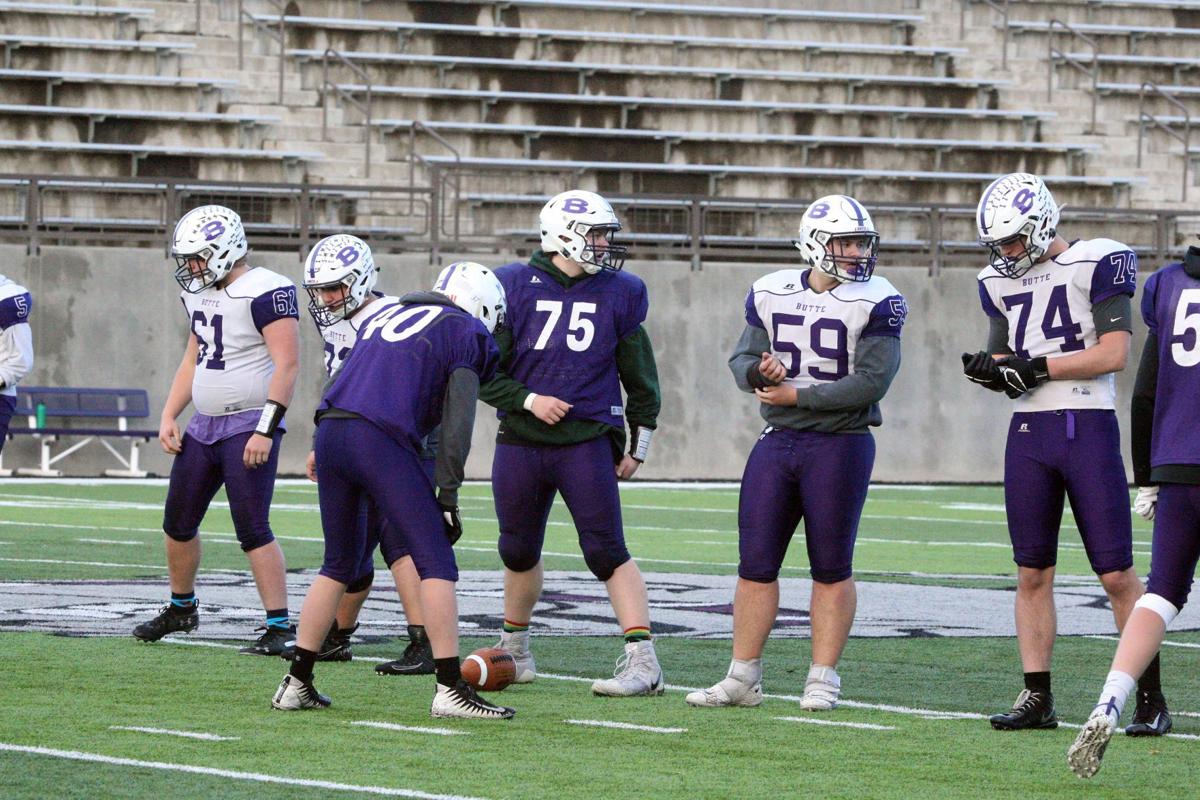 Konor McClafferty (74) lines up with the rest of the Butte offensive line during practice last November. 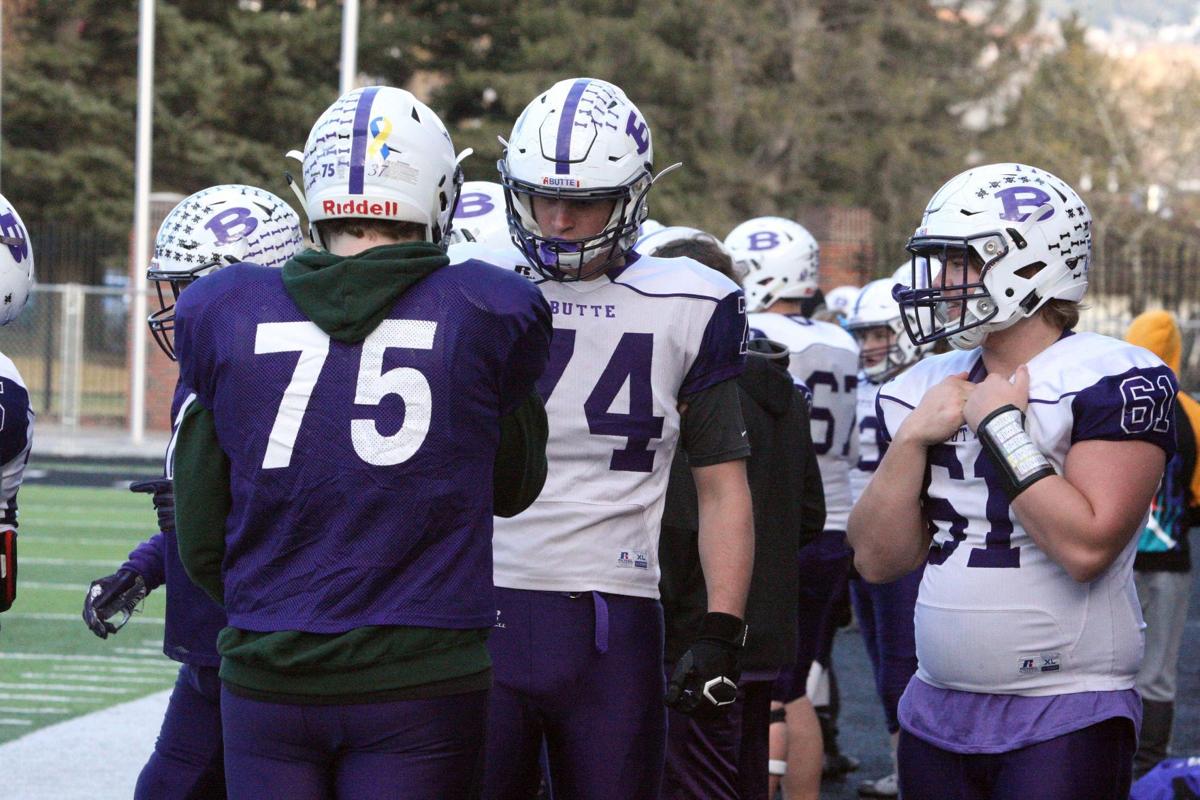 Butte's DJ Jackson, Konor McClafferty and Timmy Hollingsworth, members of the "Hogsquad" enjoy a moment off the field during practice on Thursday.

Konor McClafferty (74) lines up with the rest of the Butte offensive line during practice last November.

Butte's DJ Jackson, Konor McClafferty and Timmy Hollingsworth, members of the "Hogsquad" enjoy a moment off the field during practice on Thursday.

BUTTE — When an offense averages 45.5 points and 519 yards a game, who deserves the credit?

The answer for most is found somewhere in the minutia of football. It’s a group effort. A team sport. Success does not rest on an individual shoulders. These are all true points.

But there may not be a more important battle in football than the one fought at the line of scrimmage. No one knows this better than the Butte High offensive line, whose success in the dirty, spotlight-starved area of the gridiron have helped lead the Bulldogs to an undefeated season through eight games.

However, as senior tackle Konor McClafferty is sure to share, the success of the team is worth the grind.

“I love it,” McClafferty said. “I don’t want to play anywhere else. People don’t realize how much responsibility we have; all the glory goes to the quarterbacks, receivers and running backs. I love being able to let those guys make the plays while we’re doing all the dirty work.”

The inevitable grin appeared on McClafferty’s face as he spoke, because his fellow linemen asserted that he wants to play tight end in college. That may be true, but McClafferty’s sentiment represents his group.

McClafferty is a member of the “Hogsquad.” The 6-foot-7 senior is joined on the Butte starting line by fellow tackle Timmy Hollingsworth and interior lineman Ty Raiha, Lucas Kingston and DJ Jackson. In these small moments, it’s easy to see what Bulldogs head coach Arie Grey is talking about.

“There is no doubt: this is the heart and soul of this team,” Grey said. “This is a great group, and we’re very lucky. Awesome human beings, awesome young men. They’re good students as well as athletes, and I’m excited for their futures.”

Grey’s words are sincere, but is that the guy who’s coached up the Bulldogs to an 8-0 start? Jackson answered with a confident yes.

“He’s nice all the time,” Jackson said. “But he’s got a different side in the game. You know he cares, because he’ll let you know if you screw up, but he always come back with a happy face and being nice while telling you what you did wrong.”

Whatever Grey’s system is, it’s worked. Butte has been an unstoppable force on both sides of the ball, but the offensive balance has been key to dominance.

The Bulldogs’ passing and rushing averages differ by just nine yards, with the Tommy Mellott-led air attack averaging 264 yards a contest and the Kameron Moreno-featuring rushing offense clocking in at 255.

Kingston, a senior, says that a large source of confidence and success is executing on both ends of the offensive spectrum.

“I think we pride ourselves on balance,” Kingston said. “We want to be able to run and pass the ball in every game we play. I always prefer blocking for the run instead of the pass, but we’re well-rounded and we know how to block for both pretty well.”

But wanting to be an all-round offensive line and being one is a key difference.

For Raiha, the separating factor comes down to physicality, an aspect the Hogsquad puts a priority on winning each week.

“Our coaches always tell us,” Raiha said. “We were the most physical team last week, but we have to prove it each and every game. It’s been implemented in our brains that we can be more physical than whoever we play.”

Raiha, McClafferty and Kingston all had a year or more under their belt before the Bulldogs’ undefeated run, but Jackson and Hollingsworth are first-year starters, with big changes from prior years.

Hollingsworth has the look of a classic interior lineman, but was asked to move outside to tackle, and has kept the job since taking over.

McClafferty talked about the value of having someone you trust on the opposite side of the line, and that Hollingsworth step up from limited playing time and into a starting tackle position has been great for the group.

“I only played part of last year and barely lettered,” Hollingsworth said. “It’s been great to start on this offensive line and I’m really proud of my boys.”

As for Jackson, the junior had to overcome a new environment: the 6-4 lineman was previously at Missoula Big Sky before suiting up for Butte.

However, his transfer has apparently gone smoothly, with the first-year Bulldog slotting into the starting five and playing a key cog in the offensive machine.

“It took a lot of teachable moments,” said Raiha, as he and the group erupted into laughter. “But they learned so fast. DJ had to learn our scheme compared to what Big Sky’s was, but it’s like he’s been here 10 years. He fit in instantly.”

The Hogsquad’s role in Butte’s undefeated season is more than just key blocks. The personality of the group is palpable.

Now, the group heads into its last home game of the regular season. With at least another game at the Naranche guaranteed thanks to playoffs, it’s not the last time any Butte senior hits the field, but senior night celebrations provide the sentiment all the same.

When asked about the Bulldogs’ game against Missoula Hellgate, Kingston kept things short: it’s just “weird.” The near-lifetime of playing in football, the four years at Butte still seem to be hitting him, which is understandable.

The outspoken McClafferty, though, didn’t shy away from emotion.

“It being my last regular-season home game,” McClafferty said. “I can tell you: it’s going to be rough for me. But I can’t wait, and I’m going to play my heart out.”

It’s not the last rodeo for McClafferty and Kingston, but it’s the final piece to a perfect senior season.

BUTTE — If there is one place to be in Butte Friday night, it’s Naranche Stadium.