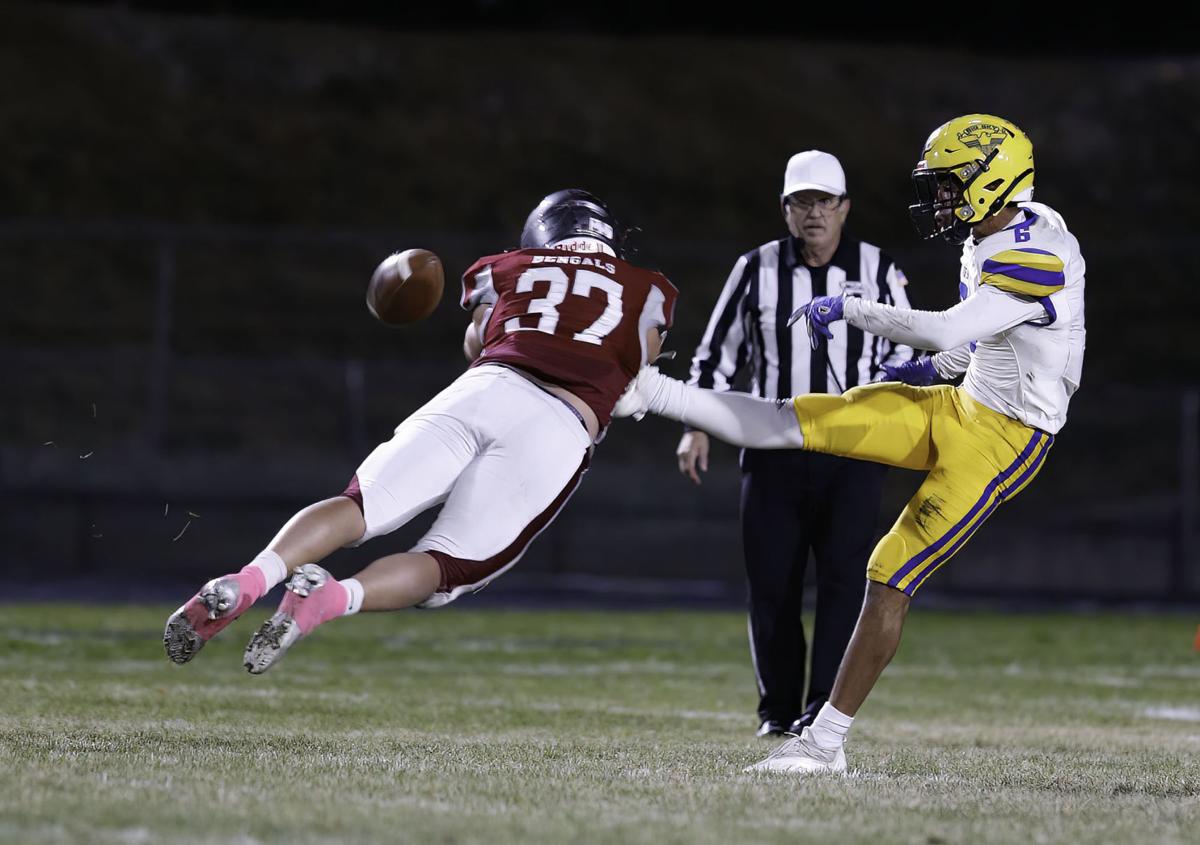 Helena High's Marcus Evans is pictured blocking a punt during the 2021 season in a 42-7 win over Missoula Big Sky. 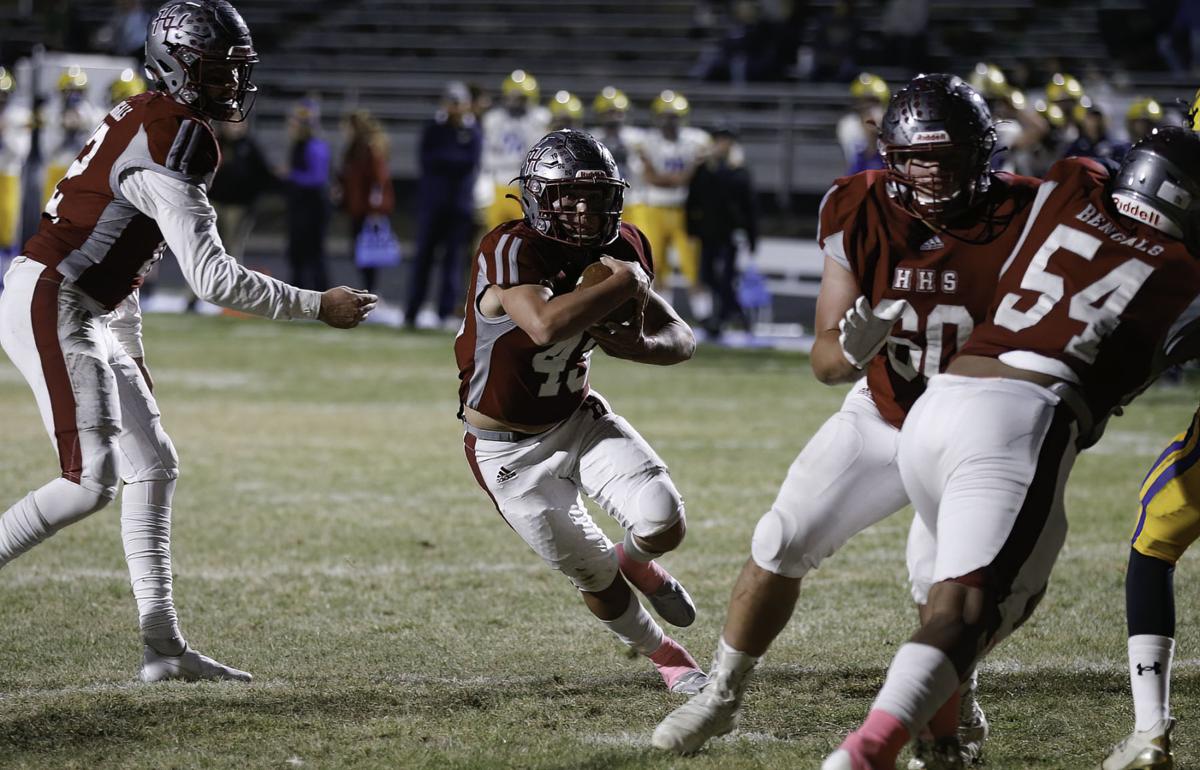 Helena High's Cade Holland is shown scoring one of three touchdowns for the Bengals during their 35-point win. 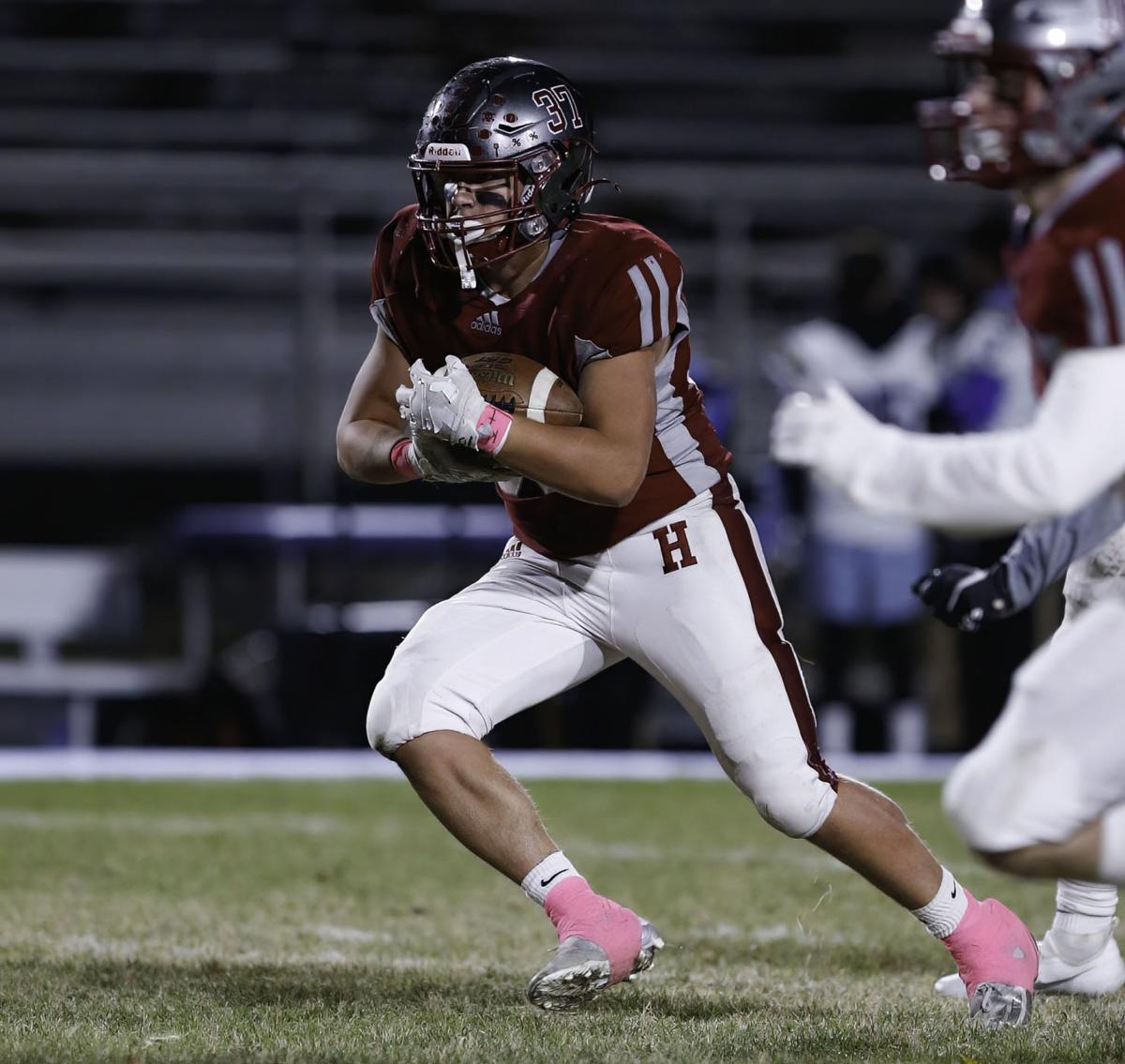 Marcus Evans carries the ball for the Bengals in a 42-7 win over Missoula Big Sky.

Helena High's Marcus Evans is pictured blocking a punt during the 2021 season in a 42-7 win over Missoula Big Sky.

Helena High's Cade Holland is shown scoring one of three touchdowns for the Bengals during their 35-point win.

Marcus Evans carries the ball for the Bengals in a 42-7 win over Missoula Big Sky.

Helena High didn't play its best game of the year on Friday night against Missoula Big Sky. But the Bengals didn't need to.

They just needed a win and that's what they got after trouncing Missoula Big Sky 42-7 at Vigilante Stadium in a Western AA conference matchup.

"It was kind of the lull," Helena High head coach Scott Evans said. "We were doing some great nights but it seemed like we never got in a rhythm. I like winning and it's hard to complain when you win."

While both teams were sloppy and there was a total of seven turnovers (three for Helena High, four for Big Sky) Helena Senior Marcus Evans provided an early spark for the Bengals and with a slew of tackles on defense, a blocked punt, a rushing touchdown, as well as an nifty hurdle for a first down, it turned out be on memorable night for the senior son of the head coach.

"He was excited, I kind of challenged him a little bit after last week," Coach Evans said. "We talked about some stuff. He missed some tackles last week and I kind of rubbed it in a little bit. I'm not going to lie, I did the whole dad thing and he was fired up."

"But I told him he was going to get one (a blocked punt) this week."

By the time Evans blocked the punt from Big Sky, Helena was in the lead thanks to a one-yard touchdown run by Cade Holland, which came on the heels of a 4th-and-17 conversion near midfield, on a catch by Holland.

On the drive after the blocked punt, Evans flashed his offensive playmaking ability, hurdling a defender to push the ball in the red zone before Holland, a junior who finished with three touchdowns total, capped the drive on a one-yard run again, making it 14-0 Bengals early in the second stanza.

"It was an awesome," Marcus Evans said of Senior night. "I blocked a punt. I got a touchdown; I hurdled a kid. It was just an all-around awesome night."

Later in the quarter, Helena's momentum was slowed momentarily when Louis Sanders intercepted Kaden Huot in the red zone, but on the Bengals' next possession, Huot finished off a two-minute drive by connecting with Kade Schlepp from 10 yards out to make it 21-0 at the half.

At the start of the third, another senior, Chase McGurran intercepted a pass, then a few plays later, hauled in a 26-yard reception to convert a third-and-nine.

Then, after yet another fourth-down conversion for Helena, which converted five total, Evans finished the drive with a three-yard touchdown run, making the score 28-0 with eight minutes left in the third.

Following an exchange of fumbles, the Bengal defense came up with another takeaway as Colter Petre intercepted a pass and returned it deep into Big Sky territory.

Helena would score on a drive that included another fourth-down pickup from Huot to McGurran, before the senior quarterback found Holland from eight yards out for a score on his second touchdown on the night.

With Helena leading 35-0, the clock ran early in the fourth due to the mercy rule before Big Sky got on the board thanks to a touchdown pass from Caleb Hren to Sanders.

It cut the lead to 28, but not for long as senior quarterback Garrett St. Clair threw his first career touchdown pass on a 55-yarder to Manu Melo with just one a minute remaining to cap a 35-point win for the now 6-2 Bengals.

"This team just has a lot of drive," Marcus Evans said. "This is one of our last home games and we just played for each other all night. One of our guys, Garrett St. Clair finally got his touchdown tonight, and I'm so proud of him and all our guys, they played great."

Helena held Big Sky to negative yardage in the first half and had multiple sacks in addition to four takeaways. Huot finished with two touchdowns which got him to 20 touchdown passes total, a feat he's reached two years in a row. He finished 20-of-33 for 210 yards, while also running six times for 31 yards. Holland finished with 64 yards on 15 carries, while Evans had two receptions for 31 yards and three runs for 17. Schlepp also hauled in five passes for 78 yards and a score.

Helena (6-2, 4-2) will finish no worse than fourth in the Western AA standings. Next week's crosstown matchup with Capital (5-3, 4-2) will have playoff implications for both teams as the Bruins can clinch the No. 2 seed with a win, while Helena can wrap up the No. 3 spot.

"It's going to be a big game," Evans said. "And that's going to make that game even better now that it's for playoff positioning."