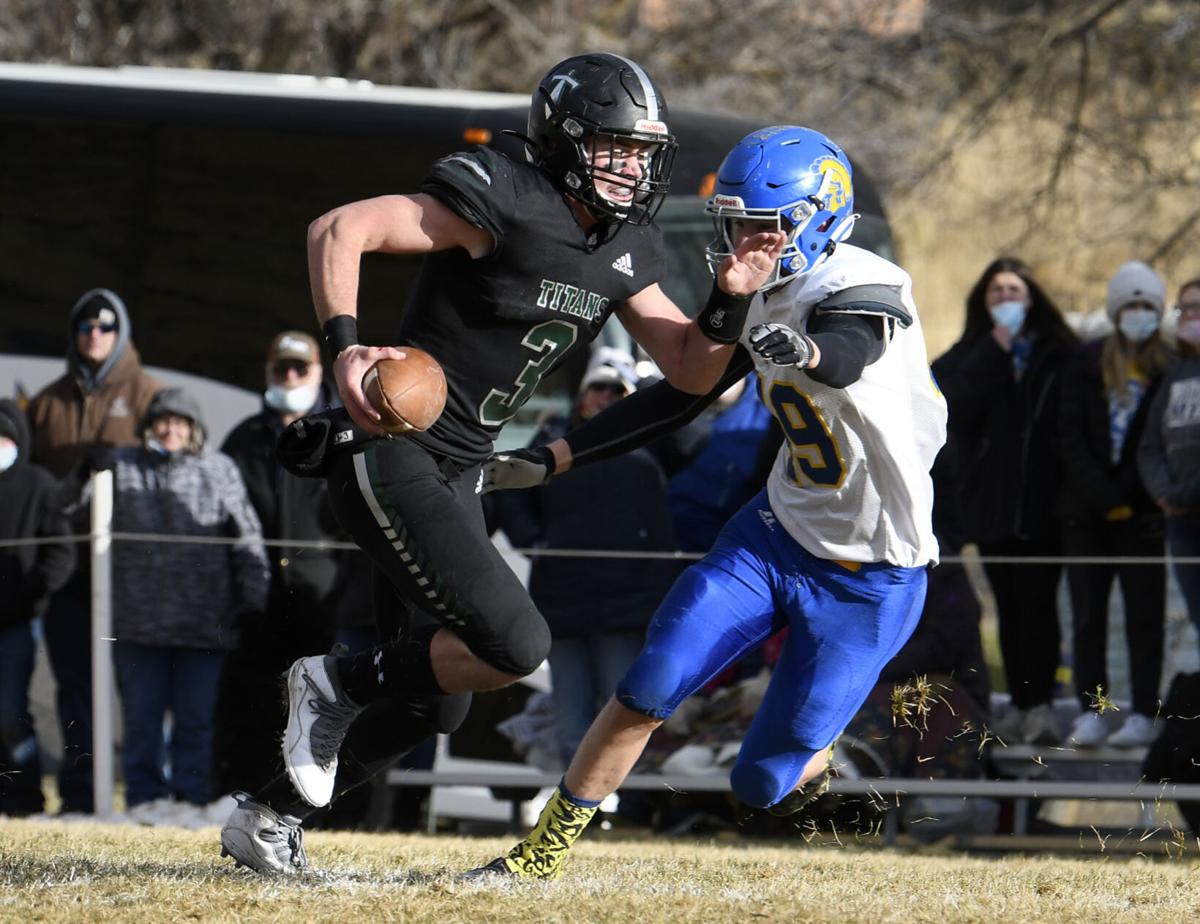 Flint Creek quarterback Kade Cutler rushes for yards as Cole Taylor of Scobey attempts a tackle during the state 8-Man football championship on Saturday in Drummond. Flint Creek won the championship 44-6, and the Drummond-Philipsburg co-op team finished with a perfect 12-0 record. 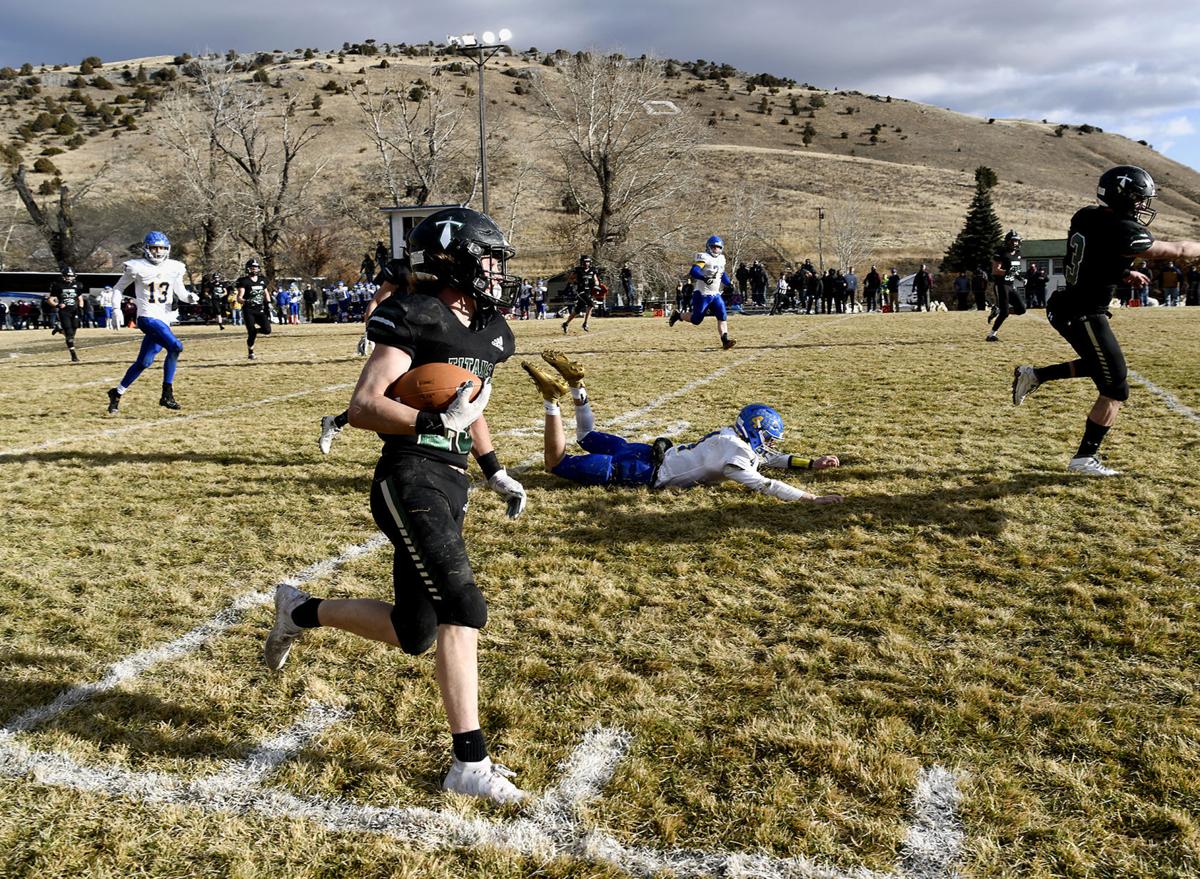 Flint Creek's Avery Metesh returns a 52-yard interception for a touchdown late in the first half to give the Titans a 14-6 lead on Saturday in Drummond. 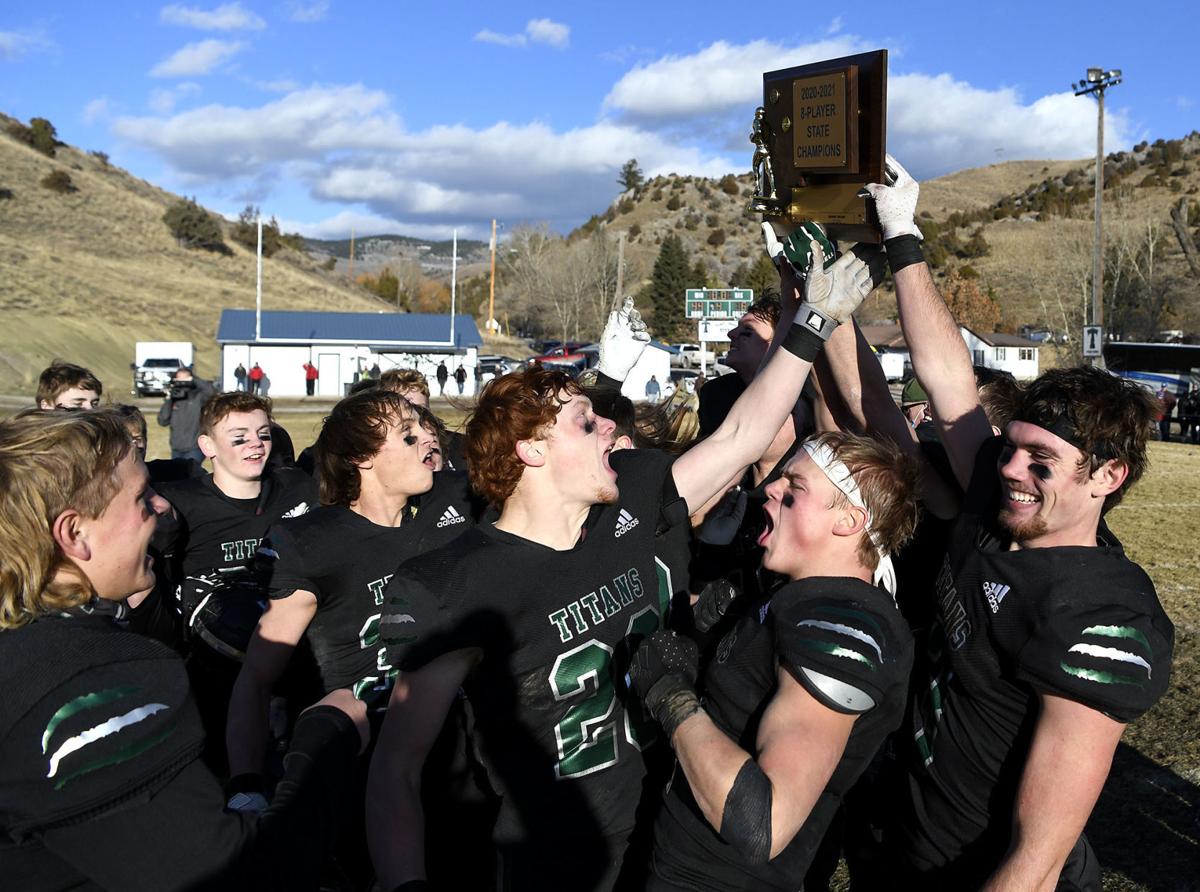 The Titans hold up the 8-Man Championship trophy, the third state championship in four years for Flint Creek. 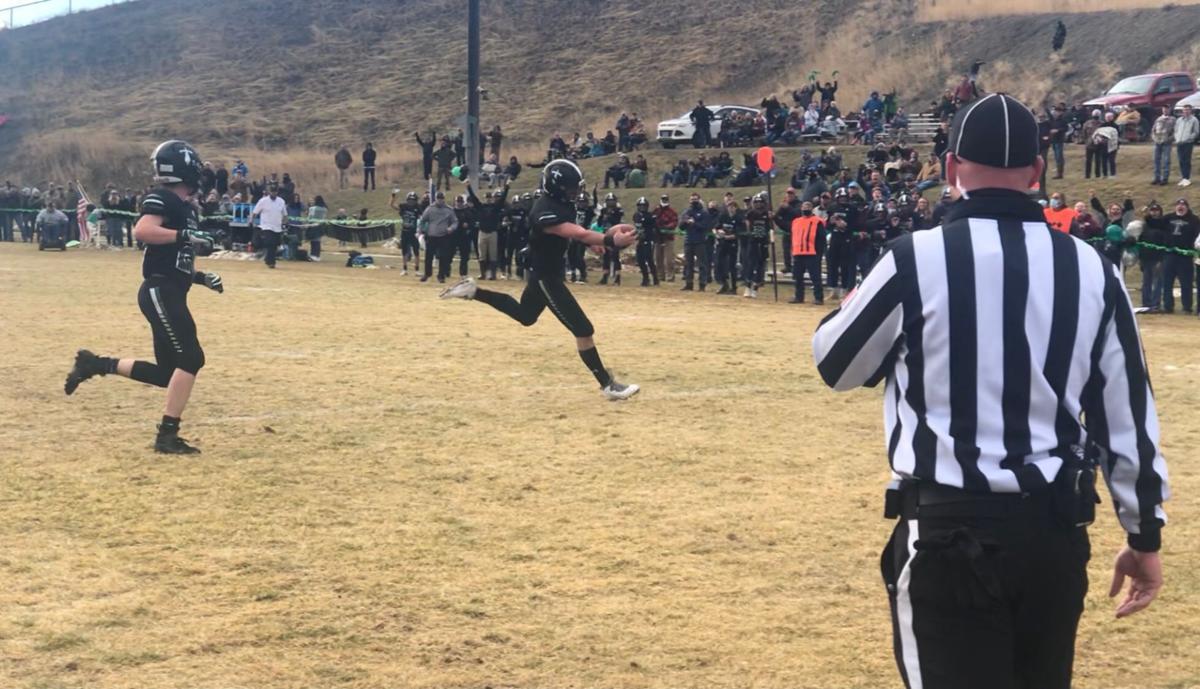 Drummond-Philipsburg's Kade Cutler runs into the end zone on a 9-yard touchdown in the first quarter during the 2020 8-man football championship against Scobey in Drummond. 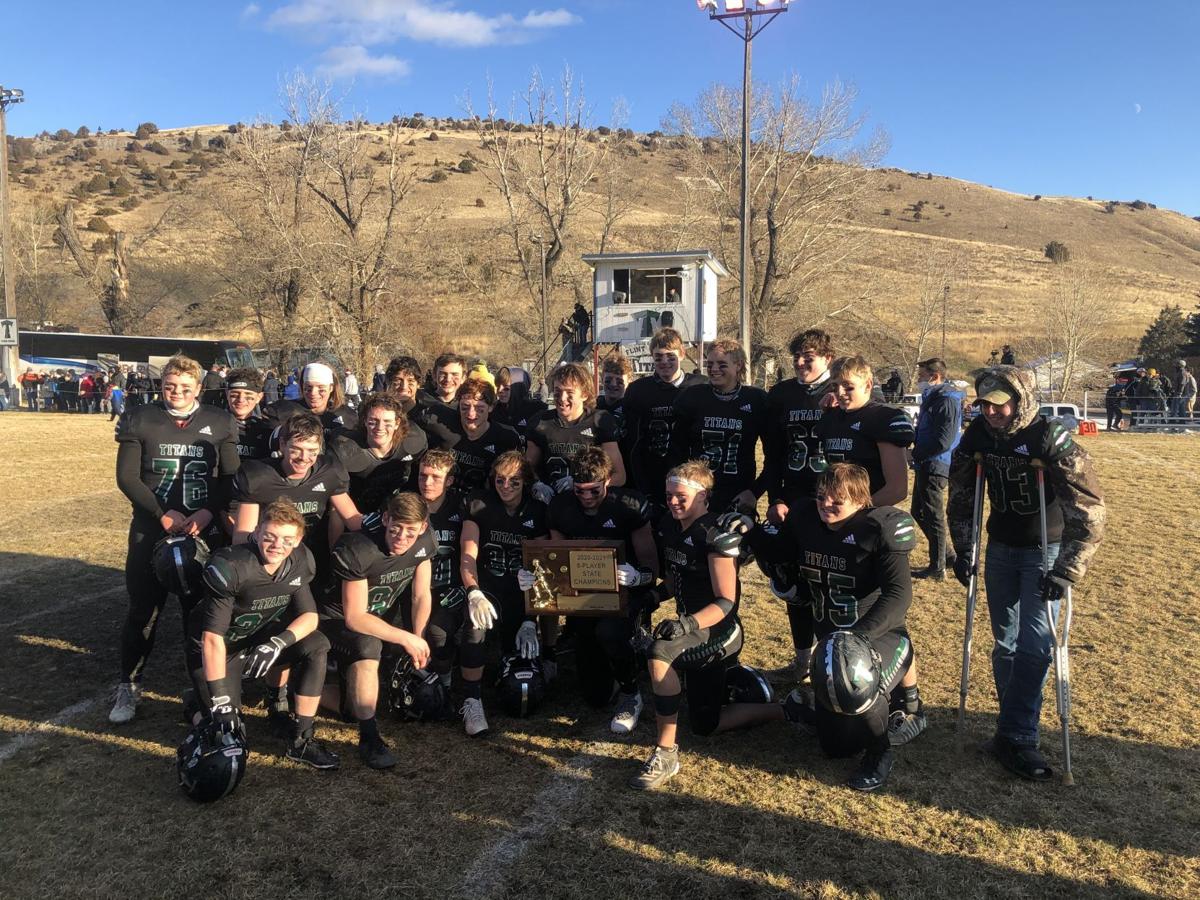 The Flint Creek Titans pose with their third 8-player football championship trophy earned in the last four years Nov. 21, 2020 in Drummond after a 44-6 defeat of Scobey.

Flint Creek quarterback Kade Cutler rushes for yards as Cole Taylor of Scobey attempts a tackle during the state 8-Man football championship on Saturday in Drummond. Flint Creek won the championship 44-6, and the Drummond-Philipsburg co-op team finished with a perfect 12-0 record.

Flint Creek's Avery Metesh returns a 52-yard interception for a touchdown late in the first half to give the Titans a 14-6 lead on Saturday in Drummond.

The Titans hold up the 8-Man Championship trophy, the third state championship in four years for Flint Creek.

Drummond-Philipsburg's Kade Cutler runs into the end zone on a 9-yard touchdown in the first quarter during the 2020 8-man football championship against Scobey in Drummond.

The Flint Creek Titans pose with their third 8-player football championship trophy earned in the last four years Nov. 21, 2020 in Drummond after a 44-6 defeat of Scobey.

DRUMMOND — Flint Creek’s celebratory fire truck ride into Drummond and throughout town was much longer than the 129 seconds the Drummond-Philipsburg co-op needed to flip the script in the 8-Man state championship football game Saturday.

The Titans (12-0) returned an interception for a touchdown, ran back a kickoff for a score and converted an interception into a touchdown as a potential halftime stalemate ballooned into a 22-point lead before all the fans got back in their spots along the sideline for the second half.

The Flint Creek Titans get a fire truck ride back into town after winning the 8-Man state championship for the third time in four seasons. #mtscores pic.twitter.com/MruGW4H0oJ

That flurry of scores on a picturesque late-November afternoon was the start of 38 unanswered points for the Titans, who cruised to a 44-6 victory over Scobey (10-2) to capture the state title for the third time in four seasons by making the types of plays championship teams make in crucial moments.

“I think that’s exactly what we did,” Flint Creek coach Mike Cutler said. “These kids have been in these moments before. That’s a big deal. They have those experiences. We just had to settle them down at halftime on offense because we were shooting ourselves in the foot.

“Big-time players at any level, whether it’s junior high, high school, grade school, whatever, make big-time plays. But they don’t make those touchdowns without people doing their jobs in front of them.”

Not all of Flint Creek’s players who answered the bell had proven themselves on the biggest stage. They’ve been part of the Titans’ dynastic program, but they needed to prove they were capable of making those plays on the field with a championship in the balance.

Junior Avery Metesh, who had two of the Titans’ four picks against Scobey quarterback Jayce Tande and returned one for a touchdown, was a freshman on junior varsity when Flint Creek won in 2018. He played late in games, including the title tilt, when the outcome was in hand.

Senior running back Preston Metesh, who ran for two touchdowns, was relegated to the same role as his brother when he was a freshman on the 2017 team. In 2018, he was a starter, but an injury forced him to miss time, playing sparingly in the 2018 title game.

Perhaps the most experienced was senior quarterback Kade Cutler, a Montana State commit who scored three touchdowns and intercepted two passes. He was on junior varsity as a freshman behind quarterback Colton Grange and took over as the starter during the 2018 run.

For most of the first half, the Titans looked like a team with little or no experience in deep playoff runs. But then they flipped the switch, got better blocking from their line, forced five of Scobey’s seven turnovers in the second half and resembled the team that finished the season outscoring its opponents 658-76 in 12 games.

“We just played with our fire,” Kade Cutler said. “We didn’t play with a whole lot of fire in the first half, and it killed us. We knew we just had to do what we do in the second half: Play with our fire. We came out swinging and threw haymakers right off the bat.”

Second half is under way in the 8-Man state title game.

And Kade Cutler returns it 68 yards for a TD. 2-point run fails.

That fire resulted in the third championship in four years for Flint Creek and head coach Mike Cutler. He’ll retire with a 44-4 record in four seasons, having gone undefeated in three of those seasons and ending the 2019 season in the quarterfinals.

The Titans, who were created in 2014 by bringing together rival programs Drummond and Philipsburg, are the first 8-Man team to win three titles in four or fewer seasons since Drummond won three in a row and five in seven years from 2003-09. The last time a team in an 8-Man title game scored fewer than six points was 2005, when Drummond shut out Park City.

“I just think it’s an awesome program,” Avery Metesh said. “You can’t deny the facts. We’ve won 75% of them in the last four years. We’ve really come together as a community. This is simply amazing.”

Metesh jumpstarted the Titans on the road to assuring that 75% statistic, picking off a pass and returning it 52 yards for a touchdown with 9.4 seconds left in the first half to give Flint Creek a 14-6 halftime lead. It was the first of six consecutive Scobey drives that ended with an interception or turnover on downs, save for an end of half.

Before that, the Titans had struggled to find the end zone, coming up empty on three of four trips into the red zone, including having a wide-open receiver drop a pass in the end zone. They had gotten on the board on Kade Cutler’s 9-yard touchdown run, but Scobey answered the next drive with Tande’s 16-yard touchdown pass to Colter Oie, the Spartans’ lone score.

Kade Cutler made up for his first-half struggles by returning the second-half kickoff 68 yards for a touchdown and a 20-6 lead. On the ensuing possession, Avery Metesh, who Mike Cutler dubbed the defensive player of the game, picked off Tande again, and Cutler converted that into a 3-yard touchdown run for a 28-6 advantage just 1:59 into the third quarter.

The rout was on.

Preston Metesh put the finishing touches on the game and started a running clock in the fourth quarter by rushing for a pair of touchdowns, 12 and 30 yards.

“It was a tale of two halves,” seventh-year Scobey coach Brock Berryhill said. “We hung in there and battled that first half, but we had too many turnovers for one. That kickoff return for a touchdown was the beginning of the end for us. We never really recovered from it. And that pick-6 was a killer deal right there too.

“I’m still proud of our kids. They battled all year. It was a good season. I’m proud of their effort. Kind of a bummer to end it the way we did.”

The Manhattan football team scored 23 straight points en route to a 23-6 win in the Class B state title game at Fairfield. It's the first state championship in program history for the top-ranked Tigers, who finished the season 12-0.

Manhattan has 12 seniors on its roster, including Cayl DeBouer. The 6-foot-3, 215-pound lineman suffered a stomach injury against Townsend on Oct. 16 that put him in the hospital and required surgery. His scare provided extra motivation for the Tigers in their final five games.

Fairfield (8-2) opened the scoring Saturday at the 3:48 mark of the first quarter, when junior Daniel Faith rushed 34 yards for a touchdown. The Eagles failed to score again in part because Faith exited the game in the second quarter. A Fairfield trainer said Faith's right triceps tendon was likely torn.

Coverage of the championship round of 2020 high school playoffs for Class AA, Class A, Class B, 8-man and 6-man football.