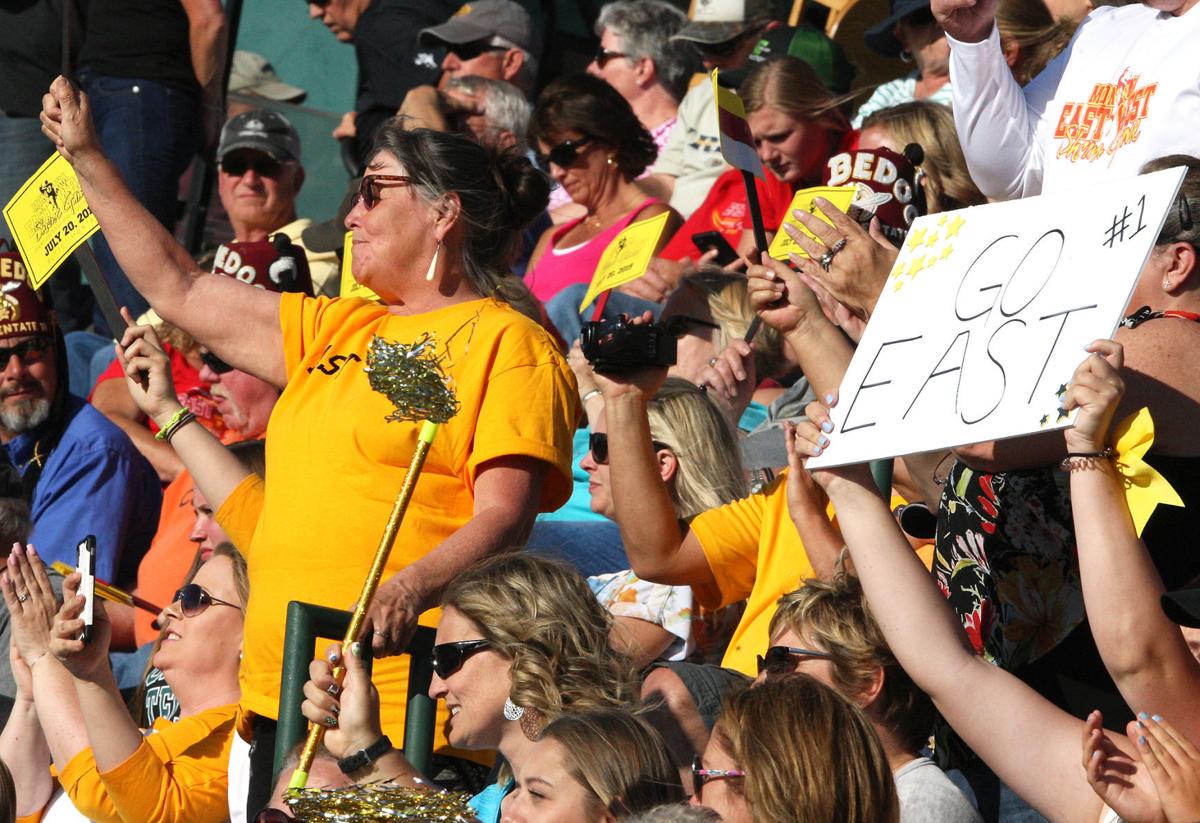 East Team fans cheer during player introductions prior to the start of the 73rd Montana East-West Shrine Game on Saturday at Montana Tech's Bob Green Field. 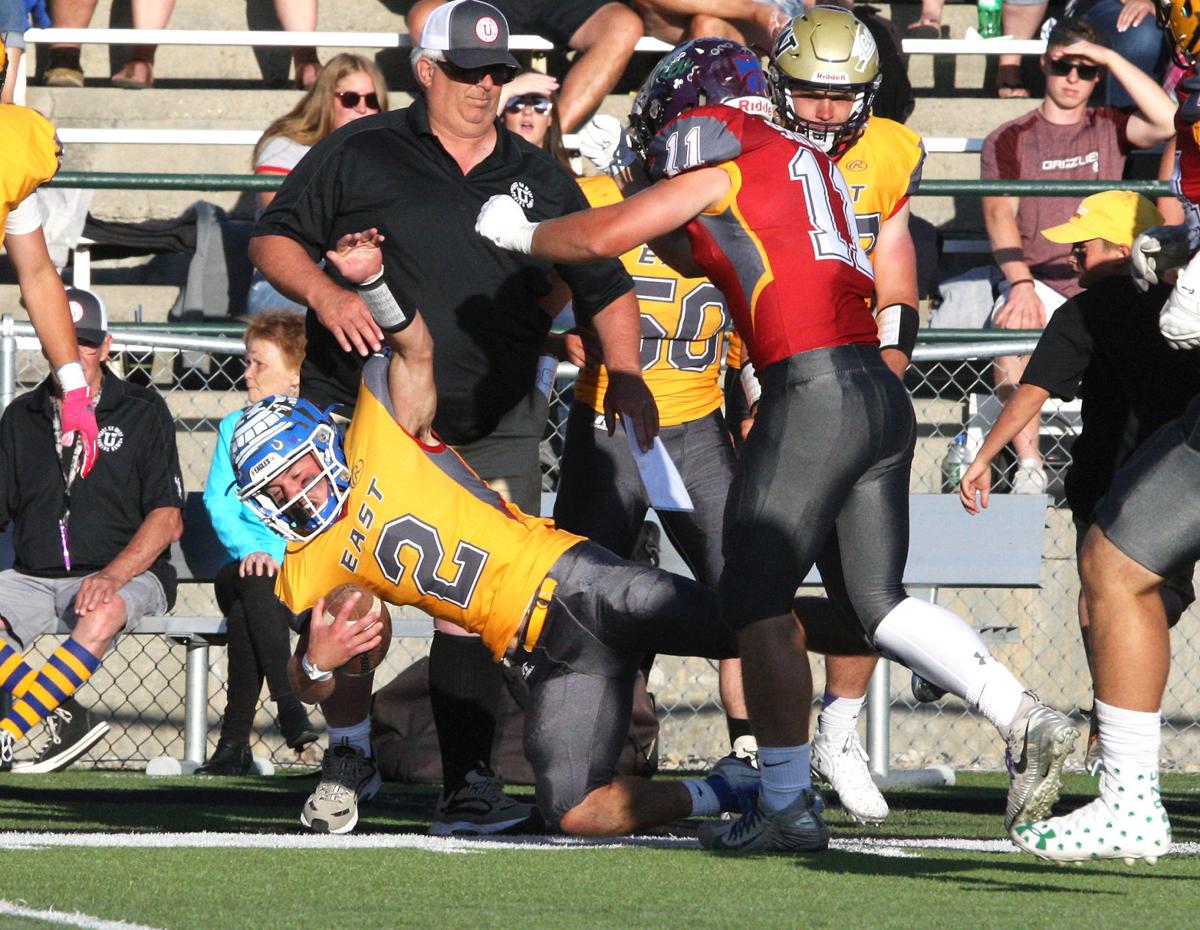 East Team's Ryder Meyer, a Fairfield graduate, is knocked out of bounds by Charlo's Landers Smith during the East-West Montana Shrine Game on Saturday at Montana Tech's Bob Green Field. 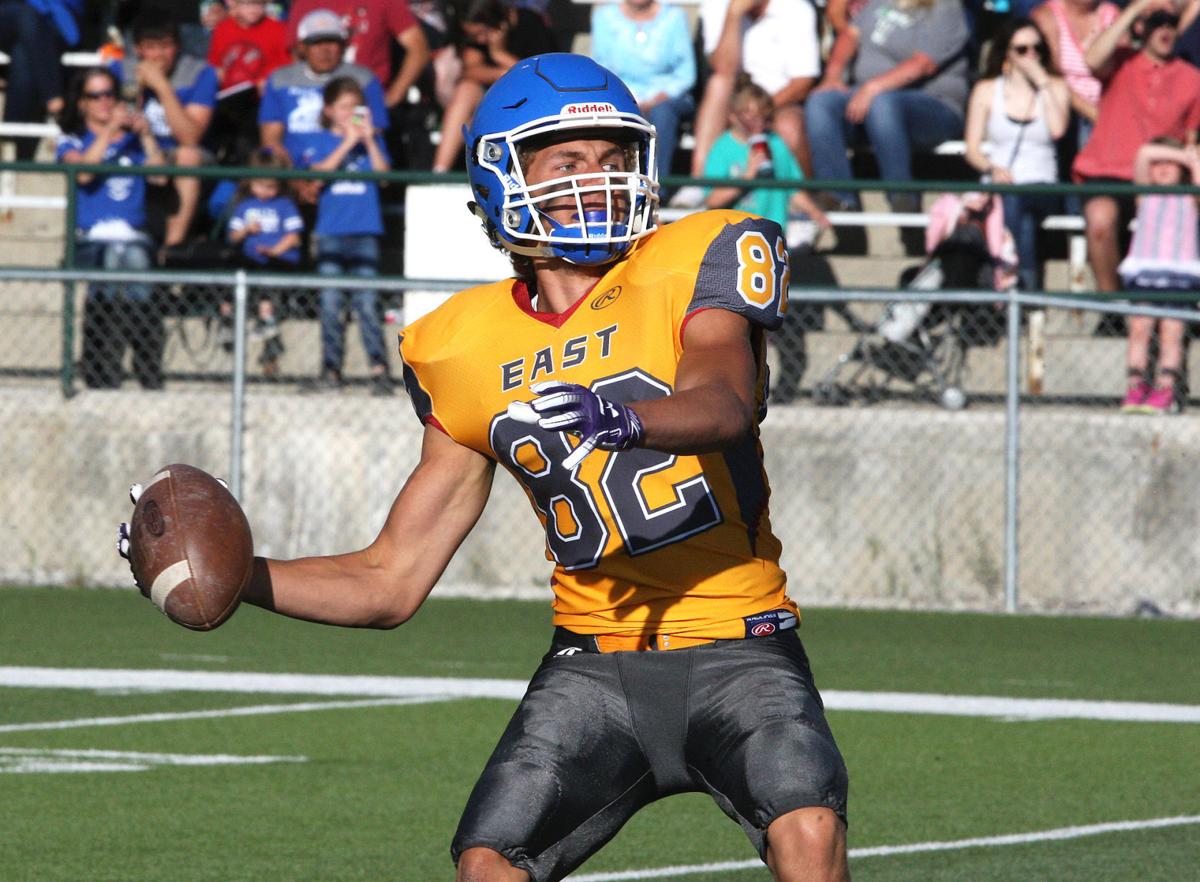 East Team's Dawson Allen of Fairfield drops back to pass during the 73rd East-West Montana Shrine Game on Saturday at Bob Green Field. 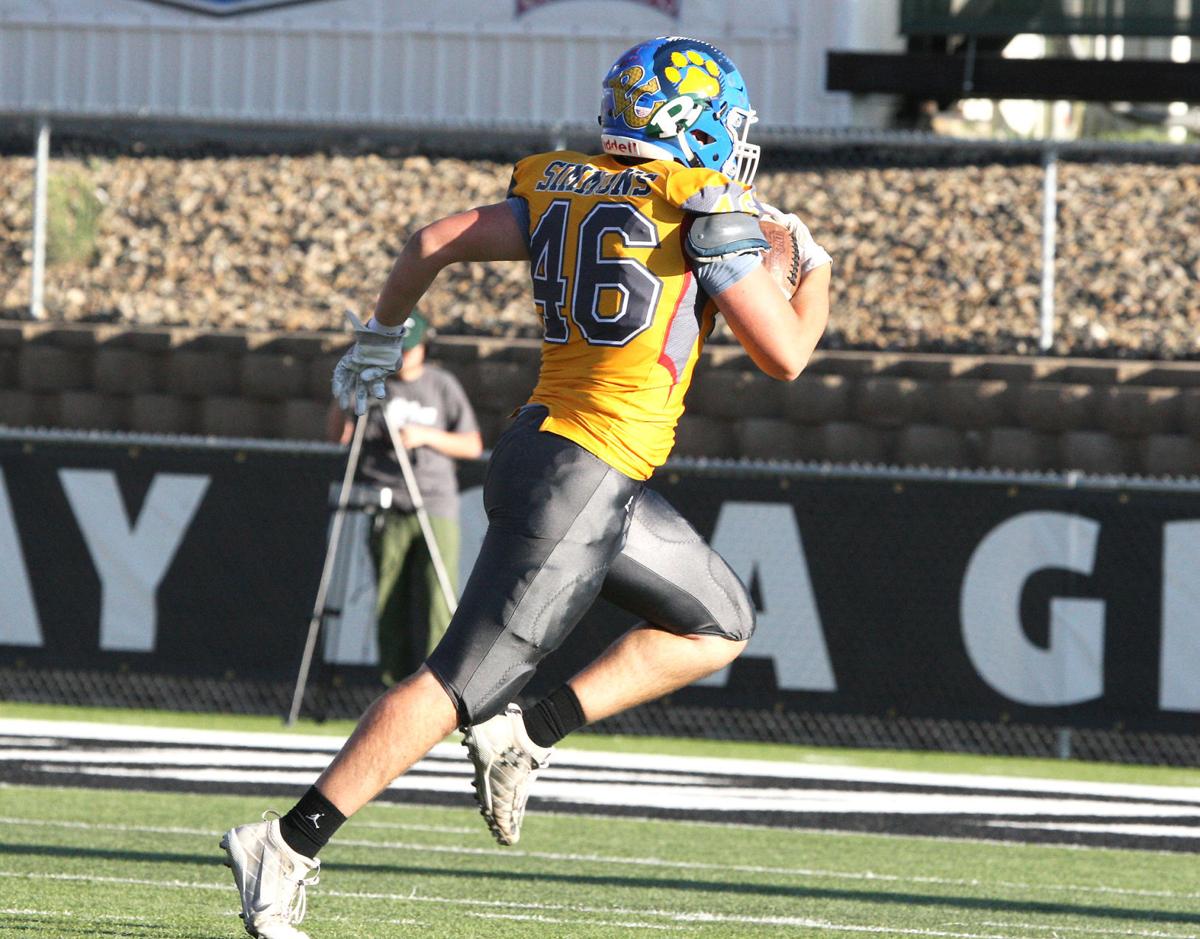 Derek Simmons, a Fairfield graduate, bolts towards the endzone during a 44-yard catch and run from Mitchell Norslien during the East-West Montana Shrine Game on Saturday at Montana Tech's Bob Green Field. 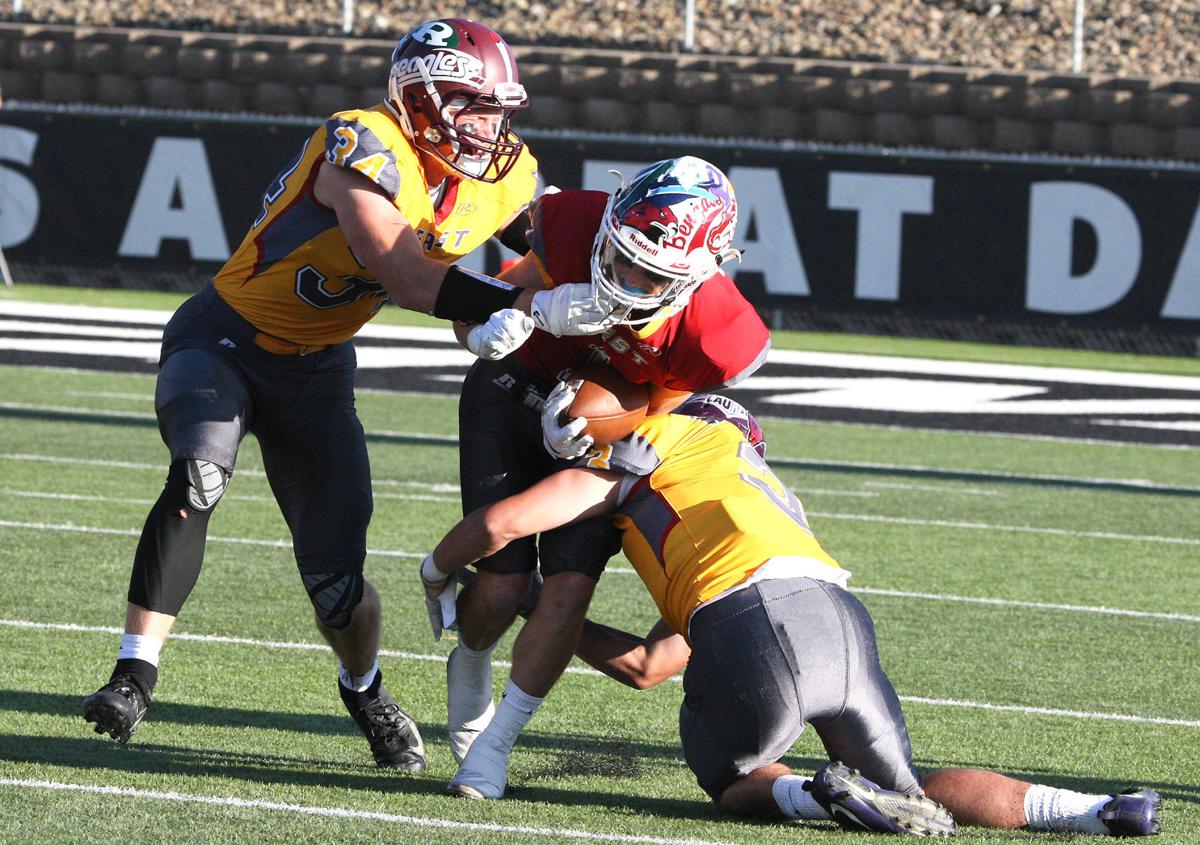 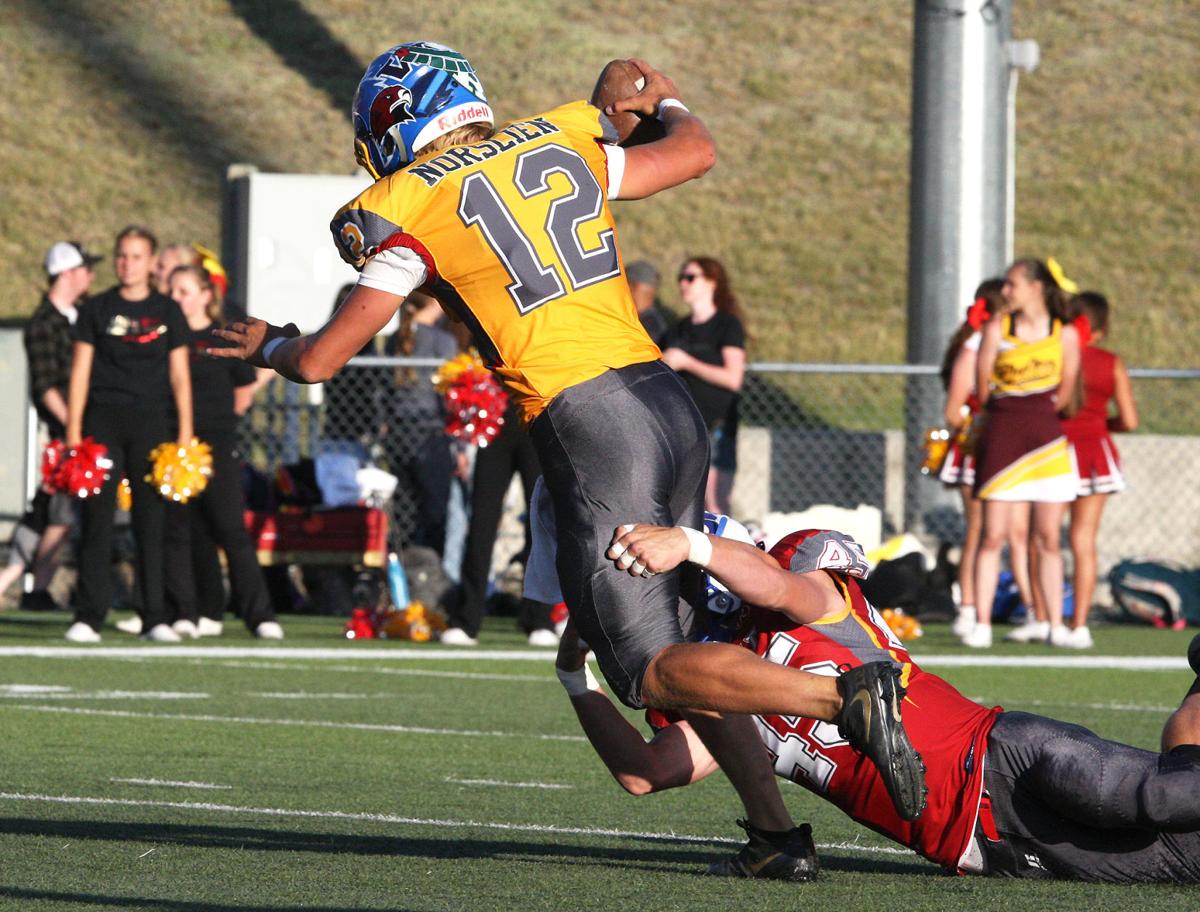 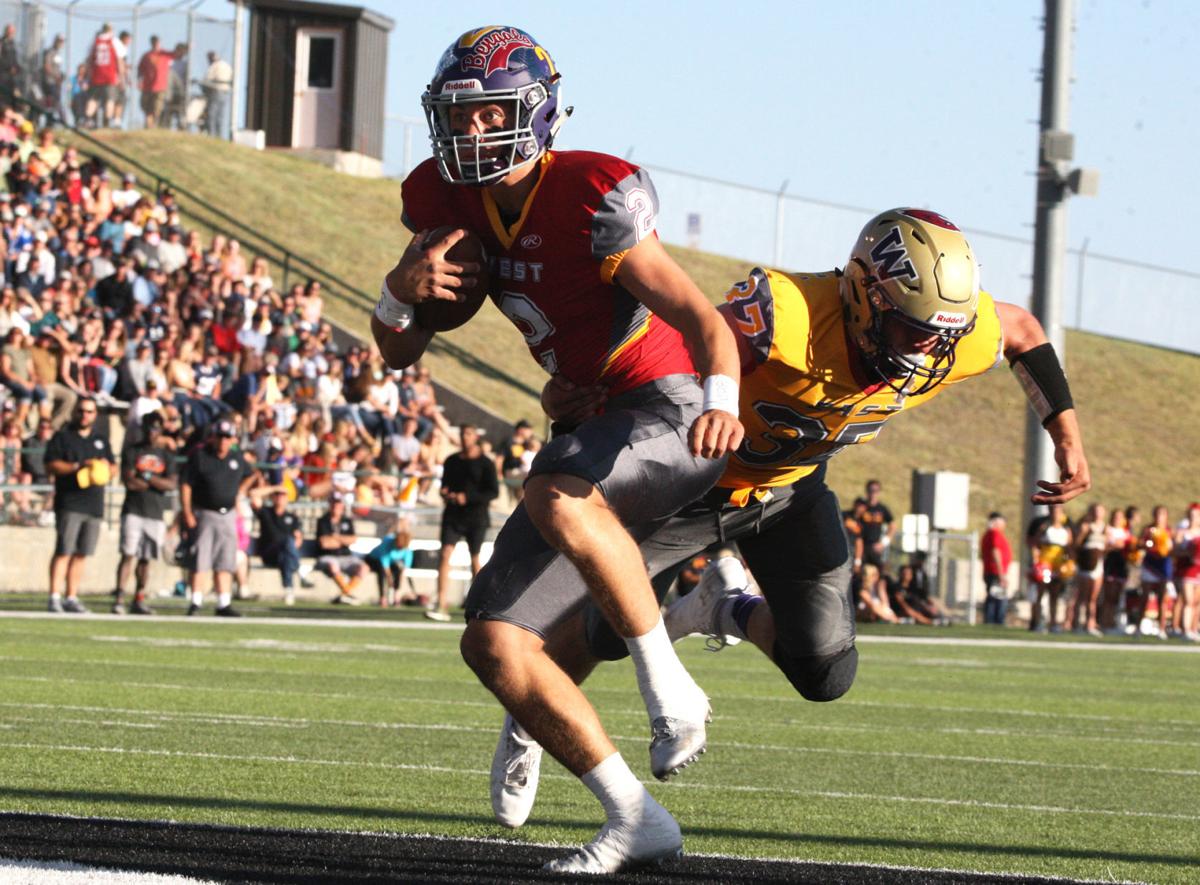 East Team fans cheer during player introductions prior to the start of the 73rd Montana East-West Shrine Game on Saturday at Montana Tech's Bob Green Field.

East Team's Ryder Meyer, a Fairfield graduate, is knocked out of bounds by Charlo's Landers Smith during the East-West Montana Shrine Game on Saturday at Montana Tech's Bob Green Field.

East Team's Dawson Allen of Fairfield drops back to pass during the 73rd East-West Montana Shrine Game on Saturday at Bob Green Field.

BUTTE — When Derek Simmons woke up Saturday morning, he was not expecting to catch two critical touchdowns in the East-West Shrine Game for the East team.

Nor did the Fairfield product expect to win East offensive MVP awards. But he did both of those things as the East held off a late West rally to win 28-22. East quarterback Mitchell Norslien, who slung three touchdowns, took the overall honors for the game.

“It was amazing being able to play in this game, let alone catch a couple touchdowns,” Simmons said. “It was awesome.”

Simmons first touchdown catch was a 44-yarder in the first quarter that gave the East team a lead it would never relinquish. It was a huge momentum play too. The West had just gotten a stop, but fumbled the ensuing punt return, setting the East up in West territory.

Fellow Fairfield alum Ryder Meyer added a touchdown run in the second quarter to push the score to an eight-point lead. Simmons then added his second scoring catch in the third quarter, on a picture-perfect quarter-opening drive.

“We felt a rhythm on that drive, lineman were blocking and receivers were running good routes and catching the ball,” Norslien said. “Everyone was kinda just feeling the rhythm and helping me out.”

It took some time for either team to find any sort of offensive rhythm, but the West side was able to score 13 unanswered points in the third and early fourth quarters.

The second touchdown came after a long Landers Smith run on a fake punt, which helped bring another boost of needed momentum back to the West side. After trading a few punts, however, the East was able to score on a 39 yard pass from Norslien to Meyer, giving them a 28-19 lead with six and a half minutes left in the fourth.

It was a gut punch for the West, who did manage to score on a 41-yard Carver Gilman field goal, but could not corral the ensuing onside kick.

“You’ve got to slow down and execute and we were over playing, pressing a bit and trying to do too much,” West team head coach Mike Cutler said. “That was why my message at half time was that we just need to slow down. I was okay with where we were at halftime because it really couldn’t get any worse.”

Offensive miscues, missed passes and special team gaffs were also issues for the West team, who could find very little on offense early in the game. Ortt, a Montana State football commit, struggled at points during the game, though did put together an impressive drive late in the game.

East team defensive MVP and Billings West grad JJ Lindsay was a big part of the problem for the West team, as he harassed the quarterback and made a living in their backfield. The East was also able to mostly avoid giving up big plays, which was a crucial part of their win.

“I think that preventing big plays just comes down to technique and noticing the details,” Lindsay said. “If you can notice something that’s a little bit different and you can go prevent that, that’s really what counts.

“Just keeping focus throughout the entire game is what matters.”

The East, for the most part, were able to do just that and it gave them a 41-32 all-time edge in Shrine Game history. It also gave Fairfield players — who had a hand in every East touchdown scored — a game to remember forever.

“It was incredible, even being on the team and being able to play with my coaches and friends,” Simmons said. “It was just incredible.”

Longtime friends, rivals Les Meyer and Mike Cutler coaching against one another in Shrine Game