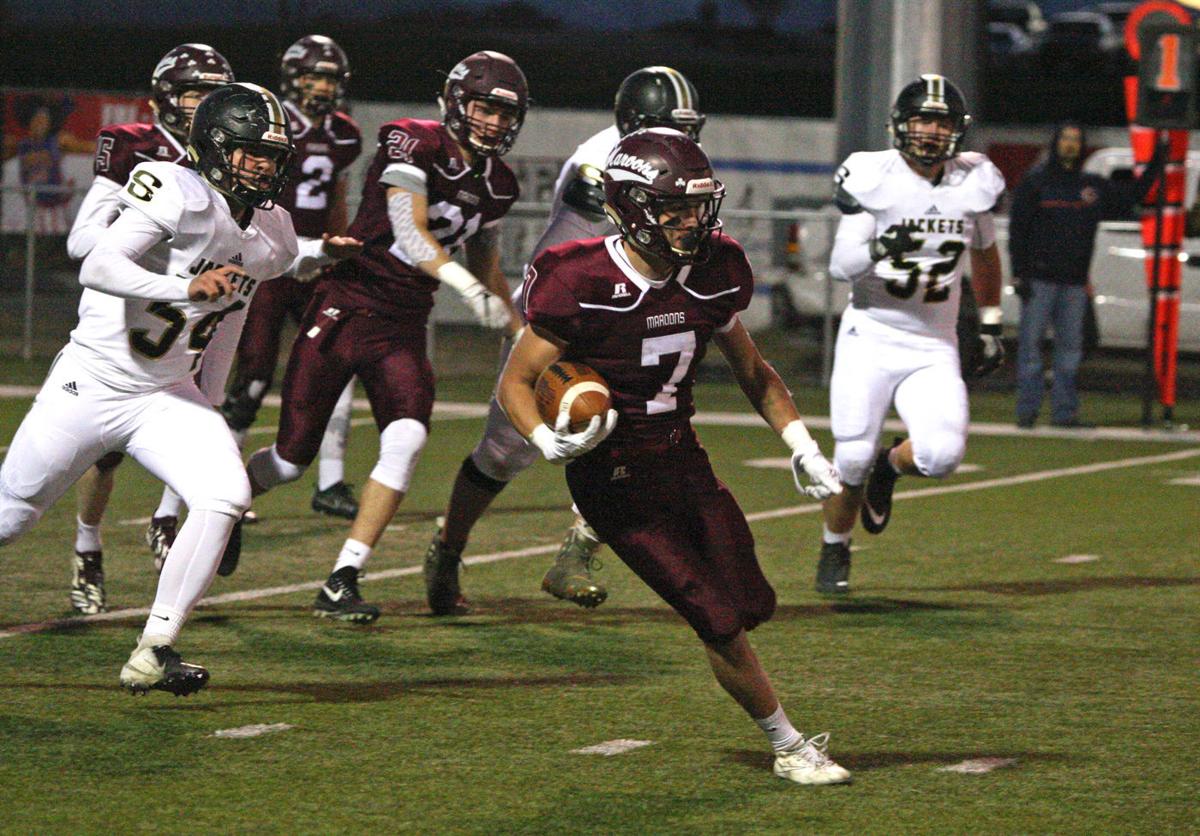 Butte Central running back Clay Fisher (7) rushes down the field on a 91-yard touchdown run during the first quarter of the Maroons' game against Stevensville on Friday at Montana Tech's Bob Green Field. 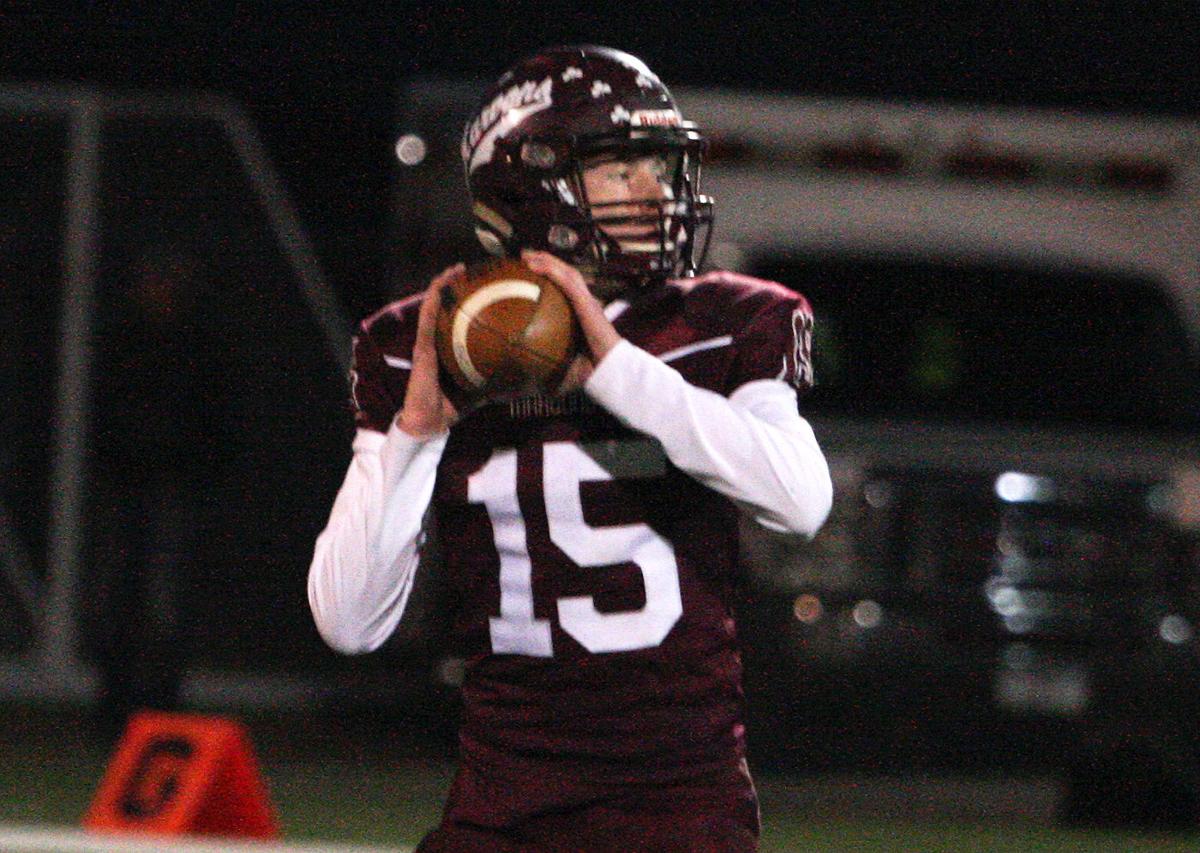 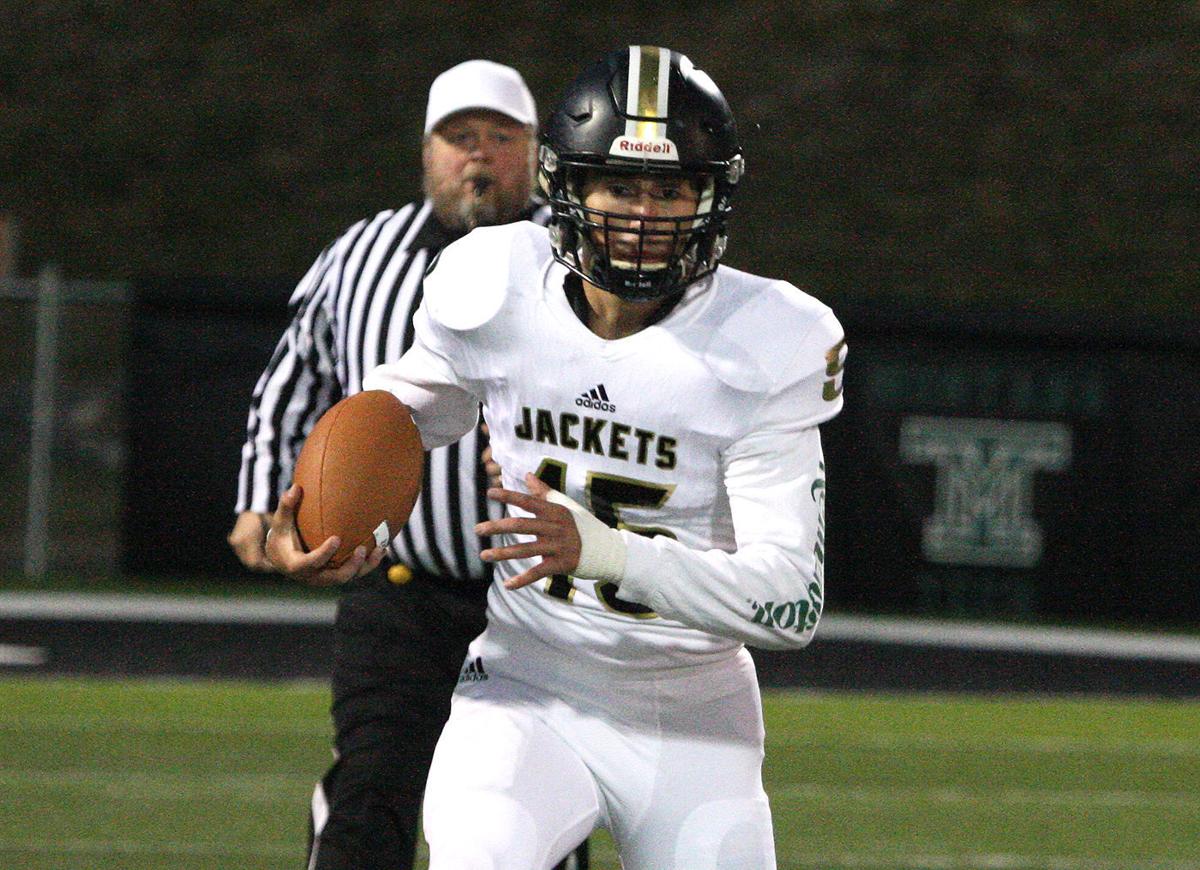 Butte Central running back Clay Fisher (7) rushes down the field on a 91-yard touchdown run during the first quarter of the Maroons' game against Stevensville on Friday at Montana Tech's Bob Green Field.

BUTTE – Butte Central hasn’t had the easiest go of it this season. A slew of injuries across the bulk of the campaign has left the Maroons out of bodies in close games as the final minutes ticked away.

But on Friday night, where a loss would have ended postseason hopes, a nearly fully healthy Maroons side got the opportunity to prove its mettle in a 54-14 blowout victory over Southwest A foe Stevensville at a cold and windy Bob Green Field.

It began early in the first quarter, when Guido Ossello came down with an interception, his first of two on the night.

The next play from scrimmage, running back Clay Fisher swung right, toed the sideline and went 91 yards for the opening score. He had another score of 89 yards and finished the night with 220 yards on nine carries.

“It was a good effort by our kids I thought, we’ve had a lot of adversity so it was great to be almost healthy,” Central head coach Don Peoples Jr. said, noting starting receiver Luke Jensen stayed out of the game with a lower leg injury suffered last week against Hamilton.

“I thought we did a lot of good things, we bent a little bit on defense, but we hunkered down a few drives they got deep in our territory. We executed our passing game well, and (Fisher) ran the ball great.”

Stevensville (2-6, 0-4) did not get on the board until early in the third quarter. A fumble recovery deep in Butte Central (3-4, 1-3) territory led to the Yellowjackets having a first-and-goal from the 6-yard line. The Maroons held through three plays, but on fourth-and-goal quarterback Payten Davids faked a draw and dumped a short pass to Jaren Gum for the score.

The Central defense didn’t crack again until late in the game with mostly reserves on the field. The defensive linemen tandem of Aaron Richards (one forced fumble) and Seth Gardner (one fumble recovery) caused havoc in Stevensville’s option-heavy backfield all night.

Meanwhile, Cade Holter looked to have found comfort behind center again in the win. He finished with four touchdown passes, including a strike of 77 yards, and topped it off with a 37-yard rushing score late in the game.

Favorite targets? Twin brothers Matt and Jared Simkins, who saw the field together Friday night for the first time this season.

Holter found Jared first for a 29 yard score with 10:30 left in the second quarter. Just over two minutes later, he hit Matt for a 19 yard touchdown.

Matt finished the game with three touchdowns caught, including a crossing route that went 77 yards in third quarter. Jared caught two, including a 58 yard touchdown from Thomas McGree while Holter sat out a few plays with a cramp.

“They’re two great kids, they really deserve it, and they’re just great athletes all around,” Holter said of his receivers. “They’ve got size, they’ve got speed; the best part about them is they’ll get open for you. And when they’re not, they go make a play. It’s great to have them on your side.”

“Great to see those guys, they’re so athletic and such a big target,” Peoples said of the Simkins brothers. “It’s the first time they’ve been together all year so that’s a great deal.”

For Holter, who sat out earlier in the year with a concussion, there’s a measure of confidence as the Maroons head to Corvallis next week in a win-or-go-home situation. A year ago, Butte Central beat the Blue Devils in the final week to get into the postseason. They’ll need to repeat the feat this year to play on.

And with most of the roster healthy, Holter and company like their chances.

“We felt good coming in. You win one like this it’s hard not to be excited, to have all this momentum going into next week,” the senior quarterback said. “Corvallis is a tough team, so we’re just going to play our best and try to pull out a win.”

Missed any of the action? Catch up with all our coverage of statewide high school football Oct. 11-13, 2018.