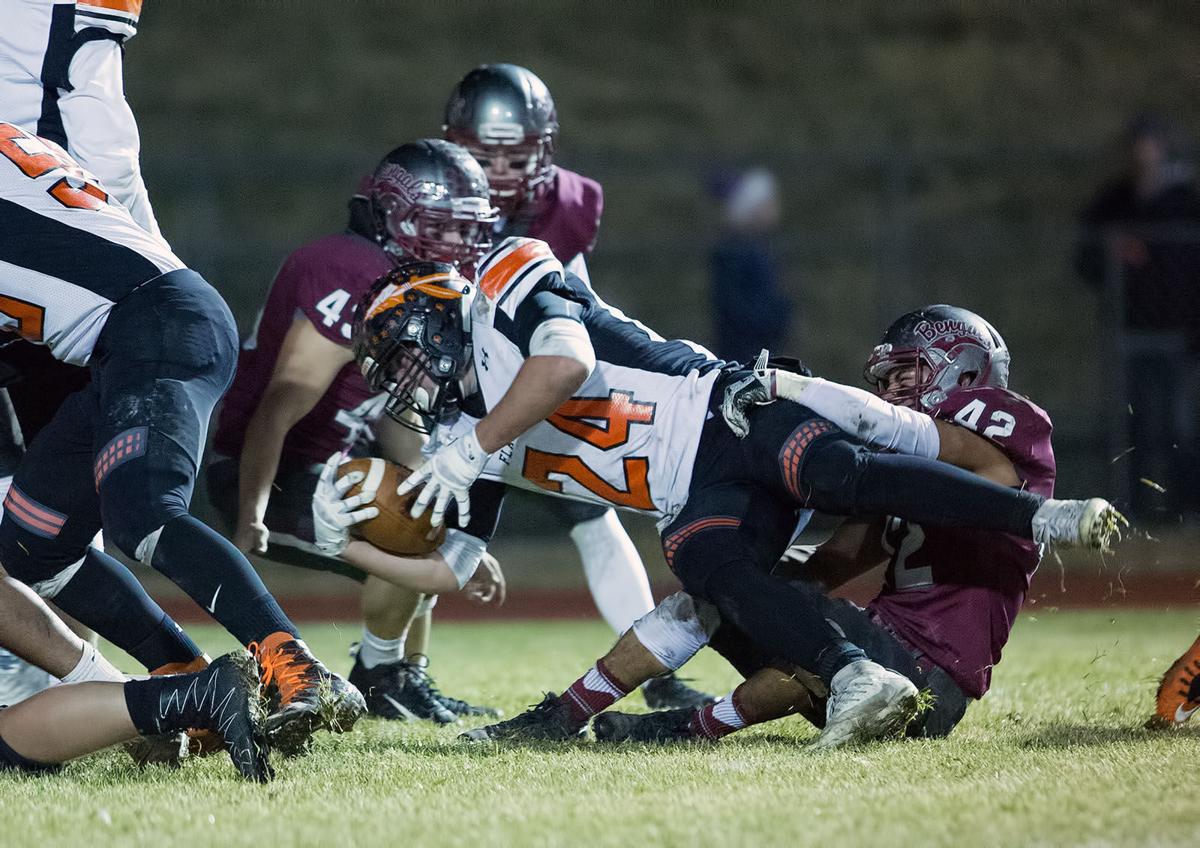 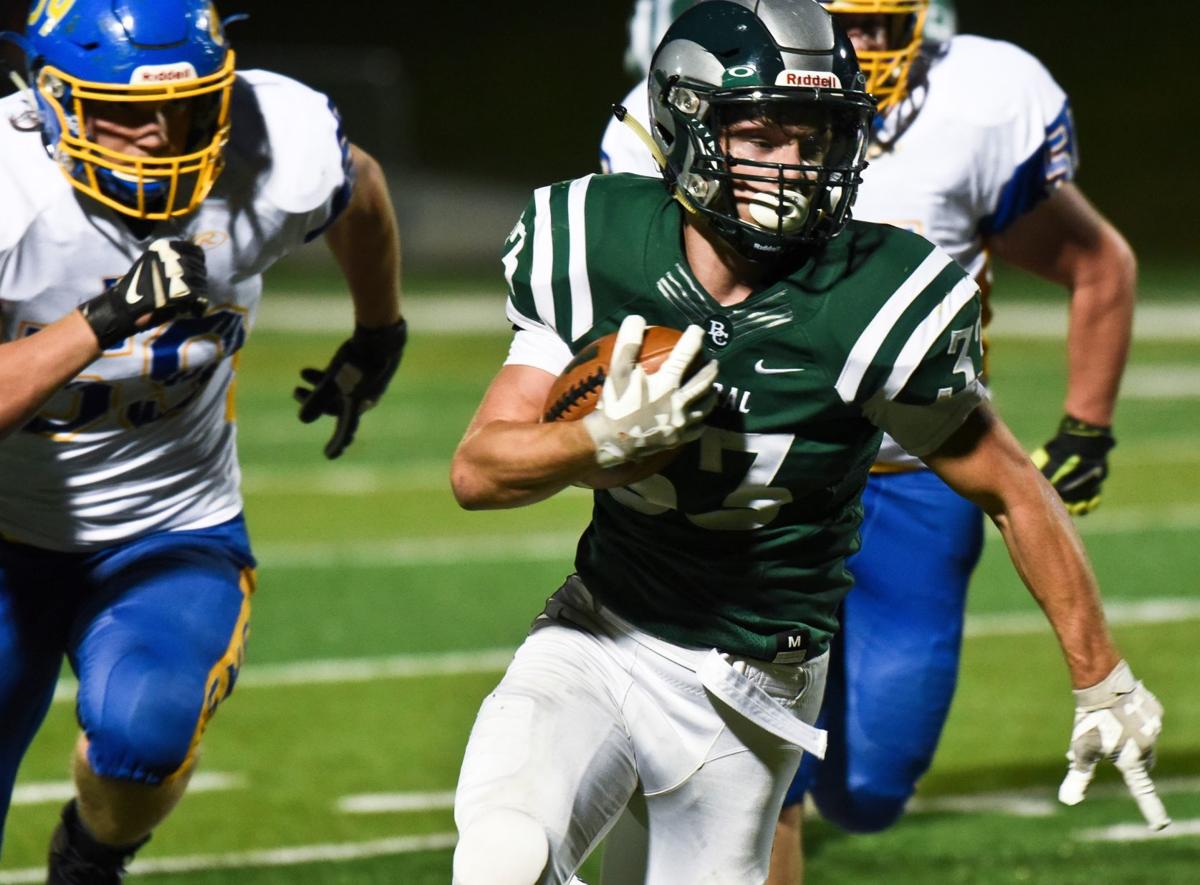 Billings Central's Jack Studer carries the ball during a 49-18 victory over Lewistown on Friday at Herb Klindt Field. The Rams visit the Laurel Locomotives on Thursday at the Laurel Sports Complex.

Billings Central's Jack Studer carries the ball during a 49-18 victory over Lewistown on Friday at Herb Klindt Field. The Rams visit the Laurel Locomotives on Thursday at the Laurel Sports Complex.

BILLINGS – With Week 8 of the high school football season in the books, here is a look at five of the best storylines from the weekend.

Kalispell Flathead’s Blake Counts has been having a season for the record books, quite literally.

On Friday night against Great Falls CMR, Counts surpassed former Flathead great Lex Hilliard’s school record for single-season rushing yards. Counts needed only 46 yards but ran for 203 en route to reaching 1,541 on year in just eight games. Hilliard, a former Montana Griz great who spent five seasons in the NFL, accounted for 1,384 rushing yards in 2000 to originally own the record according to Anthony Nachreiner, the host of The Nach on Sports show on KGEZ in Kalispell and the play-by-play voice of the Braves.

As one of the state’s top running backs, Counts has consistently led the Class AA all season long in rushing yards. According to Nachreiner, Friday’s game was Counts’ 12th in a row of rushing over 100 yards.

Counts, who has been a two-year starter for Flathead, also ran for a score in the game, a 38-9 win for Flathead. The Braves, ranked No. 4 in the most recent 406mtsports.com high school football rankings, improved to 6-2 on the season. Counts is up to 14 touchdowns on the season.

In his career, Counts has accounted for 2,803 yards and 20 touchdowns on the ground, while catching 20 passes for 357 yards and six more scores. He has five career games over 200 yards.

So at this rate with two regular season games left and at least one more playoff game on the horizon for Flathead, expect Counts to rewrite those record books even more.

The last regular season week of football is here for every classification but Class AA. And Class A will play host to a pair of games that could decide who walks into the postseason with the top seeds.

No. 1 Hamilton improved to 8-0 with a shootout 62-42 win over Frenchtown on Friday night. The Broncs host No. 5 Dillon in a battle for the Southwest A crown this week. Both teams sit at 4-0 in the conference, while Dillon is 6-1 overall, its lone loss to Columbia Falls. The Beavers most recent win was over Corvallis 39-18. The top seed will earn a bye into the first week of the postseason. Meanwhile, defending Class A champ and No. 3 Columbia Falls (6-1) will be the top seed from the Northwest A.

In the Eastern A, No. 2 Billings Central (8-0), fresh off of a 49-18 victory over Lewistown (6-2), now has to get past rival and fourth-ranked Laurel (7-1) for its final hurdle to a perfect regular season. The Locomotives' lone loss came at the hands of Miles City, 21-20, in Week 2. Laurel has since won six straight and soundly defeated Hardin over the weekend 39-0. The winner will get the top seed, but regardless of the outcome, both schools have locked up the top two seeds in the Eastern A and a first-round bye in the playoffs.

For the second time this year, the top team in the Class B rankings has fallen.

Top-ranked Bigfork was upended by No. 5 Missoula Loyola 26-21 on Friday night. In a back-and-forth contest, Loyola jumped to a 13-0 lead in the first quarter thanks to a touchdown connection between Nick Mitzel and Cooper Waters. Bigfork responded with two touchdowns between quarterback Anders Epperly and Luke Schmit. However, Mitzel ran for a score in the third quarter and Ryan Tirrell added another in the fourth to hold off the Vikings.

The win gives Loyola the Western B conference championship and they will be a No. 1 seed heading into the postseason.

Keep an eye out for Monday’s new 406mtsports.com rankings as there will surely be some major shifts and a new top-dog.

It was a melancholy week for the Darby Tigers.

On Wednesday morning, Darby lost Jake “Sunshine” Sanders to Non-Hodgkin’s T-cell Lymphoma. The community and team has been mourning the loss of one of their own ever since.

Two days after the news broke, Darby was scheduled to play against No. 6 Charlo, but the Vikings forfeited due to player suspensions and not having enough players to field a team. Because of that, the Tigers jumped to 4-4 and might have a chance to sneak into the 8-Man playoffs as the No. 4 seed from the 8-Man West.

According to Kyle Houghtaling of 406mtsports.com and the Ravalli Republic, Darby would go on to compete in a light-hearted scrimmage amongst themselves the rest of the evening. The team and those in attendance honored Sanders at halftime by dimming the entire stadium and lighting sky lanterns that they sent off into the night.

Sports bring people together in times of joy and sadness. And when the game is done, life outside the lines is more important, something, in one gesture, the Tigers reminded us of Friday night.

In other 8-Man news, the 8-Man North has almost been completely set in terms of playoff seeding. No. 2 Shelby topped No. 4 Great Falls Central 34-0 in a battle between the top teams from each sub-division. Shelby (7-0), the top team in the B Sub-Division, will enter the postseason as the No. 1 seed, while Great Falls Central (7-1), the A Sub-Division’s best team, will be No. 2. Then, the No. 2 seeds from each sub-division played the No. 3 seeds from the opposite divisions to decide the next two seeds. So, Centerville (7-1) will be the No. 3 seed heading into the postseason after beating Chester-Joplin-Inverness 32-8. Choteau (6-2) defeated Chinook 58-8 to secure the No. 4 seed. So essentially, the 8-Man North’s playoffs have already started.

Because the 8-Man North will have five representatives this year, CJI (5-3) and Chinook (4-4) will each have one more chance to qualify for the postseason as they will play later this week.

6-Man: Clash in the South

The top seed for the 6-Man South will be up for grabs on Saturday.

Roy-Winifred defeated Bridger 42-37 on Friday night to improve to 8-0. That sets up a compelling matchup with No. 3 Grass Range-Winnett (9-0) for the conference championship in the 6-Man South.

A conference that has been snake-bitten by multiple forfeitures, Saturday’s matchup between the Rangers and Outlaws should provide a bright spot in a marquee game with home field advantage on the line.

Extra point: What to watch for

Kalispell Glacier started the year 1-5, but has won two in a row to improve to 3-5 and will visit Missoula Big Sky (2-6) on Thursday night to try and take one more step towards a postseason appearance. The Wolfpack then end their season at Missoula Hellgate (2-6). Last season, Glacier started the campaign 0-4 before finishing 4-5 in a frantic end to the season, just missing out on the Class AA playoffs. Great Falls (4-4) will host Bozeman (8-0), while Missoula Sentinel (4-4) welcomes Helena (6-2).

Aside from Central-Laurel and Hamilton-Dillon, clashes between Whitefish (5-3) and Libby (4-4) and Butte Central (3-4) and Corvallis (4-4) will occur in Class A.

Five storylines from Week 7 of the high school football season

BILLINGS – With Week 7 of the high school football season in the books, here is a look at five of the best storylines from the weekend.