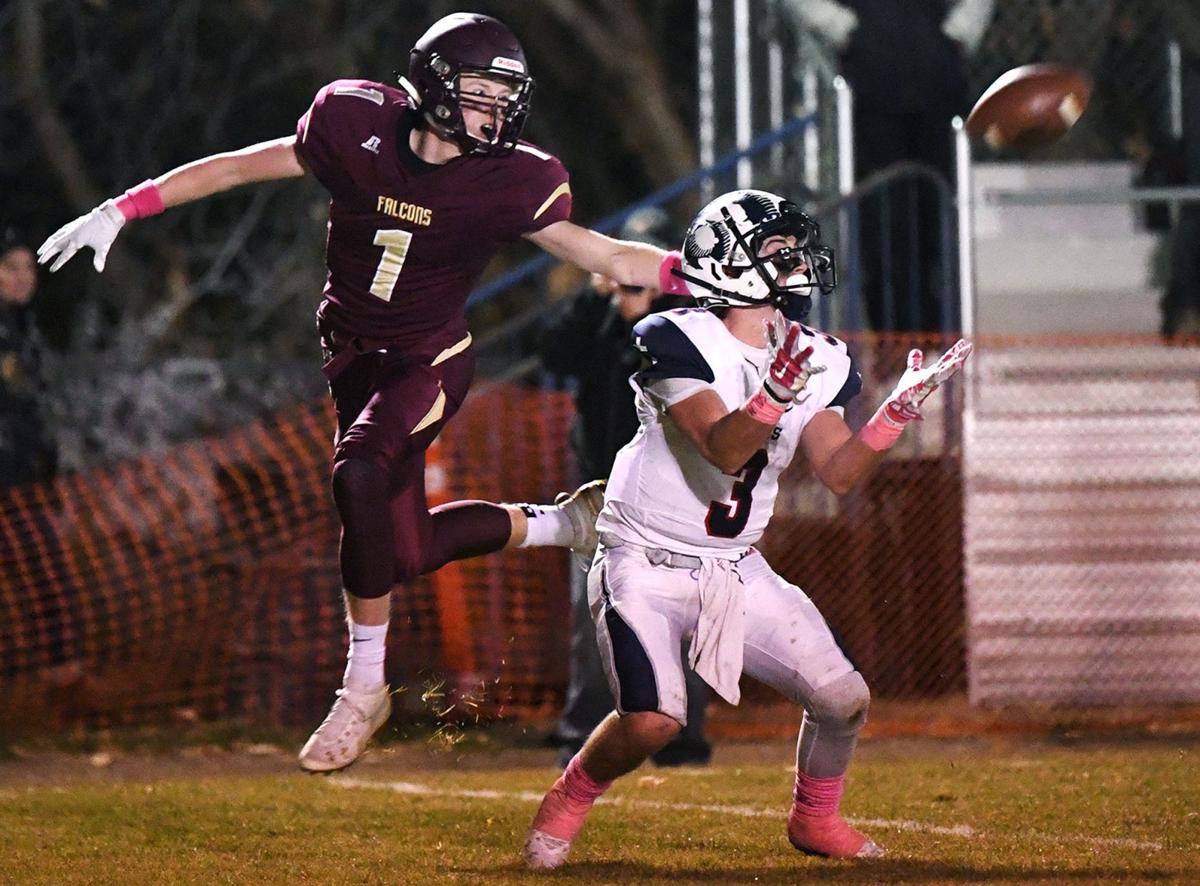 Florence's Levi Posey, left, looks on as Loyola Sacred Heart's Nick Mitzel eyes the ball before making an interception in the third quarter. The Falcons beat the Rams 39-21 on Friday night at Rollin Field. 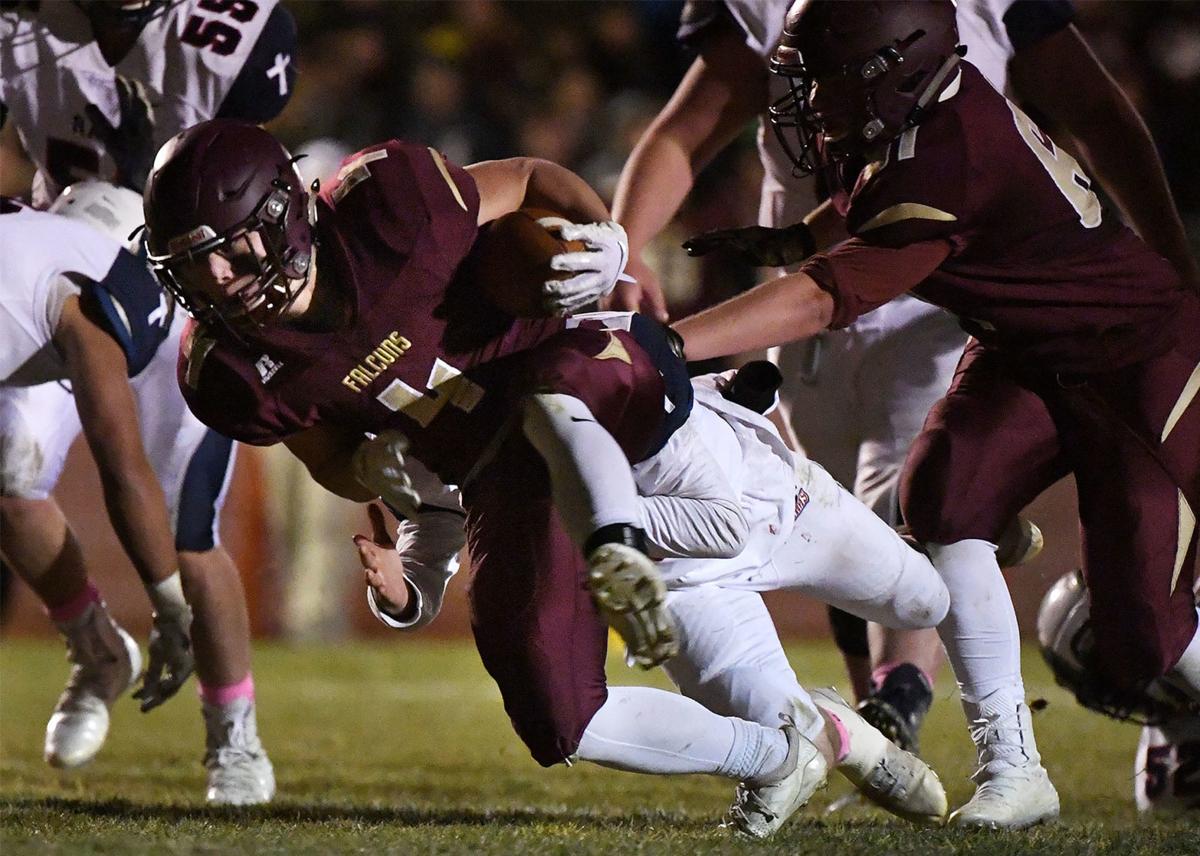 Florence running back Eli Christianson works for yardage in the first half. 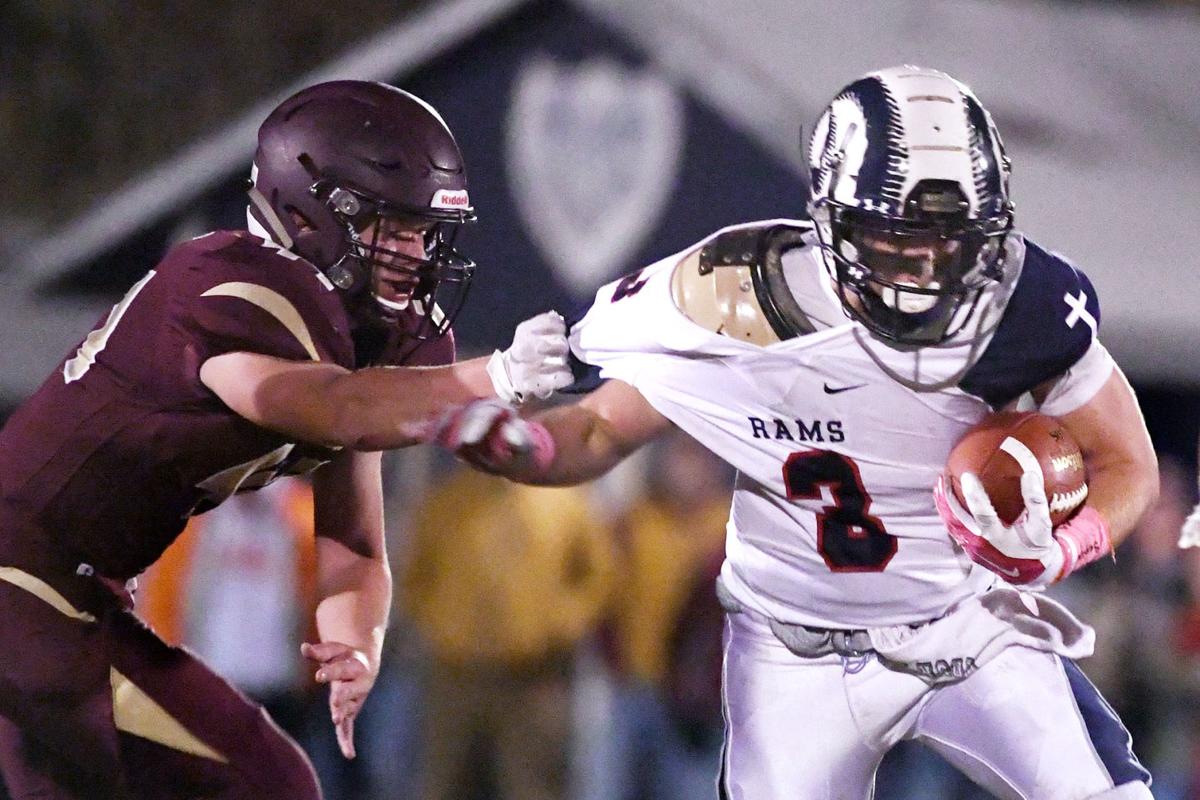 Florence's Luke Maki tries to tackle Loyola's Nick Mitzel in the first half. The Falcons closed the first half with a Hail Mary touchdown pass, sparking a 39-21 win against their longtime rival. It was the first time in 17 years Florence has beat Loyola.

Florence's Levi Posey, left, looks on as Loyola Sacred Heart's Nick Mitzel eyes the ball before making an interception in the third quarter. The Falcons beat the Rams 39-21 on Friday night at Rollin Field.

Florence running back Eli Christianson works for yardage in the first half.

Florence's Luke Maki tries to tackle Loyola's Nick Mitzel in the first half. The Falcons closed the first half with a Hail Mary touchdown pass, sparking a 39-21 win against their longtime rival. It was the first time in 17 years Florence has beat Loyola.

MISSOULA — One un-timed play paved the way for Florence's breakthrough 39-21 win Friday night. It was the kind of play that can wash away nearly two decades of frustration.

A costly personal foul penalty by Loyola Sacred Heart extended the second quarter and Florence seized the halftime lead on a Hail Mary pass from Colby Kohlman to Blake Schoupe that initially bounced off the hands of a Rams defender. The touchdown gave Florence a 12-7 lead at the break.

And it gave the Falcons a spark they've been searching for against Loyola for 17 years.

"...It was like a Florence miracle I guess," said Kohlman, who was hit on the throw. "Everyone was just so hyped (in the locker room at halftime). The momentum had turned to us and we just figured we're right there, we've got the game now."

"At first I thought it was an interception and I saw it bounce off his hands and Blake caught it and I was just going crazy," Shved said. "I was like, 'This is it, this changes the game. We got this.'"

The Falcons kept the momentum through the third quarter in building an 18-point advantage, then held off Loyola's late surge at Rollin Field in Missoula. It marked the first time since 2002 that eighth-ranked Florence was able to beat its sixth-ranked Class B rival.

Kohlman led the way for the Falcons (5-2 overall). He threw for four touchdown passes, 282 yards, and he added two rushing touchdowns plus another 57 yards on the ground.

Loyola (4-4) struck first, though, with Keenan Russell throwing an 18-yard TD pass to Cormac Benn early in the second quarter. Florence answered 22 seconds later on a Kohlman 29-yard TD pass to Shoupe, but the point after was blocked.

The Rams led 7-6 when time ran out in the half, but they were flagged for hitting Kohlman out of bounds, giving the visitors once last play from the Loyola 39-yard line. The Falcons pounced with a 39-yard pass by Kohlman that went through the hands of Benn and into the hands of Shoupe in the end zone.

Shoupe, a sophomore, finished 135 yards receiving and three touchdowns. His second of the game serving as his team's second-half catalyst.

"All the coaches were ecstatic. I guess it was the first time (in a while) we've went into halftime leading Loyola," Shved said.

The Falcons carried that energy out of the locker room as they scored on their first two possessions of the second half. Kohlman struck paydirt on a 7-yard run and later hit Shoupe on a 62-yard TD pass.

Loyola switched quarterbacks late in the third quarter and Nick Mitzel was an instant success for the hosts. He hit Basil Coutinho for a 27-yard TD pass early in the fourth quarter that cut Loyola's deficit to 25-14.

Mitzel threw a costly interception on Loyola's next possession, though. Florence took over at the Rams 15-yard line and scored immediately on a Kohlman run.

Mitzel threw a TD pass to cut Loyola's deficit to 32-21 with 5:11 left. Loyola then recovered an onside kick and drove all the way to the Florence 8-yard line before a fumbled snap ended the drive.

Florence added an insurance touchdown down the stretch when Kohlman hit Jacob Round for an 87-yard strike. The senior wide receiver finished with three catches for 108 yards and the score.

With the win, Florence — which plays Three Forks in a nonconference game to close the regular season next Friday — locked up Western B's No. 2 seed to the playoffs assuring a home playoff game on Nov. 2.

The Ravalli Republic contributed to this article

Playoff seeds are up for grabs. See what you may have missed from week 8.