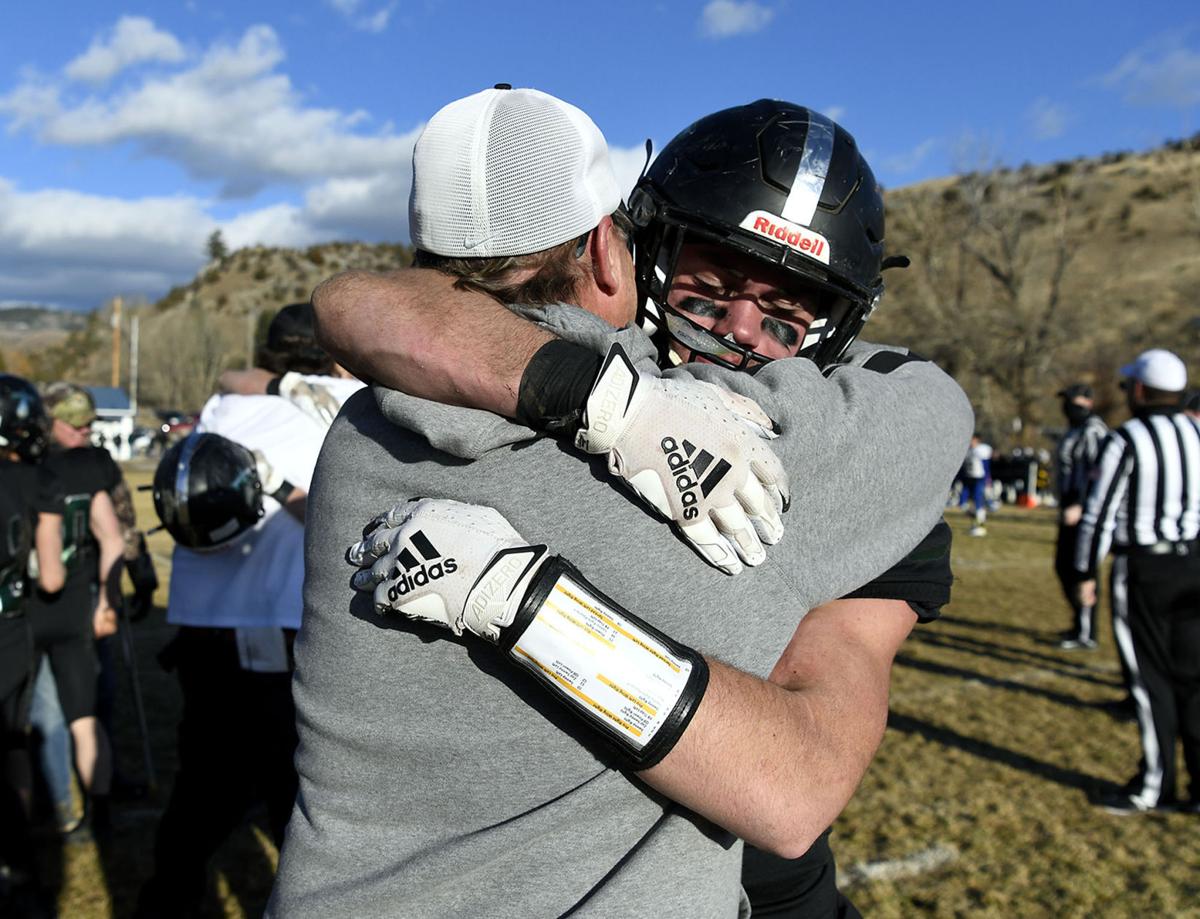 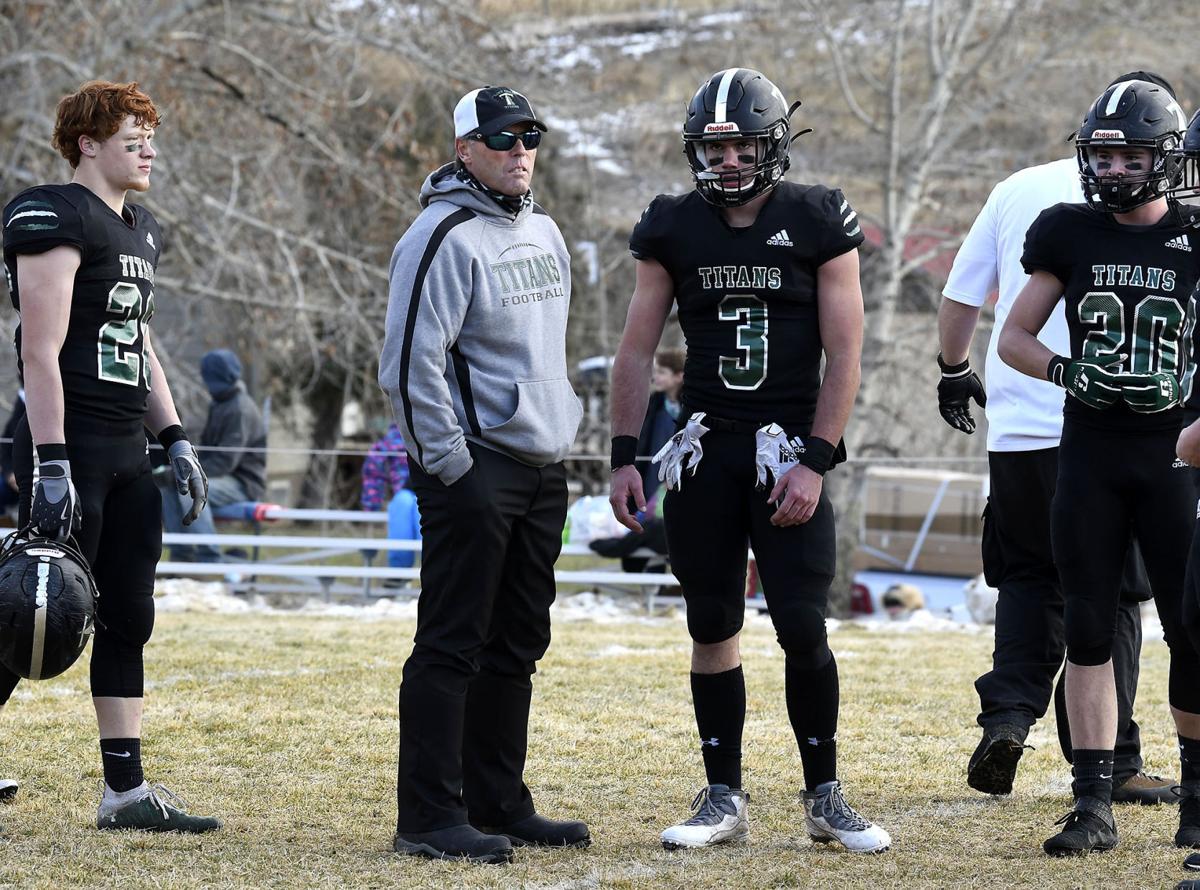 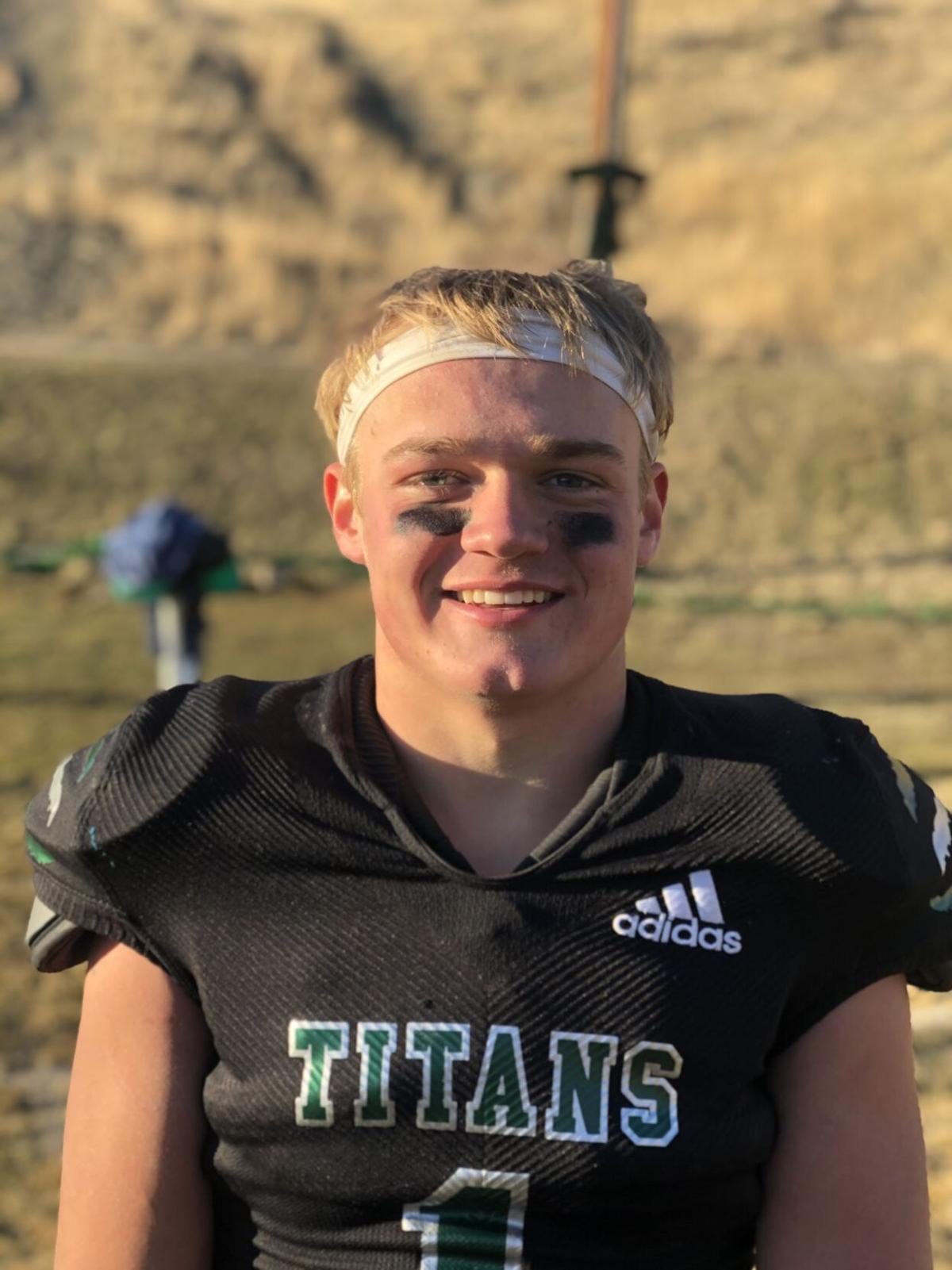 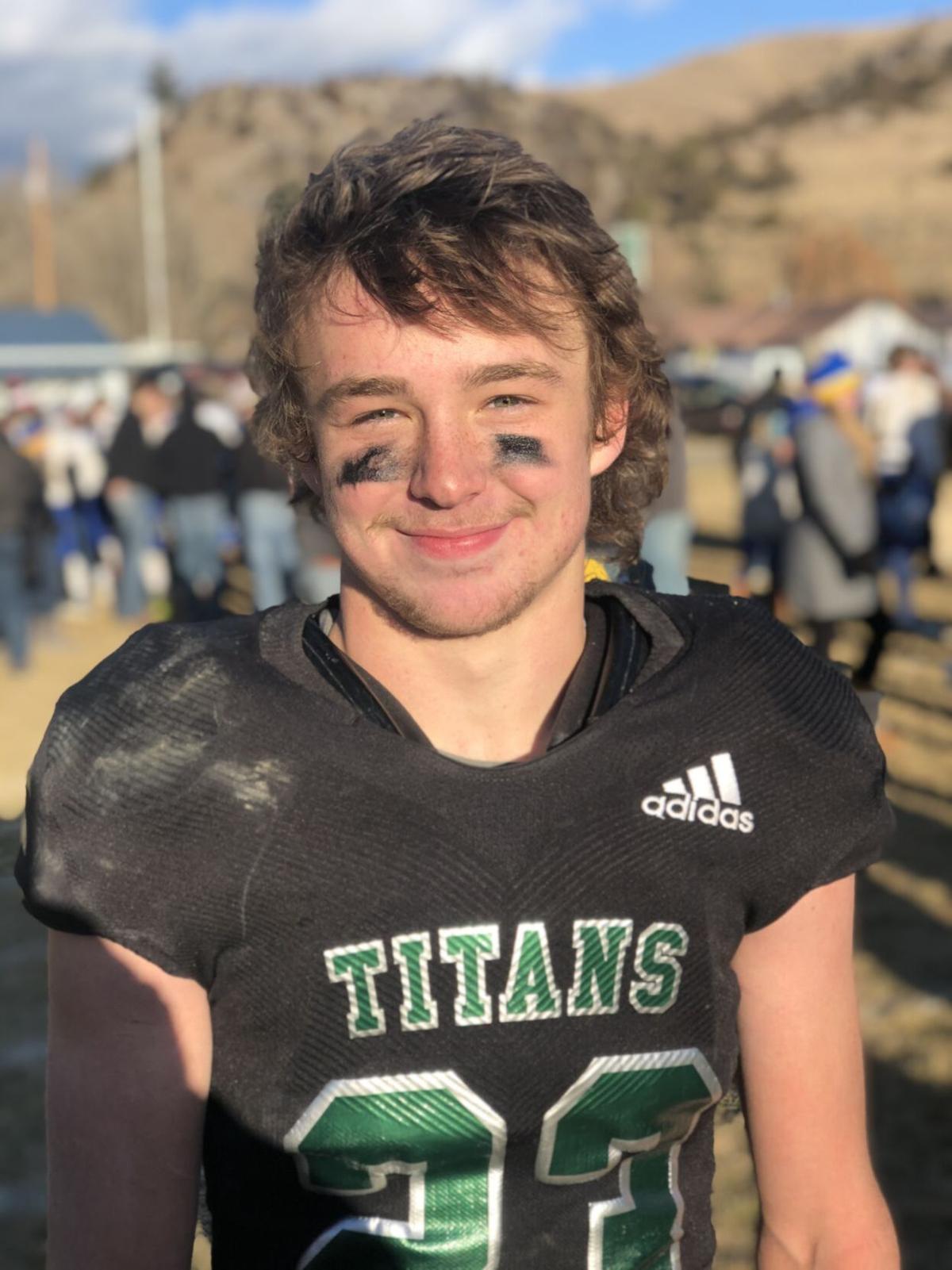 Mike, the Flint Creek head coach, and Kade, his son and quarterback, navigated themselves to one another through the mass of celebrating football players after Kade took a knee in the victory formation to seal the state title.

They wrapped one another in a big bear hug near the numbers on their side of the field. It was one of those hugs that they never wanted to end.

“That hug he just gave me about 20 minutes ago, last one, kind of means a lot,” Kade said.

“It was awesome. I’ll remember that (hug) forever,” Mike said, holding back tears and taking a moment to compose himself. “Yep.”

Mike and Kade had just finished their final high school football game together, and they went out on the highest of highs.

Mike retires from coaching having won three championships in his four years at the helm of the Drummond-Philipsburg co-op while posting a 44-4 record with three undefeated seasons. The Titans won the first title game in Philipsburg, the third one in Drummond and the middle one in Butte.

Kade, who will play football at Montana State, played in all three phases of the game over the years. He was a starter during the 2018 and 2020 title runs as well as a quarterfinal finish in 2019 after he served as a backup when he was a freshman during the 2017 championship.

“It’s special to be a part of something like this with my son,” Mike said.

“That’s pretty special to me,” Kade agreed. “My dad has made me the man and the player and the person I am today along with my mom. He means a lot to me. Unexplainable.”

He expanded on that: “Just everything he taught me, it’s a long list. I wouldn’t know where to start. Just all the lessons he’s taught me.”

To get here, they had to navigate the delicate balance of their relationships as father-son, coach-player and head coach-quarterback.

“Me and my dad both kind of had troubles balancing the coach-player and father-son at home,” Kade offered. “Sometimes we’d take practice home with us, both of us would. And once we figured that out, we got it down.”

“He was just great,” Mike said. “He treated me as the coach. I treated him as a player. We made a decision long ago that I wouldn’t coach him at home.

“If I could give any advice to other coaches out there that are coaching their sons or daughters, it’s leave it on the field or the court, let them be your sons and daughters at home. I think we’ve done a pretty good job of that. I’m sure proud of him.”

In sync, they made magic on the football field as Kade played quarterback, defensive back, kick returner and punt returner. With their time together on the field done, Mike will get to watch his son play at Montana State, an opportunity that played into his decision to retire.

“When Kade makes plays, it doesn’t necessarily surprise me,” Mike said, “but I get caught up in the moment with coaching, and I’m like ‘Did he just do that?’ He’s a special kid, a special football player, and I’m excited to watch him at the next level.”

‘Coach of the year’

Saturday also marked the final high school game for assistant coach J.C. Holland, who is retiring from coaching, according to Mike Cutler.

Holland, 51, had continued to coach despite being partially paralyzed and confined to a wheelchair in 2014. It was the result of a motorcycle accident that left him with a broken collarbone, four broken ribs, a broken ankle and a broken back.

“My best buddy, J.C. Holland, it’s his last game, too, and I couldn’t be prouder of him,” Mike Cutler said. “He’s been through a lot. To me, he’s the coach of the year. He deserves that. He’s one hell of a football coach.”

Kade felt the transition to playing for his father was helped by getting to also play for Holland.

Mike, who took over as head coach in 2017, and Holland had previously been rivals on the field, with Cutler at Philipsburg and Holland at Drummond before the co-op was formed in 2014. Holland leaves having been on coaching staffs at Drummond or Flint Creek that won eight state championships.

Holland also had the privilege of coaching his sons, Brad Holland and Luke Holland, in previous seasons. Perhaps he can help Mike transition to life after coaching his son.

“I don’t know how to feel right now,” Mike said. “I’m just so happy for these kids and these assistant coaches for busting their tails and the families, the parents of these kids were just such great people. I’m so appreciative of being able to be a part of their kids’ lives.

“I guess this will hit me a little bit more later. But right now, I just want to enjoy the moment with the kids. I’m excited for the next chapter for both my son Kade and myself.”

Two other Titans who played their final high school game together Saturday are brothers Preston Metesh and Avery Metesh. Preston is a senior, one year older than his brother, who’s a junior.

They were together on the 2018 title team after only Preston was on the 2017 title team. But this year’s title game was the first in which they were both starters — and they came up clutch.

“It’s awesome that I got to play a state championship with my brother, with Kade, they’re all my brothers,” Avery said. “The coaches, this is their last year. I mean, it’s just awesome.”

Preston and Avery started playing football together around third or fourth grade, they said.

“It’s been kind of our ups and downs because we would fight a lot, but it’s been great because we always push past things and get through it,” Avery said. “It’s kind of tough love.”

“It’s been fun, kind of,” Preston said, admitting they used to get into arguments when they were younger, which helped them bring toughness and a hard-nosed approach to the field. “We’re here together and then we go home and just talk about football, talk about the game.”

They both also played their last game for Mike Cutler. Preston will most remember “how intense he is,” which helped him grow as a player. For Avery, it’s how he was “always being on me” to keep improving as a player.

“He’s an intense man,” Preston said. “I love it though. I love the intensity.”

“He wants perfection out of you,” Avery said, “and he’ll get it out of you one way or another.”

A total of six seniors went out on top with the victory in the title game, their third championship in four years. Those seniors are Preston Metesh, Kade Cutler, Ethan Parke, Trevor Morrissey, Tucker Weaver and Mason Graeff.

“This title, not to degrade the other two, this one means the most because I'm a senior,” Kade said. “Doing this with all the boys for four years means a lot going out on top.”

So, father-son, brother-brother, senior class or even “crazy uncle,” they all went out atop the mountain, hugging the state championship trophy and one another in quite the storybook ending.

“Every morning, 6 a.m. in the weight room, we talked about it,” Kade said. “That was our goal: to get to this moment.”