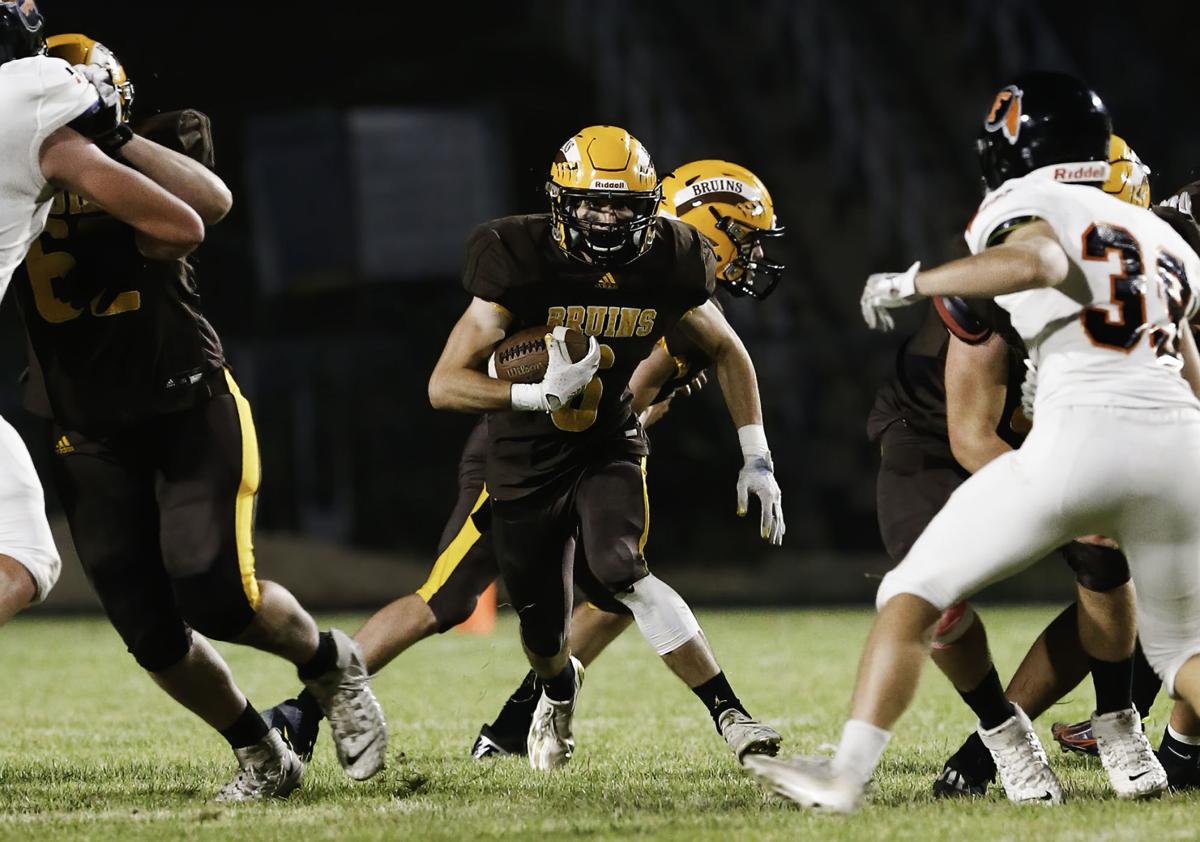 Luke Sullivan of Helena Capital rushed for 159 yards and two touchdowns in the Bruins 57-0 win Friday night over Flathead. 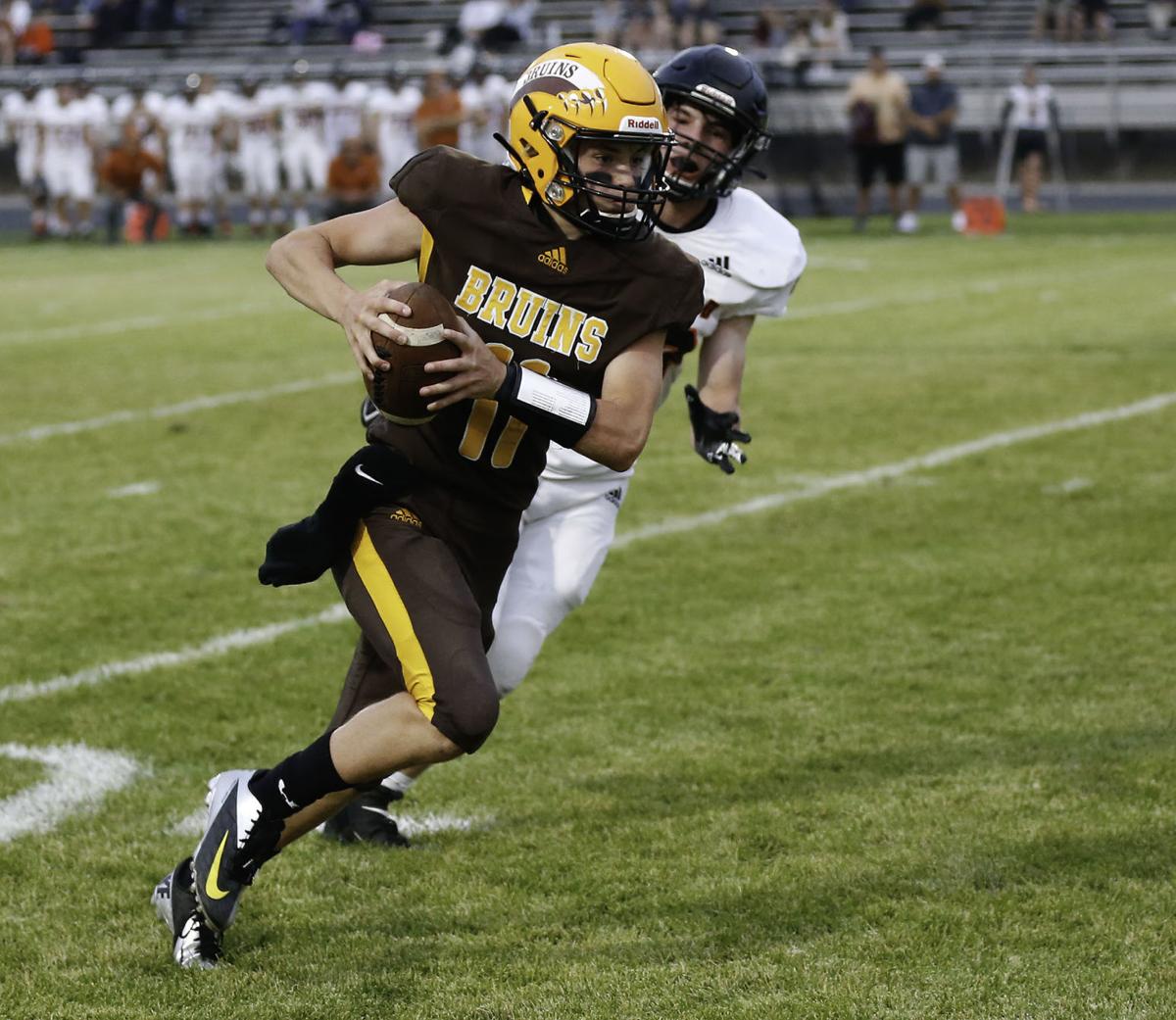 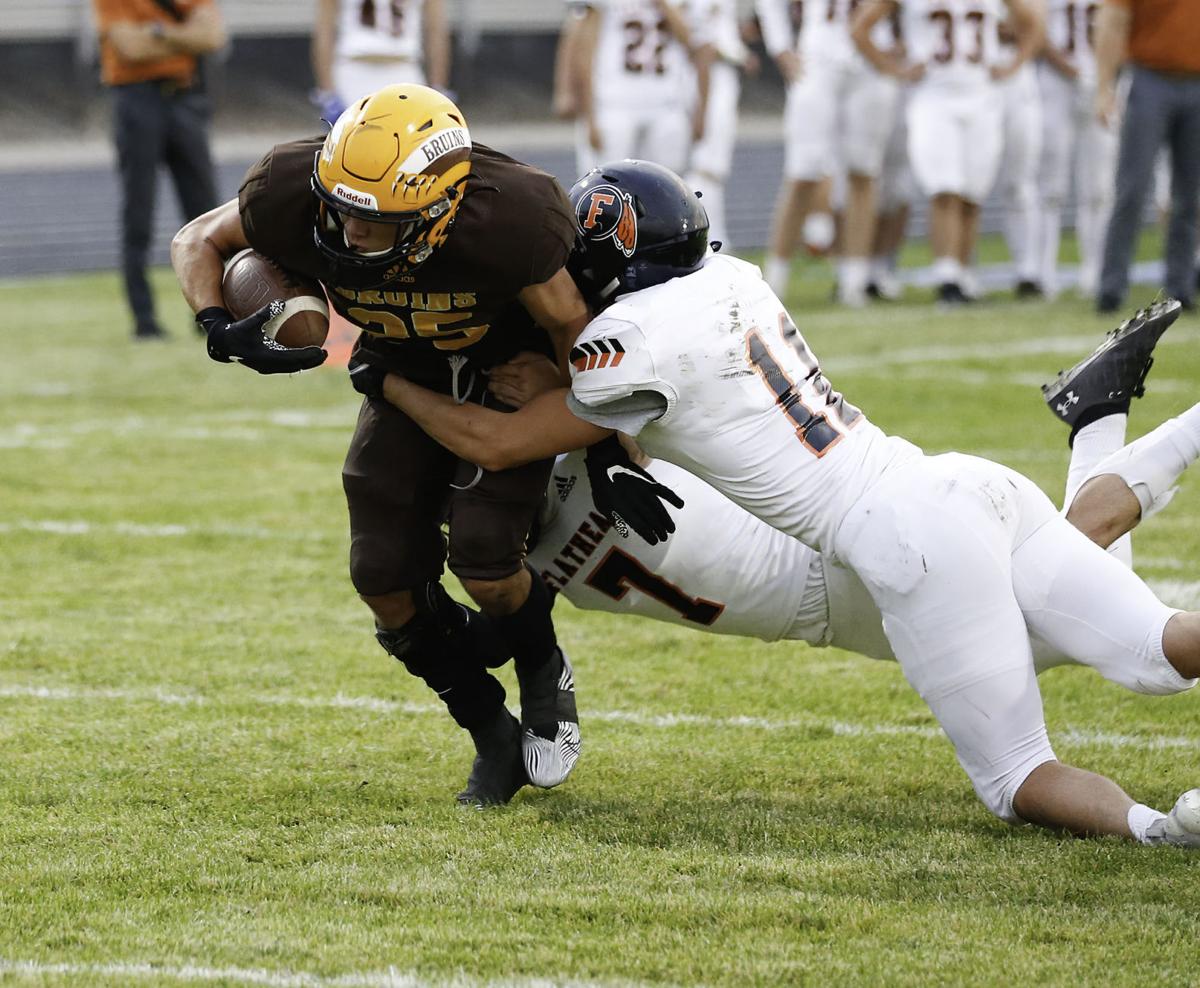 Dylan Graham of Helena Capital is pictured running the ball for the Bruins in a 57-0 win over Flathead. Graham scored two touchdowns before leaving the game due to injury.

Luke Sullivan of Helena Capital rushed for 159 yards and two touchdowns in the Bruins 57-0 win Friday night over Flathead.

Dylan Graham of Helena Capital is pictured running the ball for the Bruins in a 57-0 win over Flathead. Graham scored two touchdowns before leaving the game due to injury.

HELENA — Going into Friday's Western AA tilt with Kalispell Flathead, offensive execution was near the top of the priorities for Helena Capital head coach Kyle Mihelish.

And following a 57-0 victory over the Braves on Friday night at Vigilante Stadium — a performance that included three touchdowns within the first five minutes — the Bruins head coach was quite pleased with his team's performance.

"I thought it was great," Mihelish said of his team's win. "I thought our coaches had a great game plan. The kids executed well."

Defensive back Tom Carter opened the game with an interception for the Bruins and on the very next play, running back Dylan Graham ripped off a 40-yard touchdown run.

For his part, Carter wasn't done with big plays in the opening stanza. Following a three-and-out, Carter fielded a Flathead punt near midfield and raced 55 yards to the house, making it 14-0 Bruins in the blink of an eye.

"After we got that big punt return, before you know it, it was 14-0," Mihelish said. "We talked all week that we need to come out and have a solid performance. We kind of felt some things out in the first couple of games, but we have figured some things out at some positions and with it being conference play, it's full-speed ahead right now."

With the way Capital's offensive line was opening holes, it was full-speed ahead for every Bruin running back who touched the football Friday night.

Graham ran 38 yards for his second touchdown of the first quarter, making it 21-0 and following a safety, the Bruins led 23-0 after 12 minutes.

In the second quarter, Joey Michelotti, Capital's starting quarterback, got in on the act with a four-yard touchdown run, as well as 25-yard touchdown pass to Hayden Opitz, which pushed the CHS lead to 37-0 before Luke Sullivan, filling in for an injured Graham, capped the first half with a 36-yard touchdown run, making it 43-0 at intermission.

"They did a great job, all five of them," Mihelish said of his offensive line. "We had very limited mistakes. They were hat-on-hat, body-on-body and they were driving kids 10-15 yards. It was an impressive effort. They played with a chip on their shoulder."

In the second half, Sullivan added a one-yard touchdown run and Tuff Adams, a sophomore, found the end zone on a 21-yard run to finish off the scoring for Capital in the third quarter.

When it was all said and done, the Bruins racked up 358 yards on the ground with 159 coming from Sullivan on just 14 carries. He also scored twice, as did Graham who ran six times for 87 yards before departing the game. Adams also pitched in with 58 yards and a touchdown on seven carries.

"Luke really stepped it up," Mihelish said. "We don't know what's going to happen with Dylan, but even if we have Dylan, Luke Sullivan is going to have to shoulder more responsibility and he showed tonight he can do that."

In his first career start at quarterback, Michelotti was solid completing 11 of 17 passes for 139 yards. He did have one interception but also accounted for two touchdowns and also ran for 20.

"I thought he played well," Mihelish said of his QB. "He was excited and nervous. There were a few reads he didn't make, but it's a growth process. It's his first start and we'll go from there."