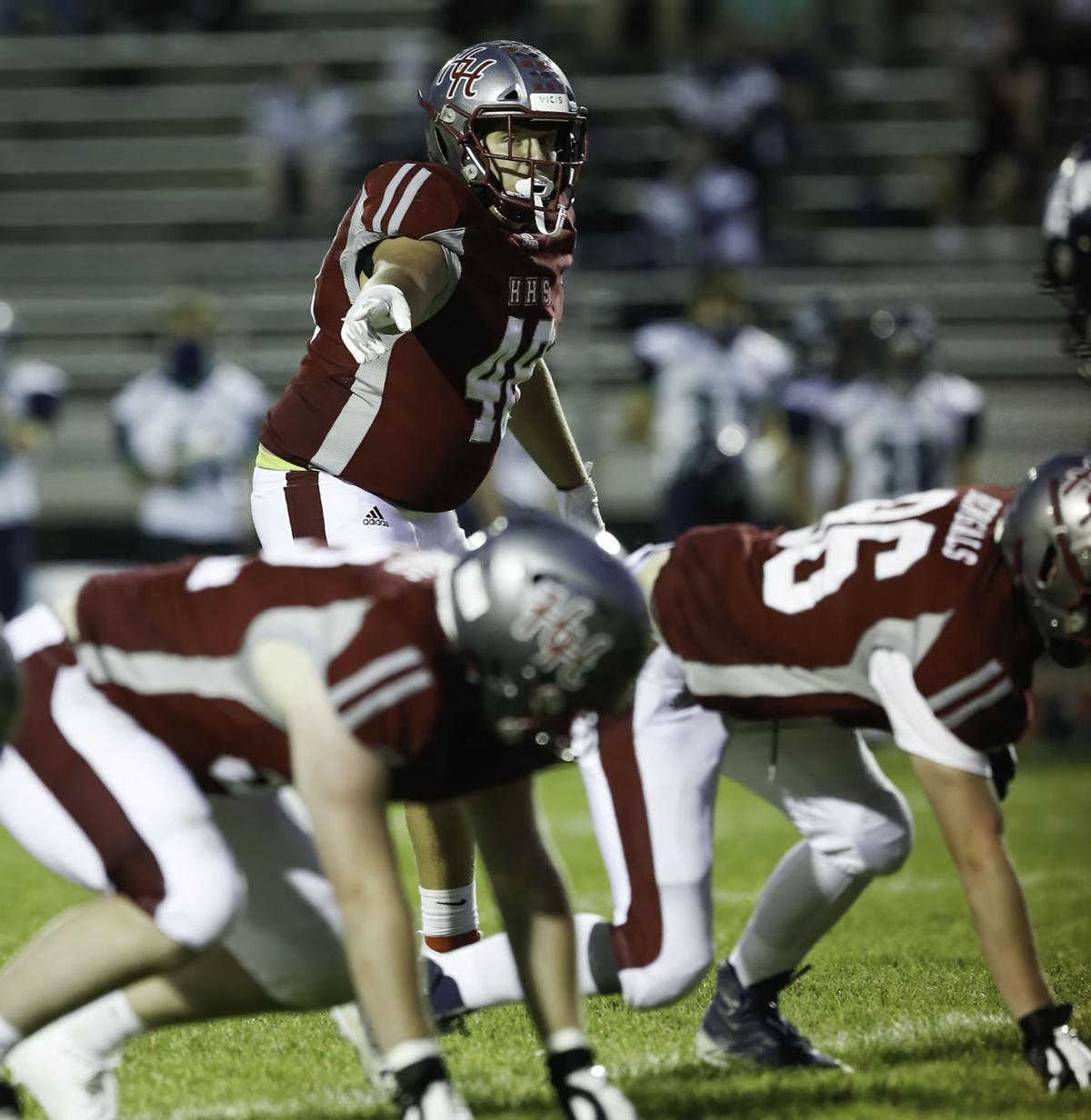 Zachary Evans (48) is pictured against Kalispell Glacier directing traffic before a play for Helena High. The Bengals will be in Missoula Friday night against top-ranked Missoula Sentinel. 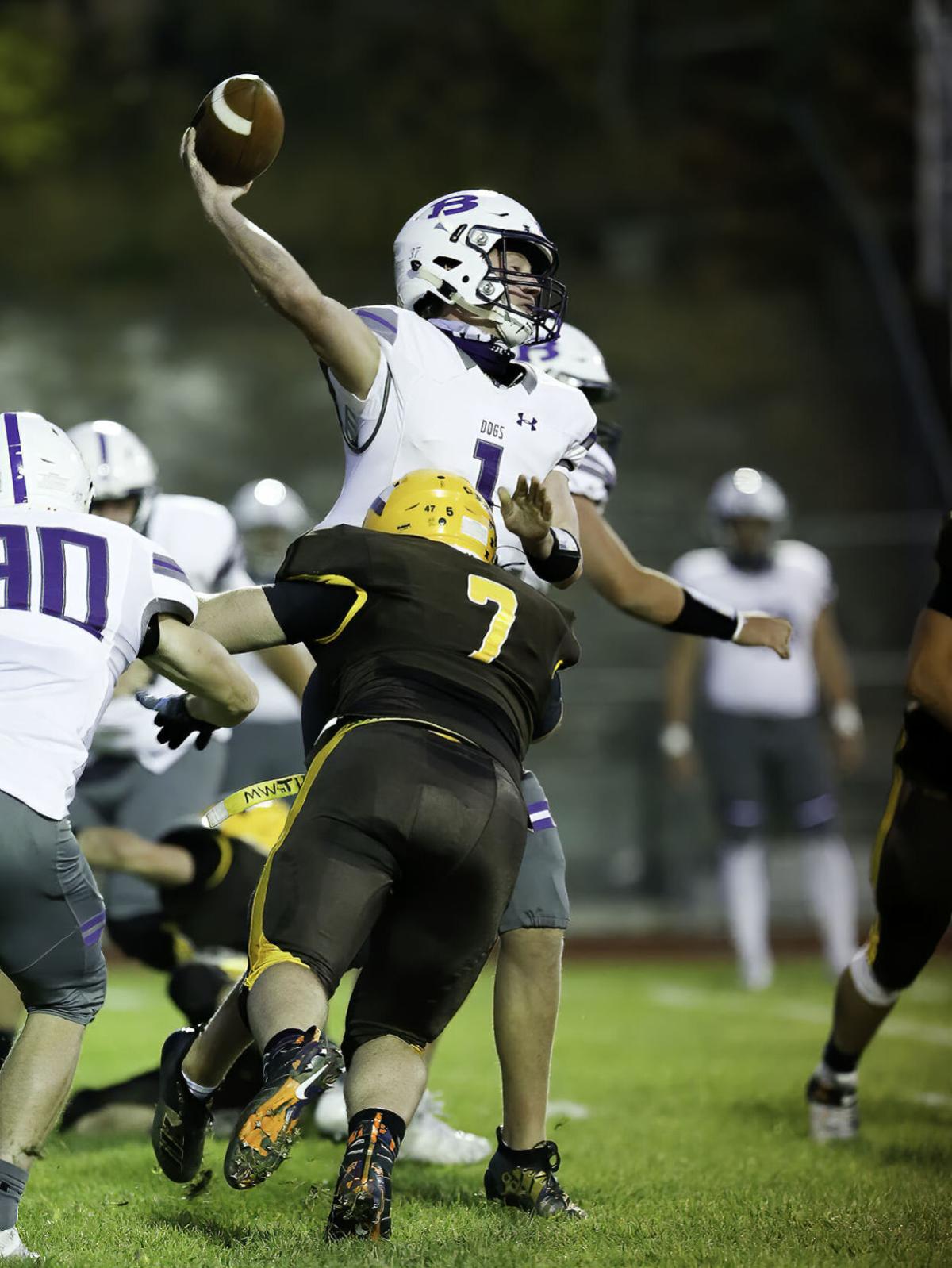 Capital defender Tyler Little hits the quarterback in a game earlier this season against Butte at Vigilante Stadium.

HELENA — As the cold weather moves in and the air becomes crisp, you can sense the high school football playoffs creeping closer and Friday night, both Helena High and Helena Capital have games with postseason implications.

For the Bengals, a trip to top-ranked Missoula Sentinel awaits. A win for Helena High, which would follow a win over Glacier last week, would deliver the Bengals the Western AA championship and the top seed in the division for the playoffs.

"There are so many things that are going to come out of this game," Helena head coach Scott Evans said. "There are great football players on both sides of the ball and you know if you win this game, you are coming out as the No. 1 seed and you can't ask for much better than that."

Sentinel comes in leading the Western AA in both scoring offense (50.2 ppg) and scoring defense (6.6 ppg). Yet, the Bengals are no slouches and they score 38 points a game while allowing just 8.8.

Both teams are blessed with talented quarterbacks too, although the key word with Sentinel is quarterbacks (plural) as both Camden Sirmon and Dayton Bay have been sharing the role.

In five games, they are averaging 219 yards per game passing to go along with 12 touchdown passes and zero interceptions between the two of them.

Sirmon, who has six touchdown passes, is also Sentinel's leading rusher with over 440 yards and more than 10 yards per rush attempt.

"They play both quarterbacks and I don't see them changing anything," Evans said. "They are scoring 50 points a game so I don't think I would change anything. There is no drop off with either quarterback so you just have to prepare yourself the best you can."

On the Helena side of things, there is no question about who will be taking the snaps at quarterback. That will be Kaden Huot, who has also been on a tear of late, throwing at least four touchdowns in three of his last four games.

For the season, the junior is completing 61 percent of his passes, for an average of 252 yards per game and 17 touchdowns. Helena also has an electrifying trio of receivers in Dexter Tedesco, Raef Miller and Chase McGurran, who all rank in top nine in Class AA in receiving yards.

"I have the utmost confidence in Kaden (Huot) right now," Evans said. "He's doing everything we need him to do and more. He's making plays right now that you don't see a lot of guys make."

Both teams are loaded on the defensive side of the ball too. The Bengals will lead by Zachary Evans, who is the top tacker in Class AA right now, as well as his younger brother Marcus Evans. Helena also gets David Lowry back from injury. Sentinel boasts linebacker Geno Leonard, who is a University of Montana commit along with Jace Klucewich and T.J. Rausch.

While the Bengals have a spot in the postseason locked up, Capital needs a win at Vigilante Stadium to wrap up its playoff berth and will look to do so against Missoula Hellgate, which also needs a win to stay in the mix.

"It's another big game," Capital head coach Kyle Mihelish said. "Hellgate throws the ball around and I think they threw it 60 times against Sentinel, so that kind of worries you as a coach, because if they hit two or three of those, that's 21 points on the board. Our defense will be challenged and both sides of the ball will be challenged."

Mihelish said that Hellgate will throw a bunch of different looks at the Bruins, with multiple fronts and blitz packages. The offense will be focused on the Bruins ground game which features Tiegan Cozzie, Carson DesRosier and Dylan Graham, as well as the passing game led by QB Matt Burton. Quinn Belcher and Tom Carter, who came down with a clutch TD catch in last week's win over Missoula Big Sky, are the top receiving options.

Another big key for the Bruins will be slowing down Hellgate quarterback Dante Maiuri, the leader in Class AA with 297 yards per game. The thing that can disrupt any quarterback, though, is a pass rush.

"That's the goal," Capital's Tyler Little said. "Is to get to the quarterback and hit him. They throw the ball a lot though, so it's going to take a lot of energy."

Little, a senior, will be just one of the Bruins honored Friday night in what is Capital's final home game of the season. The Bruins will be the visiting team against Helena High in next week's crosstown matchup.

"It's hard to believe it's gone by this fast," Little said. "I have kind of taken some moments for granted and I wish I hadn't."

Little and the Bruins plan to take full advantage of their opportunity Friday night and with a win, they will guarantee themselves at least one extra game in the postseason.

"All we are thinking about is a win," Little said. "Because if we lose, we don't know what happens."

Kickoff for both Helena High and Capital is set for 7 p.m.