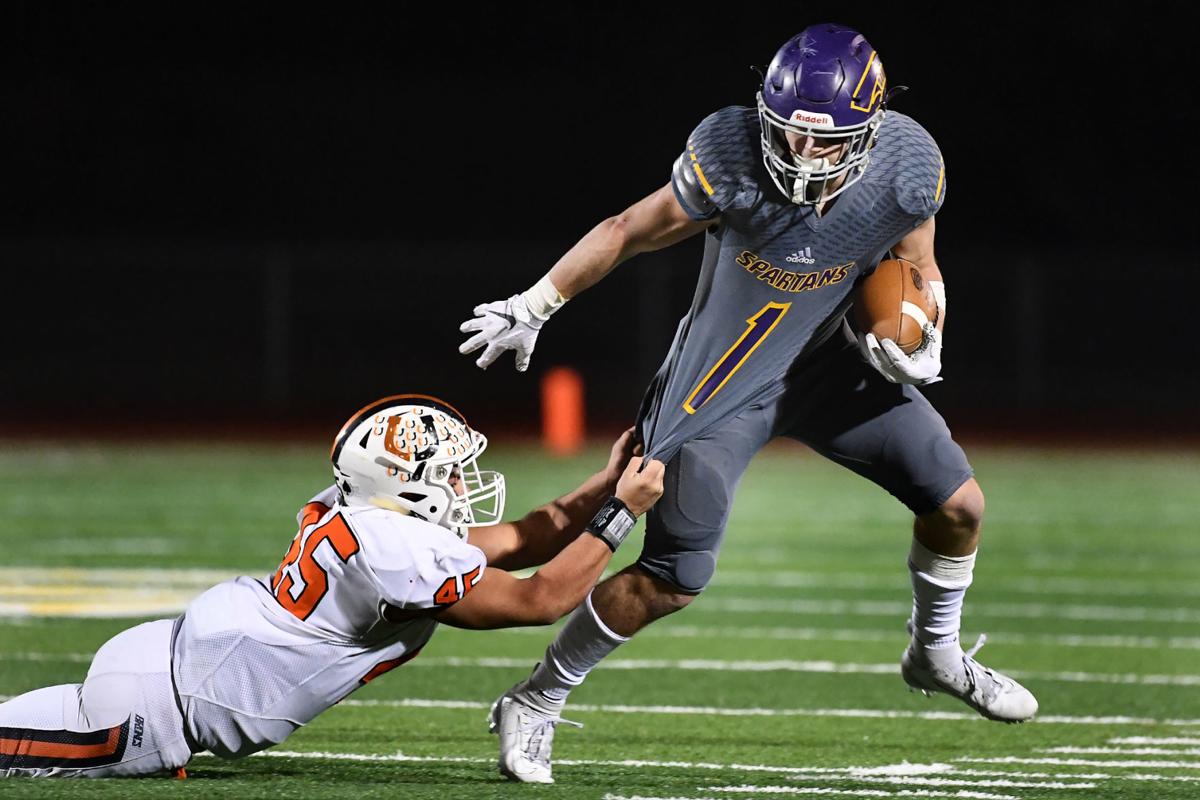 Missoula Sentinel's Jaxon Lee breaks a tackle by Billings Senior's Peyton Morton in the third quarter of the Spartans' 24-14 win over Senior in the State AA quarterfinal at Missoula County Stadium on Friday night. 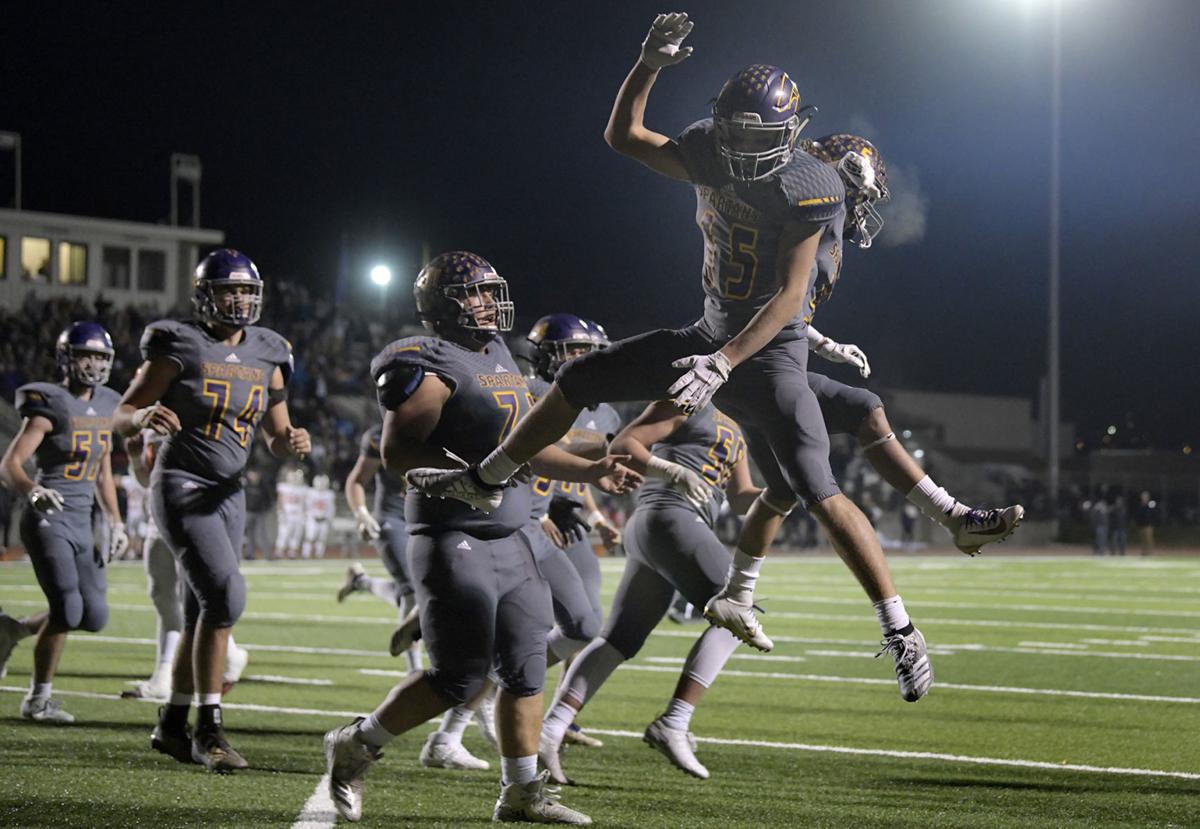 Missoula Sentinel's TJ Rausch (15) celebrates with his teammates after a touchdown in the first half. 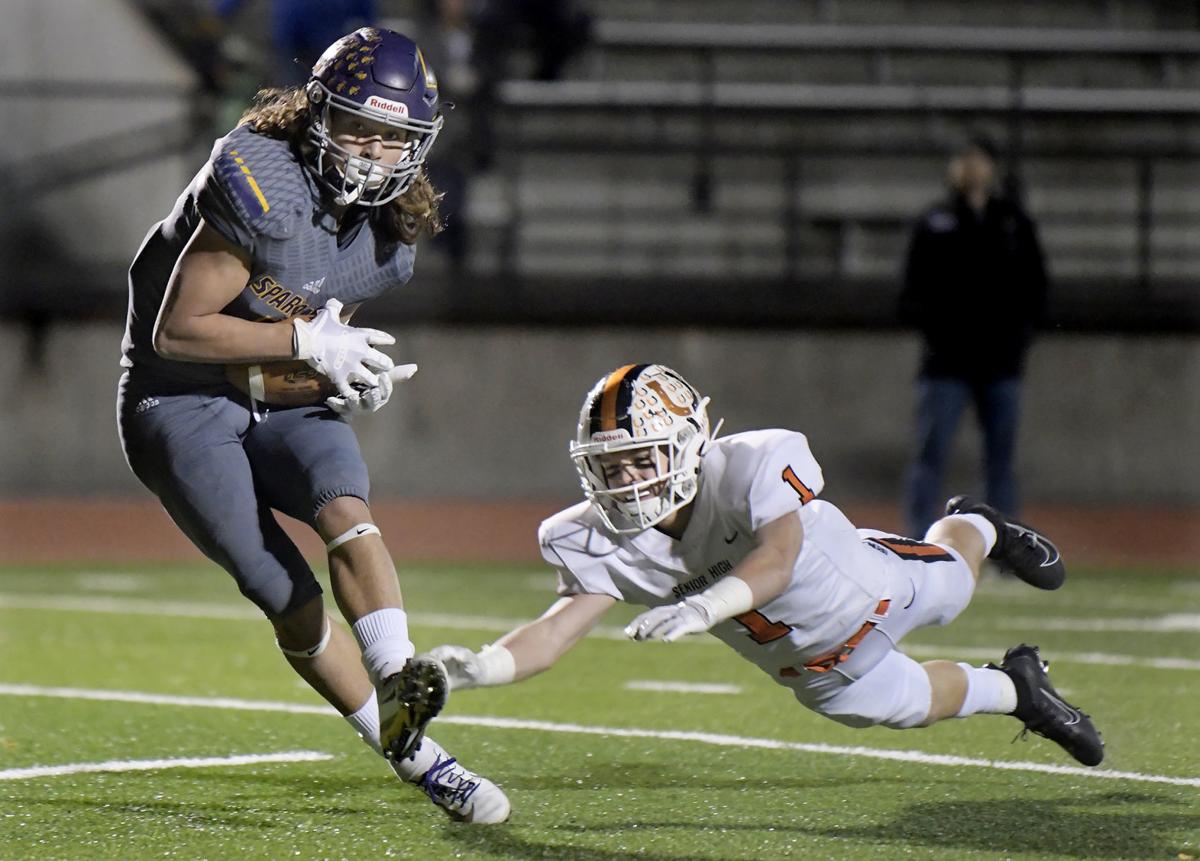 Missoula Sentinel's Preston Jones scores a touchdown in the first half as Senior's Sam Jacobsen dives as he misses a stop.

Missoula Sentinel's Jaxon Lee breaks a tackle by Billings Senior's Peyton Morton in the third quarter of the Spartans' 24-14 win over Senior in the State AA quarterfinal at Missoula County Stadium on Friday night.

Missoula Sentinel's TJ Rausch (15) celebrates with his teammates after a touchdown in the first half.

Missoula Sentinel's Preston Jones scores a touchdown in the first half as Senior's Sam Jacobsen dives as he misses a stop.

MISSOULA — Missoula Sentinel rattled off 24 straight points in the first half  as the Spartans downed Billings Senior 24-14 on Friday night at Missoula County Stadium.

The win pushes the Spartans to 10-1 on the year and into the state semifinals for the second time in three years. Sentinel will host Bozeman next Friday with a trip to the state championship on the line.

“I wouldn’t say it was pretty, but we’ve been finding ways to win for so long, this program was trying to take that next step and it’s nice to see us find ways to win ballgames,” Sentinel head coach Dane Oliver said. “I thought the defense was lights out and that’s kind of what we’ve hung our hat on all year.

"Lot of credit to Billings Senior and that defensive structure they run, it caused us a lot of problems.”

While it certainly did, the Broncs special teams units did as well.

After going three-and-out on the opening possession of the game, Sentinel punter Charlie Kirgan had a kick blocked by Senior’s Peyton Morton and returned inside the 5-yard line. Several plays later, senior Bronc running back Alyas Wright punched in the ball from a yard out with 8:57 left in the first quarter.

After trading punts and a turnover on downs, Sentinel was finally able to get on the board with a 27-yard Cam Dirnberger field goal. Even so, there was little in the way of offensive momentum for the Spartans.

“Just keep playing, that’s our mentality,” Oliver said. “So much trust in our coaches and players that they’re going to stay in the right frame of mind and respond and it was great to see them do that.”

The response started early in the second quarter. Following the field goal, the salty Spartan defense had one of their 11 stops on third down and forced a Senior punt.

Standout returner Preston Jones returned the kick 23 yards and three plays later was on the receiving end of a 3-yard touchdown throw from quarterback Dayton Bay.

Sentinel scored twice more before the half ended, the first coming on a 37-yard touchdown run from Jaxon Lee. The Griz commit had four catches for 54 yards — with his longest, a 42-yarder, coming the play before his touchdown run — as well as 32 carries for 191 yards.

The Spartans finished with 302 total yards, 214 of which came on the ground.

“We needed big plays, I think that was kinda the difference,” Lee said. “Just getting the first downs, any kind of yards bigger than 10 was what we needed to keep ourselves in the game, because they had a good defensive front and defensive backs.”

Senior totaled just 179 yards on 61 offensive plays and could not get much moving until the very end of the game. The Broncs final touchdown came on a 34-yard touchdown pass from Michael Ohlin to Nick Eliason to make the score 24-14, but the ensuing onside kick was picked up by the Spartans.

Senior finished the season 5-5. Sentinel is looking to make its first state championship appearance since 1984 when it hosts the Hawks on Friday.

“Last time we played, Will Dissly was the defensive end, I think it was my second year as a head coach,” Oliver said. “We haven’t seen them in a long time. We’ll have to go back, evaluate and enjoy this win … we’ll be ready to go next week.”