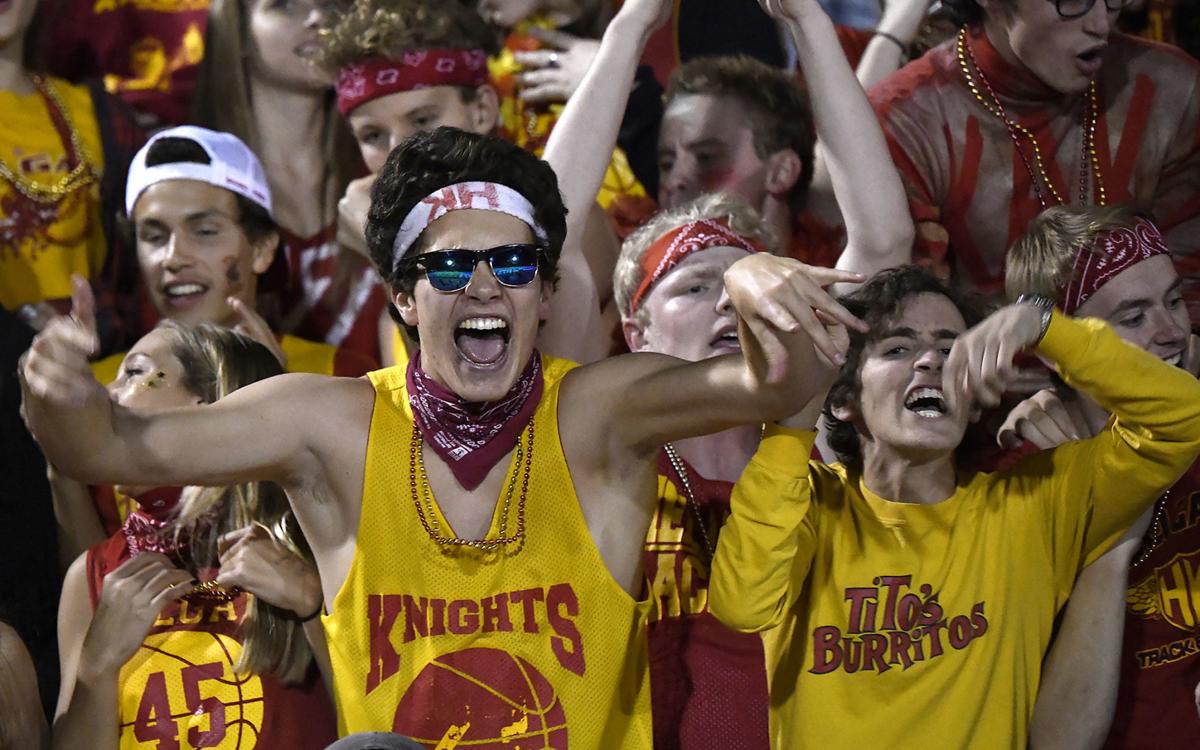 Hellgate students celebrate the Knights' first win since 2012 as the clock winds down in the fourth quarter Friday night at Missoula County Stadium. 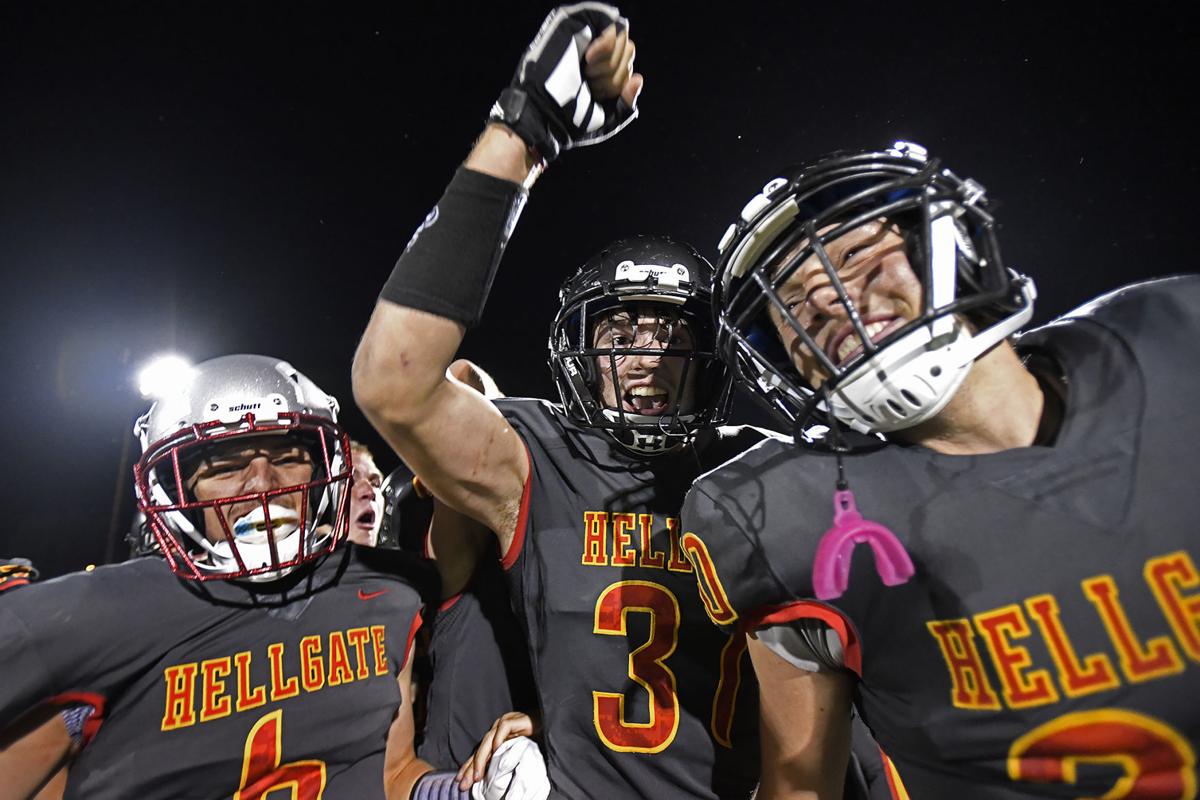 Hellgate's Brandon Coladonato, Thomas Riley and Fisher Richardson celebrate together after the Knights snapped their 57-game losing streak on Sept. 21. 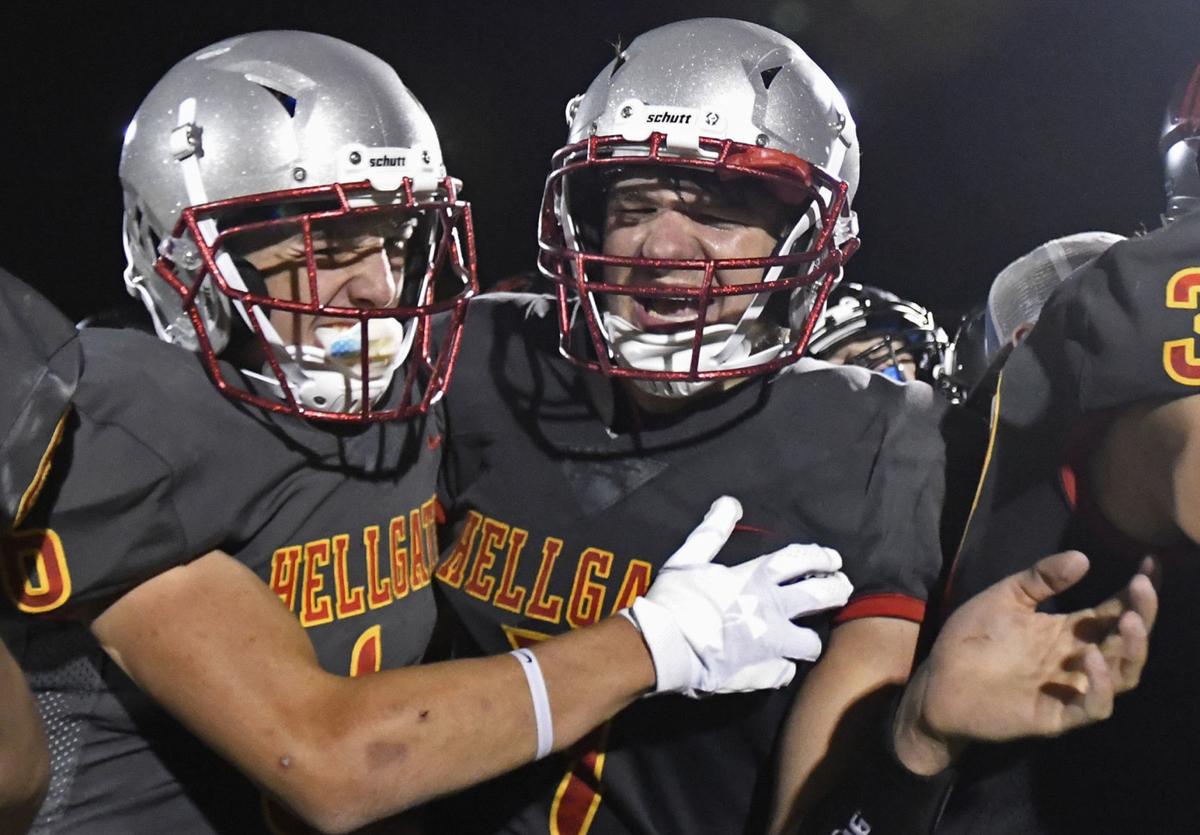 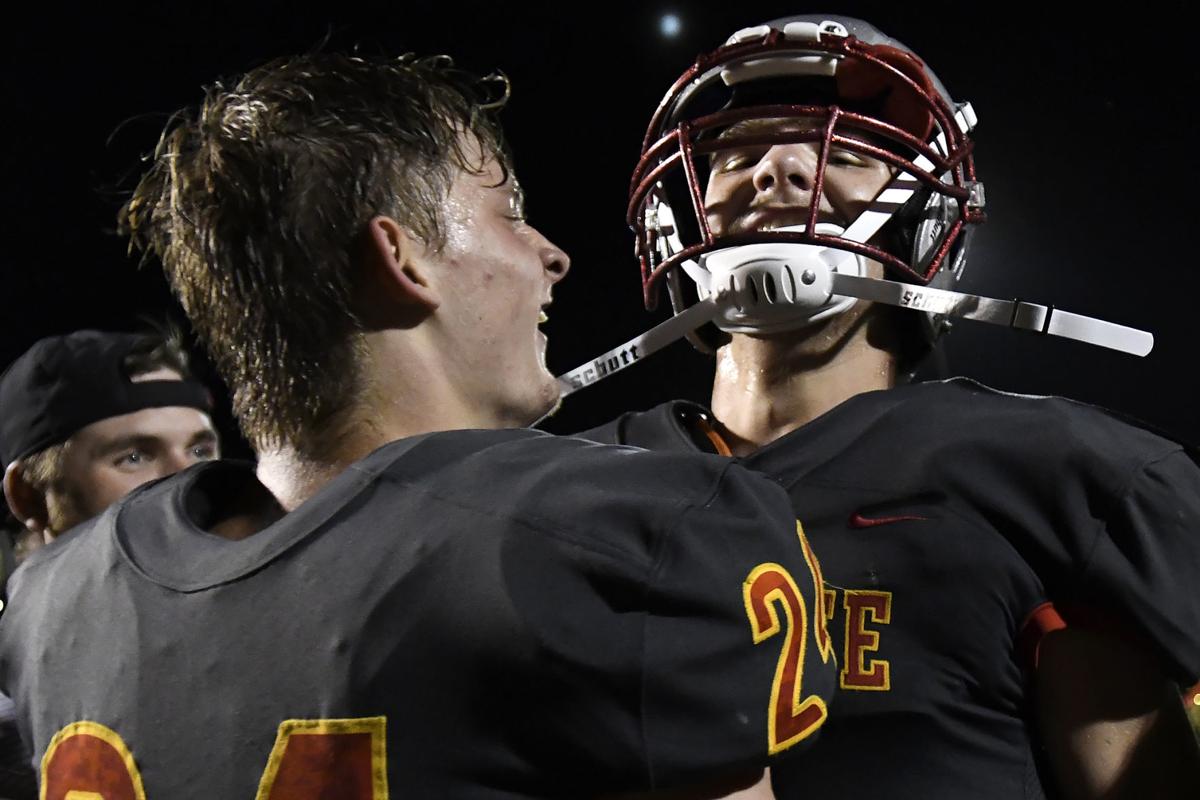 Hellgate students celebrate the Knights' first win since 2012 as the clock winds down in the fourth quarter Friday night at Missoula County Stadium.

Hellgate's Brandon Coladonato, Thomas Riley and Fisher Richardson celebrate together after the Knights snapped their 57-game losing streak on Sept. 21.

The junior quarterback/defensive back — and Montana basketball commit — stood on the field at Missoula County Stadium surrounded by a mob of Missoula Hellgate fans decked out in red and gold to soak in the first varsity football win for the Knights since Oct. 5, 2012.

In the midst of all the post-game celebration, Worster's dad, Scott, found his son to give him a congratulatory kiss on the cheek.

Some parents fought back tears. Several students screamed into the night. Others laughed with glee. Dozens of Hellgate players jumped up and down in jubilation and tried to give coach Mick Morris a sports drink shower. Several others hugged anyone they could find.

After 2,177 days, the 57-game losing streak was indeed over after the Knights topped the Great Falls CMR Rustlers, 28-20, Friday night.

"Right now, no," Worster said of if he could believe the streak was over. "It's a little overwhelming. I think we deserve this. We worked really hard for this."

Senior Fisher Richardson's face was all smiles, too.

Richardson, one of the oldest players on the team, was a sixth grader when the streak began. Freshmen on the team were in third grade back in 2012.

"It's pretty incredible. It's unbelievable," Richardson said. "I've only been in the program one year, but that being said, with the energy these guys bring every day, it feels like I've been here the whole time. It's a nice team win."

The Hellgate program Morris inherited in June 2016 was in dire straits. At that point in time, the Knights had lost 33 consecutive games.

One month after he was hired, the Morris announced the Knights would be forfeiting the entire 2016 varsity slate.

"To just say it's just a win is a lie," Morris said. "It obviously means a hell of a lot more than that."

Baldridge, the two-time defending boys Montana Gatorade Player of the Year, and Hage have been a part of three consecutive Class AA titles in boys soccer and are looking to take home a fourth crown this season.

Even they understood just how much the win meant.

"This is huge," Baldridge said of the football team's victory. "They haven't won in six years. It's ridiculous. It's ginormous. I got way more hype tonight than any win we've had this year in soccer. These guys put it all out there, grinded it out and came out with a sick W. It was crazy."

Hage added: "Just for them to show out every game, come out, put in the hard work and be able to come out with a win. They did something that's crazy and I'm happy I got to be here to see it."

Baldridge and Hage made up just a fraction of the several hundred-person student section packed into the stands Friday night.

The student section could be heard from blocks away.

"Our school spirit is off the chain. We have the best student section in the state cheering these dudes on every Friday night," Baldridge said. "We did it for these boys.The seniors who haven't won a game their whole career, now they got one. It's friggin' rad. It's awesome."

Morris added: "Our student section was awesome. They've been awesome all year."

Three members of the student section had streaks of their own, jumping out of the stands and darting across the field in either their birthday suits or being as close to naked as possible.

"I only saw one of them. Unfortunately, I saw the fully naked one," Morris said. "I heard he did a good flip."

Worster added: "I only noticed one. I didn't notice them all."

It's been a good week for losing streaks to end. On Thursday night, the Cleveland Browns' 635-day losing streak came to an end when Baker Mayfield orchestrated a 14-point comeback to top the New York Jets.

The similarity wasn't lost on the Knights.

"It's been a long time coming," Morris said. "The Browns won last night. It's been 2,177 days since we've won. Hopefully they unlock something out there for us tonight."

Richardson added: "Just two teams getting better and winning on the battle field."

Hellgate's streak is bookended with teams from Great Falls. Before Saturday's win against CMR, Hellgate's last win in 2012 came against Great Falls High in a tough 6-0 win.

Six years is a long time to wait for a win as so much has happened since then.

The iPhone 5 came out right before Hellgate's 2012 win. Fast forward to 2018: the iPhone XS is about to hit the shelves.

The top songs during the 2012 football season were Taylor Swift's "We Are Never Ever Getting Back Together" and Maroon 5's "One More Night."

The 57 games in between now and then weren't all bad losses.

The first three games of the streak in 2012 against Big Sky, Bozeman and Kalispell Flathead were all 10-point losses or less.

The 2013 season was dismal. The Knights were outscored 469-47 through 10 games and were shut out six times. Not all was bad, though. Hellgate's loss at Billings Senior was by just two points and the Knights' loss on the road against the Flathead Braves was just by one.

Most of the games in 2014 were lopsided, except for Hellgate's 3-point loss on the road in Great Falls.

The next year, 2015, was rough as well. The games Hellgate didn't forfeit were all at least 28-point losses.

The skid almost came to an end last week in a crosstown match with Big Sky. The Knights had it in the bag but blew a 20-7 halftime lead.

"The biggest thing we gained from last week was experience," Richardson said. "We have struggled as a program for a while. To come up and not come out with energy in the second half was tough last week, but I feel like we brought it even though we fumbled.

"We were able to fight back after getting down a little bit, spirit wise. Shout out to our student section for that. The helped keep us up."

Hellgate will long remember this win, but the celebration ends Monday.

The Knights travel to Billings to take on Skyview next Friday in another game that the Knights could win.

Hellgate hasn't won a road game since Sept. 7, 2007, when the Knights upended Glacier, 28-7, in the first year of the Wolfpack varsity program.

Missed any of the action? Catch up with all our coverage of statewide high school football Sept. 20-22, 2018.

We're looking back at our most-read stories from 2018. Sixteen through twenty included sobering news from Eastern Montana, the snapping of a l…

MISSOULA — The Missoula Hellgate football team made an announcement on Friday night.