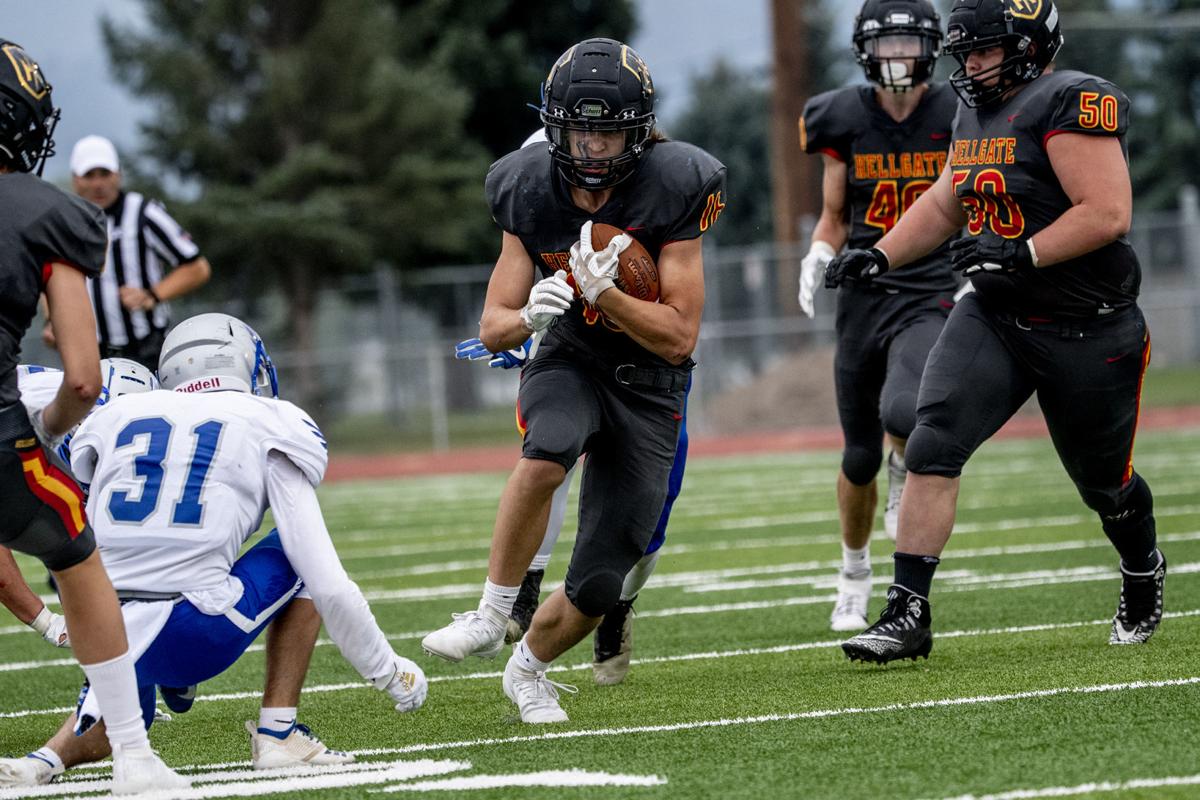 Missoula Hellgate's Jake Sweatland (16) powers through a hole in the Billings Skyview defense during their football game at Missoula County Stadium on Friday night. The Knights defeated the Falcons, 39-0. 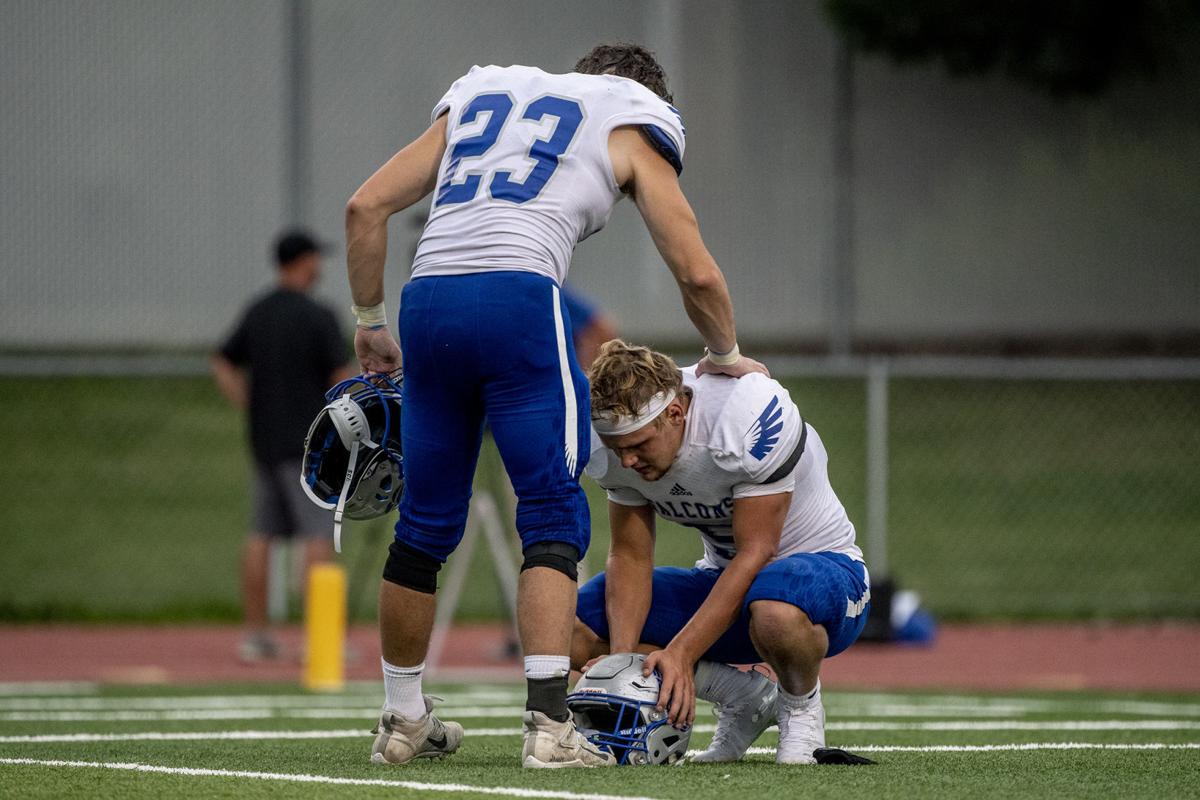 Missoula Hellgate's Jake Sweatland (16) powers through a hole in the Billings Skyview defense during their football game at Missoula County Stadium on Friday night. The Knights defeated the Falcons, 39-0.

Knights coach Mick Morris didn’t think his team created that many turnovers all of last year.

“We feel pretty good about our team, but we haven’t had much luck stopping people the last couple of years,” Morris said after the Knights’ 39-0 victory at Missoula County Stadium, their first season-opening win since 2000 and their first shutout in nearly seven years.

“I didn’t know we were capable of playing that well. We had a lot of guys flying around. We haven’t been that physical before. It was a good sign. Whether it was our defensive line or our linebackers, even our secondary, they were coming up and popping. We were really happy with that.”

Hellgate turned the four turnovers into 28 points across the second and third quarters. The Knights came up with three fumble recoveries and one interception during a stretch of six drives by Skyview, which fell to 0-2 on the season. They broke open a 16-0 game with 23 points in the third quarter.

The shutout was the Knights’ first since they posted a 6-0 win over Great Falls High on Oct. 5, 2012. That game had been Hellgate’s most recent victory until it snapped a 57-game losing streak on Sept. 21, 2018, on its way to a 2-8 season and brighter outlook this year.

“I think it’s a huge deal,” Hellgate quarterback Rollie Worster said of starting 1-0. “Coming off last year and having those two wins and now having some confidence going into the next couple games, it’s big for us.”

The game started to turn on a pair of plays late in the second quarter. Trailing 8-0, Skyview marched to the Hellgate 22-yard line when senior defensive lineman Kade Ferree came off the right edge and forced a fumble that was recovered by junior linebacker Brennan Dumont.

On the next play, the Knights sent all their receivers deep. Worster rolled to his right and connected with sophomore Ian Finch for a 76-yard touchdown that put Hellgate up 16-0 after a two-point conversion.

“We felt pretty good about that matchup,” Morris said. “That was a hell of a throw by Rollie. I’m not sure how far it traveled in the air, but that was pretty fantastic.”

On the first drive of the second half, Hellgate defensive lineman Thomas Riley recovered a fumbled snap at the Skyview 37-yard line, and the Knights turned it into a 2-yard touchdown run by Worster. On the ensuing kickoff, Hellgate forced a fumble that sophomore Chase Goldade recovered at the 4-yard line, and Worster punched in a 3-yard touchdown run.

On Skyview’s third possession of the third quarter, junior Brayden Terzo picked off quarterback Cole Allison and returned the ball for a 36-yard score. That came one play after Hellgate had an interception waived off because of a penalty.

“They did a nice job pursuing the ball,” Skyview coach Nathan Wahl said. “That’s where it starts is good pursuit. They did a good job with that. There were some things we didn’t take advantage of consistently and just didn’t make plays because of that. They were aggressive.”

Hellgate’s defensive performance was much needed because Skyview’s defense kept the Knights’ offense in check throughout most of the first half.

“Our offense struggled early, and that was on me, especially throwing,” Worster said. “Our defense came out and made huge plays and got stops and came out in the second half and played hard. I think everyone just flat out made tackles, especially our DBs coming up and making hits and then our line up front did really good.”

The rest of the Knights carried the ball 12 times for 11 yards. Senior Abe Johnson made a 20-yard field goal.

“Credit to Skyview because they kind of kicked our butt up front a little bit,” Morris said. “We had a tough time getting our run game going with our running back.”

Hellgate’s defense held strong despite Skyview switching quarterbacks between Allison and Brenner Bushfield throughout the game. The Knights held the Falcons to 128 yards of offense on 48 plays, with 65 coming through the air and 63 on the ground.

“I thought we had a pretty strong plan coming in, and using both quarterbacks was a big part of that,” Wahl said. “Both of them bring a bunch of things to the table, so we really look at it as a weapon. Unfortunately, we didn’t get it going with either of them today.”