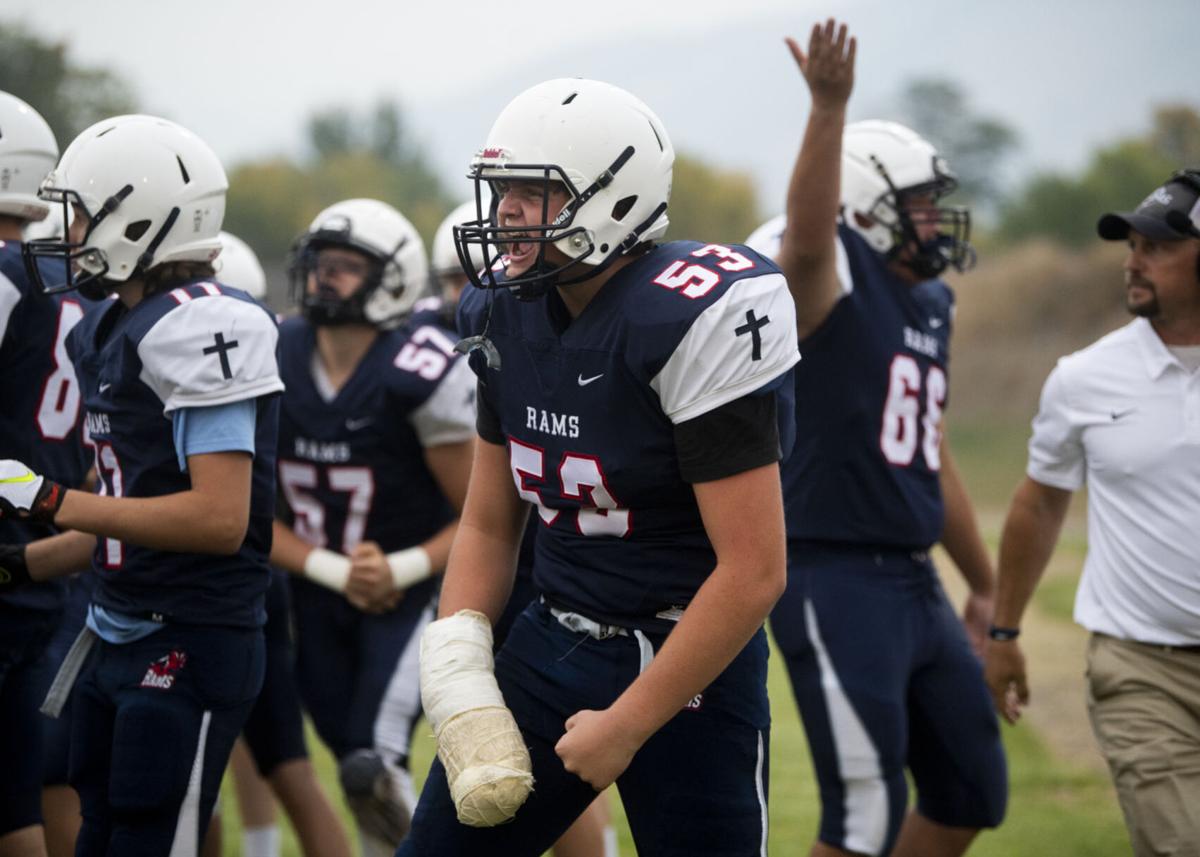 Loyola Sacred Heart's Rey Johnston (53) reacts after a turnover on downs during the Rams’ game against Manhattan at Rollin Field on Friday night. 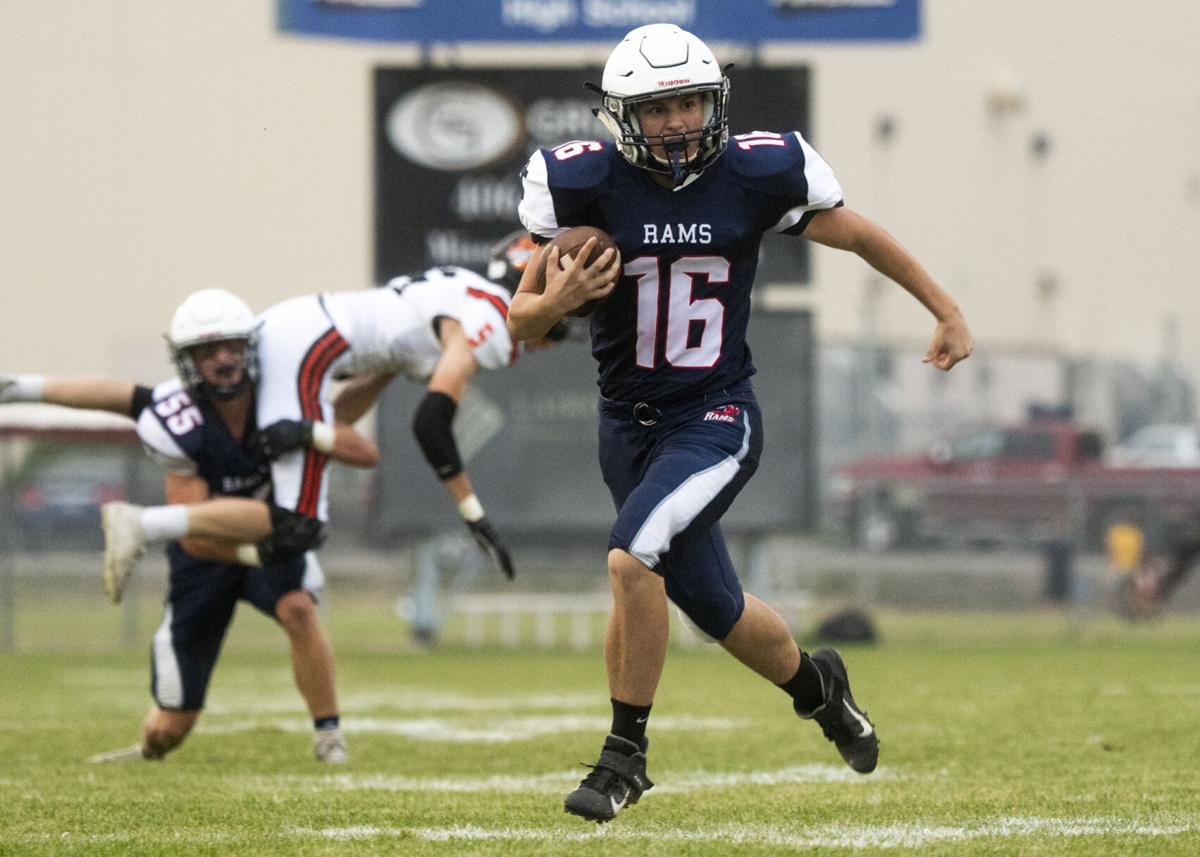 Loyola Sacred Heart quarterback Aiden Round runs the ball during the first quarter of the Rams’ game against Manhattan at Rollin Field on Friday night. Loyola led 7-0 at halftime. For live results from the game, log on to missoulian.com. For a game story and photo, see Sunday's edition of the Missoulian.

Loyola Sacred Heart's Rey Johnston (53) reacts after a turnover on downs during the Rams’ game against Manhattan at Rollin Field on Friday night.

Loyola Sacred Heart quarterback Aiden Round runs the ball during the first quarter of the Rams’ game against Manhattan at Rollin Field on Friday night. Loyola led 7-0 at halftime. For live results from the game, log on to missoulian.com. For a game story and photo, see Sunday's edition of the Missoulian.

MISSOULA — Last weekend, the Missoula Loyola football team had a chance to knock off Class B second-ranked Fairfield on the road.

The young Rams team had the game tied heading into the fourth quarter when the bad side of having a youthful team reared its head.

That didn't deter the team heading into a home matchup with No. 10 Manhattan — better known as the defending Class B state champs — on Friday.

But unlike last week, the Rams pulled the upset. Loyola outlasted the Tigers, 20-14, in an overtime thriller at Rollin Field. Loyola upped its record to 2-1 while Manhattan fell to 0-2 after losing to top-ranked Florence last week and now the Rams.

"That was a big focus all week long: finishing, finishing strong, finishing and respecting the game and how it's supposed to be played," Rams coach Todd Hughes said. "That's a hell of a football team, the defending state champs."

The Rams quickly were faced with a similar predicament against the Tigers. They jumped out to a quick lead, forcing a fumble off a sack by defensive lineman Carson Tipp on Manhattan's first drive. Loyola took advantage, scoring on the legs of sophomore tailback Talen Reynolds, who scored all three of the Rams' TDs as part of a big night on the ground, from a yard out.

From there a defensive slugfest ensued. Neither team gave room and at one point the two combined for four straight punts in the second. Just when Manhattan had a rare scoring chance, Tigers quarterback Calin Fenno was picked off near the red zone by Rams defensive back, and starting QB, Keenan Russell, who happens to be one of a handful of seniors on a young roster.

But then the Tigers started showing life, plus some.

Loyola's opening drive of the third ended on a turnover on downs inside Tiger territory after eating up over seven minutes of game time. The Tigers marched down field, but didn't need to get that far down. Tigers senior quarterback Austin Devers found star wideout Corban Johnson for a 36-yard strike late in the third as Johnson rose over his smaller defender to high point the ball and bring it in.

After some time, late into the fourth with just over five minutes left and the Tigers up 8-7, Devers again found Johnson after faking a run and flipping a 24-yard pass to the 6-foot-2 wide receiver. The two-point PAT try was no good, but the Tigers looked like they had dealt the winning blow in a low-scoring ball game.

“It’s definitely a heartbreaker,” Tigers coach Chris Grabowska said to Bozeman Chronicle sports editor Colton Pool. “We have the opportunity to get better this week. … We’ve just got to respond well from the loss, work hard this week and look forward to the next game.”

Loyola, down 14-7 with just over three minutes left in regulation, flew down to the Tigers' 29 and took advantage of a few penalties by the Tigers defense — namely an illegal substitution on third down and an offsides also on third down. Some time passed and Loyola found the end zone off a 5-yard up the middle run by Reynolds with just 22 seconds left to tie the game.

Reynolds finds the end zone on a run after three passes in a row. Loyola then drills the PAT and with 22 seconds left Loyola has tied it at 14-14 #mtscores pic.twitter.com/ETjCxHExOf

Just like that the game was even, and even quicker than that the game ended after Manhattan couldn't advance at all in OT and Reynolds burst through the line on the Rams' first play to seal the win.

"They are tough," Hughes said of his squad that has 25 underclassmen to just 12 upperclassmen. "They play this game like it's supposed to be played. They play it with physicality. They play with love for one another. They play it for their community, our administration, their teachers. they get it."