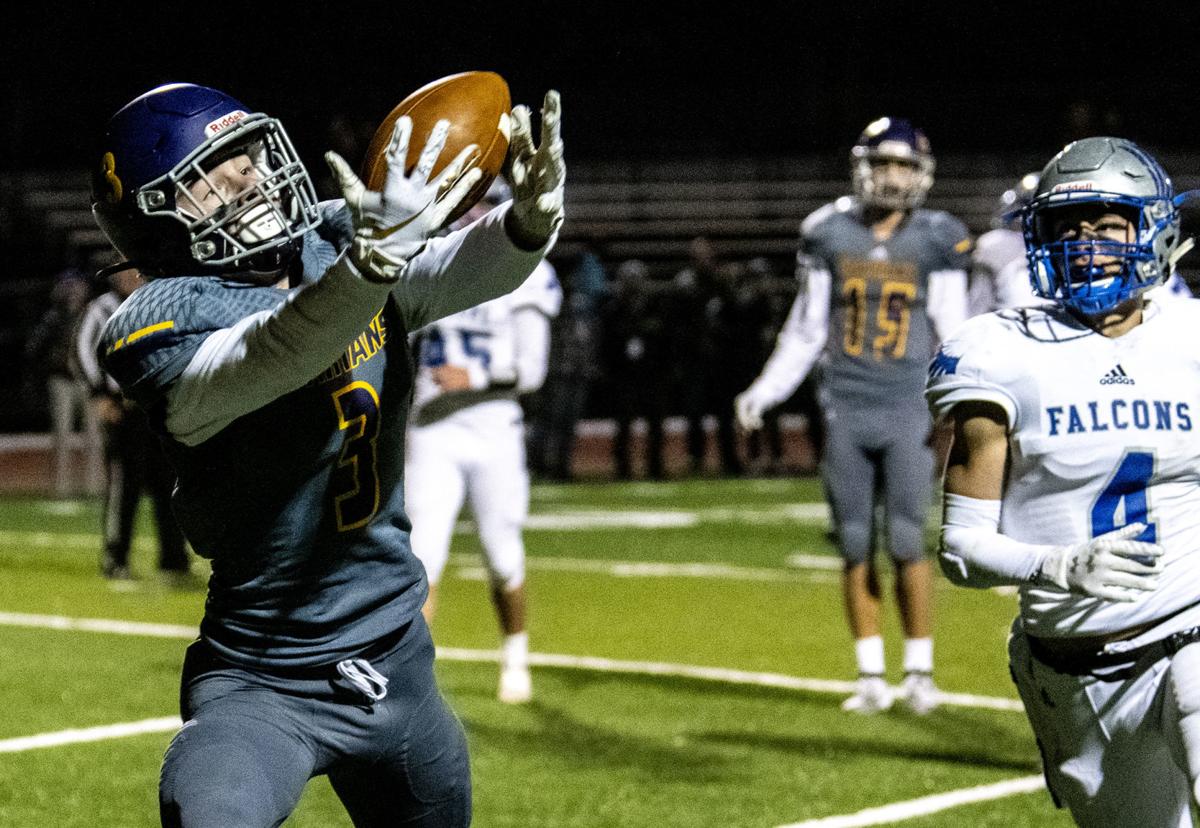 Missoula Sentinel's Jaime Jacobsen catches a pass in the end zone during the first half of the Spartans' game against Billings Skyview at Missoula County Stadium on Friday night. Sentinel won 45-7. 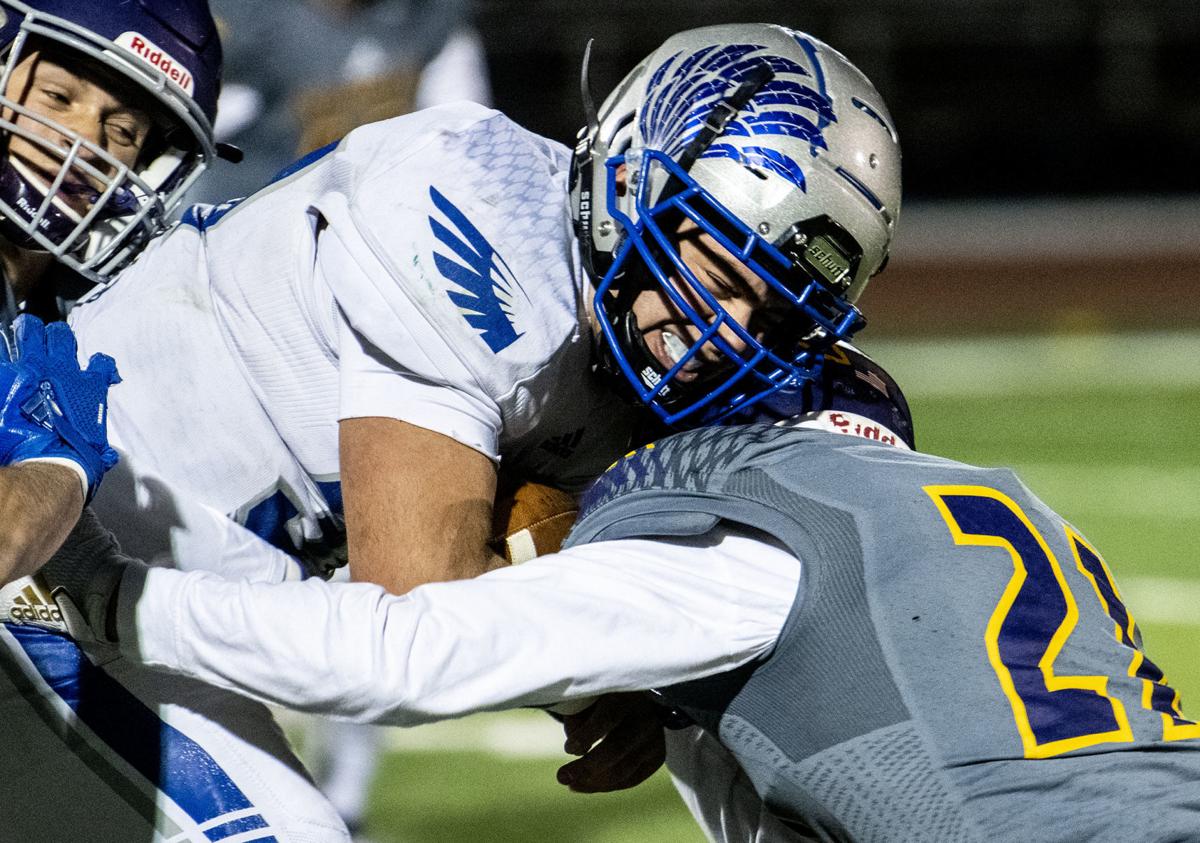 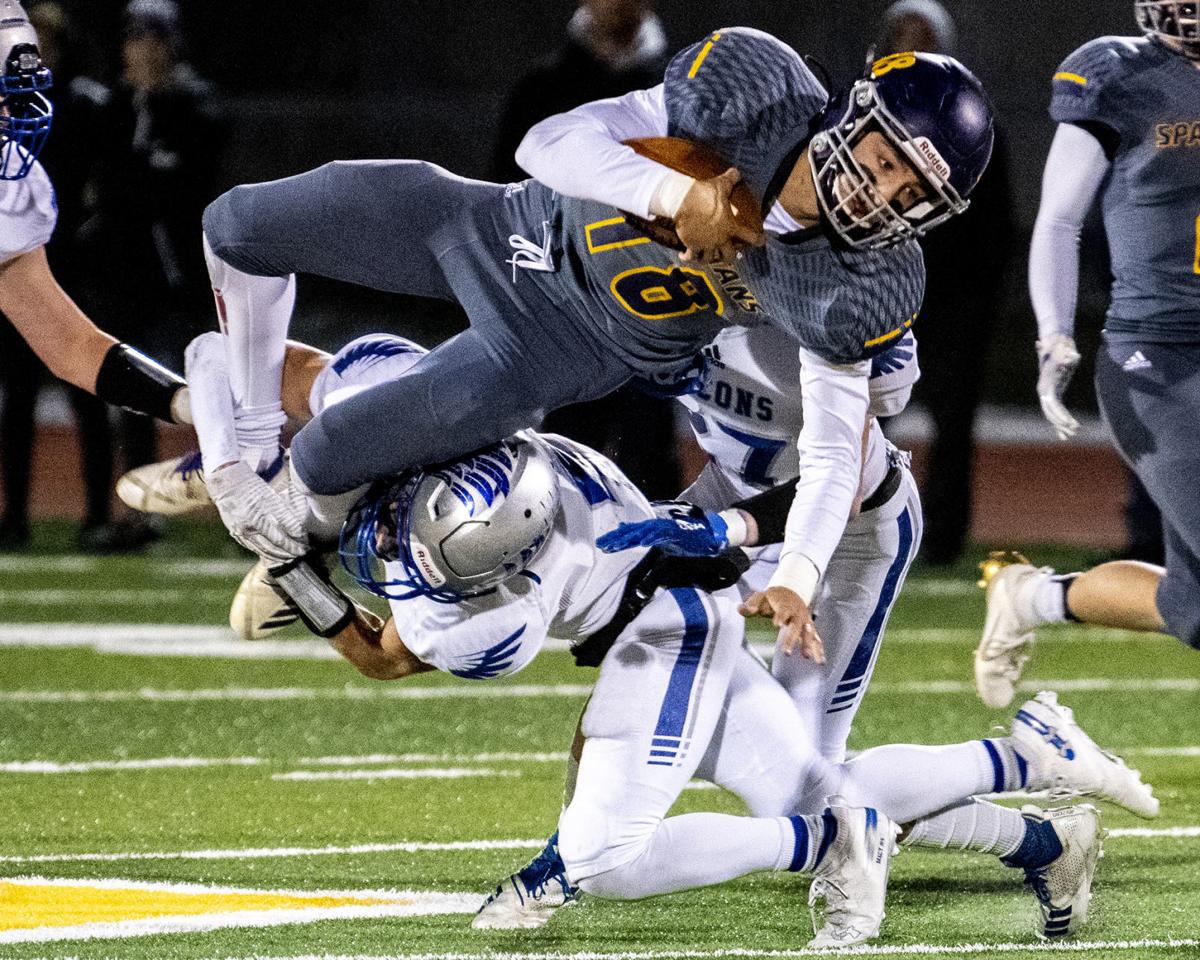 Missoula Sentinel's Jaime Jacobsen catches a pass in the end zone during the first half of the Spartans' game against Billings Skyview at Missoula County Stadium on Friday night. Sentinel won 45-7.

MISSOULA — Preston Jones is going to get three special teams helmet stickers next Thursday when Missoula Sentinel head coach Dane Oliver hands them out to his team.

Jones, a senior wideout and defensive back, took the opening kickoff of Missoula Sentinel’s 45-7 Class AA first-round playoff win over Billings Skyview back 86 yards on the Missoula County Stadium turf to give the Spartans a lead they would never relinquish on Friday night.

“I think it really set the tone for the game,” Jones said. “Especially since we caused a fumble and got the ball right back… that was a really big moment to set the stage for the rest of the game.”

From there, it was all Sentinel. The Spartans added a 3-yard touchdown run from Soren Syvrud and a swing pass from Bay to Caden Paulson to score twice more.

By the end of the first quarter, Sentinel led 28-0.

“Super pleased with the boys. We talked about it all week, to get on them early,” Oliver said. “It’s tough to get on a bus and ride six hours and play a football game. It was a deliberate strategy and something we emphasized.

The second quarter saw Sentinel begin to rest nearly all of its starters and quarterback Zac Crews relieved Bay. Crews, a sophomore who has seen time this year as a short-yardage quarterback, finished 7-of-10 passing for 52 yards and a pair of touchdowns. He also added nine rushes for 44 yards.

Bay had both of his touchdown passes in the second quarter, finding Jamie Jacobsen and Peyton Stevens for scores. Cam Dirnberger also added a 36-yard field goal for the Spartans.

“It’s a good start to the game, which you want,” Oliver said. “I was a little uneasy all week, just wanted to see how the kids respond and it’s very rewarding for the coaching staff to have a bunch of kids who care as much as they do.”

Speaking of caring, the best moment of the night happened early in the fourth quarter. Tristin Edwards, a senior for Billings Skyview who has arthrogryposis, which is a joint disorder, scored a touchdown for the Falcons.

He rumbled down the field as players, coaches and fans from both teams yelled their support. The score was for 89 yards and a wonderful moment for everyone inside the stadium.

“Very cool for him,” Oliver said. “I think about a kid who goes to football every day and probably hasn’t been in a game before. Just a neat moment for everyone in the stadium.”

Until the Saturday playoff game between Billings Senior and Missoula Hellgate is final, the Spartans will not know their next playoff opponent. The teams will be reseeded entering the state quarterfinals.

Sentinel should feel pretty good about its chances for a high seed, which will be based on strength of schedule and overall record.

But for Jones and the rest of the Spartans, they are simply happy to be moving on.

“It feels really good,” Jones said. “Last year was a big letdown and I’m happy to be back.”

The first-round of the playoffs got underway. See who advanced.